WAR OF THE REALMS #5 brings one step closer to a glorious finale. Jason Aaron’s masterpiece epic reminds us with every issue why crossover events were popular to begin with. 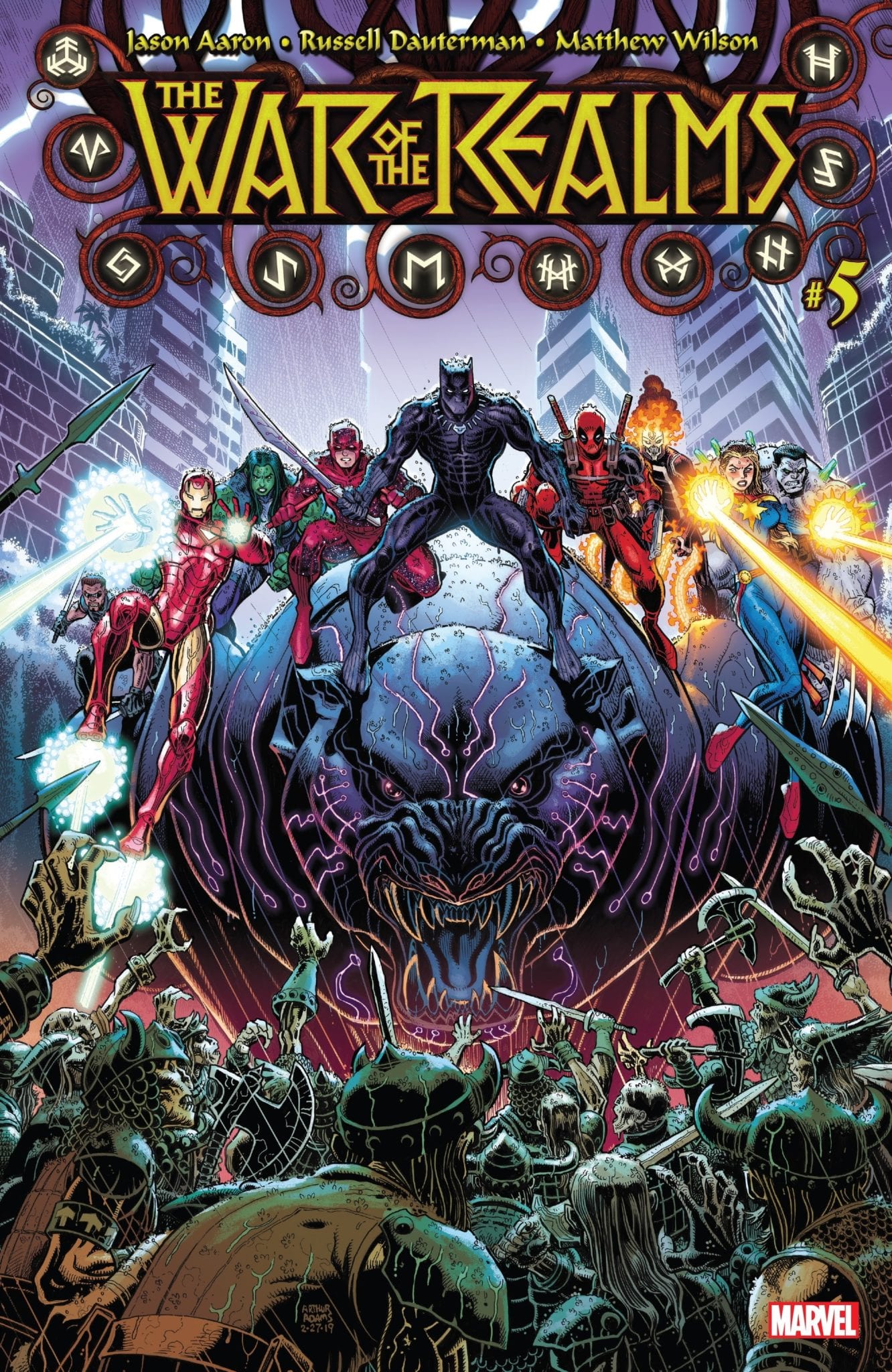 Malekith’s forces continue to wage war on the final realm, Midgard. The Earth’s mightiest heroes and company fight for the fate of the world. War Of The Realms #5 is loaded with tons action and surprises. This event continues to be a major home run for the creative team.

A few years ago when Jason Aaron wrote Original Sin, one of the biggest highlights of that story was the character pairings and team interactions. While the event itself may not have been the most memorable or epic, it was loaded with great dialogue and character interplay.

Jason Aaron extracted what worked well about that event and injects it into this massive epic story that he’s been building towards for years. On a major scale, War Of The Realms satisfies with epic action and grave stakes. On a smaller scale, it’s loaded with charming and memorable scenes between characters that we adore.

It’s not just about the pairings this time and the dialogue between them this time. It’s about how all the heroes of this universe come together and unite as a front against overwhelming odds. Along the way, we get these abstract collaborations and team-ups that should bring a smile to any Marvel fan. 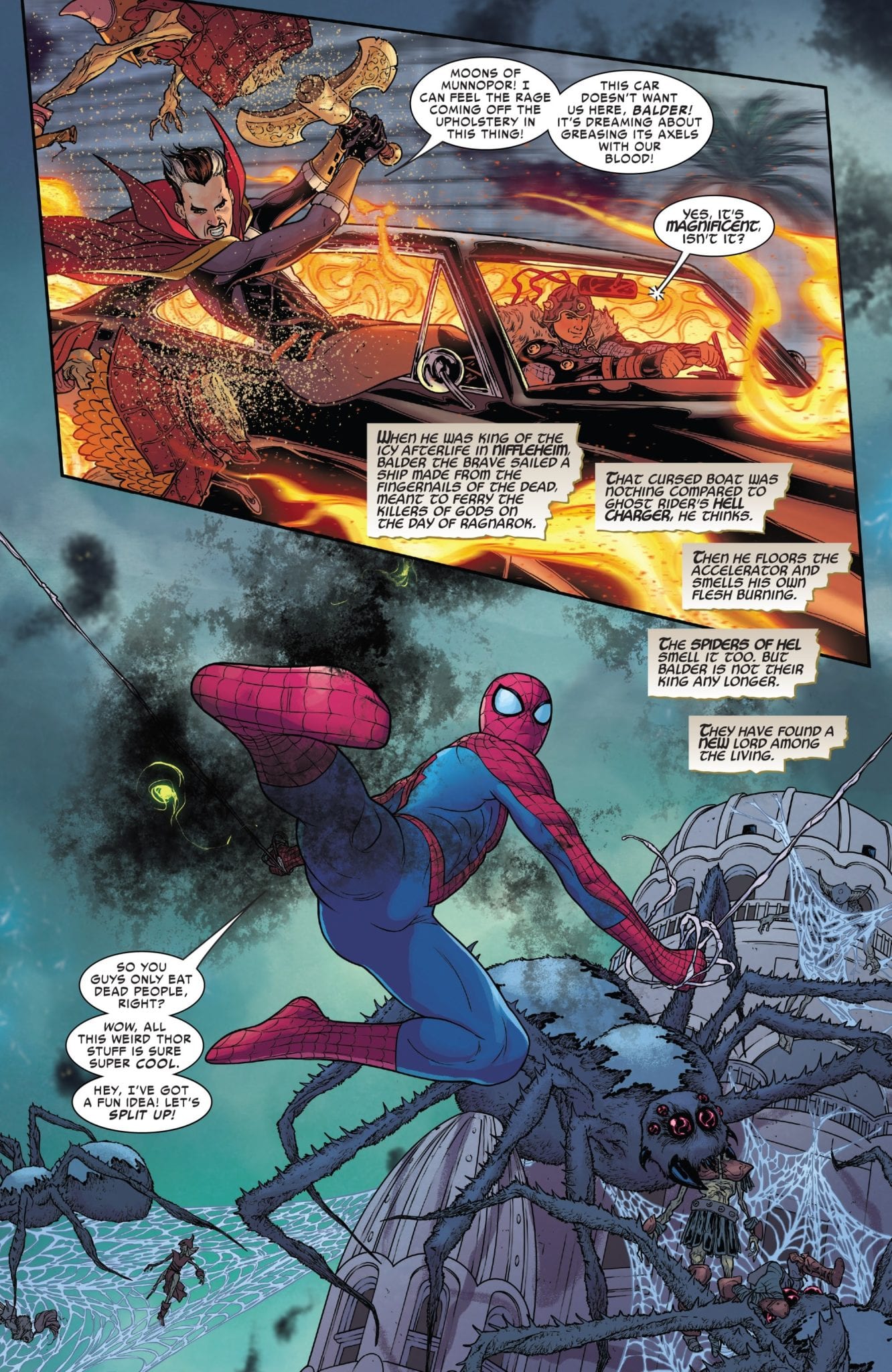 Moments like Spider-Man leading “The Spiders Of Hel” or Wolverine joining the Warriors Three are satisfying quick bits that fans will remember fondly long after the event concludes. Jason Aaron creates these insane scenarios and takes time to have characters like Spidey be in awe of how bizarre and awesome the world they live in is.

It’s impressive that Jason Aaron is able to have his cake and eat it too as far as Thors are concerned. We have a triumphant return for Odinson as he returns to form in glorious fashion. We also have the continuing saga of Jane Foster as a nonstop force of will and determination.

Jane Foster’s new role as All-Mother/Valkyrie doesn’t come across as the usual re-purposing of a character that was momentarily holding a superhero’s mantle. The journey Jason Aaron has taken Jane Foster on has been both satisfying and rewarding.

Colorist Matthew Wilson fills the backgrounds of each and every battle scene with glorious movement and action. Up front we have fleshed out characters, blushing with exhaustion and anger through the blended colors. Fires burn bright and the ensuing chaos explodes off the page, Wilson is the perfect extension of Dauterman’s illustrations. 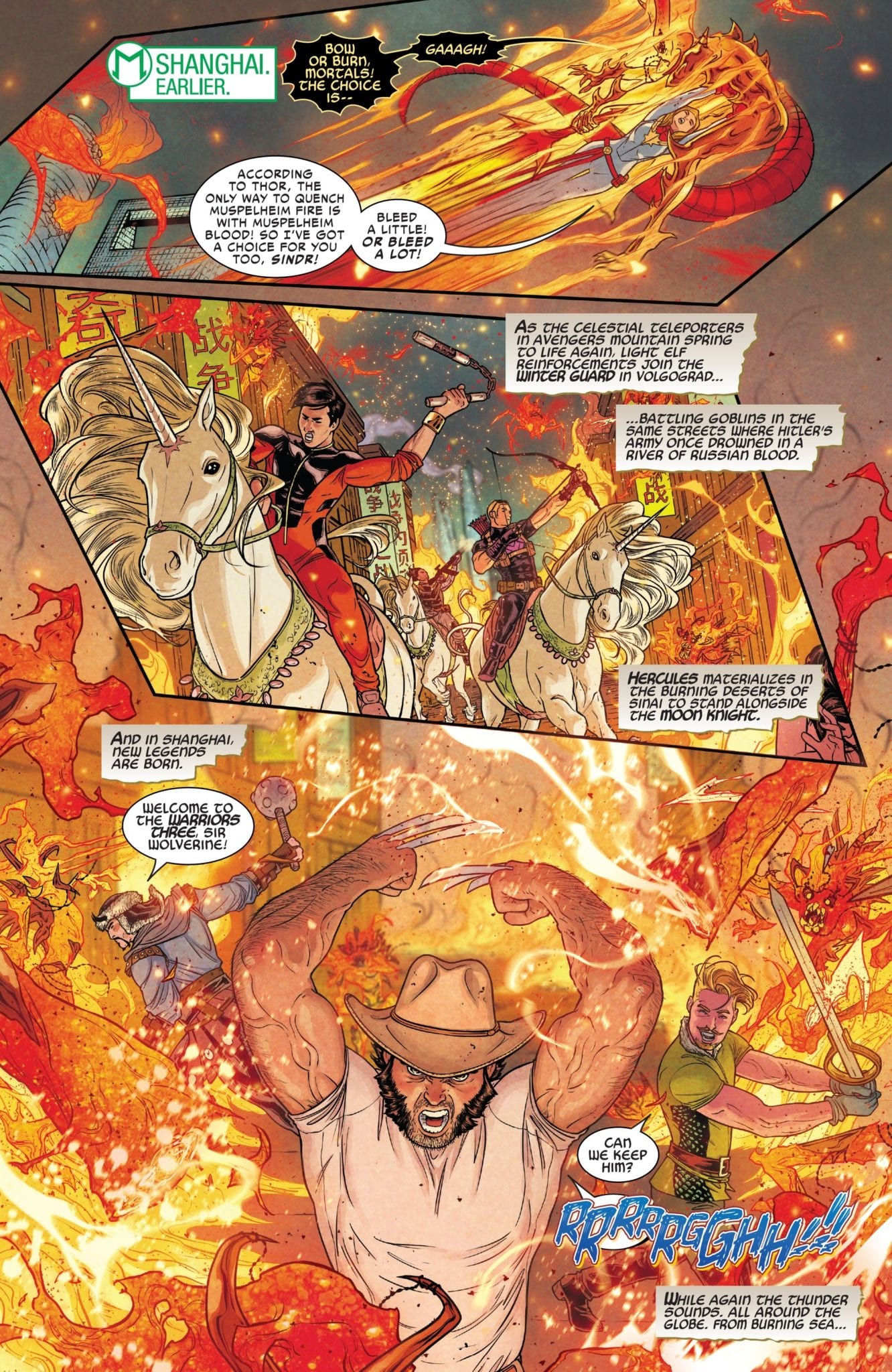 Artist Russell Dauterman does a lot of interesting panels utilizing depth perception and a blurry effect that look wonderful. There are a few characters that he doesn’t have the best eye for yet but that barely matters when he has such a huge cast to work with. Dauterman’s action scenes hit hard and his dramatic panels carry plenty of weight.

Dauterman has also shined brightly when it comes to the violence and gore of the series. Handing a bunch of Asgardian weaponry over to Earth’s mightiest, and heavily featuring Frank Castle, yields a lot of bloody action and Dauterman has delivered on every brutal blow.

Ultimately, what makes War Of The Realms succeed where so many Marvel/DC events have failed over the past decade or so is inclusion. This story affects every single corner of the 616 universe, but doesn’t shake the makeup of the universe. It’s a good old-fashioned fight against the forces of evil to save the universe.

Rather than taking an entire reboot of a publisher’s whole line to have a united front, War Of The Realms unites the whole Marvel line against a single enemy. It doesn’t feel forced or fabricated because it’s a threat that’s slowly been developing over years and not just some new big-bad who knocked out the previous big-bad.

There’s a palpable sense of comradery among these heroes, they’re facing this invasion together. From the main book to all the various tie-ins, so much is happening out in the open. This isn’t a story of secret missions, this is a public stance to save our realm. The story isn’t complicated or trying to say much other than that comic books are still fun.

It’s exciting to see all our favorite heroes, as well as the lesser-known, step-up and do what they do best. Malekith and his forces are also a familiar and interesting threat, not just faceless hordes of enemies. Each ally of Malekith is a faction or figure prominently featured in a Thor story at some point.

War Of The Realms is a return to form for Marvel events, it’s an instant classic that just has fun being a Marvel comic book. This should be the blueprint for large-scale comic book crossover events going forward; hopefully DC is paying attention as well.

WAR OF THE REALMS #5 And Why This Event Is A Cut Above The RestWAR OF THE REALMS is a return to form for Marvel events, it's an instant classic that just has fun being a Marvel comic book. This should be the blueprint for large-scale comic book crossover events going forward; hopefully DC is paying attention as well.