WAR OF THE REALMS rages on with issue #4 in spectacular fashion. Jason Aaron and Russell Dauterman’s chemistry continues to elevate this event to a place that Marvel hasn’t had any real estate in for some time. 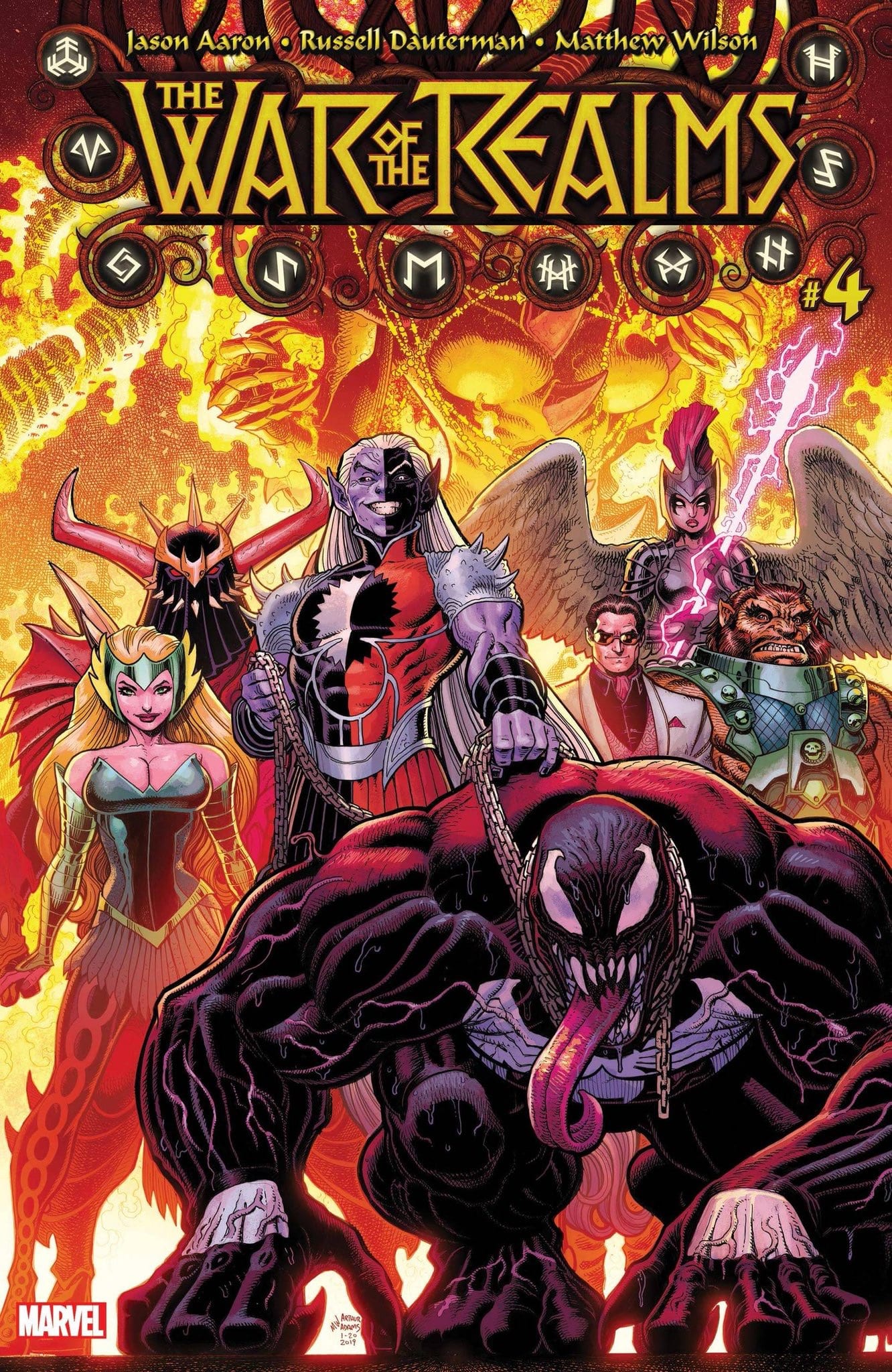 War Of The Realms has all the makings of a memorable Marvel event. Malekith is a truly menacing villain who poses a real threat, the stakes are fully realized. Pivotal moments like Daredevil becoming the guardian of the Rainbow Bridge and Odin becoming the “Iron All-Father” actually matter and provide a larger than life spectacle that won’t just leave your brain once you turn the final page.

Even just Malekith’s choice of weaponry is memorable and iconic. Turning the Venom symbiote into a weapon and commandeering the Ebony Blade are creative and highly entertaining ways to level him up.

Not to mention how grand and gorgeous the design and layout of everything is. We navigate through multiple realms and battlegrounds, with multiple teams and strike forces, yet we never get lost or overwhelmed. War Of The Realms succeeds where so many ambitious crossover events have failed in recent memory.

There’s also another layer of satisfaction for readers who have been in on Jason Aaron’s godly Thor run this whole time. It’s not a requirement to have read the years worth of material leading up to this event, but it definitely adds to your enjoyment. Once this story is over, whether you’ve read it or not, it’ll definitely be worth going back to see the incredibly long journey Jason Aaron has taken us on. 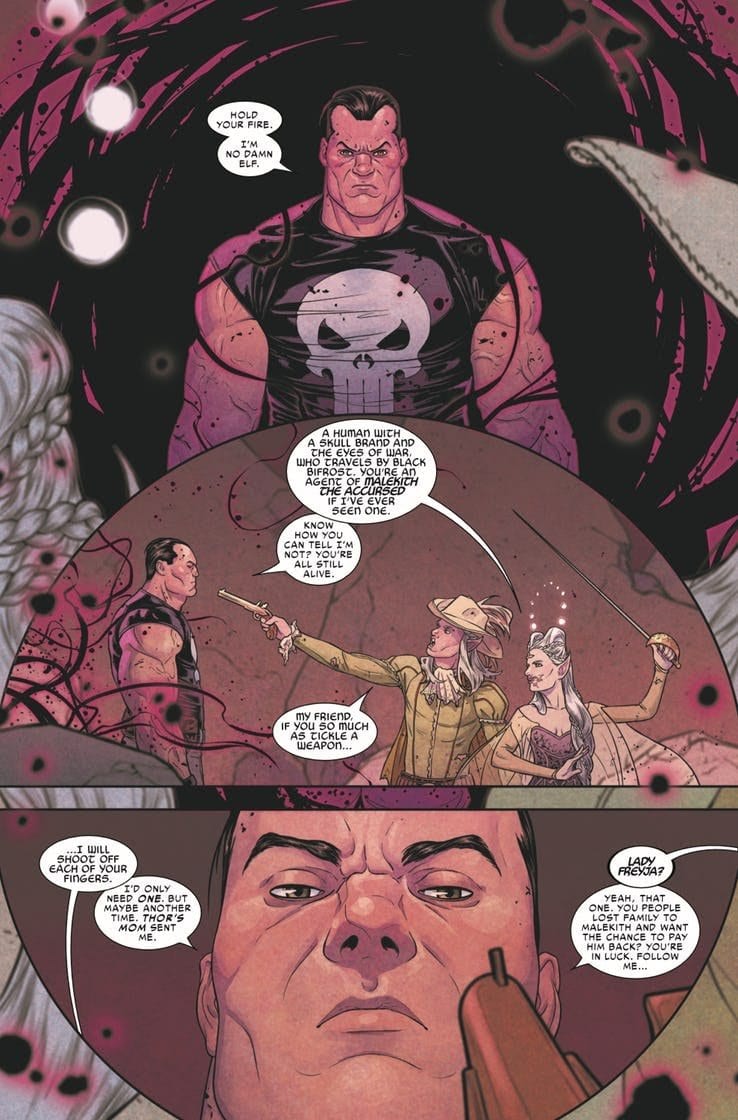 Freya and Odin’s stand against Malekith is a special moment born of relief and patience. Their banter and sacrifice is satisfying in both execution and build-up. It’s not a couple you would think could deliver this kind of heartfelt moment as a couple but Aaron is able to flawlessly extract and display their best versions.

Aaron has both Thor and Jane Foster leading the charge against Malekith and his forces, and it shouldn’t be any other way. If this is to truly be the penultimate chapter to his historic run, it should be those two that we follow into battle.

Now with his new Destroyer arm to go along with his newer look, Jason Aaron and his art teams are going to be responsible for all the best Thor action figures and statues of the foreseeable future.

Every big moment, reveal, and cliffhanger carries the weight that it needs to in order to push the story forward in a way that will have readers pining for the next issue. Jason Aaron appears to be applying lessons learned from his wonderful Avengers run in how to make each issue end with an exclamation point for all in the enormous cast. 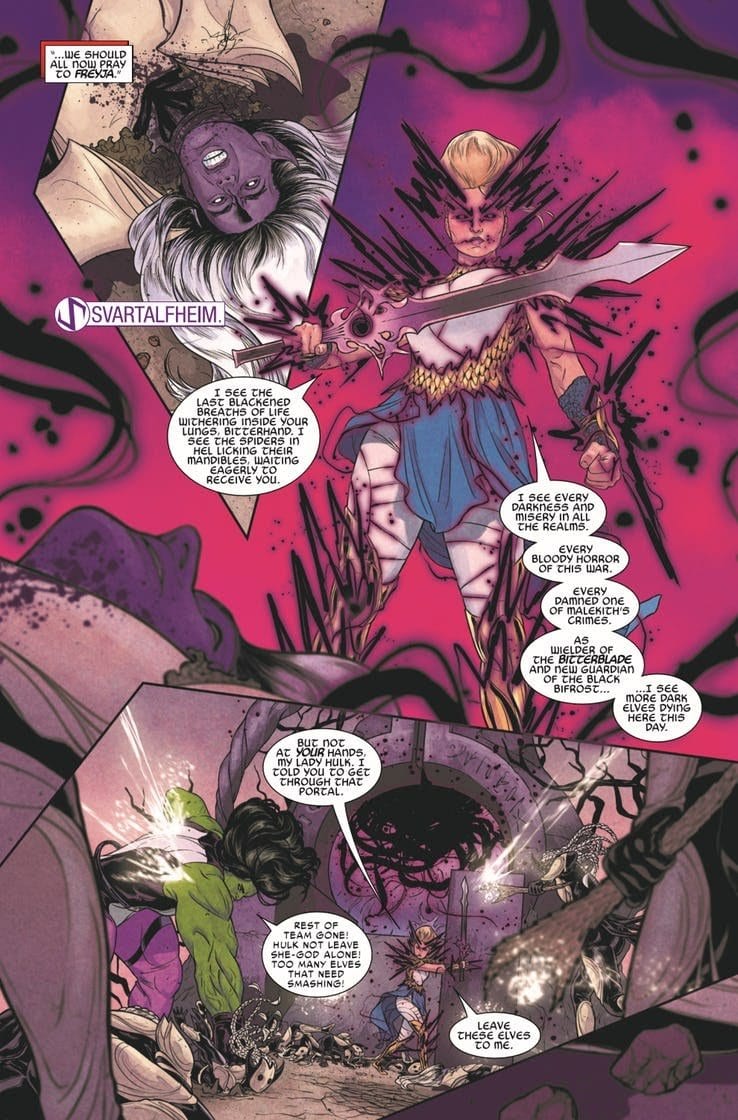 Russell Dauterman continues to dazzle with each issue, delivering the proper scope and scale required to elevate this story to the level it deserves. He injects so much charm, personality, and emotion into these characters and pages that gives every moment additional impact.

The Punisher’s biceps may look like they’re about to explode, but this issue is so much fun that you barely notice. Freya and Odin both look fantastic in their WOTR redesigns and their final stand is the biggest emotional moment of War Of The Realms #4 thanks to Dauterman’s ability to bring Aaron’s script to life.

Matthew Wilson does an exceptional job unleashing a huge array of satisfying color landscapes on readers. Our ability to navigate the chaos and multiple environments comes from Wilson’s coloring leading our eyes exactly where they need to go.

As far as coverage and marketing goes, War Of The Realms may not seem as crucial as it should be within the comic book community, but that may be an advantage. There isn’t the pressure that comes from the “EVERYTHING WILL CHANGE” marketing strategy beforehand.

If C.B. Cebulski is smart, he’ll keep Jason Aaron at the creative helm for major Marvel projects and titles in some capacity. War Of The Realms is the real deal.

This might be the best Marvel event in over a decade. Civil War was way back in 2006, that was the last time that a massive event and all it’s tie-in issues were both worth reading and crucial to the overall story. Obviously it’s completely subjective but so far War Of The Realms at the very least stacks up well against the likes of Secret Invasion, Siege, Infinity, Secret Empire and Secret Wars.