As AMC’s The Walking Dead comes back this Sunday, February 14th, here’s a quick recap of where everybody is leading up to this episode.

MONSTER HOUSE
Rick – Still the de facto leader, mostly just because he’s the only one that can think of things to do under pressure. He still doesn’t care much for the people of Alexandria, aside from Jessie, who he’s sleeping with, and Deanna, who’s now gone. Now that Alexandria’s fallen apart, expect him to get grouchier and to grow his beard back.

Deanna – Was going to die from zomb-itis. Instead, she shot up a couple walkers and died like a pro. Made her big, meaningful goodbyes to Michonne and Rick, trying to guilt the latter into caring about the Alexandrian nobodies.

Michonne – She doesn’t do much this episode, aside from backing up Rick, receiving unnecessary advice from Deanna, and doing stuff with her sword that looks cooler than any promo I’ve seen for Into the Badlands.

Carl – Currently the most badass protagonist. Does not care about Ron’s feelings.

Ron – Has an attitude problem. Definitely not helped by watching Rick kill his dad last season. He doesn’t succeed in getting another character killed, like Nicholas, but the season’s still young. He’ll get his chance.

Jessie – Isn’t a fan of rocking the Zombie Gut Poncho. Tells her son to pretend to not be such a doughy pushover. Trying to show Rick that she’s a big girl now, and big girls don’t cry.

Sam – Cabin fever. Not eating food, listening to vinyl records like some dumb hipster. Seems most likely to get killed by zombies and/or Babadook.

Judith – A baby. Probably wet her pants at least a couple times.

GARAGE-PAIL KIDS
Tara – Girl power. May have watched her new boo get walked off the metaphorical plank into Zombie Ocean.

Rosita – Worried about Abraham. May not be a fan of how he & Sasha have been bonding.

Eugene – Really good Eastbound & Down impression. Hanging off Tara & Rosita like a parasite. How is he still fat? What is he eating?

FIGHT CLUB
Morgan – A better preacher than Gabriel. Waxes more self-righteous than morally upstanding. Told Carol that he wouldn’t let her kill Wolf-Man, so he knocks her out. Then Wolf-Man knocks him out. Because duh.

Carol – Not Morgan’s biggest fan. “I will kill you to kill him because I don’t want anyone else to die” needed a laugh track behind it.

Wolf-Man – You know, the dude sporting that Scarlet W on his forehead? You forgot they called themselves wolves? Yeah, me too.

“MY WIFE”
Glenn – Still alive because of bogus fan service. Trying to get back into the town that is no longer worth staying in. Hopefully will find a way to help Maggie get off the ledge.

Enid – Grating. Annoying and self-centered. She and Ron really are the perfect couple.

ON A LEDGE
Maggie – On a ledge. Likes Glenn and balloons.

POST-CREDIT CREW
Daryl – Just met the psychos he helped the loser crew get away from. Probably getting deja-vu from the Sons of Anarchy squad he ran with last season.

Sasha – So over everything and everyone. Will likely kill many more people that deserve to be killed. 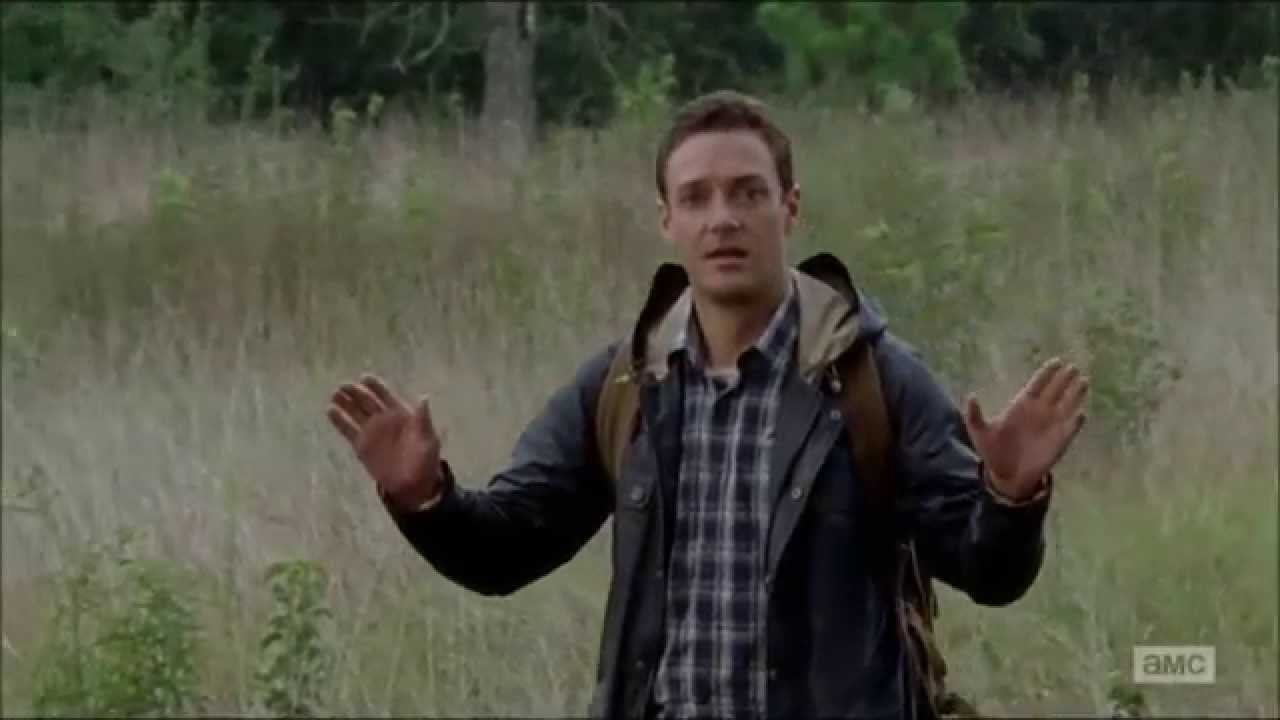 MISSING
Tobin – We saw him get walked offscreen briefly by Rosita and Tara. Whether that means he’s actually alive or not remains to be seen.

Aaron – Probably the best fighter of the Alexandria bunch, but is nowhere to be seen when his town is in danger. He will likely be back next episode, as will be the people mad that he’s gay despite the fact that it doesn’t affect them in the slightest.

Spencer – Probably on another wire being stupid somewhere. If he gets killed, it probably won’t be Rick’s fault, so hopefully Deanna’s ghost won’t haunt him too hard.