Thor and Loki: Double Trouble #1 is out on March 10 from Marvel Comics. Writer Mariko Tamaki depicts the titular Asgardian brothers’ intense rivalry with teenage levity. To bring that feeling of levity in cartoonish full is artist duo Gurihiru. Finally, VC’s Ariana Mahler as letterer makes every word on display have a sense of ironic weight to them.

Tamaki gives a quirky take on Thor and Loki’s relationship. These two foster brothers have always been bitter rivals, so going into their teenage years is a nice change of pace. Rather than rehash the usual cat and mouse game, Thor and Loki: Double Trouble #1 plays everything for laughs. Being teenagers allow the brothers’ attitudes to be a little more bearable and funny. Because who really wants to watch two adults get into one another’s business… again? Teens can allow suspension of disbelief a little easier, especially when depictions like these show humanizing flaws. 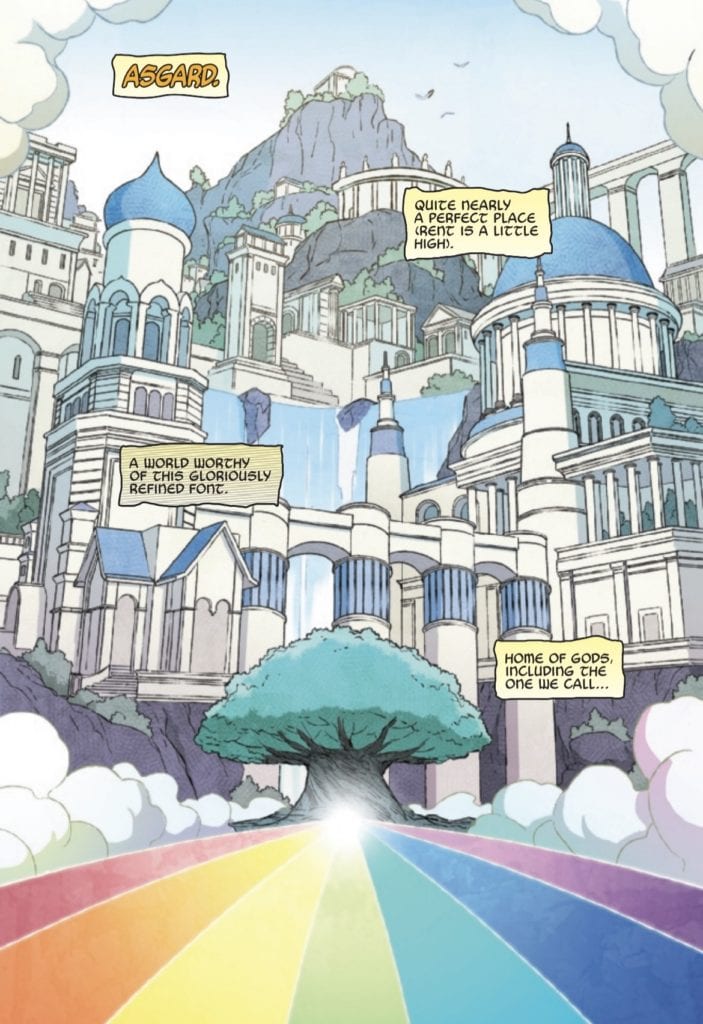 There’s a balance of being self-aware and self-conscious about the setting and characters. Introductions to Asgard make it out to be this practical paradise that prides itself on the classical font Asgardians in several series make use of. Thor likes to show off in his belief of being the strongest Asgardian. At the same time, Loki is always ready to play Thor’s ego against him so Loki can feed his own ego. Despite all of the legends and myths surrounding Asgard, the people living in it, including these brothers, are still people.

Gurihiru never strays away from depicting characters in humorous ways. Thor’s large frame and straightened facial features often make him look like the most notable person in view. Using Mjolnir and lifting a statue over his head is certainly a way to get the reader’s attention. To counteract his brother’s showboating, the lankier and round facial featured Loki often appears in Thor’s background. That is until the use of his magic and trickery has Loki steal the spotlight only to give it back to Thor to make him look bad. Annoy him enough by stealing an apple as a horse, Thor’s ready to attack. 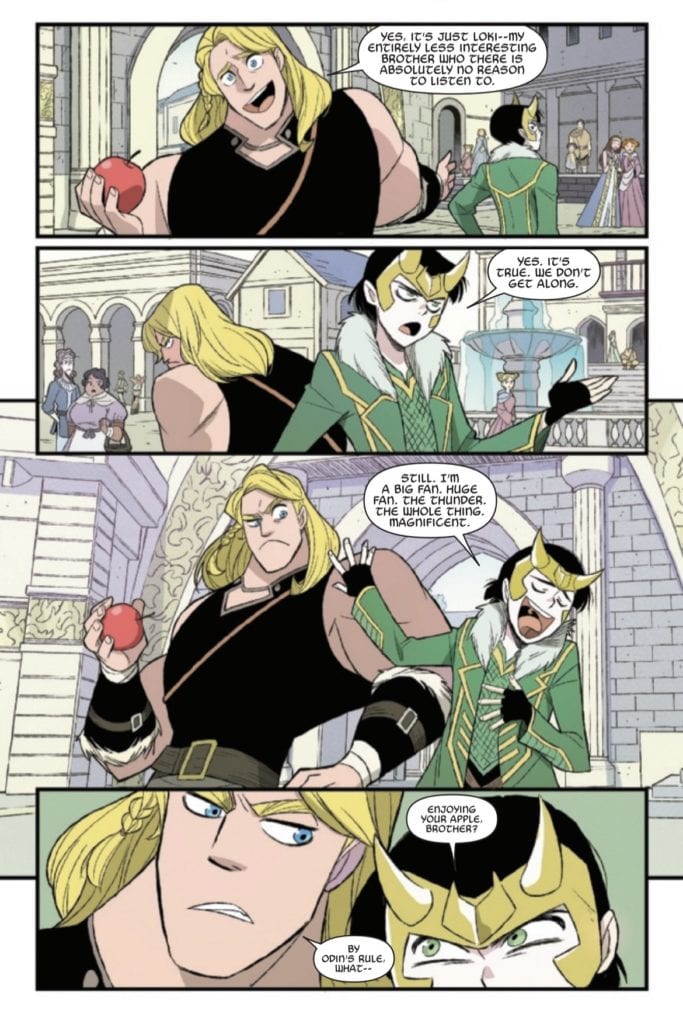 The lettering by Mahler never misses a beat in its presentation. Steady guidance through captions introduces the setting until a big introduction to Thor in bold letters. That’s a sequence that lines up perfectly with Thor’s character. So with Loki lacking any announcers, he has to do it himself. So what better way to steal Thor’s thunder than with a few slow-clap SFX as his introduction? His word balloons directly cutting off Thor only adds to this character dynamic.

Thor and Loki: Double Trouble #1 begins a series that will be a good pass time between all the bigger releases. Instead of big world-ending events, it’s nice to see Thor and Loki’s sibling rivalry with cartoonish flair. Heck being teenagers means they can get away with it without making themselves look too stupid.