Marvel Comics has been hinting a new book involving Kurt Busiek and Alex Ross, and now we know what it is. The Marvels will be hitting stores in May, written by Busiek and illustrated by Yildiray Cinar, with covers by Ross.

But what is The Marvels, exactly? The publisher describes it as “the biggest, wildest, most sprawling series ever to hit the Marvel Universe,” adding:

Telling stories that span decades and range from grand adventure to intense human drama, from street-level to cosmic, starring Marvel’s very first heroes to the superstars of tomorrow, Kurt Busiek and Yildiray Cinar’s THE MARVELS begins a new chapter in the spectacular 616.

Busiek spoke with Marvel.com about the book, with some highlights below.

On his initial pitch:

The whole idea of THE MARVELS is to be able to use the whole Marvel Universe—not just all the characters in it, but all the history of it. The sweeping scope of the whole thing. I think I described it to Tom Brevoort as something like a Tom Clancy thriller, in that there would be multiple threads of story going on, and those threads could come together and split apart again, or maybe never even meet—there could be characters involved in a story that do something important but never meet the other characters in the story, which will very much be the case in the opening storyline, at least.

On the genesis of the idea:

It’s been kicking around for a while, yeah. I think it started back when I was writing AVENGERS (1998), or maybe even earlier, and I’d hear people suggesting that Wolverine or Spider-Man or the Punisher or whoever was big at the time should be an Avenger, because they were big, important characters. And I thought they probably shouldn’t, not in AVENGERS, but that didn’t mean there couldn’t be a book like that anyway…

I talked to Tom about it way back then, about a book where you could use all the big characters at once, in big, expansive stories that didn’t require them all to be on the same team, or even be allies. And the best title I could come up with was THE MARVELS, which I thought might be confusing back then. 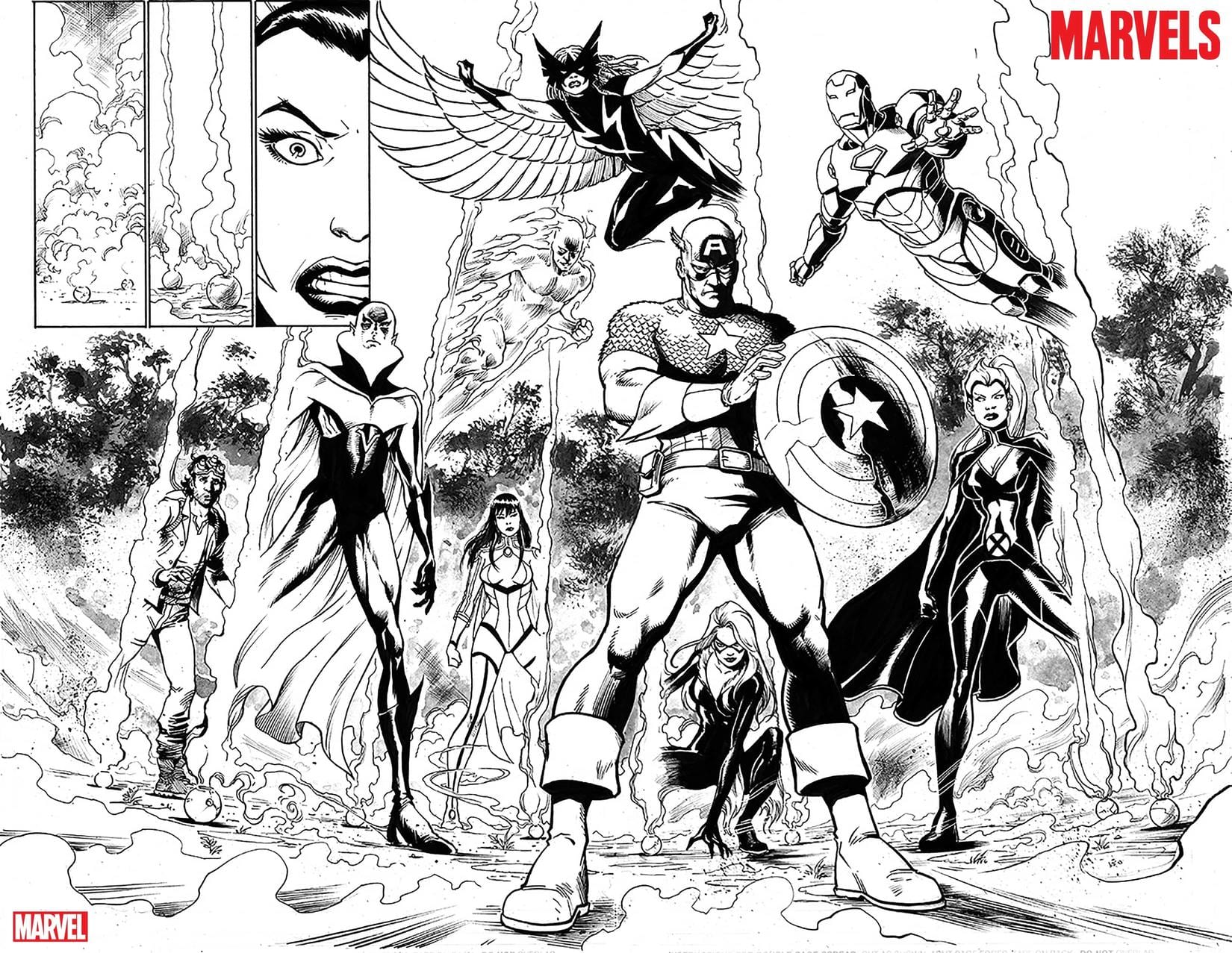 On which characters will be included:

We kinda wanted to go extra-big with the first arc, and show off the big sweep of it all, so we deliberately wanted to do something that involved characters from many areas of Marvel. Avengers, FF members, X-characters, someone from the Spider-side of things, and so on. To have a real crossroads feeling going on. We talked about, but didn’t include, Guardians of the Galaxy characters, but we can always get to them later.

And we’ve got characters from the distant past, like Aarkus the Golden Age Vision, and characters who are very new, like Aero… We wanted to make a statement about the size of it all.

I’ve been a fan of his since way back when he did an indie comic called Fist of Justice, and it’s been exciting to see him get better and better as he progressed to bigger and bigger stuff. And for THE MARVELS, we knew we needed someone who could draw whatever part of Marvel we threw at him, from gritty mean-streets stuff for a Punisher scene to hi-tech Super Heroes with the Avengers to cosmic oddities and ancient history and more. And Yıldıray can do all that and make it feel spectacular and active and human and quirky, all at once. He’s just ideal for the book, and it’s looking sensational.

You can head over to Marvel.com to read the whole chat. Look for The Marvels in comic stores this May.