The History of Shazam: From Fawcett Comics to the Big Screen

Since 1940 the World’s Mightiest Mortal has been fighting crime, but his journey through the years has been long and difficult. Several times Shazam has been off the comic book shelves completely, and this article is here to inform you about how the Big Red Cheese eventually found his way onto the big screen.

Shazam, originally sporting the name Captain Marvel, first appeared in Whiz Comics #2, which was published in 1940 by Fawcett Comics. Captain Marvel was a simple golden age hero but stood out among the rest because his alter ego was a ten-year-old boy. The child was able to transform between normal child and superhero by merely uttering the magic word Shazam. This secret identity allowed children to relate to Captain Marvel more than any other hero, and Fawcett comics was able to connect to even more people with the introduction of Mary Marvel and Captain Marvel Jr. After a short while, Fawcett introduced more fantastical ideas into their issues, which led to characters like Mr. Tawny, a talking tiger, and Hoppy the Marvel Bunny, who possessed the same powers as Shazam. This strange group of superheroes, combined with the fantastical adventures they went on, made the Marvel Family (no association with Marvel comics, which had not adopted that name at the time) a beloved superhero team. At one point, sales of Captain Marvel rivaled that of even Superman. 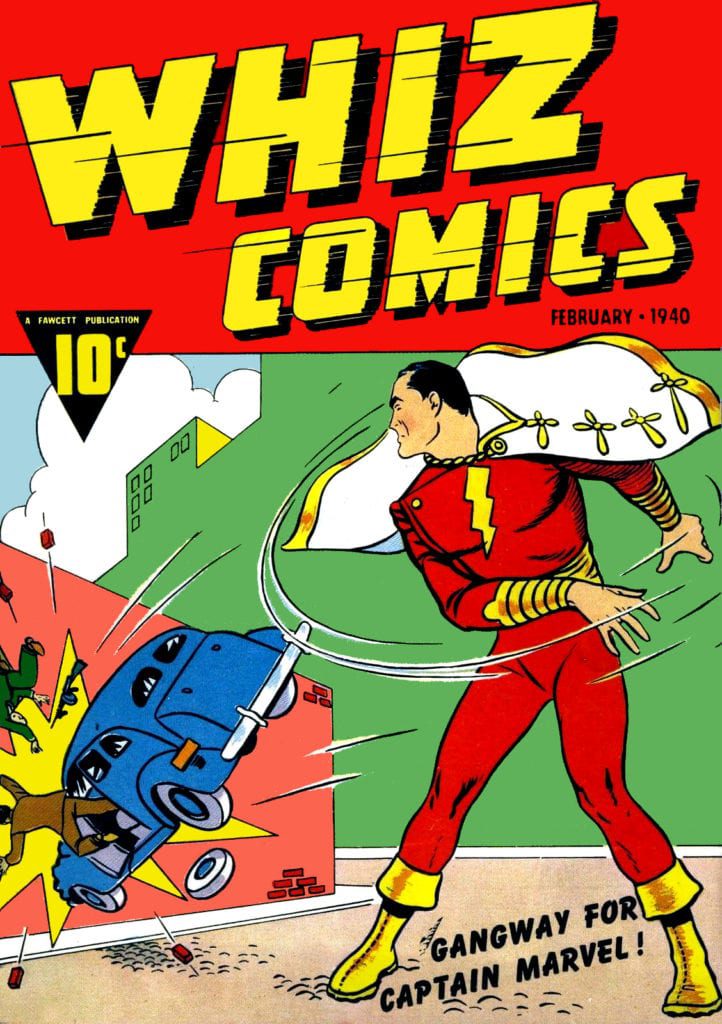 As Captain Marvel was in his prime, issues arose in the form of a lawsuit. National Comics (eventually to become the DC Comics we know today) sued Fawcett Comics because Captain Marvel was similar to Superman in too many ways. There were even instances where actions performed by Captain Marvel mirrored that of Superman in earlier issues, such as pulling an elevator up by its cable. The case was complex and took twelve years, cementing it as one of the longest-running legal battles in all of comic book publication history. National Comics emerged victorious, and the case resulted in Fawcett Comics being forced to cancel all superhero-related comic books, including those containing Captain Marvel or the Marvel Family. 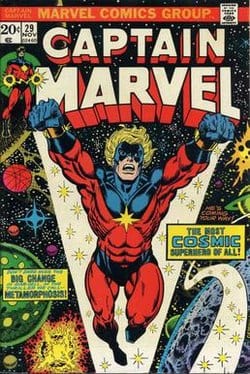 Even though Fawcett Comics was unable to publish anything containing the character, the original Captain Marvel — eventually to be known as Shazam — was far from extinct. In 1972, DC entered into an agreement with Fawcett Comics to license the Marvel Family of characters, and the world’s mightiest mortal found his way onto comic book pages again. However, due to Marvel Comics now possessing a character named Captain Marvel, the series that DC premiered in 1973 was entitled Shazam!: The Original Captain Marvel. Marvel later forced DC to change the subtitle to The World’s Mightiest Mortal, resulting in the character’s name appearing nowhere on the cover of each issue. This eventually led to people referring to Captain Marvel as Shazam, and was what caused his name to eventually be changed. 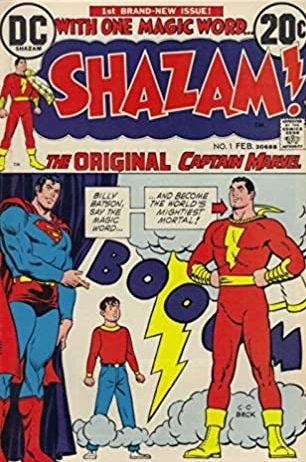 The 1973 series Shazam!: The World’s Mightiest Mortal initially had C.C Beck doing the art. He was the artist of Captain Marvel in the Golden Age, so the new series continued to have a feeling of Golden Age comic books well into the Silver Age. This archaic art style turned many off from the new series, and even the creators had a distaste for what they were publishing. This series also made it so that the Marvel Family existed on Earth-S, separate from DC’s Earth-1 main continuity. Despite only lasting 35 issues, the 1970’s revival of Shazam was important because it marked the first time Captain Marvel returned to the page when he could have been left unused forever.

Shazam made several appearances in the late seventies and eighties in series such as in Justice League and All-Star Squadron, but never got a series of his own. He played a role in Crisis on Infinite Earths, which also brought Captain Marvel from Earth-S to the main continuity.

In 1994, The Power of Shazam! written and illustrated by Jerry Ordway was released, bringing back the beloved character in a new art style similar to mainstream comic books at the time. The graphic novel led into an ongoing series of the same name, which was a more realistic version of Captain Marvel than we had seen before that still managed to bring the fun and fantastic characters from the golden age into play. Throughout the series, Hoppy the Marvel Bunny, Mr. Mind, and several other goofy characters made appearances in a more realistic setting. This revival of the character is some fans’ favorite portrayal, and it is well deserved. The series ran until 1999. 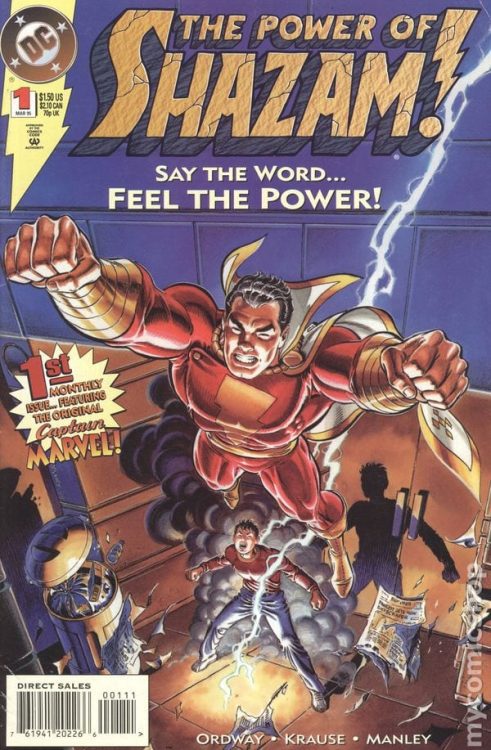 After the cancellation of Power of Shazam!, it was a while before the hero saw a series of his own. In the early 2000s, Shazam made appearances in JSA, Infinite Crisis, and 52 without very significant roles. He was also featured heavily in the 12-issue maxiseries Justice, but it wasn’t until the maxiseries The Trials of Shazam! that the Shazam family was the focus of a story. This series had Captain Marvel take on the role of the Wizard, and focused on Captain Marvel Jr. attempting to pass certain trials to prove he could become the new hero Shazam. This maxiseries made many changes to the Shazam lore, but sadly very few had a significant effect because DC continuity was rebooted as a result of the New 52 rebranding.

After the New 52 relaunch, Shazam was not given a series of his own, and initially did not seem to exist in the new continuity. Luckily, in the back of issues of Justice League, fans were treated with a new origin for the world’s mightiest mortal. This time, several changes were made to the origin of Shazam, including a much larger cast of supporting characters, more people who can summon the magic of the wizard, and officially changing the name of the hero to Shazam. Many had already been referring to Captain Marvel as Shazam, so the name change was expected. Written by Geoff Johns, the new origin brought freshness to the character and introduced him to many readers who were unfamiliar to the character.

In 2019, the film Shazam! arrived in theaters. Directed by David F. Sandberg and starring Zachary Levi, the movie heavily reflected the origin set forth by Johns during the New 52. The most prominent change of the film, other than Doctor Sivana being the main villain instead of Black Adam, is that Shazam is now incapable of saying his own name. In the Johns story, he added a clause that Shazam needed to say his name with meaning to transform, but in the movie any attempt made by Shazam to say his own name will result in him transforming back into Billy Batson. 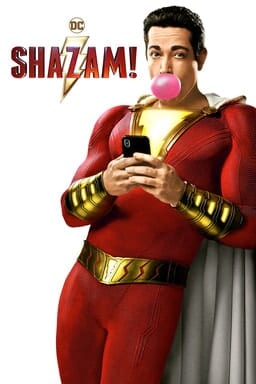 Currently, Shazam has his own ongoing series started in 2018 and written by Johns, which will hopefully continue for many years. Johns has slowly introduced new ideas to Shazam lore, while also bringing back beloved characters and villains for the whole Shazam Family to interact with.

What’s your favorite appearance of The Big Red Cheese? Leave your answer in the comments below!