THE AMAZING SPIDER-MAN #1 hits your local comic book store from Marvel Comics this week, relaunching the series for Spidey’s 60th Anniversary. The book is written by Zeb Wells, with art by John Romita Jr., inks by Scott Hanna, colors by Marcio Menyz, and letters by Joe Caramagna. As a long-time reader of the series who had taken a break, I was excited about this relaunch and looked forward to a fresh start with the series.

ASM #1 reminds me of the first time I picked up a Spider-Man comic book. I had no clue what was going on, but I loved the presence of Peter Parker and the wit of Spidey. Part of the fun of randomly jumping into a series is going back to read older issues so you can fill in the gaps in the story. Wells put enough in ASM #1 to intrigue me to want to go back and read more. On top of that, the last few pages make me want to read the next issue. ASM #1 is an excellent setup for a new season of adventures; all the plot threads are dangled, the conflict is building, and there are a few side mysteries to keep you guessing.

Romita’s art isn’t for everyone, but it is a style that grows on me the more I read. By the third time I read ASM #1, my brain had adjusted to Romita’s style, and I could feel the movement of the action. Romita does well with menacing characters, and Tombstone is an intimating beast. The way Romita draws Tombstone elevates the conflict and excites you for the first time Spidey and Lonnie face off.

I did notice some interesting ink work in Spider-Man’s costume from Hanna. It takes most of the blue out of the suit; a few panels reminded me of early 90s Erik Larsen, where the suit was black and red. My favorite panel of the issue is a combination of Romita, Hanna, and Menyz complimenting each other. The panel is a third of a page, and Spider-Man is dropping down onto a moving car filled with henchmen and the White Rabbit. The symmetry of the panel is perfect, and the motion of the colors works very well. The absence of an onomatopoeia adds to the stealth of the scene.

Menyz’s color work is all over the spectrum as ASM #1 covers so much ground. There are several pages where Menyz uses the colors to frame your focus on the story and direct your eye to the next panel (check out the two panels below). The opening page of purple and gray works very well to convey the moment’s desperation. This soft tone of colors is carried throughout the book and works well to complement Tombstone’s soft speech. The combination adds an underlined tension to the story. 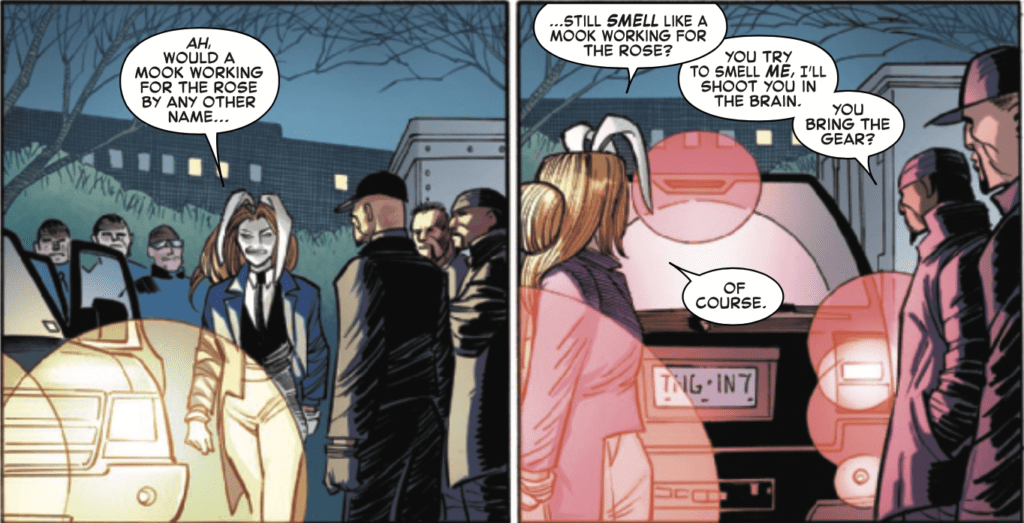 There is a ton of action and explosions in ASM #1, and Caramagna handles the onomatopoeia workload solidly. The action words are bold and in your face. There are a couple of pages of great “Z” formation of word balloons, which help your eyes coast over the page and absorb the moment. There is one page, though, where Caramagna uses two different fonts for the “THWIP.” It took me out of the moment as I was trying to figure out if Spider-Man was doing something different with his webbing (overanalyze comics much?). But my favorite panel of Caramagna’s work is a half-page explosion, where the “BA-DOOM” covers the whole panel but still lets the art breathe.

Overall, THE AMAZING SPIDER-MAN #1 is a fun book with a solid creative team that may encourage new readers to dive into the back issues.

Check out a five-page preview of THE AMAZING SPIDER-MAN #1 below: