SUPERMAN: RED AND BLUE #1 – Painting The Colors Of Humanity

Superman: Red and Blue #1 is DC celebrating the boy scout in blue and his humanity. Each story has a down-to-earth vibe to emphasize the man over the super, even in boyhood.

The first story of Superman: Red and Blue #1 does not have a title as writer John Ridley makes a point about Superman’s conflicting emotions. This story is a reaction to a World’s Finest Silver Age comic, where Superman was at the mercy of a Soviet internment camp. It’s an event that makes him sweat as much as moving a planet with all of his might. Now in his civilian identity, he’s interviewing the man who tortured Superman for months and the reader shares Clark Kent’s trepidation.

Artist Clayton Henry makes clever use of his illustrating and inking techniques where objects and characters in bolder lines hold weight. The red and blue coloring by Jordie Bellaire is what brings out the emotional stakes. Finally, Dave Sharpe gives allows lettering moments that need to sink in to take up space on the page. It’s what allows the reader to experience Clark’s nervousness.

The Measure of Hope: The Man For Tomorrow

Brandon Easton writes this section of Superman: Red and Blue #1 about how Superman inspires people but has human flaws. A fan asks Superman to appear at his mother’s funeral after a lifetime of following Superman’s example. But even Superman can’t be everywhere at once and he arrives late. If anybody’s ever felt like they never have enough time to do important things, this story might resonate with them.

Steve Lieber makes every important character stand out with bolder lines against the background, even sheets with the Superman logo. The colors by Ron Chan showcase emotional states. Characters colored in both red and blue showcase people in personal conflicts. Even the lettering captions demonstrate this conflict, the red captions of the fan’s mother echo in juxtaposition with the fan’s blue captions.

The Boy Who Saved Superman: Premiere Superman Red and Blue #1 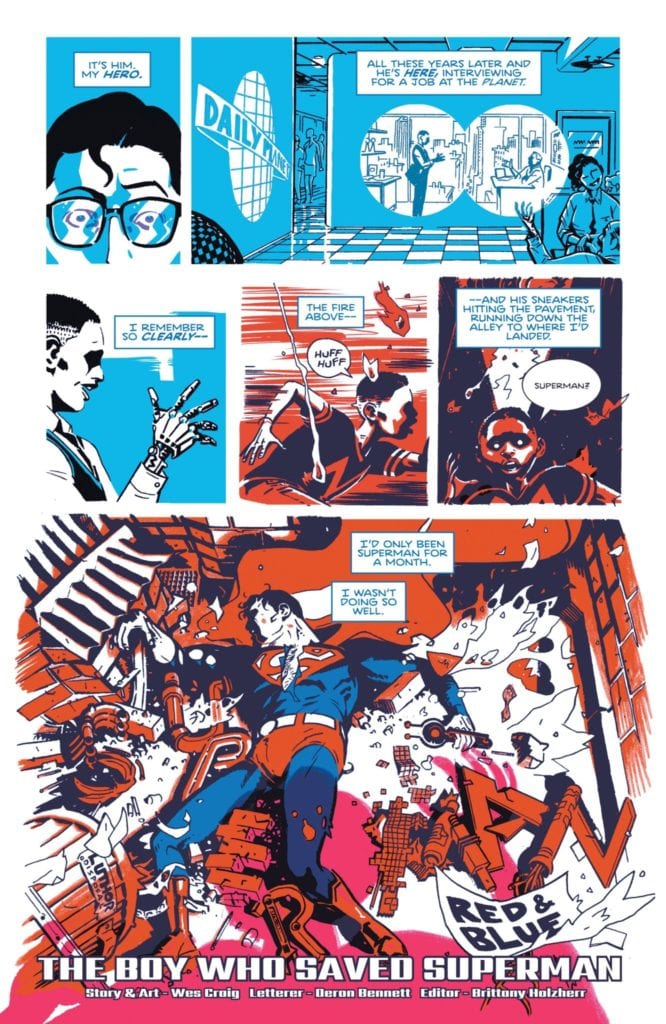 Wes Craig depicts arguably the best story of Superman: Red and Blue #1 by showcasing someone Superman admires. The titular “boy” isn’t some famous writer or war hero. He’s just a regular person who, despite the risks, tries to help Superman when he’s hurt in battle. Through this readers find that Superman admires people like them as much as they admire him.

Craig’s art is extremely expressive in both character and setting. The look of surprise on Clark’s face is what gets readers undivided attention, along with his internal dialogue from Deron Bennett. Within the conflict are a large amount of panels that shift in size to express how chaotic the situation is. Combining with all of the colors, this makes the calmer situations in the Daily Planet feel like a moment of relief.

This section of Superman: Red and Blue #1 serves as a juxtaposition against DC’s Batman anthology. Dan Watters gives this plot a silly start, a fifth-dimensional imp steals the world’s colors as well as people’s concept and feelings about color; like red representing the passions of love and war. So when Superman has the opportunity to put everything back, he’s conflicted as he could restart many of the world’s problems. Batman thinks that color should be locked away until Lois reminds Superman that black-and-white is Batman’s domain.

Dani gives this story a very simple aesthetic to demonstrate the story’s conflict. Every page features very simple lines to illustrate the shapes and characteristics of the setting. Batman’s cape and cowl makes him stand out when he and Superman are in the same room. This brighter Sin City aesthetic gives way to warmer and cooler colors when Superman gives the color back. It makes the world feel more lively despite the potential trouble.

On a smaller note, Sharpe comes back to give the words spoken some character. The imp speaks with a unique font in outlined word balloons, to further emphasize his otherworldliness. Lois’ captions meanwhile have a style with a fancy starting letter to promote her ability as a writer. It’s like she’s writing an article for the Daily Planet to make sure the events of the story are recorded.

The School of Hard Knock-Knock Jokes

The final section of Superman: Red and Blue #1 has Marguerite Bennett depict how the lessons of Superman’s parents shaped him. At only five years old, Clark has a lot of concern about his kindergarten days. The reader feels sympathy for Clark in how he expresses his concerns in showing off his powers. Trying to fit in is a struggle and trying to be friends with lonely and unpopular kids, for fear of losing new friends, is outright terrifying. The lessons from Ma and Pa Kent about inclusion feel so powerful.

Jill Thompson’s art, with its extremely detailed illustrating, shading, and coloring, is all very enticing with Clark’s bright colors guiding readers throughout the section. When Clark looks at the world from a frightening upwards angle, some brightness changes everything. The red sound effects like a child’s laugh and parents’ smooching from Troy Peteri enhances that feeling of brightness greatly.

Look Out For Superman: Red and Blue #1

Superman: Red and Blue #1 serves as a great way to introduce new and old readers to the Man of Steel. By putting reader’s behind the eyes of Clark Kent, his humanity really shines through. The Boy Who Saved Superman displaying Superman’s admiration for the common man hits similar notes as recent hit Soul. It all reminds fans that behind the sensationalism is a man to relate with.

Superman Red and Blue #1 gives new and old readers a chance to look into the many layers of Superman's humanity. No matter the eraSUPERMAN: RED AND BLUE #1 - Painting The Colors Of Humanity