Brian Michael Bendis is making his case with each new issue of Superman for Clark Kent’s reveal. In Superman #21, written by Bendis, pencilled by Ivan Reis, with inks by Joe Prado and Oclair Albert, colors by Alex Sinclair, and letters by David Sharpe, we see more of the fallout of Clark’s decision. And right when things start seeming too complicated with planetary politics, the creative team brings us back to Lois Lane. With this issue being told on two fronts, we get to see what the space battles are causing on Earth.

Bendis makes one brilliant choice right out of the gate. As Superman flies around space, fighting Mongul and trying to keep the peace between planets, Bendis focuses back in on Lois Lane. While much of what Superman does in this issue seems too large to relate to, Lois’ life provides the way in. We see her deal with Daily Star reporters and begin to come to terms with how her life is changing. It gives us a real-time, down to earth example of how the Man of Steel’s actions is affecting life on earth. 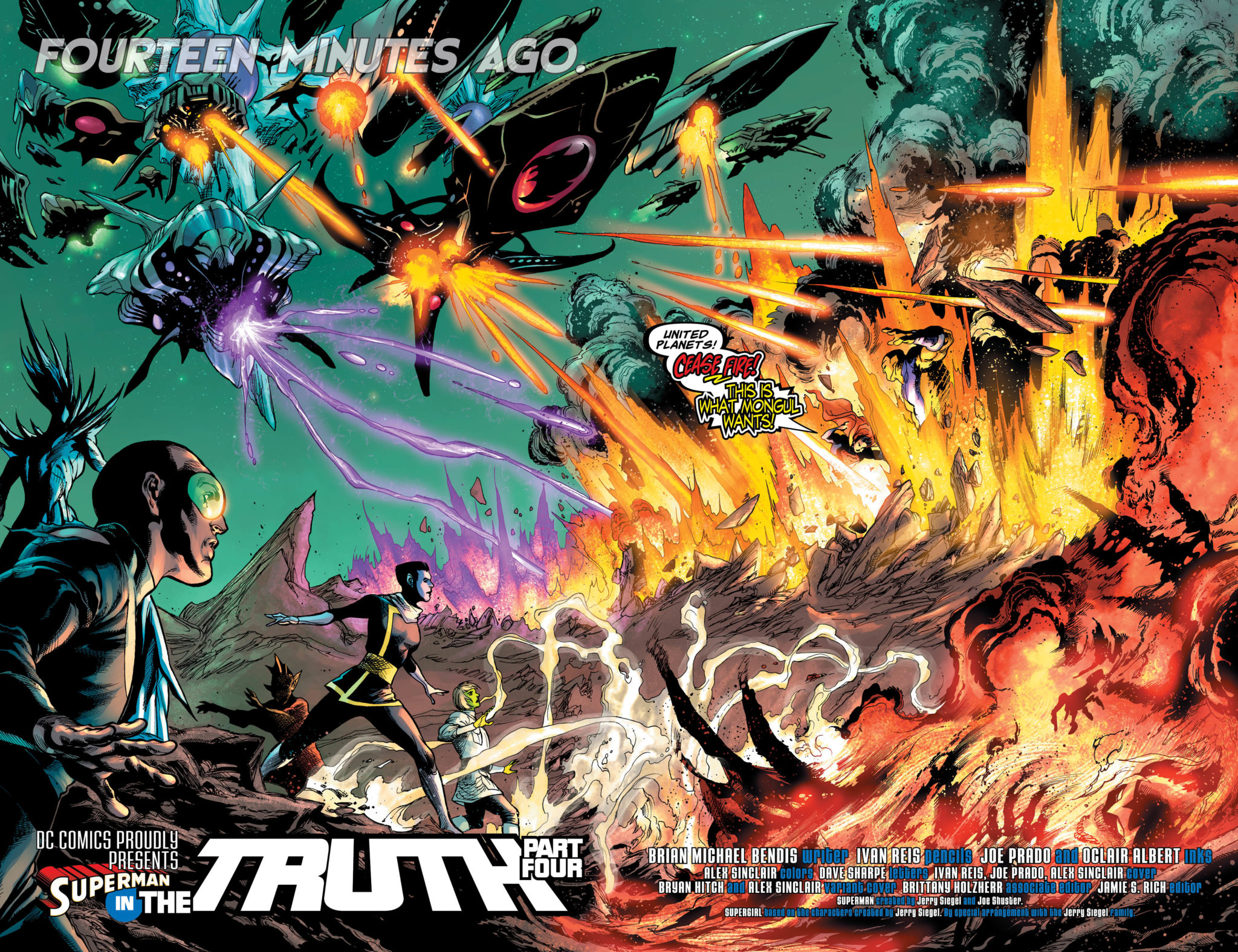 Reis, Prado, and Albert cement the concept of the dual-front issue with their framing. We cycle back and forth between Lois and Clark. Yet nearly every time we see Clark, he seems far away. He’s placed in a large panel, with alien planets and galaxies all around him. It gives us a sense of the magnitude of his actions. But when we return to Lois, everything is more intimate. We get lots of close-ups of her face and reactions, but she’s also set in smaller, more confined spaces. She’s not in any less danger; the stakes aren’t any lower. We just get the sense that for Clark, the dangers are huge and ethereal. Lois is dealing with the nitty-gritty, up close and personal.

Sinclair’s colors are downright beautiful. Each space panel is a dance of lights. With alien beams converging on Superman, and bright orange fires blowing across the black sky, the results are gorgeous. The neon colors and bright panels help create the juxtaposition between our two storylines. When we return to earth, we get familiar, darker colors. It both grounds the story and gives us a sense of a closer, more personal danger. 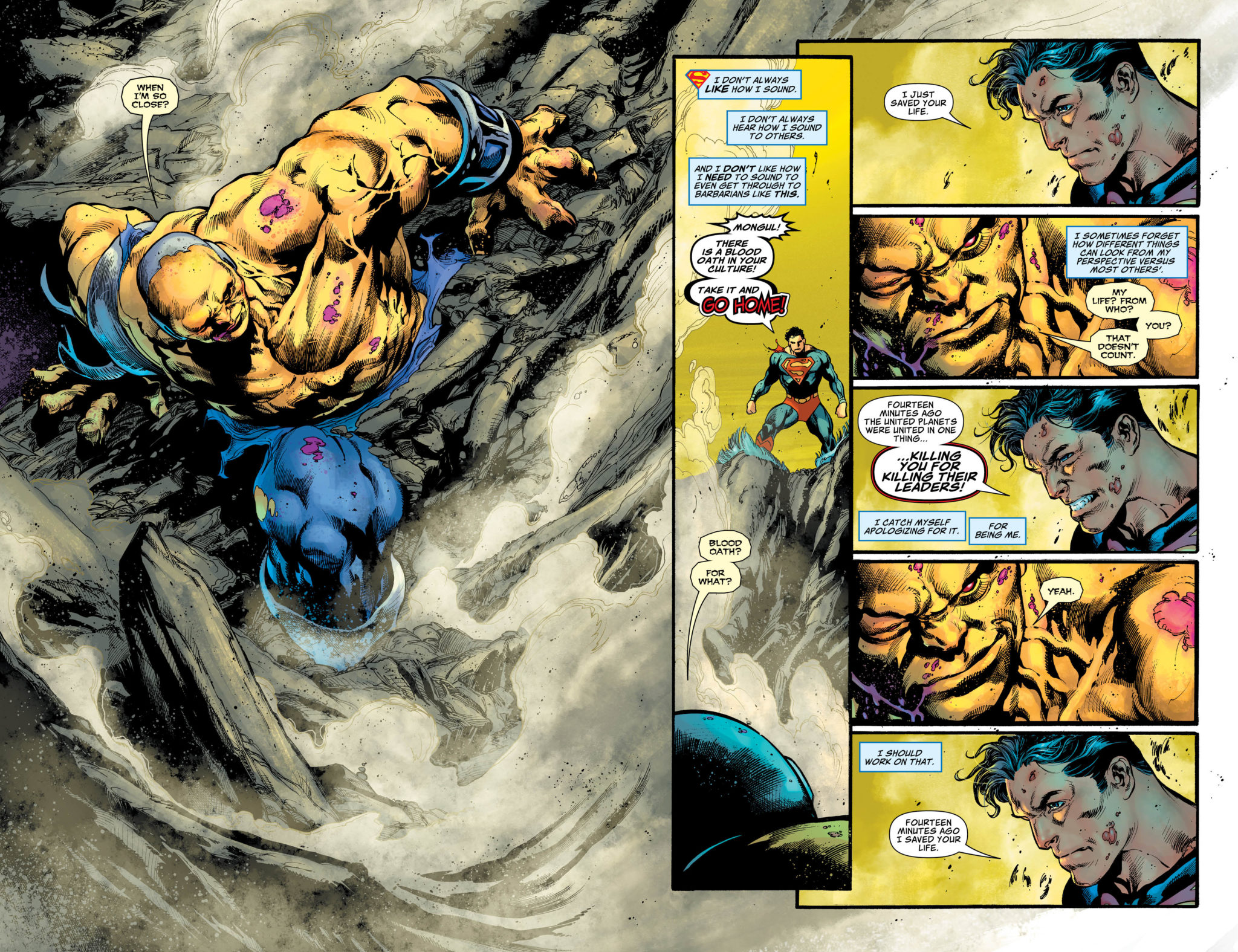 Sharpe’s lettering shows us that Superman is on the ropes. In a very uncharacteristic way, Superman’s dialogue is often written in large, colorful fonts. The un-phase-able man is desperate for once. Lois, however, remains unphased. Her dialogue is often written in short spurts, as she maneuvers her way through conversations easily. After all,
Lois is a journalist and a pro. Only as she closes the door to her apartment does she begin to talk to herself in a smaller font. Rambling a little as she lets her guard down. In all of this, we see Clark and Lois’ game faces, and how they take opposite approaches to the task at hand.

This issue could have easily been unapproachable. With Superman hosting alien peace talks, at a certain point, it feels hard to connect. But the creative team included responses from Lois and Earth, giving readers a bridge into the story. The stakes are high, but they’re also personal. We see with each new issue how Superman has been redefined as a character. Pick up Superman #21 on March 11th at a comic book shop near you!

SUPERMAN #21 Balances Space Fights with Office PoliticsBrian Michael Bendis is making his case with each new issue of Superman for Clark Kent's reveal. In Superman #21, written by Bendis, pencilled by Ivan Reis, with inks by Joe Prado and Oclair Albert, colors by Alex Sinclair, and letters by David Sharpe,...