With DC Comics’ Strange Adventures #10, we get all the answers we’ve been looking for. Writer Tom King, artists Mitch Gerads and Evan “Doc” Shaner, and letterer Clayton Cowles, execute their big reveal. And boy, they sure do stick the landing!

King’s script has two sides to it, just like in every other issue of Strange Adventures. For parts of this issue, we follow Alanna Strange. She’s reading a letter from Michael Holt, Mr. Terrific. The letter is well written and intellectual. Its contents are brutal and devastating. But the other half of King’s script is the complete opposite. We follow Adam Strange during the Rann-Pyykt War. These scenes are casually brutal. Adam smiles as he shoots enemies through the head. He cracks jokes between war crimes. Both halves of this script do a phenomenal job of showing the human response to wartime. Some, like Michael Holt, must study it. They need to know why they fight on a philosophical level. Others, like Adam Strange, need to pretend they’re not fighting at all. It’s just a normal day to him, full of bloodshed. 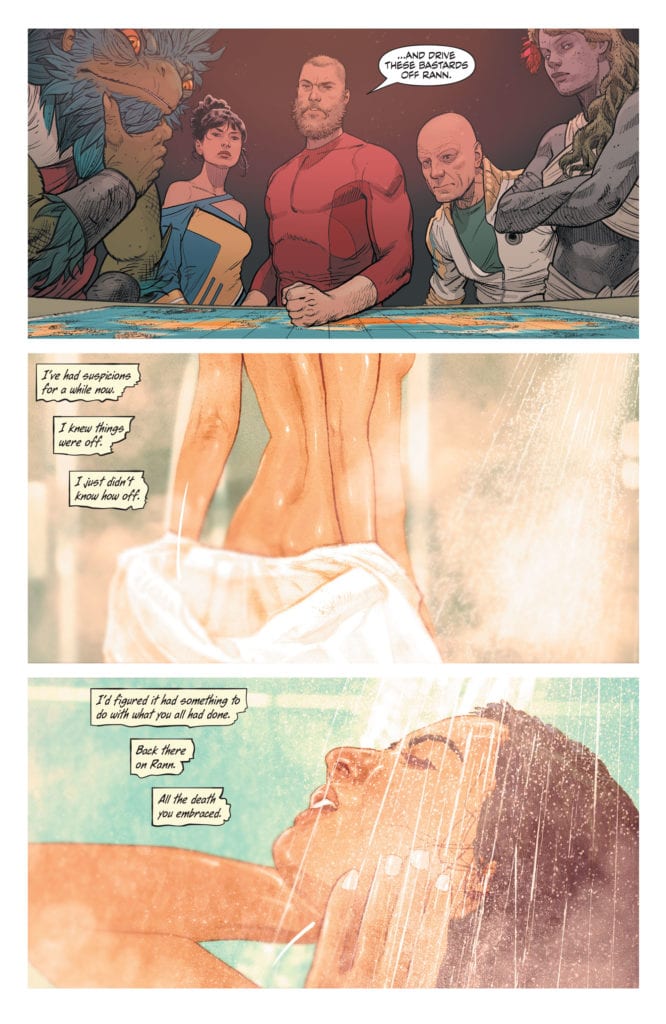 Gerads side of the comic focuses claustrophobically on Alanna Strange. We watch her go about her day. She looks glamorous and put together. Her face is unmoving. A mix of a smile and a look of determination. But at one point we see her sitting on the toilet, going through her phone. It’s a moment we feel like we shouldn’t be there for. But it’s clear this is a deliberate invasion of privacy. This is the one thing we’re seeing in Alanna’s day that isn’t rehearsed. And later, we see her take off her makeup. At first, it feels normal and part of her pre-planned day, until she has all of her makeup off. She glares at her own reflection. Gerads is showing us, in subtle interruptions to Alanna’s meticulously planned days, little moments of Alanna being human. He’s helping us understand Alanna at a time we need to understand her the most.

Meanwhile, Shaner’s pages are disturbingly comfortable with violence. Adam and Alanna often look full of happiness when they seem to be winning the war. But these moments of joy segue seamlessly into scenes of extreme violence. An action packed page of Adam charging into battle quickly leads to a panel of him executing Pyykt soldiers. Shaner’s pages once felt like a time capsule into the Silver Age. His characters looked happy and their trials were like something out of a movie. The consequences didn’t feel real. But now, Shaner is rubbing our noses in the consequences, but the smiles and the attitude of his characters hasn’t changed. It’s incredible. Shaner shows us vividly how normal the war has come to feel for Adam and Alanna as they grin through the carnage. 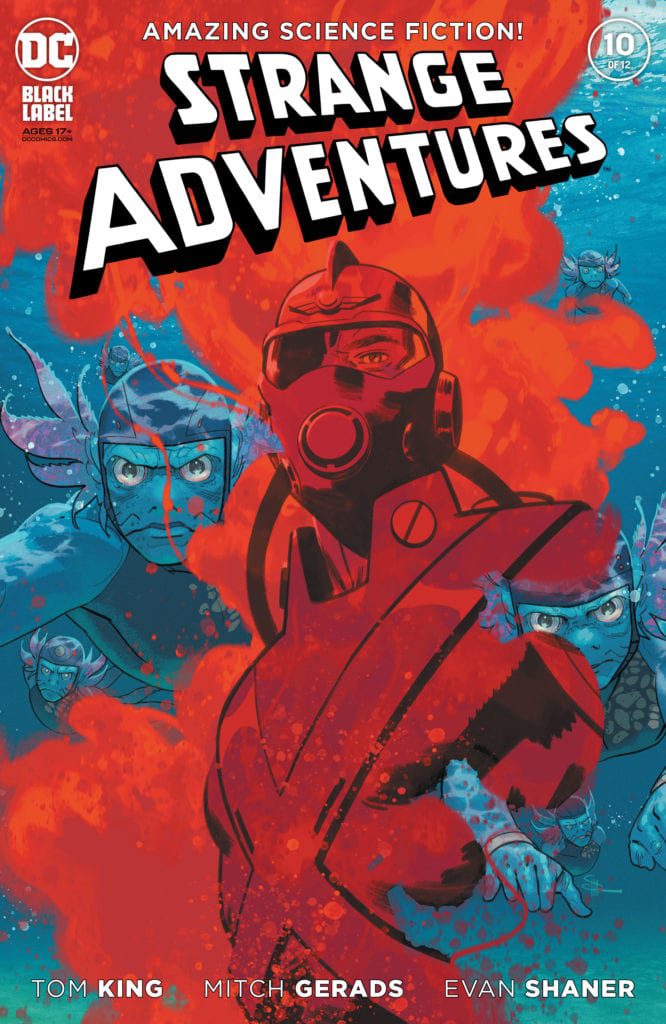 Gerads pages often have a golden hue to them. It feels like you’re reading the comic through a glass of whisky. But he dials down the color palette slightly when Alanna is in the bathroom. When she’s applying her makeup, sitting on the toilet, or taking off her makeup, the colors feel less intense. It feels like she’s no longer putting on airs. These are the moments she is alone and has no one to perform for. Shaner’s color palette is consistently deep and full, with one exception. Right before the issue ends, we see Adam flying off on the right side of one of Shaner’s panels. He is uncolored, to the point that we can actually see some of the layers of Shaner’s penciling underneath. It’s as though the revelations of Holt’s letter are undoing parts of this fantasy the Stranges have created. The image that Adam has presented of his time in the war is quite literally being erased.

When Cowles writes captions for Holt’s letter, he leads us down each page gently. We get three captions on one side of the page, one in the middle, and then three on the other. He guides our eyes carefully. It creates a sense of movement. But when we see Alanna taking off her makeup, the movement stops. All of Cowles’ captions are on the left of the page. For juxtaposition, when Alanna applies her makeup, which is shown in an almost identical way by Gerads, Cowles has captions on both sides of the page. So this is a clear difference. It suddenly feels static and unmoving.

The feeling the reader gets is almost one of whiplash. We’ve been gently following along and then we screech to a halt. It’s fantastic. Cowles snaps our attention back to the contents of the letter. And he makes us feel trapped in those captions. We no longer feel the range of movement we did before. And so, with that simple shift, Cowles highlights the importance of those final moments, and helps us see how Alanna must feel as she reads the same words.

DC Comics’ Strange Adventures is incredible. And with the bombs dropped in this issue, this creative team shows they can deliver on answers just as well as they delivered on mystery. Pick up Strange Adventures #10, out from DC Comics May 25th, at a comic shop near you!

DC Comics' STRANGE ADVENTURES is incredible. And with the bombs dropped in this issue, this creative team shows they can deliver on answers just as well as they delivered on mystery.Review: STRANGE ADVENTURES #10 Blows This Thing Wide Open!