SPIDER-MAN 2099 #1, available in comic book stores on Wednesday, December 11th, reintroduces us to Miguel O’Hara, a.k.a. Spider-man of the year 2099. Fans last saw him at the beginning of the Marvel 2099 event in which the hero warned Peter Parker of an impending doom in the future. However, the version of Miguel presented to us in this issue appears to have an entirely different story—he’s not Spider-Man, for one, and the only life he knows is within Alchemax.

The issue opens with Miguel waking up from a nightmare within his futuristic apartment. His home’s A.I., Lyla., can tell he’s clearly distraught, but the young man opts to proceed with his day. We then learn that the dream was spurred on his recent venture in a former testing area called the Ravage. 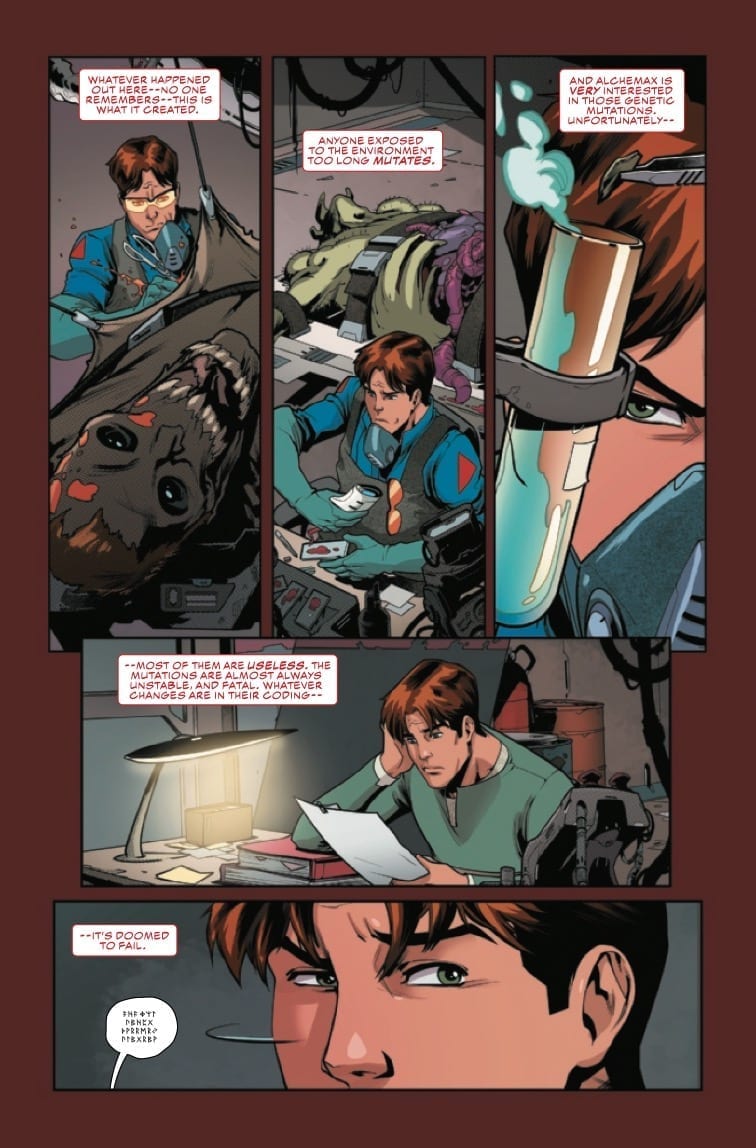 The scene flashes back to the Ravine, where Miguel takes samples from genetic “experiments” he was tasked to examine by the notorious chemical company Alchemax. It’s clear he hates working for them, but we learn it’s a price he’s willing to pay to stay afloat in the corporate-controlled world Earth has become—a particularly fitting metaphor for our own reality.

Miguel soon realizes that, though most of the genetically spliced creatures are dead, a few are hidden within the walls. Upon further investigation of the area, a spider-like beast screeches words in an unknown language just as hundreds of spiders fall on Miguel’s feet. 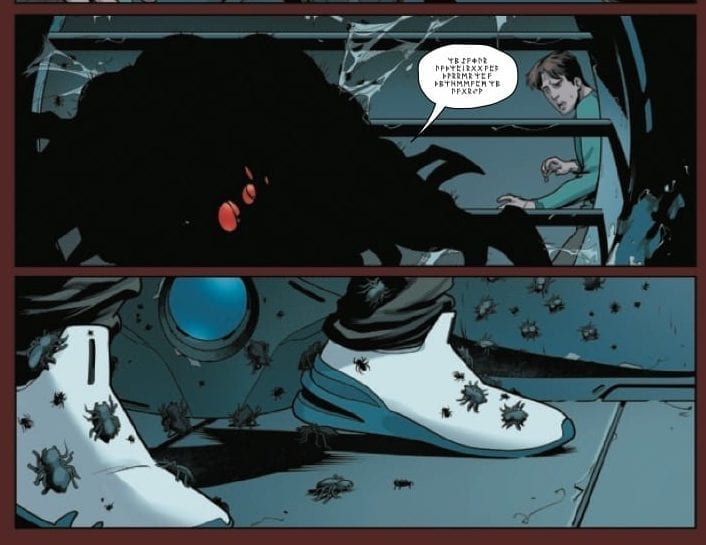 Could this be the new origin story of Miguel? How does this tie into the version of him in continuity? Writer Nick Spencer, as if responding to these questions, has Miguel experience visions of himself in costume and other events from Marvel Comics history—it’s almost as if the previous version is reaching out to this new character. However, one’s thing’s for certain: the timeline is experiencing fluctuations, and the fate of the future rests on Miguel’s reclaiming of the Spider-Man mantle.

Zé Carlos’ penciling and ink work, Brian Reber and Andrew Crossley’s coloring, and VC’s Cory Petit’s lettering were each wonderful additions to this issue’s artwork. The illustrations of Nueva York capture a unique futurism that’s not too farfetched; the buildings look like slightly sleeker versions of those in real life New York. At the same time, the creative team shows a stark contrast between these images and those of the slums and Ravine—the former employs cool colors that are common in digital formats while the latter uses more earthy colors to reflect its lack of technological progression.

In addition to the brilliant illustrations, SPIDER-MAN 2099 #1’s lettering makes it easy for readers to follow Miguel and the other characters’ dialogue amidst the fast-paced scene transitions. The effective use of font and color changes prevent us from losing track of who’s speaking at any given time.

Viktor Bogdanovic’s main cover artwork depicts Miguel in his classic Spider-Man 2099 garb, centering the focus of this issue on the character.

This issue is the perfect set up story for the Marvel 2099 event. Telling a new story of a beloved character while keeping it in continuity with comic canon appears is a daunting task, but SPIDER-MAN 2099 #1 seems like it’s perfectly suited for the task.

Do you think this is an official retelling of Miguel’s story? Let us know in the comments below!

Review: SPIDER-MAN 2099 #1 Revisits Miguel O'Hara's OriginThis issue is the perfect set up story for the Marvel 2099 event. Telling a new story of a beloved character while keeping it in continuity with comic canon appears is a daunting task, but SPIDER-MAN 2099 #1 seems like it's perfectly suited for the task.