[Review] In SHAZAM! #3 The Family Learns the Truth of the Seven Magiclands

The Funlands are a kid’s paradise, complete with sugary treats and carnival rides to enjoy to your heart’s content. And the ruler of this pseudo-Pleasure Island goes by King Kid, who is absolutely, positively not secretly a villain. The Shazam family also learns more about the seven realms of The Magiclands, which The Funlands and Earth (or, The Earthlands) are part of.

“SHAZAM! AND THE SEVEN REALMS” continues! Billy Batson’s world is turned upside down by a figure from the past while Mary, Freddy and the rest of the Shazam Family enter a realm of endless amusements, candy factories and friends in the Funlands! But what’s the catch? Plus, a shocking development within the Library of Eternity! 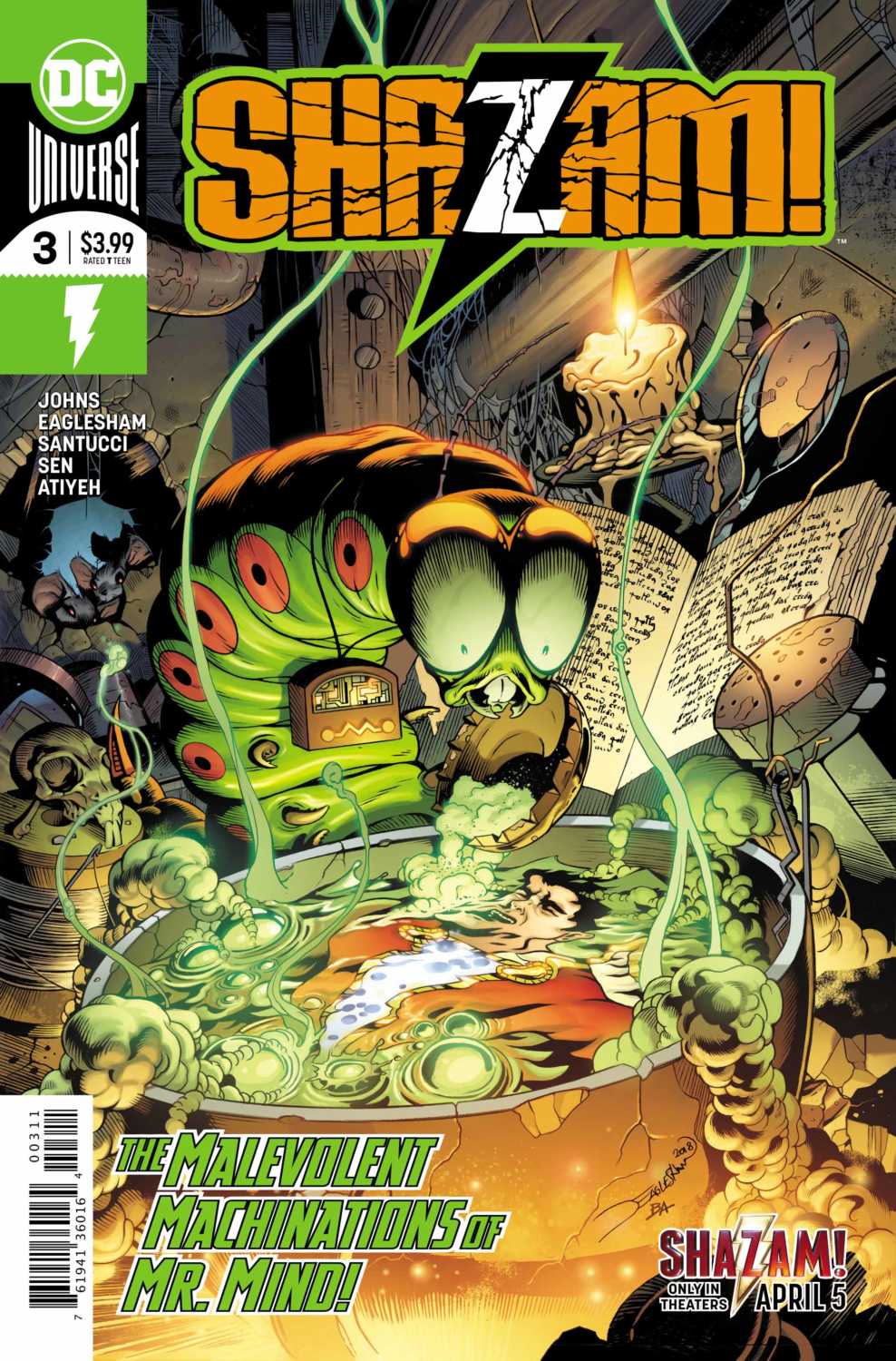 In the previous issue, we learn that the exclamation point of SHAZAM! represents a seventh powered letter of the name. And King Kid believes he is that seventh champion of the superpowered family. A little trip down memory lane reveals how the kid who would be king literally stumbled into what would eventually become The Funlands. He also goes on to tell Billy and the others how he wished the endless fun of the Magiclands realm into existence, as well as the other children to share in the fun. Now the King Kid is wishing Billy would tell him what the magic word is, so he can have the power as the world’s mightiest mortal.

Writer Geoff Johns has proficiently crafted the tone of this story to appeal to an audience of all ages. Younger readers will enjoy its lighthearted, straightforward narrative, and older fans will appreciate the nostalgic optimism that Johns promised a return to when he announced the DC Universe Rebirth. The issue itself is not all that exciting. Its dialogue is run-of-the-mill, primarily serving as exposition and setting up what’s to come next. Having said that, Johns sure loves his world-building.

It is no doubt that Johns is one of the best writers working in the industry today. However, it seems as if he will only take on characters if he gets to perform some major universe expanding with them. But did we really need that right now: at the beginning of the first major Shazam! series since 2008? This is also the first time seeing the modern interpretation of the Shazam! family since 2011, when they appeared in the last few pages of the first issues of the New 52’s Justice League. A simpler story that reintroduced the characters would have been helpful.

The artwork continues to be amazing in this Magiclands story. Artists Dale Eaglesham, Marco Santucci and Mayo “Sen” Naito do a wonderful job in crafting characters with vivid expressions, and scenes with so much detail that you simply must stop reading and admire. I particularly appreciated the shift in artwork style during a flashback sequence. The artwork is only enhanced by the colors of Mike Atiyeh, who makes each panel bright and easy on the eyes. 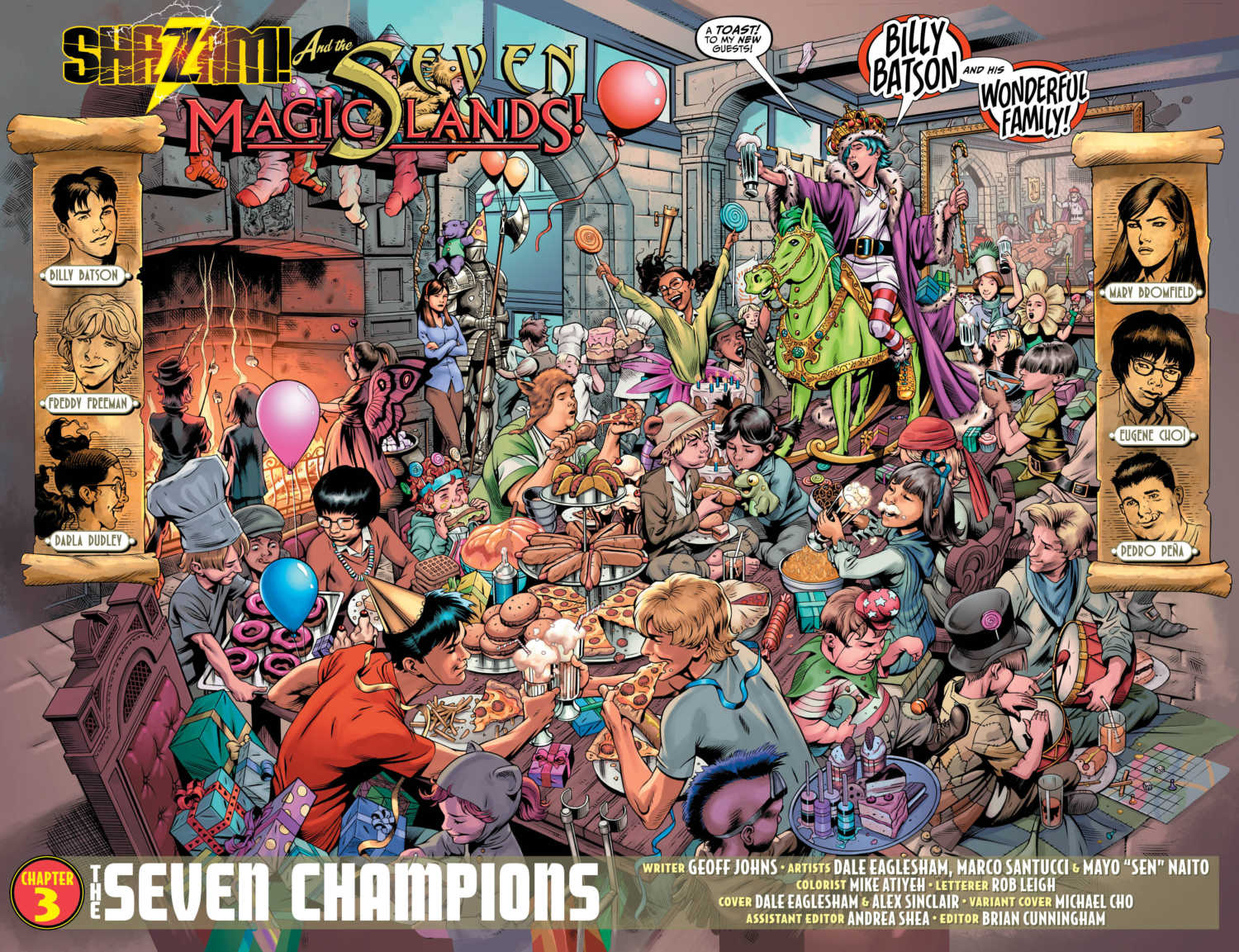 Clearly appealing to a younger audience, there isn’t too much to write home about in this issue. But it will hopefully all pay off as the Shazam! family explores the Magiclands and the truth behind King Kid’s intentions are revealed.

What do you think of this current run of Shazam? Which of the Magiclands would you like to take a trip to? Let us know on the comments!

The Shazam! family learns about their connection to the seven realms of The Magiclands, as well as the true intentions of King Kid.[Review] In SHAZAM! #3 The Family Learns the Truth of the Seven Magiclands