I first came across Tony McMillen’s work via an interview in Wizerd: The Comix Megazine #1. The article also included an excerpt from Tony’s graphic novel, Serious Creatures. I immediately was floored by his art and wasted no time connecting with him online. So when Tony launched the Kickstarter campaign for his latest book, Attaboy, I reached out to talk to him about it. Check out the chat and then make sure to check out Tony’s work.

Monkeys Fighting Robots: So Tony, how are you today? Thanks for taking the time to talk!
Tony McMillen: I’m doing good, glad to talk with you!

MFR: So I ask everybody this, what’s your comic book origin story, like how/why did you get into reading comics and then creating comics? Give us a brief history.
TM: Summer of Batman ‘89 was inescapable, Tim Burton’s movie made it so Frank Miller’s Dark Knight Returns was in every bookstore, which meant that my now Batman obsessed 7-year-old self could convince my Aunt Susie to buy it for me. That comic made me a full-blown comic junkie. Now, I just get high on my own supply. My first comic written, drawn, lettered and colored by me is called Lumen and I self-published it about three years ago. The summer of the bat never ended for me.

MFR: So to get all Hollywood (since I know you are a film fan!) what’s the logline/elevator pitch for Attaboy?
TM: An oversized comic disguised as an instruction manual for a video game that may or may not have ever existed. 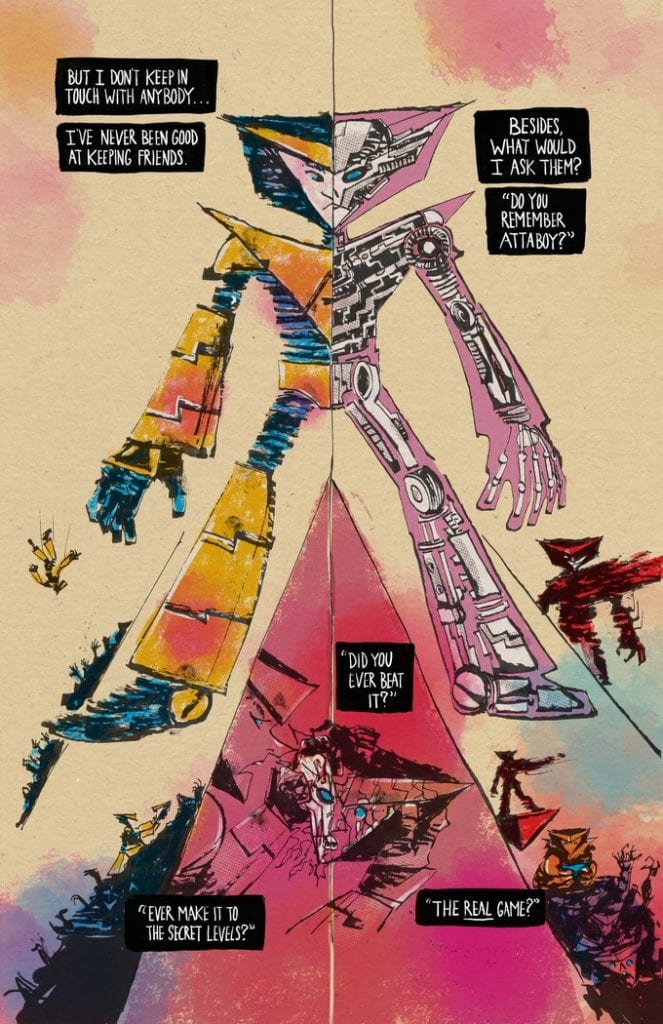 MFR: I know you have done multiple methods of publishing in the past. So why go with Kickstarter for Attaboy?
TM: Kickstarter remains the best presale/promotional tool available for an indie comic book creator. I have had my novels published through traditional presses and sold my comics and graphic novels myself through my Etsy shop but I always make the biggest fuss and get the most readers through Kickstarter. So, with Attaboy, it was a no-brainer to go back to the platform.

MFR: How did the project originate? Like did you think of a character first or the concept? Because both are so vivid to me that either seems to have been able to be that press of a start button!
TM: I’ve been thinking of the lost art of the video game manual for a long time. I was originally going to do my comic Lumen in that format but I hadn’t yet cracked the Konami code on how it could work narratively. At the same time, I started developing the idea of a little robot boy character, akin to Mega Man, or Astro Boy. There’s even an Attaboy t-shirt worn by Bobby Feckle, the main character of my last comic Serious Creatures in issue 4 of that book. But it took me a long time to finally pair the character Attaboy with the video game manual framing device. And what finally brought it all together was the Mandela Effect notion of the book’s opening line, “There’s a video game from when I was a kid that no one else seems to remember.”

MFR: What made you go with an oversized format for the book?
TM: Erik Larsen’s Herculian was the first treasury-sized book I really remember knocking me out with how much the size of a comic could impact the reader. Later on, Jesse Lonergan’s Hedra, the original newsprint version, furthered my interest in the bigger format because Lonergan really took advantage of all that extra real estate with massive, dense, yet playful panel grids. But I had no idea how to get a bigger book printed yet. But after finishing my comic series Serious Creatures I decided to do an art book titled Fairweather Fiends and out of the blue, I asked my printer if they could do something bigger than an average comic. They said, you’re in luck, we just got some new machines that can do it! So I made the artbook nearly vinyl record sized. The stage was then set for me to try and play with a larger size comic and see what that opened up for storytelling possibilities.

MFR: Do you have other physical details already planned? Like the cover, paper stock and binding?
TM: I already have a good-looking proof, the paper stock will be matte, the cover glossy, perfect bound. Nothing too out of the ordinary; the book’s already a behemoth, no need to put polka dots on top of the stripes.

MFR: Attaboy gets very meta-fictional. Was that aspect something you always had in mind? Did anything in particular influence that aspect?
TM: Stumbling upon the meta-fictional and personal elements of the story is what finally made the story start working for me. Basically, I was stuck with this concept of using the trappings of a video game manual as a way to tell a comic book story but I had no real story yet. When it dawned on me to start making a story about this forgotten video game and what the escapism of video games meant to me as a kid is when the gears started moving and Attaboy started moving with a life of its own. The two biggest influences for that sort of confessional approach wrapped in the iconography of fantasy and science fiction were Notes From the Shadowed City by Jeffrey Alan Love and Cankor by Matthew Allison. Both showed me how personal and autobiographical you could make a story about robots or monsters. The idea of a panel of a robot fighting some giant monster but the narration is all about my parents’ divorce and it all somehow works together; those books showed me how a creator could make that work. 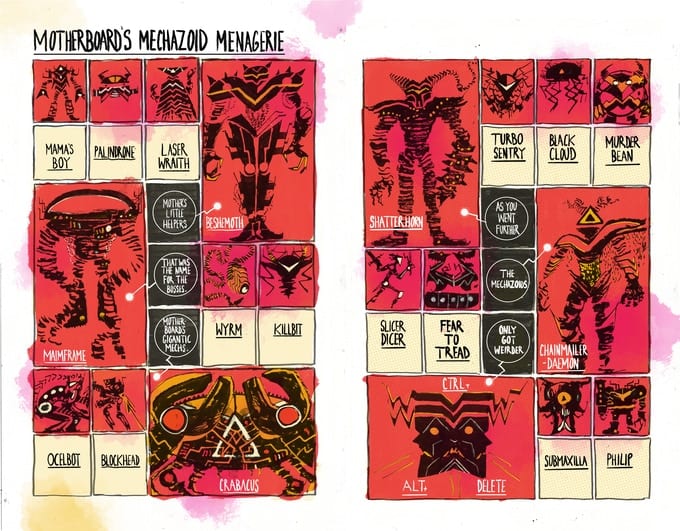 MFR: I also sense a level of sadness and nostalgic longing in the story that I really connected with. Was this something you were striving for? Maybe it’s just something that I am just seeing?

TM: I am here to break your fucking heart! The sadness just kept creeping into the work. I’ve been reflecting on this sort of rekindled interest in estranged fathers and mothers in my work and I think it’s all from becoming a father myself two years ago. My first book Nefarious Twit was all about my anger and love for my parents but after that, I thought I had said what I wanted to say on the subject, and I seemed to move on with my next books and comics. But with Serious Creatures and now Attaboy all those feelings and new ones keep bubbling up. I think simple, superhero characters like Attaboy are good vehicles to explore the weirdness of childhood because they’re, of course, pillars from our childhood. Batman, Spider-Man, Link from Zelda; they’re all the imaginary friends who whisk you away from the mundane and sometimes anything but mundane trauma that can happen to a kid. They’re the keys to escape, so it’s only fitting that later in life they’re the keys back into that time period. And all the intense feelings that come with it.

MFR: As far as influences go, did you have any specific influences for Attaboy?  I immediately see Mega Man in there.
TM: Mega Man is the biggest, and without Astroboy, there’d be no Mega Man. But I have only a passing knowledge of Astro so Mega was my first boy robot. The original Legend of Zelda’s manual is a work of art onto itself and I used to marvel at it as a kid; so that’s a huge influence of the structure of this comic. Jack Kirby’s Captain Victory, Kirby and Dave Cockrum’s character designs (I’ve been trying to figure out the magic of designing characters that stand the test of time) Michel Fiffe’s Copra is never far from my mind either.

MFR: The art is fascinating. What were the tools and mediums that you used? How was it physically created?
TM: Thanks! I use a Pilot Parallel Pen, it’s a chisel tip pen that you can drag over paper to get a very thick, textured line. But you can also use the corner’s tip to get a fine line; it’s my one-stop shopping tool. I draw pretty much exclusively with that and a whiteout pen on Bristol board paper but then color the comic digitally using an iPad Pro and Procreate. I strive to make my colors appear as analogue as possible and end up using a lot of digital crayon and watercolor brushes. 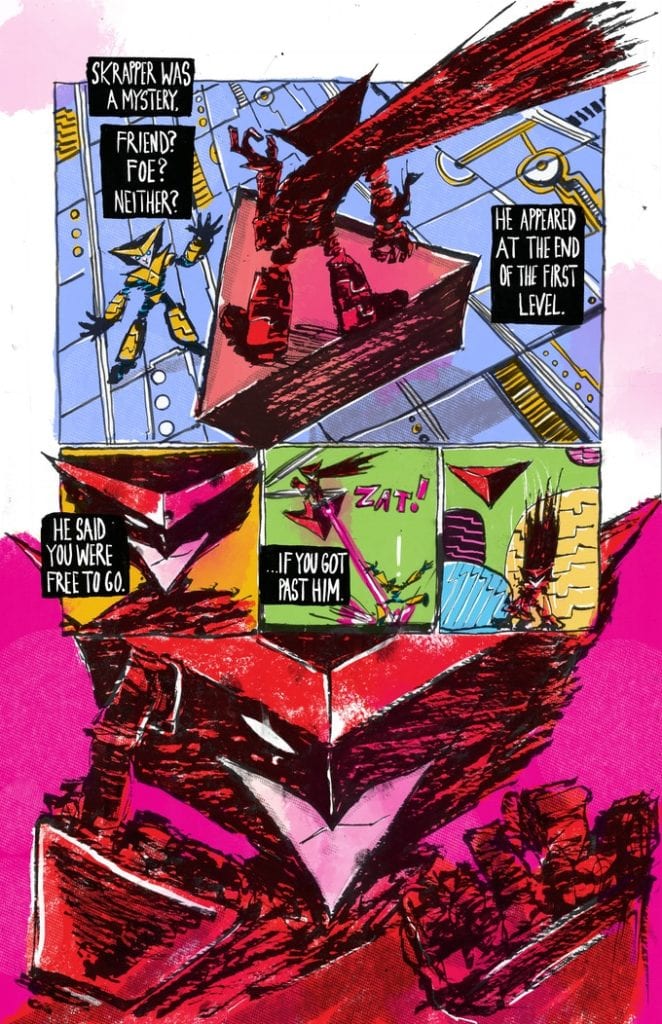 MFR: This isn’t your first comic. But was there something new you did with Attaboy that you didn’t do with your other projects? A new process or approach?TM: The big leap forward on Attaboy is that it’s hand-lettered. I’ve used a font based on my own handwriting for previous projects but for this, I went the old-fashioned route…kinda. I hand-lettered it on my iPad Pro with my stylus, so if I made a mistake, or wanted to tweak the lettering size I could do so easily.

MFR: How long did it take you to have a fully finalized book? What was the timeline from beginning to end?
TM: I think it was about 4 and a half months to make a 74-page book, top to bottom

MFR: Will the book be available anywhere after the Kickstarter campaign ends?TM: Oh yes! It will be available at my Etsy shop along with all my other comic work. https://www.etsy.com/shop/tonymcmillen

MFR: Are there any plans for more Attaboy?
TM: I sorta love that little guy and really want to team him up with Esteban Vela, the masked hero from my adventure comic Lumen. I’ve been dreaming up a team book with Atta, Esteban, a new character named Beshemoth (think Big Barda meets Samus) and another new character called the Princess with the Parasol (think a goth Princess Peach from Super Mario). But I probably won’t get to making this book until after Serious Creatures Vol 2; so it might be a year or more until Atta returns.

MFR: Any final comments for our readers?
TM: Attaboy is designed to be an event, like a concert, or a monster truck show…so, get your ticket, take the ride. Because, “You’ll pay for the whole seat, but you’ll only need….THE EDGE!” 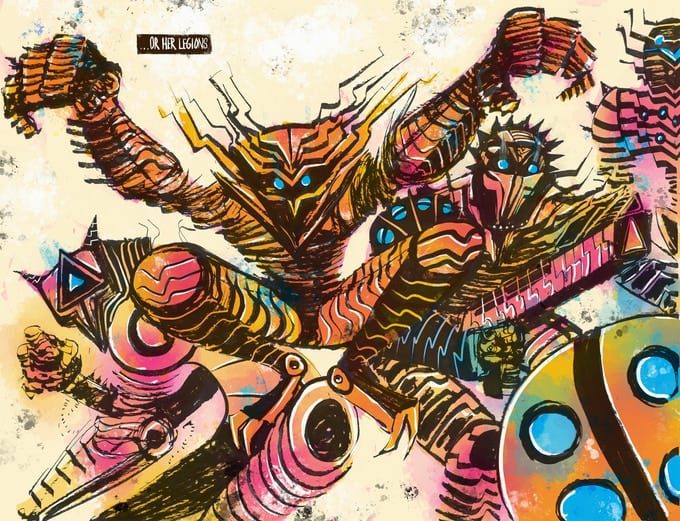