Review: YOUNG HELLBOY: THE HIDDEN LAND #1 Is A Blast of Classic Adventure

The Hellboy universe is already known for its wide array of adventure genres, from haunted house ghost stories to good ol’ Kaiju beat ’em ups. However, one thing I don’t think I’ve ever seen this series do is a classic Land of the Lost style prehistoric island tale. This is exactly what we get with “Young Hellboy: The Hidden Land” #1. This first of a four issue mini-series by writers Mike Mignola and Thomas Sniegoski, artist Craig Rosseau, colorist Dave Stewart, and  letterer Clem Robins has all the making of a fun dinosaur and monster-filled adventure tale, but with the added twist of the Hellboy mythology and the complications that arise from his presence. With a tightly paced and sharp script, as well as great visual work, this is just the sort of Hellboy as a young lad story I didn’t know I needed.

“Stranded on a strange island after a mishap on their way to a South American dig site, Hellboy and Professor Bruttenholm are confronted by all manner of monsters! But even when the stranger who rescues them turns out to be one of Hellboy’s heroes, they aren’t as safe as they think they are!” 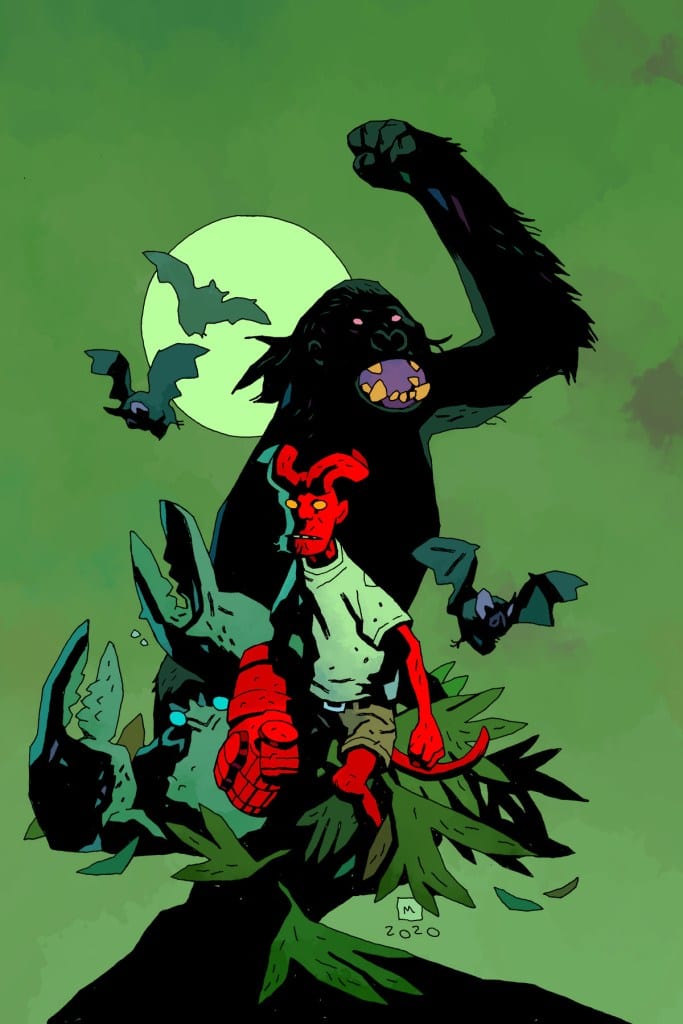 The script from Hellboy creator and vanguard of this universe Mike Mignola and his cowriter Thomas Sniegoski is one of simplicity, focused on being a fun adventure romp. The perspective of big Red when he was still just a inquisitive kid bugging his old man is a fun and refreshing take we don’t often get in the Hellboy universe. In fact, many of the interactions we get in Hellboy and the B.P.R.D. stories that involve young HB and his adoptive father Professor Bruttenholm are ones where the latter is too busy for his charge. Seeing the two together is a great thing on its own, and the environment that they are placed in is even more of a bonus. This comic is a big tribute to classic mysterious island adventure stories of old, which can trace their lineage back to early 20th century young boys’ novels and golden/silver age adventure comics. Crashing on a land full of oversized crabs, dinosaurs, and irritable apes is a classic trope familiar to the adventure genre, but one that never seems to go out of style. This comic offers up every one of those lovable tropes, but with the twists involved with Hellboy as a character and the world he inhabits. The dialogue is simplistic and fun, with most of it consisting of young HB asking tons of questions (as kids do) and making loud exclamations. This isn’t the kind of comic book that’s going tp blow you away, but it’s certainly fun enough to keep you engaged from start to finish, whether you’re a Hellboy fan or just someone who likes a good adventure. 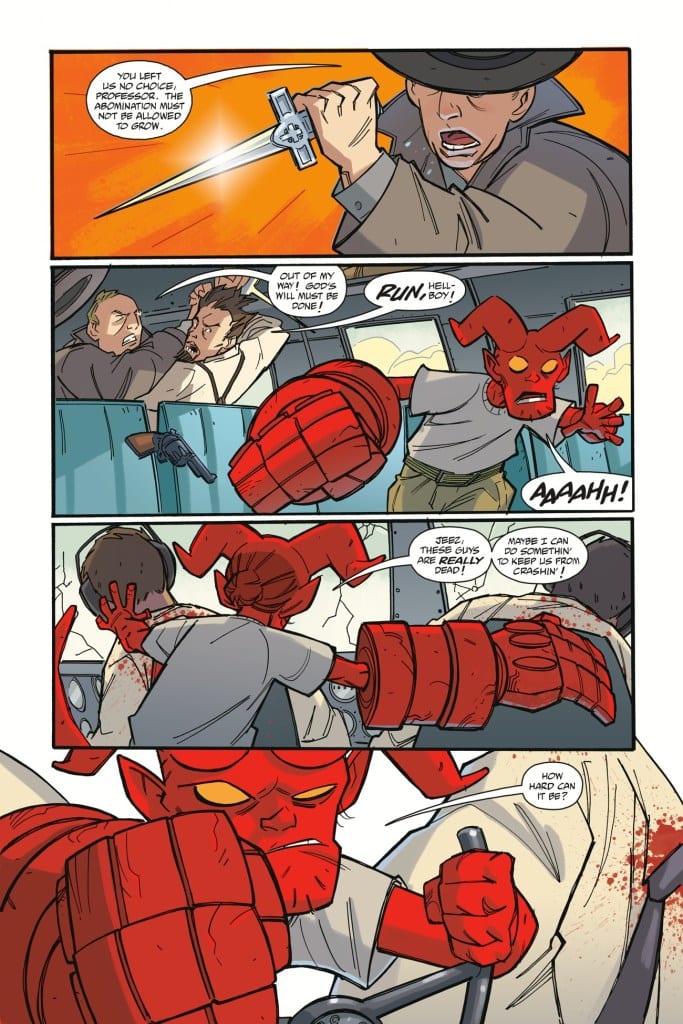 The Hellboy universe is especially well-known for its uncanny artwork, mostly because of the signature style of the legendary Mike Mignola. Any book that comes out as a part of this universe has to in some way math the sort of strange and eerie aesthetic that this universe demands. What’s special about “Young Hellboy” #1 is how penciler Craig Rosseau and colorist Dave Stewart manage to achieve this effect while also creating an uncharacteristically bright adventure for this universe. Rosseau’s pencils utilize the same sort of thick and shadow-heavy style that resembles Mignola and other Hellboy artists, while still maintaining a kind of distance from those other works. The look of the characters and the monsters that arrive in this comic undoubtedly have that Mignola-esque look to them, but there’s a kind of youthful light that isn’t there in the other Hellboy and B.P.R.D. books…and not just because this is a young HB. Now, much of this is due to Dave Stewart’s choice of colors. Every surface in this comic is drenched in sunshine, and I can’t help but feel that a lot of that light comes from how Stewart chooses to demonstrate how our young Agent Hellboy affects the people around him and the story as a whole. The enjoyment we get out of reading this character, decades before the tumultuous events leading to the end of his story some 70 years later, is made into a visual experience by how bright and vivid this book is. The darkly saturated colors of the older Hellboy stories and that of the B.P.R.D. and other tales in this universe are directly juxtaposed to this youthful adventure comic. The lettering from Clem Robins shares its fonts with basically every other book in this universe,, including its sound effects. Would we really want it any other way, though? 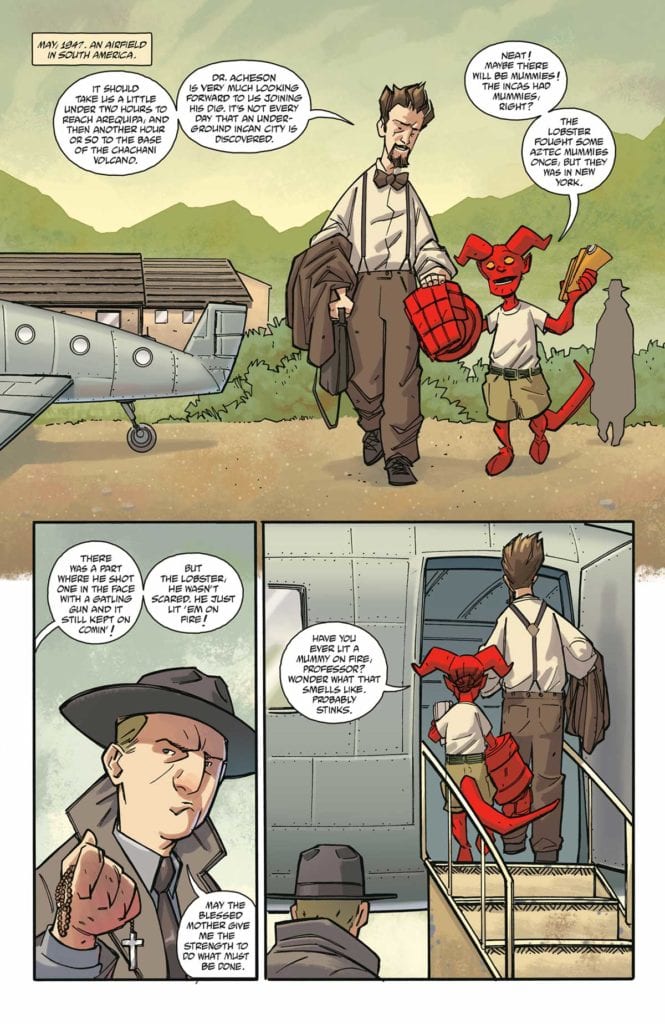 “Young Hellboy: The Hidden Land” #1 is a delightful start to this adventure mini-series. Thomas Sniegoski, with help from universe creator Mike Mignola, puts together a stellar yet simple homage to lost island adventure stories of decades past, but with the twists that come with the inclusion of a young and energetic Hellboy. The visuals of Craing Rosseau and Dave Stewart blend in seamlessly with the overall aesthetic of the rest of the Hellboy Universe, but manage to have a brighter look due that matches this comic’s focus. Whether you’re a diehard Hellboy fan or a fan a good adventure stories, be sure to pick this issue up when it hits shelves on 2-17!

A simple jaunt into an island of adventure featuring our favorite stone-handed hero, heavily inspired by island adventure tales of old.Review: YOUNG HELLBOY: THE HIDDEN LAND #1 Is A Blast of Classic Adventure