Review: Year One Begins in THE FLASH #70

Time to see Year One of the Flash!

His name is Barry Allen, and he’s the fastest man alive. For the past 70 plus issues, we’ve seen Barry go on a variety of journeys in the present. From facing Godspeed to learning of the different forces, we’ve watched Flash save his city at every turn. Now for the next arc, we have another story to tell, but not in the present. Instead, we turn our attention to the past as we experience the first year of Barry Allen’s career as the Flash. Much like the legendary Batman Year One, this will show us what truly built the scarlet speedster into becoming the comic legend he is now. So where does this origin begin? 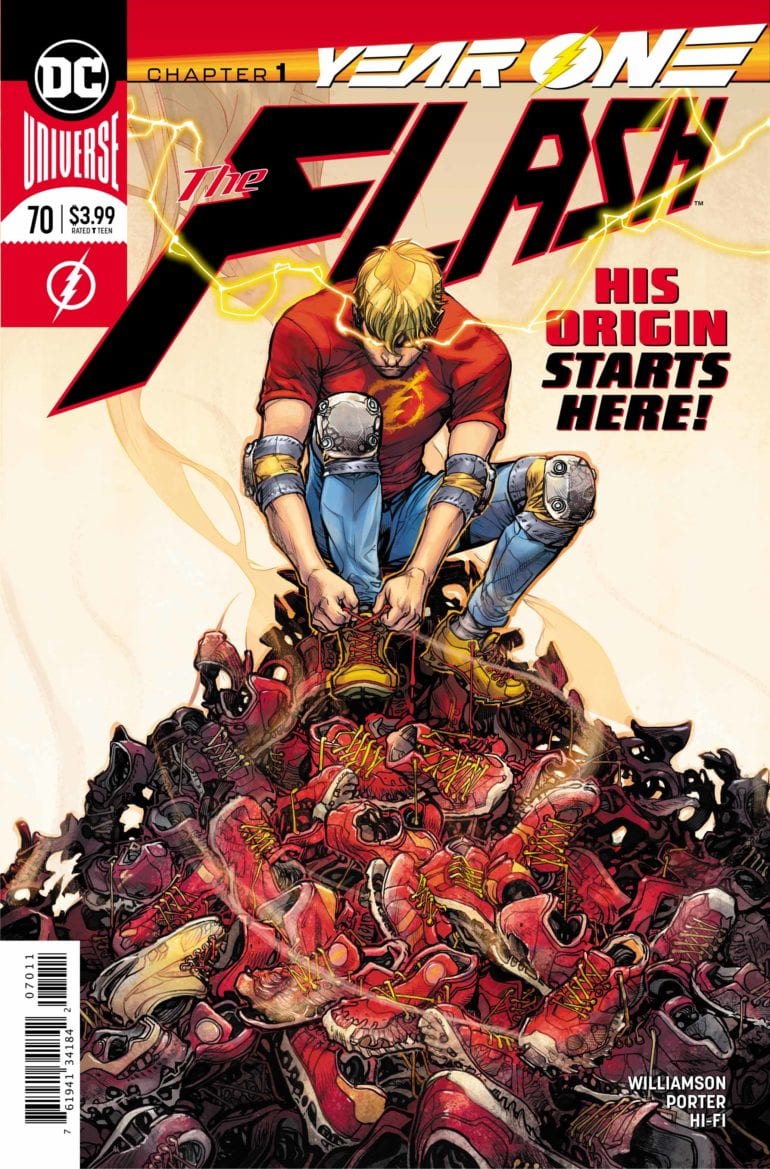 We open to a young Barry Allen who had recently gotten into a fight at school. When his mother asks why he didn’t tell her or his father, Barry explains he was protecting kids, just like the Jay Garrick Flash does in his mom’s comics. She says she’s proud of her son and never to lose hope. Years later, we see Barry doing his job for the CCPD as he examines a crime scene. He gets interrupted by Iris West who is sneaking around for a story. His coworker suggests he should go out with her due to the weather being clear. This changes shortly after as a storm rolls in. That night as he looks over evidence of his mother’s murder, lightning strikes Barry and chemicals. 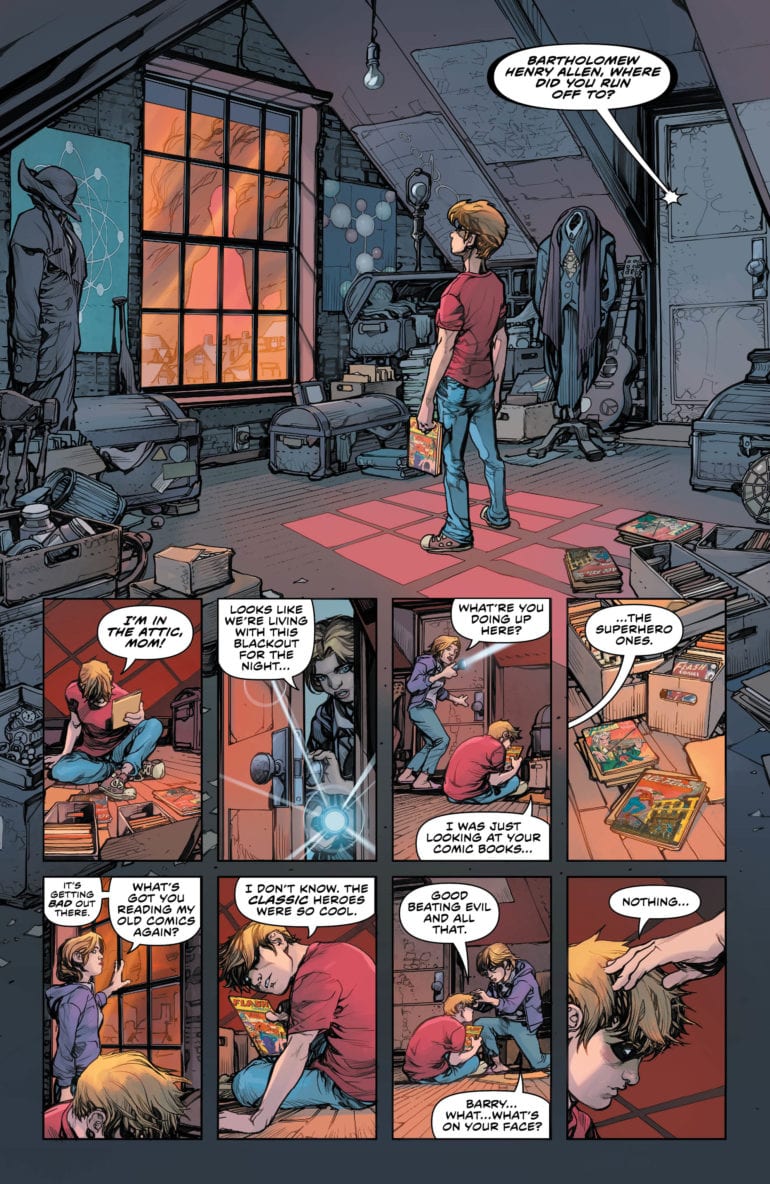 This issue doesn’t bring anything new for long-time readers to enjoy. This is, at its core, an origin story many readers probably already know. This doesn’t mean it’s terrible. The origin of the Flash can be exciting, especially when we see the training montage near the issue’s end. The best part is the cliffhanger. It sets up the main antagonist for The Flash’s first year as well as brings in Barry’s first time using time travel. While it may be a story we’ve all heard before, it promises an entertaining ride in the upcoming issues.

Howard Porter has always been one of my favorite artists at DC, and this issue is an excellent example of why. His illustrations are able to capture small emotional moments and the large fantastical ones. The page where the lightning strikes Barry is a beautiful spread with the lightning forming the noise it made. I kept going back to it to take in the masterful skill. The only thing that makes this issue look even better is the always spectacular colors of Hi-Fi. Flash Year One already looks excellent thanks to the fantastic art team. 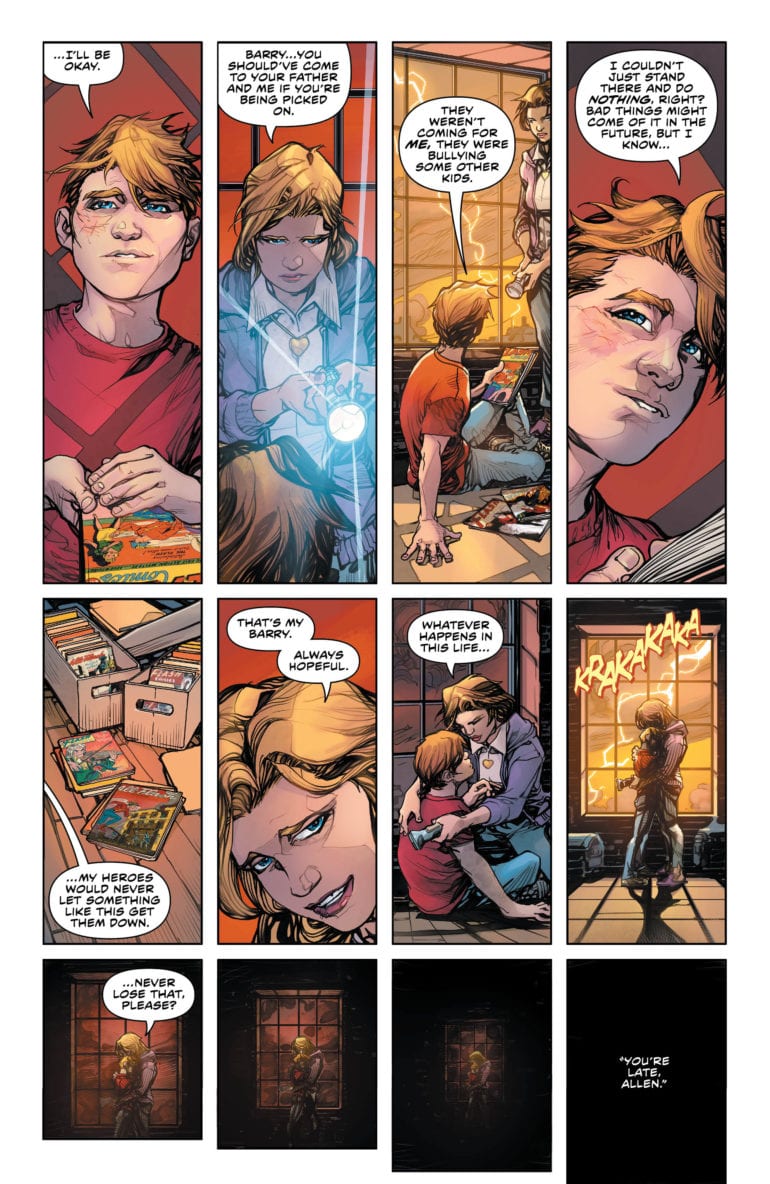 This issue of Flash Year One is going to split some people. While there are people out there who want something new, they’ll need to wait until the next issue. What we have here is a retelling of a story many knows but doesn’t cease to entertain. With the out of this world art of Porter, the first chapter in this origin story is a fun one, to say the least.

While it's a story we've heard before, The Flash Year One is off to a fun start with great art.Review: Year One Begins in THE FLASH #70