WYND #3, available from BOOM! Studios on August 26, brings Wynd, Oakley, Thorn, and the Prince together for the first time, fleeing toward separate destinies. Written by Jame Tynion IV and drawn by Michael Dialynas, this latest installment picks up immediately after issue #2 (read our review here), fills you in on some history, and puts the Bandaged Man squarely on Wynd’s trail.

Dialynas’ cover is a great setup for what’s to come. Wynd and Oakley look on in fear as someone comes after them in Pipetown’s tunnels. The green glow gives you a hint that something “weird” is happening down below, in more ways than one.

Now we’re cooking. One of the minor story problems with the previous issues was lack of context. The reader naturally would ask, “are the magical woods really dangerous?” This issue not only gives you a whimsical retelling of how the kingdoms came to be but answers the question about magical creatures in a definitive way. That all assumes you take the narrator’s word for it. Time will tell.

There’s a lot of rushing around and escaping as the group of protagonists are finally forced together by fate. You can’t help but see some similarities to The Lord Of The Rings, but the collision wasn’t forced or heavy-handed in any way. Tynion does an excellent job wrapping the setup in harried chase scenes and (possibly) a few sacrificial deaths that mean something. This is a great issue when it comes to both action and heart.

Dialynas’ drawing style compliments and enhances Tynion’s story with a treasure trove of facial expressions, especially with the eyes. This chapter in the arc runs the emotional gauntlet from grief to surprise to skepticism to fear of embarrassment. It’s all done through Dialynas’ artwork, where sometimes no dialog is necessary. It’s a joy to read when an artist can pull off such a full range of emotion without the aid of narration or exposition. 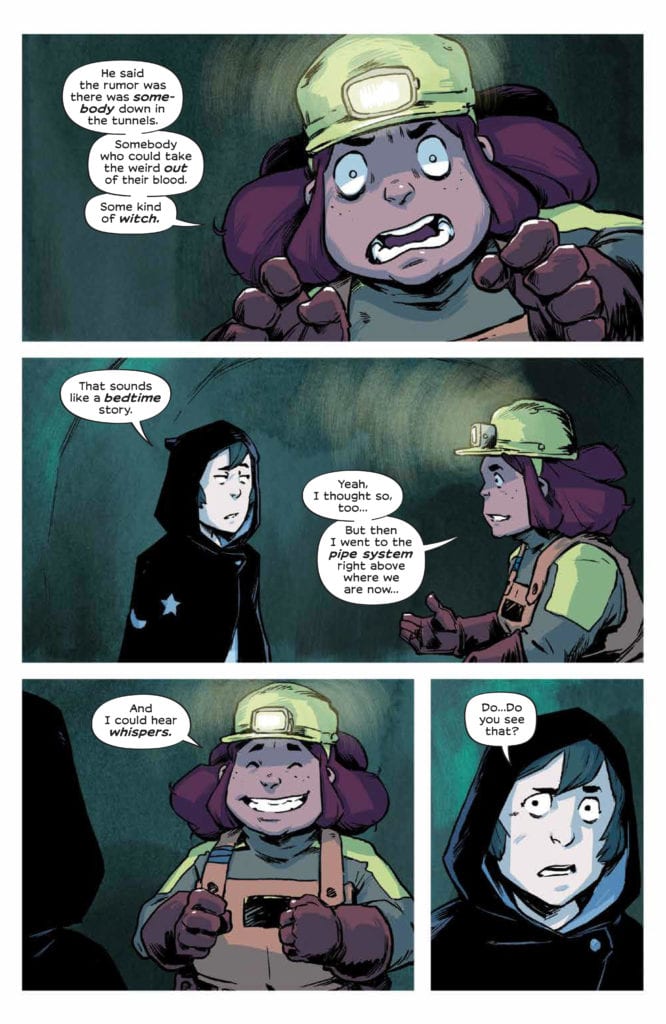 Also, it was a pleasant change to finally see some of the “infected” peoples of the wood when they’ve only been talked about up to this point. Dialynas’ renderings of the weird folk are more reminiscent of refugees in a leper colony rather than a pack of dangerous monsters. It’s Dialynas’ designs that, again, help the reader feel through the artwork.

Likewise, Dialynas’ coloring work brings a new element to the issue – green. Lots and lots of green. The infected are made so by the magical woods, and so, there is a heavy amount of vegetable growth in the afflicted. In a town characterized by its earth tones and rust, the green on the infected stands out in a way that leads you to suspect the infection may not be entirely malignant.

Aditya Bidikar’s lettering has a little room to show some range in this issue. Not only do you have the dialog from Wynd and the rest of the established characters, but you also have an invisible narrator telling the story of the world and the mysterious guide with an inhuman voice in the underground tunnels. Bidikar takes full advantage of these different voices to letter flawlessly and add visual interest.

WYND #4, available from BOOM! Studios on August 26, is an emotional roller coaster, filled with suspense, excitement and a touch of grief. The writing fills in some of the missing gaps from the prior issue in a satisfying way, and the artwork is consistently great. I’m anxious to see where the fellowship goes from here.

WYND #4 is an emotional roller coaster, filled with suspense, excitement and a touch of grief. The writing fills in some of the missing gaps from prior issue in a satisfying way and the artwork is consistently great. I'm anxious to see where the fellowship goes from here.Review: WYND #3 Assembles The Fellowship