Wonder Woman’s origin story isn’t quite as well-known as Batman’s or Superman’s. Batman v Superman has upped her popularity, and she’s an icon for feminism, but most don’t know her origin other than she’s from an island of Amazons, and her character is rooted in Greek Mythology. Well, famed comic book scribe, Grant Morrison has retold the origin story in DC’s “Earth One” line. The comic is a self-contained look at the character and her origins.

The “Earth One” comic line is a series of graphic novels that focus one character or team of characters. They’re written and drawn by some of the biggest talents in the industry, and all of them range from “great” to “good, but flawed.” Personally I love all the stories that have come out in that line. My favorite would have to be Teen Titans Earth One and Batman Earth One Volume One. Both are great new perspectives on the characters, and are wonderfully written.

Since Wonder Woman is one of my favorite characters of all time, and Grant Morrison is one of my favorite writers in the industry, I was pretty damn excited about the Wonder Woman Earth One. When I heard Yanick Paquette was going to be the artist on the book, my anticipation grew even larger. So, does it hold up? Or is this the first “Earth One” comic that should promptly be avoided?

The first thing to note is that the artwork is just phenomenal. DC has been killing it the art department lately, and Yanick Paquette’s artwork is no exception. There’s diversity with each design of the characters, the backgrounds are detailed and unique, and Paquette can create a sense of movement when there’s a lot of action. Plus it’s pretty cool to see a tall design of Wonder Woman. She dwarfs a lot of the characters, and it’s kind of cool to see her looking eye to eye with Steve Trevor.

So, the art is fantastic, and the book comes with some of Paquette’s sketches in the back that are a lot of fun. But, the real question to ask is, what of the story? Grant Morrison writes a strong story, but there are a lot of issues that may cause some eyebrows to be raised.

There is an issue with pacing here. The comic feels like there are scenes missing, sometimes we only get a few panels on one moment in the story, but then the comic will shift to another moment (sometimes through the narrative’s timeline) and it’ll feel kind of jarring. (To be fair though, that has been par for the course with most “Earth One” graphic novels.) Morrison uses a framing device for the story in the form of a trial for Princess Diana. The comic goes back and forth between Diana’s first encounter in Man’s World and the trial itself. The framing device is cleverly used, and raises a lot of interesting questions about the character and what she represents. However, because Morrison uses the trial as a framing device it leads to a very dialogue heavy comic. This isn’t necessarily a bad thing, but at times one has to wonder where the creators could have showed more and not told more. 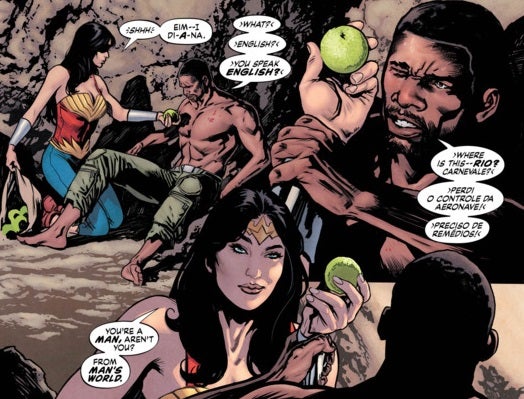 The meat of this story though is how Morrison handles the ideas of Wonder Woman’s femininity, feminism, and most importantly, the concept of “loving submission.” Yeah, there are talks about sexual submission and bondage in this comic. Admittedly it’s a little weird, and it might turn some people off (pun TOTALLY not intended), but Morrison handles these ideas with a lot of dignity and gives them all a fair look. He doesn’t glorify any of the attributes he’s examining, but he doesn’t demonize them either. Morrison gives a fair look at the concepts he wants to talk about and doesn’t shy away from any of the ambiguity that comes from the discussion. For example, Paradise Island isn’t a wonderful place where nothing goes wrong and nobody does anything wrong. Queen Hippolyta makes a lot of questionable actions in the name of loving submission He also doesn’t make Diana perfect, he makes her a little mischievous and yearning for something greater. There’s a lot to this story that is really unique, and hasn’t been explored in recent Wonder Woman comics.

I don’t feel like I’m smart enough to talk at length about these ideals of feminism, counter culture, and Bondage, but Morrison is. And he does so very well here that it’s worth reading about. If you’re put off by the concept, then this book might not be for you, but it might offer a new perspective on the character of Wonder Woman you may not have had before. It also is a throw back to the creator’s initial concept of the character that embraced and preached these concepts in the 40s.

There are some smaller issues that are admittedly odd, but they don’t ruin the story. Paradise Island for instance is a technologically advanced society, when it’s always been portrayed as a lost ancient Greek city. Fan favorite character Nubia is barely in it. Diana’s motivation feels a little “Disney Princess” like at times. And there could have been a bit more action in it. But, these are nitpicks; the story is great and you should definitely pick it up.

There is a caveat to that though. This book may not be great for kids (though to be fair the “Earth One” books are pretty adult oriented in general) what with the sexual themes, heavy dialogue, and slow pacing. But, this is definitely a great book to add to the collection, and I highly recommend picking it up soon.