WEREWOLF BY NIGHT #2, available from Marvel Comics on November 25th, cuts Jake’s teeth with his first big monster battle while Red Wolf and JJ track him down. Written by Taboo and Benjamin Earl, this issue reveals some interesting tidbits for the future.

Mike McKone’s cover is exactly what a reader is looking for in a monster brawl. Jake, in werewolf form, slashes and rips his way through the hybrids with feral energy. Amid the chaos, you’re instantly drawn to Jake’s eyes as his inner monster takes over the fight.

Picking up immediately after the end of issue #1 (read our Werewolf By Night #1 review here), Jake dives into an animalistic battle with the hybrids to save the caravan captives. The next morning, a battered but healing Jake finds he’s now on the run from the local law, Red Wolf, JJ, and the mercenaries hired by the Life Corporation.

The writing by Taboo and Benjamin Earl here – in a word – okay. This issue is more setup than a story with not much forward progress in the arc. It’s still an original premise, but it needs weight or emotional depth. I want to be invested in Jake’s situation, but you never get the sense he’s in any real danger or that he’s bothered by the burden of his curse, or that he feels much of anything.

The parts are there, the dialog is generally good, and the plot largely makes sense, but I need a reason to care about these characters. Right now, that’s the missing piece.

Jake’s werewolf is full-on powerful in every frame. The leaping, slashing, stabbing, and biting acrobatics fill nearly every panel beautifully. 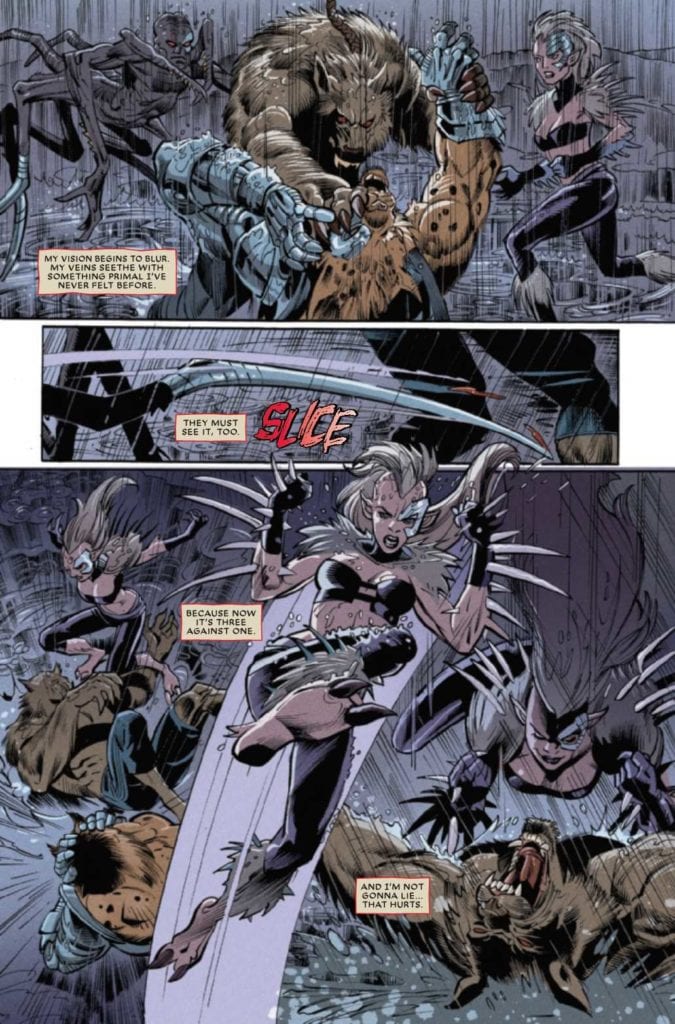 As a bonus, there’s an interesting few pages where Jake dreams of the werewolves in history, and it’s a treat to see Eaton and Hanna’s take on different werewolf forms. I especially liked the homage to the original Werewolf By Night. Overall, this was a visually enjoyable issue from Eaton and Hanna.

Miroslav Mrva’s earned praise in issue #1 for the excellent application of moonlight glow on the desert scenes for authenticity. Mrva scores again with beautiful reds and yellows during a desert sunset. Color is the musical score of a comic, and Mrva shows fantastic mood energy in the colorwork here. 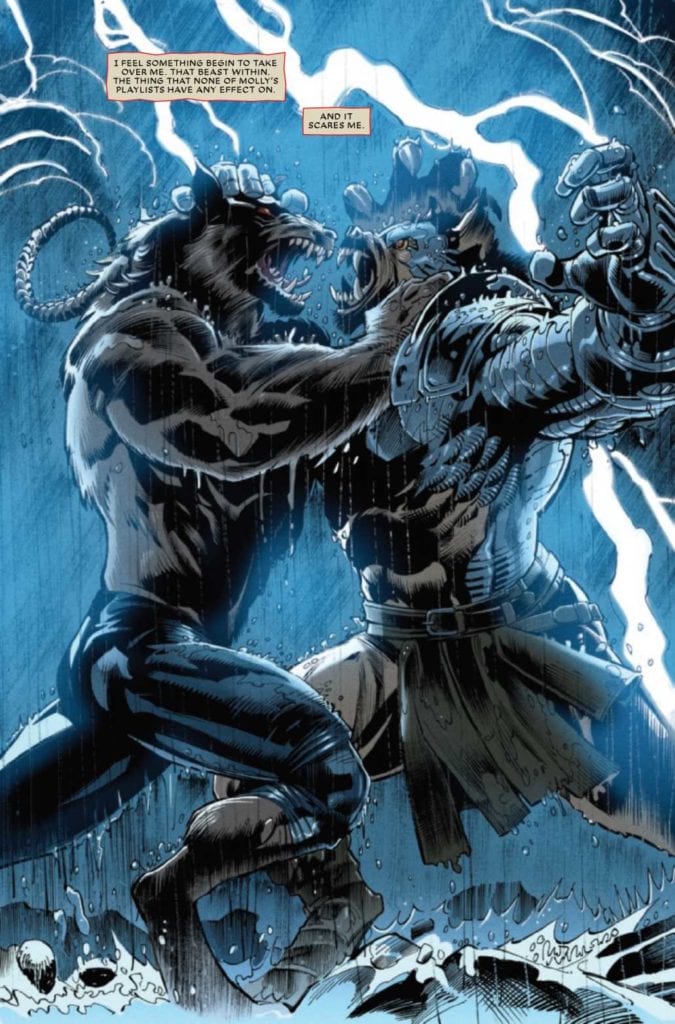 VC’s Joe Sabino is fairly solid in the placement and readability. But somehow, the lettering did not integrate well with the artwork in this issue. The word bubbles and caption boxes are much brighter and sharper than the panels they inhabit. In isolation, the lettering is good. Combined with the art, it doesn’t mesh well.

WEREWOLF BY NIGHT #2, available from Marvel Comics on November 25th, takes a few steps forward on the story and treats the reader with strong visuals. If the writers can add some emotional punch, this has the potential to be a memorable book. WEREWOLF BY NIGHT #2 is a guarded recommendation.

WEREWOLF BY NIGHT #2 takes a few steps forward on the story and treats the reader with strong visuals. If the writers can add some emotional punch, this has the potential to be a memorable book. This is a guarded recommendation.Review: WEREWOLF BY NIGHT #2 Loses Control