Vampirella’s enemies organize and grow in the shadows of Vampirella #5, out this week from Dynamite Entertainment. Meanwhile, the therapy sessions continue, delving into more and more of the character’s recent memories. 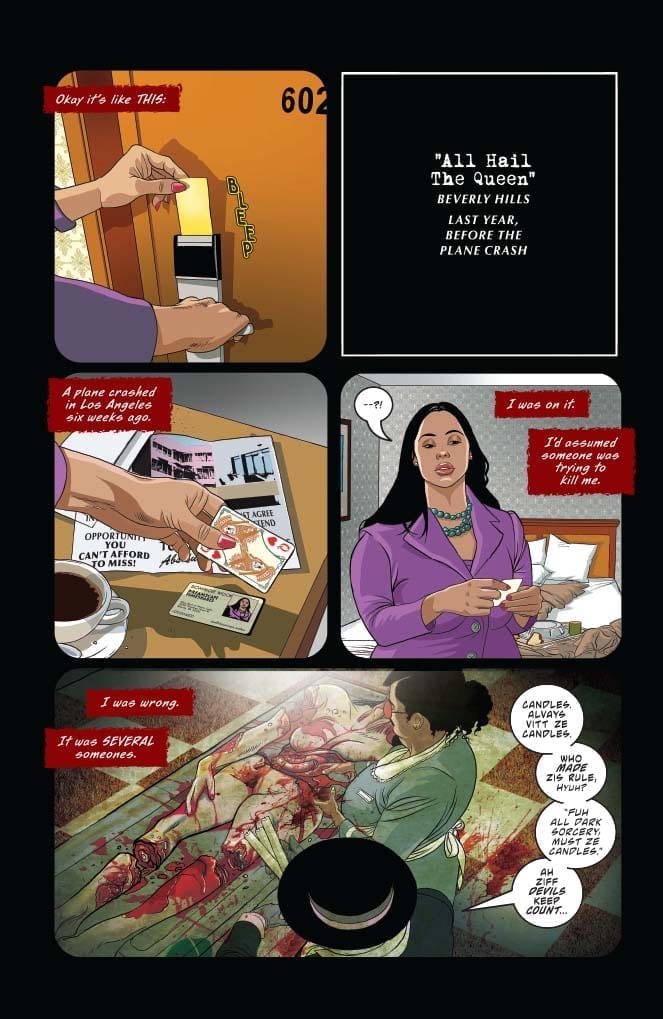 We spend most of the book’s first half in a flashback focused on our antagonists: Von Kriest, Blood Red Queen of Hearts, and now Nyx as well. In this way, we learn a little more about their plans (if not their motivations). We then pivot, focusing on our heroine in the second half of Vampirella #5, fleshing out her relationship with other characters.

Writer Christopher Priest has spent his run on Vampirella slowly constructing a distinct impression of the titular character. The book reads like a puzzle, with each issue adding details to provide a clearer impression of Vampirella, as well as the events she’s trying to relay to her therapist.

Time-hopping has been a cornerstone of the series since the first issue. We’re constantly pulled from the therapy sessions, which Priest uses as a framing device, to different points in the past. Rather than a conventional, linear plot, we experience events out of order, but uncover more details with time. In Vampirella #5, for example, we begin a year before our first issue, then leap to six months later, all relayed through a framing device in the present. It’s an interesting experiment…but the time jumps can be disorienting and chronologically confusing.

Even after five issues, we’ve yet to see the emergence of any clearly-defined plot. One can be unsure which events are key moments that motivate any larger conflict, or what that conflict may be. Because we’re not firmly-grounded in the narrative, the structure (or lack thereof) makes it hard to orient ourselves and figure out where—and when—we are. This problem could be especially pronounced for new readers who are unfamiliar with some of these characters.

Priest’s characterization was a little rough in our first few issues. By Vampirella #5, however, the dialogue seems to flow more naturally, and personas feel more realistic and compelling. The series is evolving into a compelling examination of Vampirella as a character…but the lack of a distinct narrative continues to drag it down. 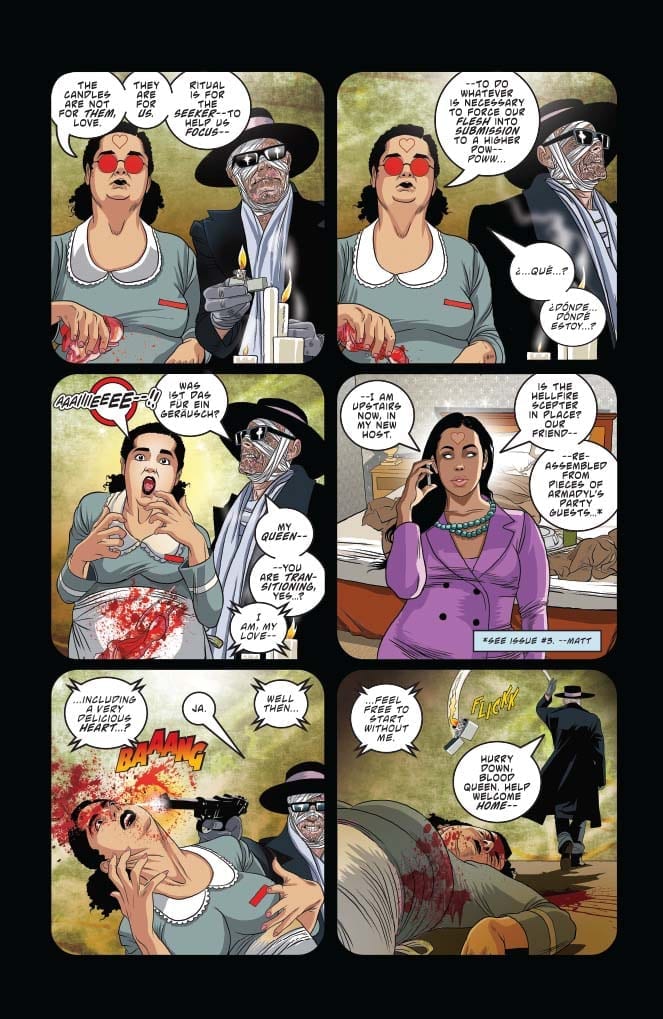 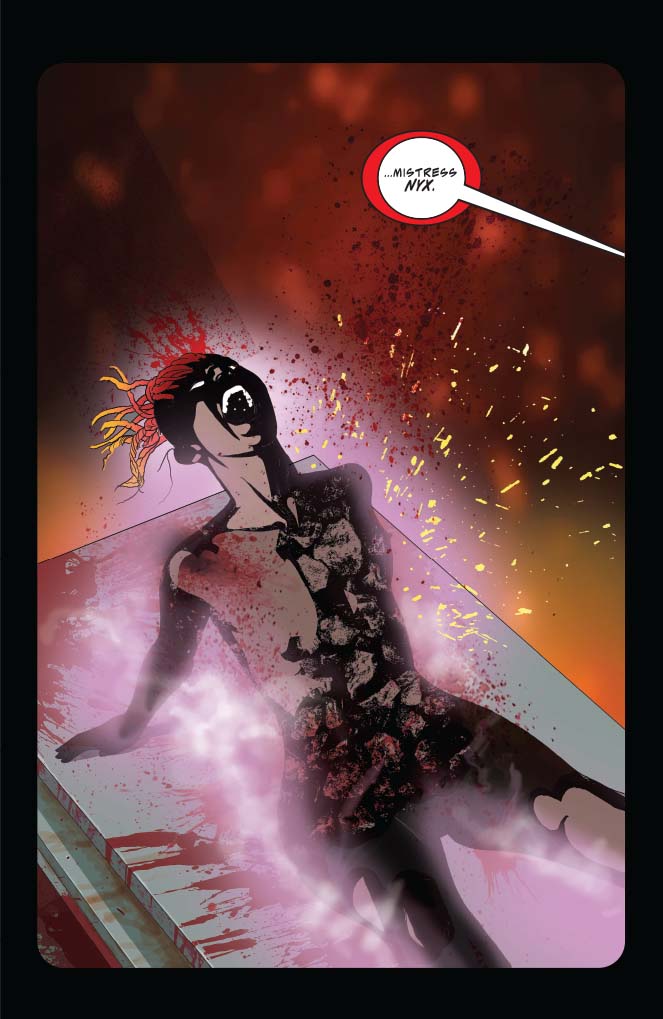 Artist Ergün Gündüz has a unique vision for the aesthetic of this series. He does a great job overall of composing panels, and occasionally gives us some very striking imagery.

That said, the level of detail employed varies throughout the book. In some panels, we see meticulously-thorough illustrations of backgrounds and environments, while in others, the background recedes, focusing the reader’s attention solely on the characters. While this approach can accentuate the figures in the composition, it’s not always the most visually stimulating.

In addition, the figures themselves can still be rather stiff from time to time throughout Vampirella #5. While generally looser and more natural than in some previous issues, there are moments when characters appear to simply stare into space, like a mannequin.

Gündüz’s color work, however, is excellent. We have a wide palette of colors on display; the visceral red gore and fiery, ethereal glows catch the reader’s eye, but don’t overshadow the rest of the page. It’s flashy, but well-balanced, highlighting the artist’s subtle skill. 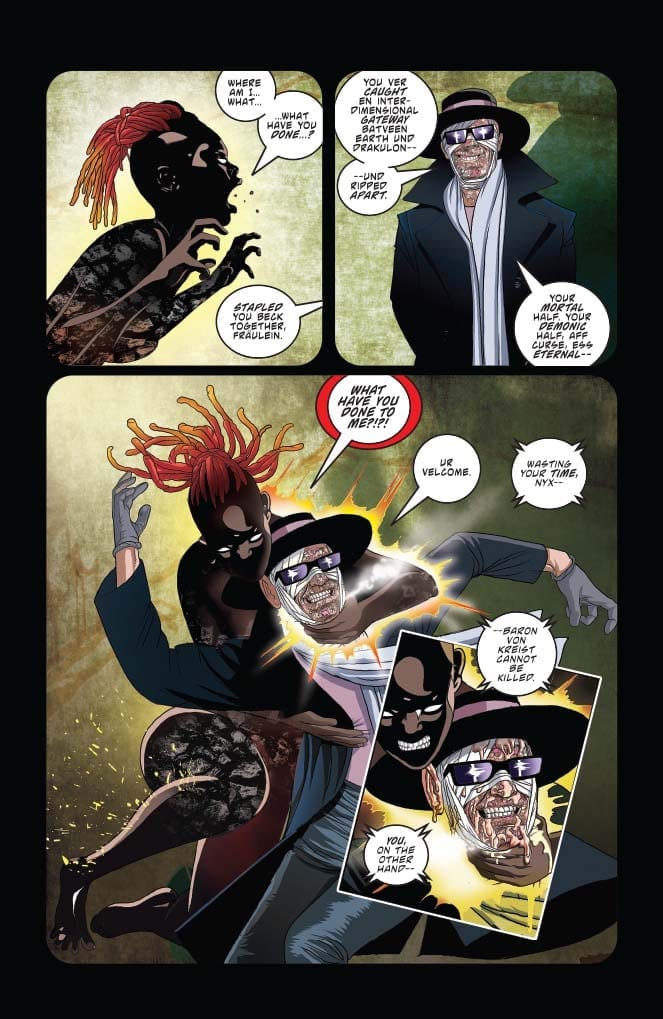 Vampirella #5 continues to offer an interesting impression of this iconic character. If there were a story to accompany the study, we could reall have something here. As is, though, it still feels rather directionless and meandering.

With each issue of his run on VAMPIRELLA, writer Christopher Priest has continued to delve into what makes the titular character tick. It's a fine character study, but five issues in, we still have little in the way of narrative, structure, or direction to hold the reader's interest.Review: VAMPIRELLA #5 Offers Great Characterization, Minimal Story