Debuting in Walmart exclusive Titans Giant #1, #2 this new Titans story is available to the Direct Market for the first time as Titans: Burning Rage #1. Written by DC Comics veteran  Dan Jurgens, Titans: Burning Rage #1 is an easy starting point for those interested in this long-running team. Let’s call it Titans #1 for brevity’s sake.

Jurgens throws us straight into the action with a confused Beast Boy delivering pizza to his Titan teammates who seem to be absent from their T-shaped building. With a crackle of purple air Raven arrives to wisp the green hero to help the other Titans. Once on the scene of S.T.A.R. Labs Jurgens and team introduce us to one of our villains for Titans #1; The Disruptor. Wanting to amplify his power he breaks into S.T.A.R. Labs to steal an Amplifier, which name explains itself. Gotta love naming schemes. 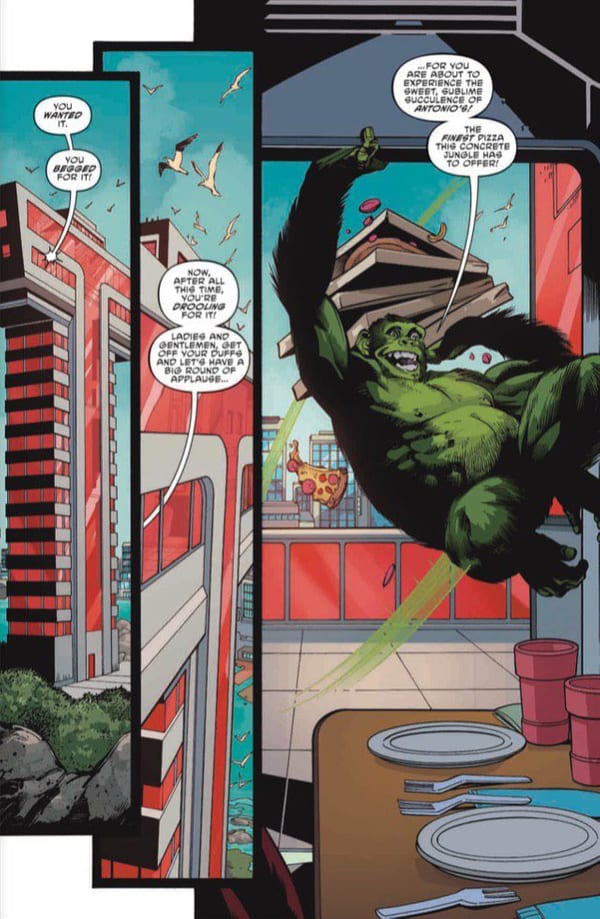 Failing in his task due to the Titans effort Disruptor returns to H.I.V.E., now this is where that spoiler warning comes in. Back at base Robin playfully throws the container the Amplifier resides in at Beast Boy. First off, why would you throw something such as that? That alone makes no sense especially for someone trained by the likes of Batman. To make this scene worse the container is empty, meaning Disruptor was in fact able to steal it. Why didn’t Robin check it at the scene? If it was any Titan other than Robin that could be understandable, alas it’s not, making it seem out of character.

This is the only blemish in a well-written entry issue by Jurgens that seems to not take place in DC’s canon, making it more of a side story. This and the great team introduction page midway through makes Titans #1 a fantastic opportunity of being an entry point for anyone interested in the Teen Titans. Jurgens writes each character unique and true to his or her incarnations while sprinkling in elements for fans of the past, showing how well-versed and caring he is in this universe.

The line art by Scott Eaton and Wayne Faucher’s inking reflect this ease of excess for newcomers. With each character’s action being drawn fluidly making it easy on the reader’s eyes while drawing them towards the next element. The fighting doesn’t involve anything unique or groundbreaking but this works out for the better with each moment being clear and precise. This simplicity shines in the aforementioned Titans training page with a single page showing all characters in action then transitioning into smaller panels spotlighting each member’s powers and wonderfully lettered name/logo. 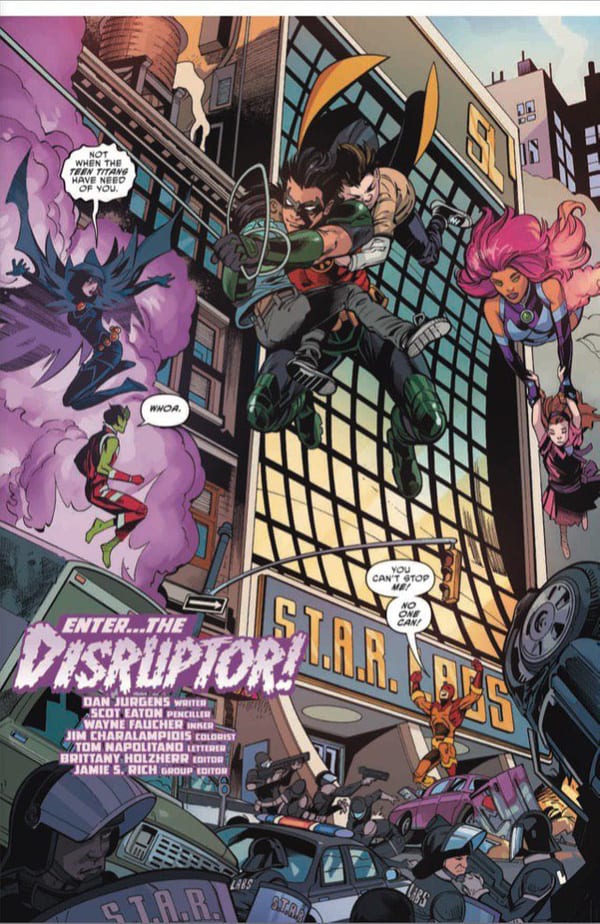 Jim Charalampidis’ colors fall in line with the theme of easy access with a palette that’s pleasant for the eyes. With no colors clashing with each other or overpowering another we get what is essentially a perfect balance of a color spectrum that isn’t too much at once.

Jurgens storytelling for Titan #1 blends effortlessly with Eaton and Faucher’s fluid action. These elements mixed in with Charalampidis colors make for a great first issue for long-term Titans fans and new alike. The only abnormality in the color department being Starfire’s hair color difference on the cover and inside the comic.

Side Note: It’s weird that DC calls it Titans: Burning Rage when the team themselves say Teen Titans. The main difference being the Titans usually are in their late teens, whereas the Teen Titans are just that; teens. But tomatoes potatoes, right?

Side Note 2: The T-Tower is one of the cooler comic bases. No, that’s not up for debate.

“But when you keep me from my pizza, you’ve gotta pay.” – Beast Boy.

I’m going to side with you on that Beast Boy, don’t mess with another’s food or food time!