After a long hiatus, The Walking Dead has returned. The first half of the season covered the introduction of Negan, the series’ new antagonist. The show spent a lot of time covering just how evil Negan is this year. Now, after watching the group suffer under his rule, they’re finally taking a stand. “Rock in the Road” doesn’t have a LOT of action, mind you. However, it does kick off the change that could make The Walking Dead flourish again.

Kicking off Rick’s stand is, of course, bringing the world together. Rick tries negotiating with Gregory and Ezekiel – with, predictably, little success. Gregory is still a selfish whiner, adverse to the idea of taking a stand. Ezekiel is a proponent of peace, hoping to keep his deal with the Saviors. Ezekiel is a lot like Morgan in this regard – Morgan, who also dislikes the idea of a stand. Thankfully, while the leaders seem fearful, their subjects do not. Even with the repetitive avoidance on conflict on their part, Rick is becoming a driving force for action again. 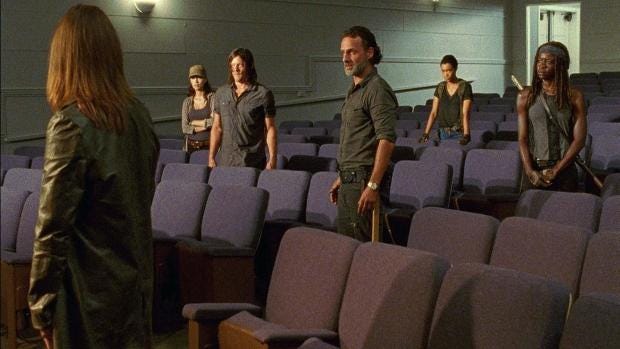 It’s a bit of a bummer to see the gang splintered again. Now that the gang is uniting, the squad splitting up once more feels repetitive. Obviously, it isn’t a huge split. As one group heads back to The Hilltop, the other group tries to follow the newly elusive Gabriel. It’s probably not a split that will last as long as the solo outings from earlier this season. But The Walking Dead has always had problems dedicating whole episodes to side characters. Hopefully, the conflict with Negan won’t lead to a lot of separated group episodes.

The cliffhanger ending is an odd mix of promising and worrisome. On the one hand, it’s very likely Rick has found his army. All these new people could give the gang their much-needed force. However, all these new people would hint at a new colony to care about. While the show does need more action, it doesn’t need yet another survivor community. We already have Alexandria, The Hilltop, The Kingdom, and whatever that all-lady community was called.

This episode isn’t the strongest episode for action or character development. However, it does hint at a change that could make for a strong latter half of the season. The gang is actually fighting for something, meaning there’s something to look forward to. Carol’s found a good line of capable badass and careful isolationist. There’s not much zombie fighting, but the zombie trip-wiring is pretty amusing. There’s bound to be more deaths, as well. That Aaron-husband chat hints that Aaron may be up at bat next.

Speaking of, this is one of the only season 7 episodes that doesn’t rely entirely on Negan’s villainy to drive it. That’s the part of The Walking Dead’s return that I find most exciting. Negan brought life back to the show, but he quickly became a crutch for the series. Now it looks like the creative team, much like the protagonists, are finally ready to take back what’s theirs.