Review: THE TRUE LIVES OF THE FABULOUS KILLJOYS: NATIONAL ANTHEM #1 Turns On, Tunes In, and Makes Noise

Writer Gerard Way (Umbrella Academy, Doom Patrol, and a singer of a semi-popular little musical act known as My Chemical Romance) joins with co-writer Shaun Simon and artist Leonardo Romero to return to tell the tale of what started the Killjoy’s ride against capitalist censorship and rad times in “The True Lives of the Fabulous Killjoys: National Anthem” #1. Along with colorist Jordie Bellaire and letterer Nate Piekos, this first of six issues attacks its readers with sensory overload and creative narration, aided by outstanding artwork and an impossible to dislike aesthetic. Equal parts The Invisibles and They Live!, “National Anthem” is sure to be a hit with fans of Way’s work and batshit crazy comics fan alike.

“After the Analog Wars, the Killjoys lost their way — and their memories. A rat chews through Mike Milligram’s TV cord, and reality unravels. But when his Ramones records disappear, Mike remembers what the Fabulous Killjoys and some toy rayguns can do. Gerard Way and Shaun Simon take it all back to their original concept, rebooting the Killjoys in present-day America, where it’s impossible to tell what’s real and what Mom and Dad just tell you to keep you calm.” 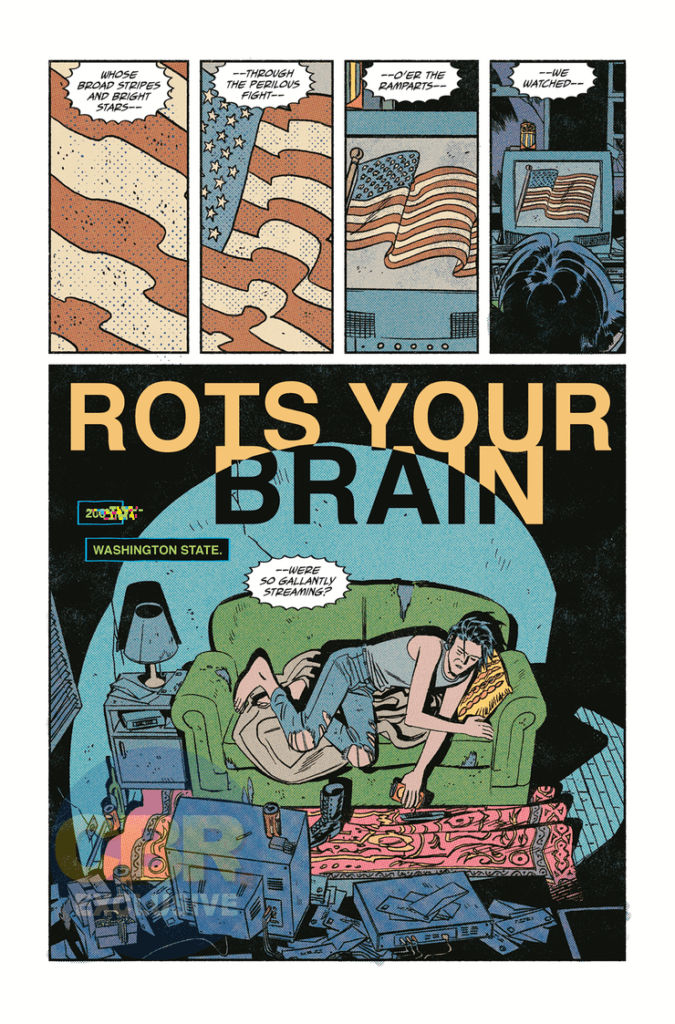 This series’s standing as both a prequel and a soft reboot of the original Killjoys story honestly strengthens “National Anthem” in terms of its readability and its ability to stand alone as a comic. Gerard Way and Shaun Simon blast the reader with esoteric information at a lightning pace as it is, so not being relied upon to have read the previous series for better understanding helps out by itself. This being said, having read the previous series, as well as Way’s other works and knowing the aesthetic and style of My Chemical Romance’s Danger Days album, which this comic is based on, will help prepare you for its unapologetic weirdness. Make no mistake, this is a “weird” comic. Way has worn his love of Grant Morrison’s work on his sleeve both in-person (Morrison actually portrayed the villain in a couple MCR music videos for Danger Days) and in his own writing. In many ways, this feels like a love letter to the Mad Scotsman’s own style. The way that Way and Simon use both outlandish and unnaturalistic dialogue, as well as almost frantic chaos-poeticism will be welcome to readers who anticipate and/or enjoy this style, but could be alienating to those who won’t see it coming.

While I understand Way’s love for Morrison’s style and writing approach (he’s one of my favorites as well), there’s a point where tribute becomes emulation. “National Anthem” comes very close to hitting that point. When I said earlier that this comic is a mixture of The Invisibles and John Carpenter’s They Live, I meant that literally. This issue really does read like an Americanized retelling of Morrison’s Vertigo counterculture epic mixed with the anti-commercialization messages of Carpenter’s film quite clearly in blatant black and white. For anyone who is somehow unfamiliar with these works and still reads comics, then this won’t be an issue. However, as much as I enjoy this book, it’s so blatantly obvious that it has to be called out. Even with this gripe though, it’s hard not to be impressed with the sheer talent and panache that Way and Simon pull off this comic’s written execution. Not only does it move at a lightning pace without ever losing the audience, but it accomplishes an insane amount of storytelling for a 48-page issue. Yes, that is a double-sized comic, but the pacing and plot traveled in that span is seriously impressive. Way and Simon do such a stellar job at familiarizing the reader with this insane world and its cast while also nailing down this esoteric writing style that it’s hard not to be impressed by this comic’s sheer bombastic-ness. 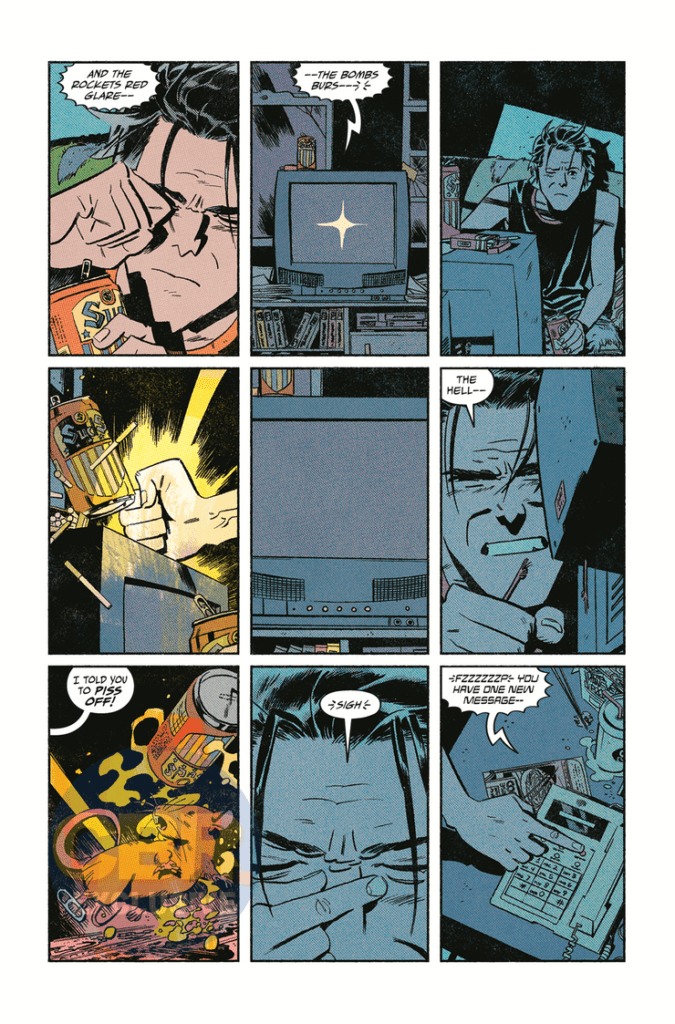 The pencils of Leonardo Romero in “Killjoys: National Anthem” #1 are just as eloquently everywhere-at-once as the script, offering a multitude of styles while maintaining a detailed professionalism that’s difficult to replicate. There’s a mixture of pop-art, Ditko-vividness, Richard Case weirdness, and modern stylings that make this comic just such a damn treat to look at. Romero actually has a semi-similar artistic style to original Killjoys artist Beck Cloonan, but with thinner lines and sharper detail. Bringing Way and Simon’s vision of desolate wastes, 50′ Americana, and inter-dimensional monstrosities to life has got to be an insanely daunting task, but Romero eats it alive here. His visual direction is a huge part of what makes this comic such a fast-pace shot of lighting to read, as each page shows off major segments of story but manages to take its time to allow the weight of every moment to hit. All the while, it feels like that tunnel in Willy Wonka. The other massive component to this book’s success is Jordie Bellaire’s coloring. The neon and vaporwave crossed over with the vivd retro aesthetics of Steve Ditko, all covered with a newsprint varnish makes this comic’s desired aesthetic. Each page spits Bellaire’s vibrant work and pulls you deep into this comic’s world and concept. The lettering from Nate Piekos is distinct, borrowing font styles from silver age comics but with the bolds and effects of modern comics. This is a visually outstanding book, with an aesthetic that pays tribute to a classic era while also being wildly original. 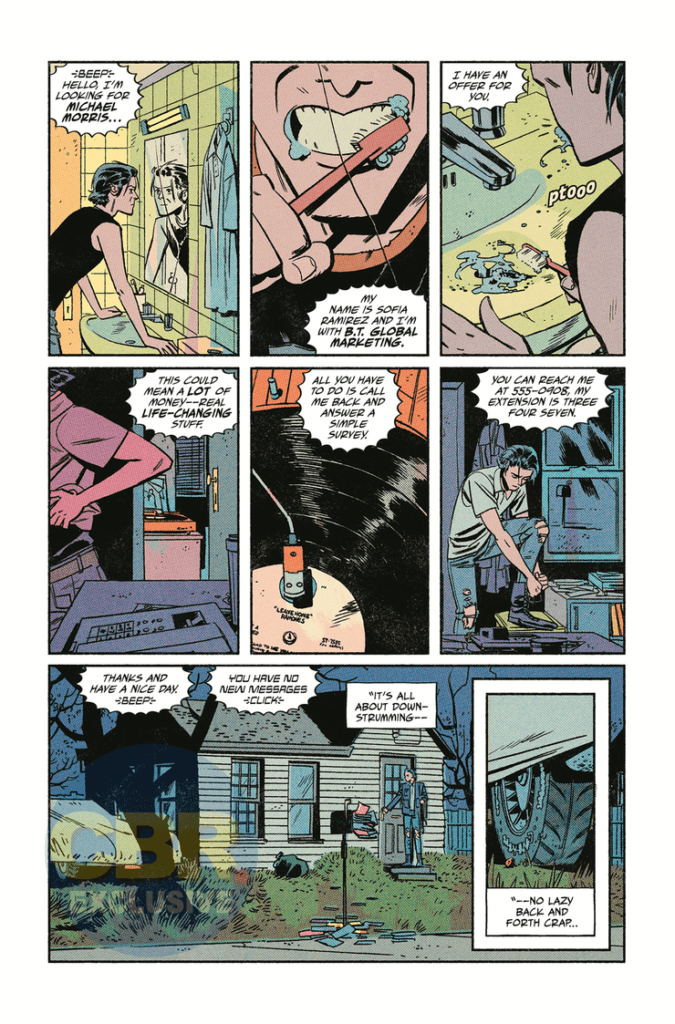 ‘The True Lives of the Fabulous Killjoys: National Anthem” #1 is a shot of psychedelic adrenaline from the land of inter-dimensional rock and roll. It’s an obvious connection to the works of Grant Morrison and other counter-culture material makes little impact on how much fun this first issue is. Gerard Way and Shaun Simon’s script is written with a pace shot out of a cannon and laced with slick prose. The visual work from Leonardo Romero and Jordie Bellaire is astoundingly rad, with waves of light and color that you can almost hear. If you’re a fan of the original Killjoys series (MCR album included), or just like weird and insanely cool comics, be sure to grab this issue when it hits shelves at your local comic shop on 10/14!

A spectacularly frantic return to Gerard Way and MCR's insane counter-culture fight song of a comic.Review: THE TRUE LIVES OF THE FABULOUS KILLJOYS: NATIONAL ANTHEM #1 Turns On, Tunes In, and Makes Noise