Review: THE TERRIFICS #26 And The Fall Of Simon Stagg

Simon Stagg, billionaire industrialist and constant thorn in the collective foot of most DC Comics heroes, is the focus of THE TERRIFICS #26. Available in comic book stores on Wednesday, March 11,th this issue features the recent corporate and technological collaboration between Stagg Industries and Terrifictech, the brainchild of Michael Holt and The Terrifics. Both companies have pooled their knowledge and finances to create “the world’s cleanest, fastest, and most reliable public transportation system!” On the surface things seem to be going swell, but Stagg is harboring a dark secret that could upend the city itself.

The issue kicks off with an extremely aggrieved Stagg alone in his office. The seemingly untouchable businessman just received news from a doctor that he has pancreatic cancer. Fearful and losing hope fast, Stagg contemplates how he will break the news to his wife, Sapphire. 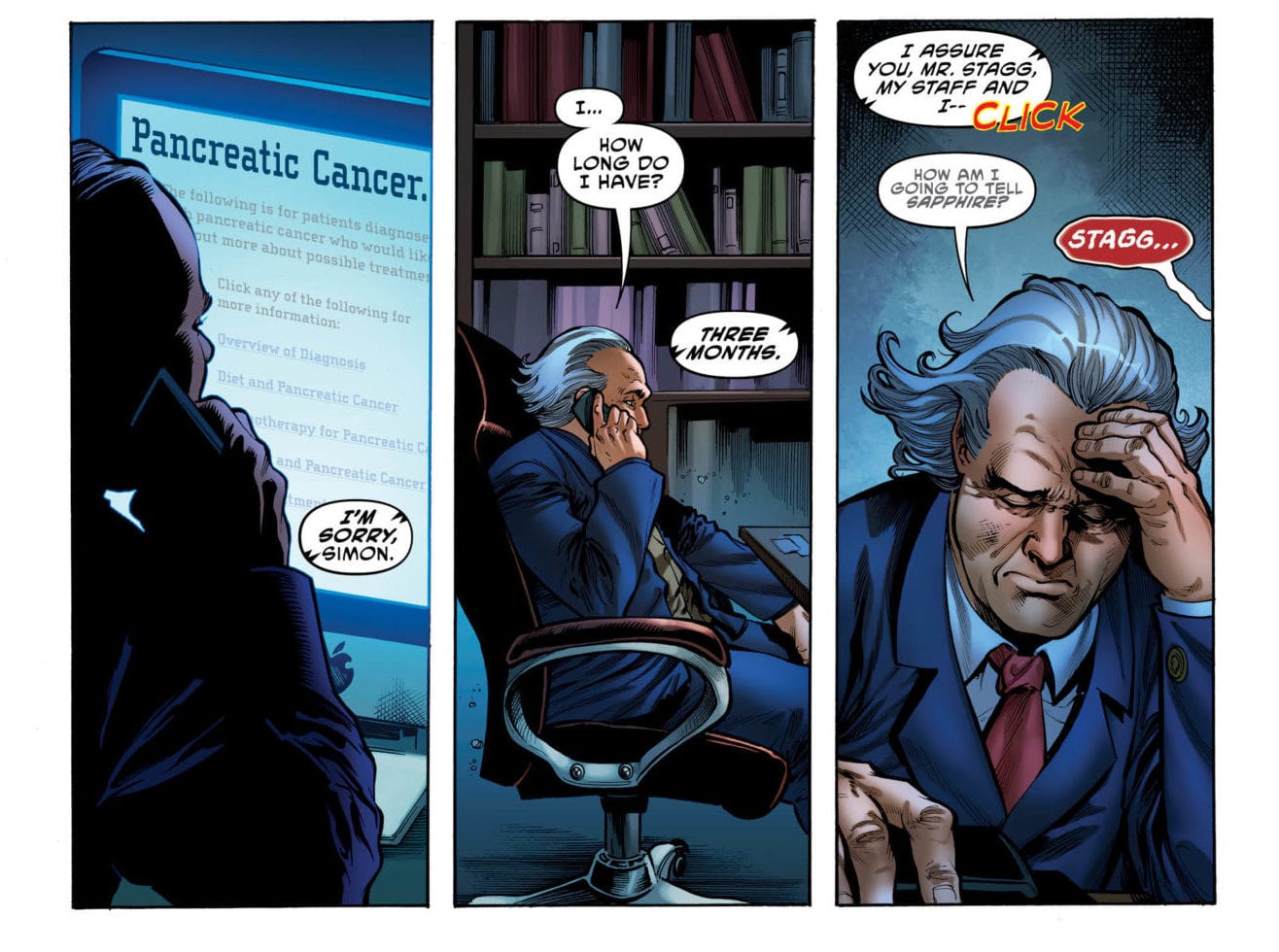 But at that very moment Stagg hears a voice calling to him from the hallway. Believing it to be one of his employees, he storms into the hallway only to discover demon-like creatures starring at him from the darkness. They offer him a gift that he most wants right now: time. 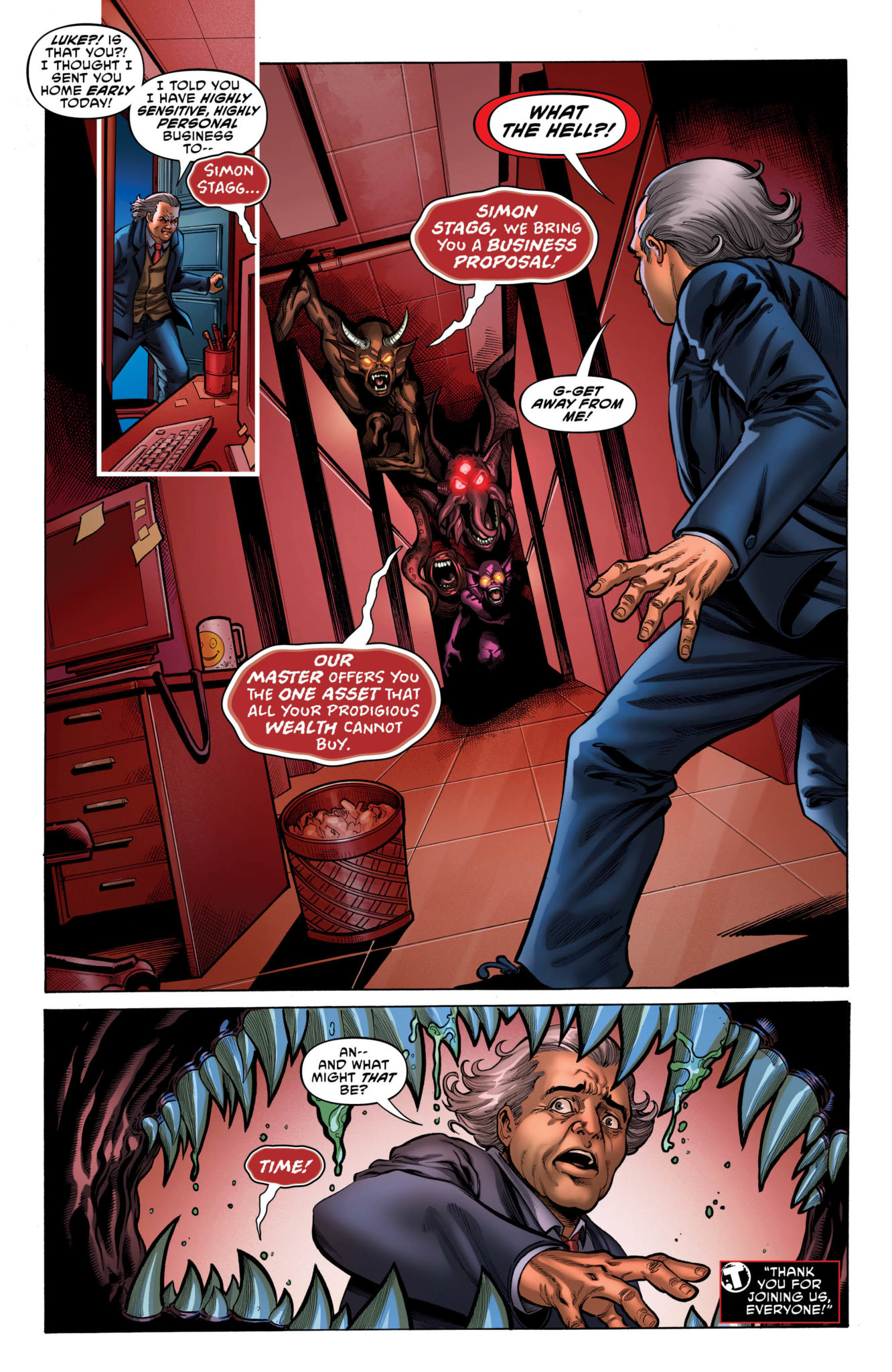 Unfortunately, the nefarious nature of the deal undoubtedly comes with a price. And the Terrifics will soon find its effects erupting right under their noses.

Writer Gene Luen Yang’s narrative embodies the fear and desperation most often plaguing those of us who have received unbearable news. Though few of us have been approached by demons, it’s easy for us to sympathize with Stagg’s circumstance. This makes him that much more of a complicated “villain.”

Sergio Davila’s penciling, along with Vicente Cifuentes’s ink work, craft highly detailed figures that embody the realizations of a fully technological cityscape that border on the fantastic. The high-speed transportation system and other forms of technology are emboldened by solid cool hues to give the landscape a futuristic vibe, all thanks to Protobunker’s coloring. However, Tom Napolitano’s lettering is the icing on the cake, using rapid successions of onomatopoeia lettering interspersed between the characters’ dialogue, creating just enough chaos to speed the narrative forward. 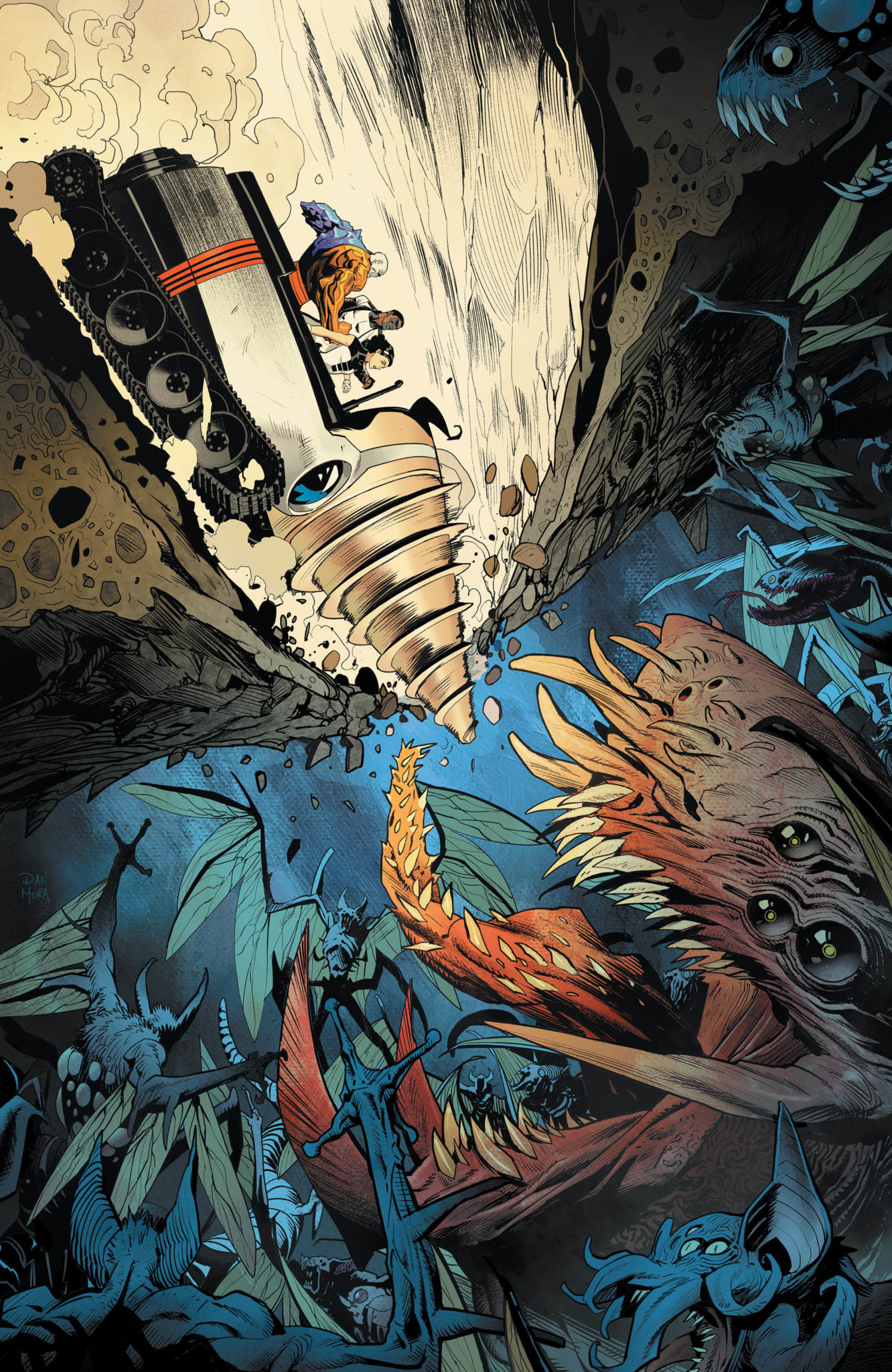 Dan Mora’s cover, featuring the team of heroes drilling into the dirt of the earth, offers a perfect contrast to the highly sanitized future vision the opening pages offer. It suggests that no matter how much we progress, there may still be something lurking deep under the surface.

THE TERRIFICS #26 is a high-speed thriller that shows both how far our society has progressed and how deep our fears continue to take root in our psyches. A flurry of demonic machinations and technological prowess combine for a highly entertaining issue.

Do you think the Terrifics will be able to help Stagg? Let us know in the comments below!

Review: THE TERRIFICS #26 And The Fall Of Simon StaggWriter Gene Luen Yang’s narrative embodies the fear and desperation most often plaguing those of us who have received unbearable news.