Review: THE ORVILLE #2: DIGRESSIONS (PART 2 OF 2) Shows Why Each Member Of A Team Matters

THE ORVILLE #2: DIGRESSIONS is available in comic book stores on Wednesday, June 2nd, wrapping up the two-part Digressions storyline. Readers will remember the startling changes to the status quo last issue when the crew (and the world itself) was thrust into an alternate timeline.

In this universe, Kelly Grayson never ended up marrying Ed Mercer, which in turn prevented the events that led to the Orville’s team formation. What’s more, Kelly learns getting the team together is the only way to prevent the coming attack from the Kaylon.

Kelly finds herself in a desperate situation. Being the only person who knows what will happen in the future leaves her with a huge responsibility. We can practically feel the urgency emanating from the page. 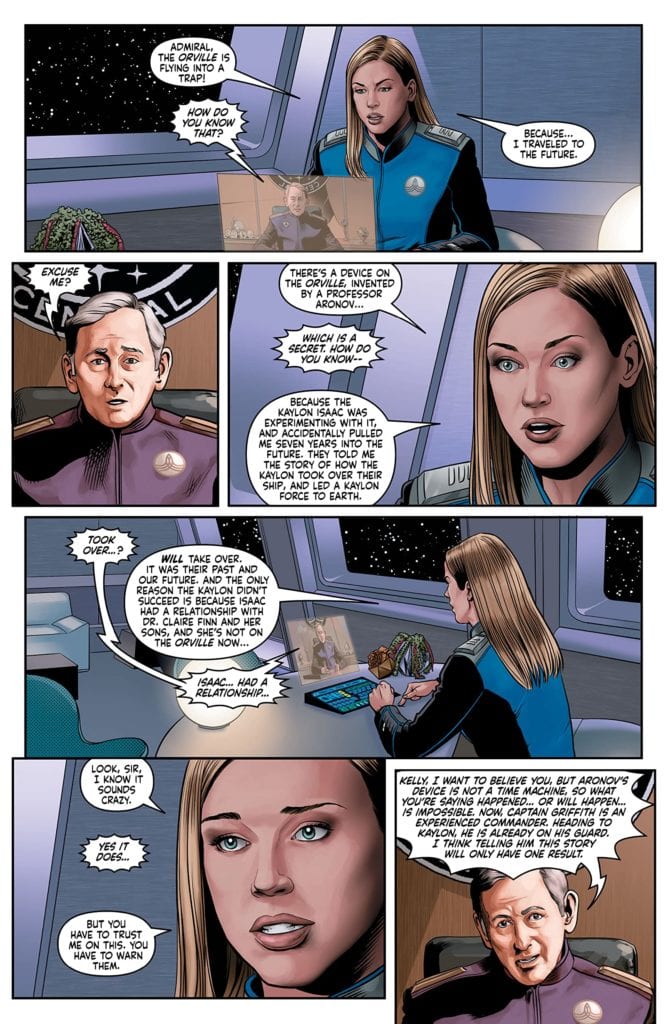 This story diverges from many of the previous plotlines in its focus on Kelly and Dr. Claire Finn rather than Ed. This issue shows the former leader not in any position to prevent an alien invasion. In fact, he’s not even aware of a coming crisis. 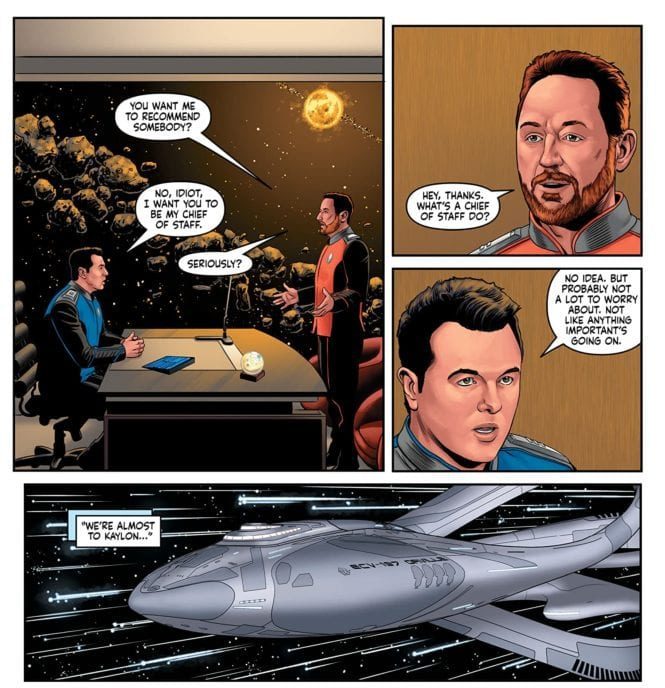 David A. Goodman’s script, while providing readers with an intriguing take on theories of time travel, does a brilliant job of highlighting the supporting members of The Orville’s former team. If it wasn’t clear before, we see how these “secondary” characters are actually more integral to the fate of the world than Ed himself.

David Cabeza’s penciling and ink work offers readers realistic depictions of their favorite characters from the hit TV show. The characters’ expressions mirror those of their real life counterparts, drawing readers into their experiences. Michael Atiyeh’s coloring used a wide array of hues ranging from bright cool colors to darker shades to reflect the mixture of hope and despair in the story. And Richard Starkings & Comicraft’s Jimmy Betancourt’s lettering is differentiated well so as not to confuse readers.

THE ORVILLE #2: DIGRESSIONS culminates in perfect fashion after such a wild ride in previous issues. It also gives the incredible character of Kelly an opportunity to shine.

What other stories do you want to see played out in this series? Let us know in the comments below!