Review: THE OLD GUARD VOL. 1 – OPENING FIRE – Do You Want to Live Forever?

With Netflix releasing a movie based on the original story by writer Greg Rucka and artist Leandro Fernandez on July 10, 2020, it is worth taking a look back at The Old Guard Vol. 1 – Opening Fire. Joined by colorist Daniela Miwa and letterer Jodi Wynne, Rucka and Fernandez’s story is an action-filled tale taking on themes that are as old as humanity: death and the hope of immortality.

The strength of Rucka’s writing has always been the grounded characters he places in his stories. In this case, soldiers Andy, Booker, Joe, Nicky, and newcomer Nile, a group of nigh-immortal humans and guns for high. When they are betrayed by their business associate Copley (and later we find out, one of their own) to the villainous Steve Merrick, a self-described ruthless big pharma businessman who hopes to unlock the secret of immortality by kidnapping these soldiers, they all figure out exactly what it is that they’re living for.

Honestly, the villain of this story is pretty forgettable. Think of Merrick as any douchey, ‘roided up Vin Diesel antagonist. He’s a pretty two-dimensional villain, but this story isn’t about a compelling villain, but the struggle with immortality for those for whom life has ceased to be meaningful. As time marches on and loved ones pass on, what is left but their fading memories, followed by more of the same? This is what makes Rucka’s tale compelling, learning to live, and find meaning in a world that one has grown tired of.

Fernandez’s art is serviceable for the story. He certainly never shies away from blood, but he doesn’t distract from the thematic heart of the story by overemphasizing the gory parts of the story. A story like this, with a bunch of nigh-immortals who easily heal from their injuries, particularly lends itself to highlighting the wounds and injuries of the protagonists. However, while Fernandez doesn’t shy away from portraying the injuries of the story’s protagonists, he relies on the use of blood splatter and shading that communicates the extent of the injuries without focusing an undue amount of attention on them. 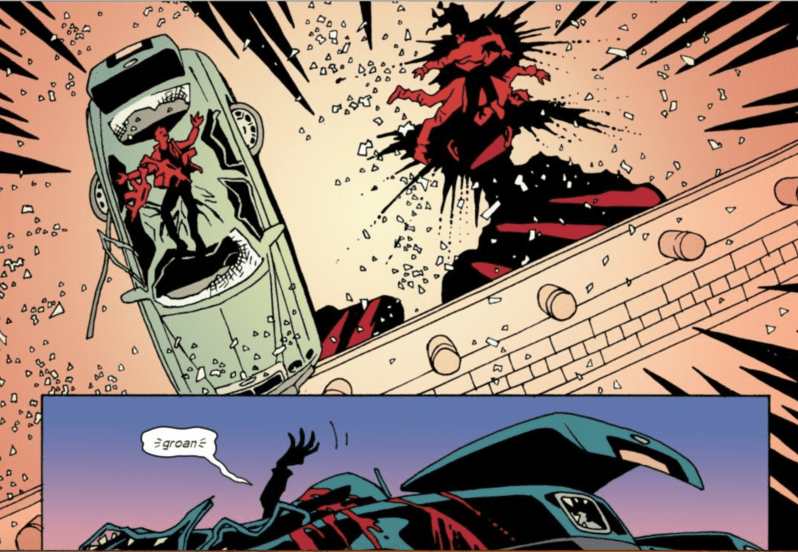 It’s not that the grotesqueness of their injuries are never shown, but for such an action-heavy comic, Fernandez’s portrayal of the violence inherent in the story is pleasantly restrained in a way that services the story.

Miwa relies on a muted color palette, which fits the tone of the story. Old Guard is about a world that has “lost its shine” for its protagonists. They’ve lived long enough to long for the endless cycle of life to end. Of course, Miwa, along with Fernandez, should be credited with the restraint they show in portraying the violence in this comic. Rather than highlight every bit of brain and viscera that the protagonists’ injuries lend themselves to, they opt for something that services the story in a modest way.

The lettering in this issue is great. Wynne doesn’t add any flourishes to necessarily distinguish one character’s dialogue from the other, but whether she’s lettering dialogue in person, over the radio, or narrated voice-over, she keeps the story moving.

One part of the lettering I particularly enjoyed was the sound effects. There is a memorable scene where Andy and Booker get into a fight and start shooting each other. Nile, in her frustration, decides to put an end to the fight. 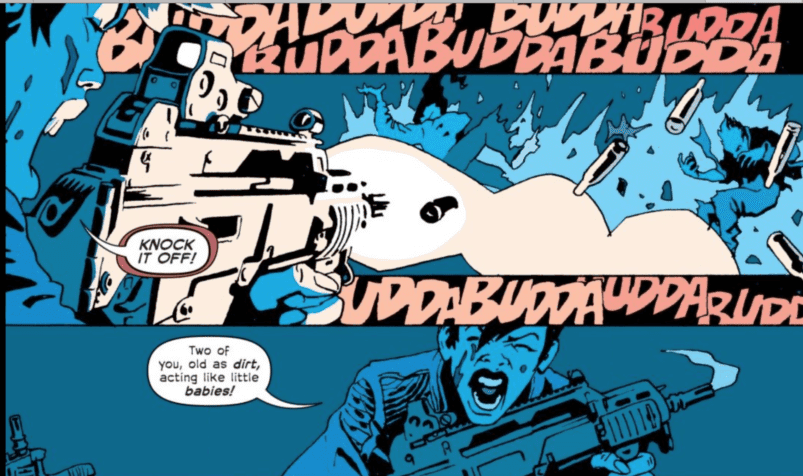 I may have laughed out loud when I flipped the page to this scene! Great use of sound effects here, and again, while I don’t show it here, Andy’s and Booker’s injuries aren’t shown in overly graphic detail.

As a long-time fan of Rucka’s work at DC, it was a pleasure to read some of his creator-owned material. While dealing with extraordinary circumstances and weighty themes, Rucka keeps the story grounded in the lives of his characters. I will say, per my comments about Merrick earlier, that I am afraid that Old Guard will receive the Bloodshot treatment in its film debut. Bloodshot was certainly a serviceable film, but still a relatively shallow Vin Diesel action flick. My fear is that the thematic richness of the story will be lost in a film adaptation, but we’ll have to wait and see.

The Old Guard Vol. 1: Opening Fire tells the story of a group of nigh-immortal soldiers living in a world they've grown tired of. When they are betrayed in order to learn the secrets of their immortality, they may in fact find something to live for after all!Review: THE OLD GUARD VOL. 1 - OPENING FIRE - Do You Want to Live Forever?