RONIN ISLAND #9, available in comic book stores on Wednesday, January 8th, unveils a pivotal event in the world of Hana and Kenichi. After weeks of fighting and eluding the Shogun’s army, the young samurai has finally arrived at Ronin Island. Her team is ready to warn the islanders of the impending invaders. Will they welcome our heroes with open arms? Or could their long-held ideals of welcoming withered away under the winds of fear?

As the large mass of fused Byonin makes its way toward the Island, Hana retreats in her mind and recalls her first encounter with Elder Jin. The young girl feels unwanted by the rest of the Island. 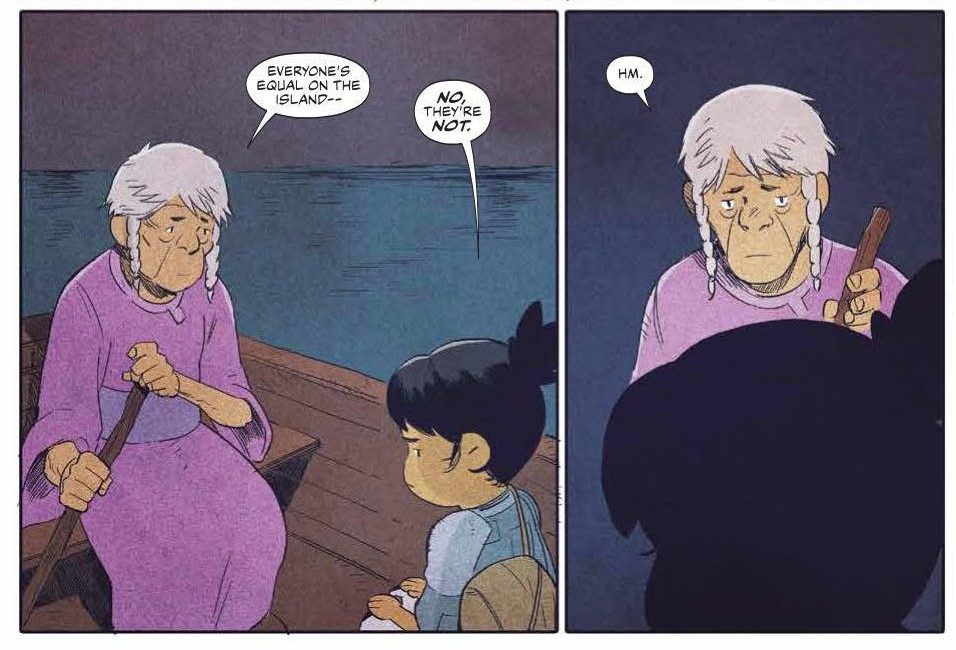 Jin, attempting to soothe Hana with platitudes of the Island’s equality and open-mindedness, is shut down immediately. Hana offers up her own lived experience of exclusion in spite of the community’s espoused ideals. So, with an amazing sense of understanding, Jin instills within her a sense of confidence due to her ability to bring people together. 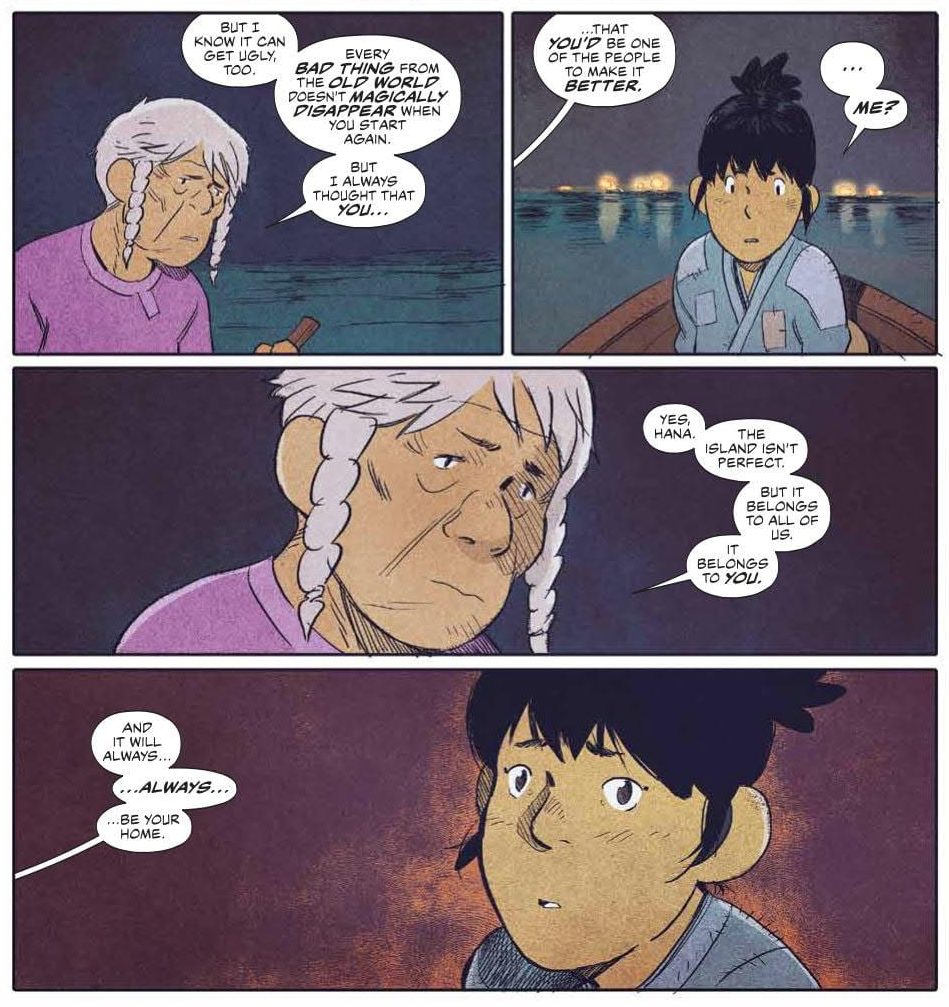 This flashback is placed here to serve as a diametrically opposed scene to what Hana and her companions meet next. Upon arriving at the Island, Jin refuses to let the wayward travelers back into their community, citing their desire to protect themselves from those intimidating forces on the outside. This betrayal hits Hana hard, making her question the ideals of “togetherness” and “equality” the Elder taught her so long ago.

Writer Greg Pak weaves together a narrative that hits home with its themes of familial estrangement. When Elder Jin rejects Hana and her friends, readers witness an abandonment of the community’s ideals in service of fear. 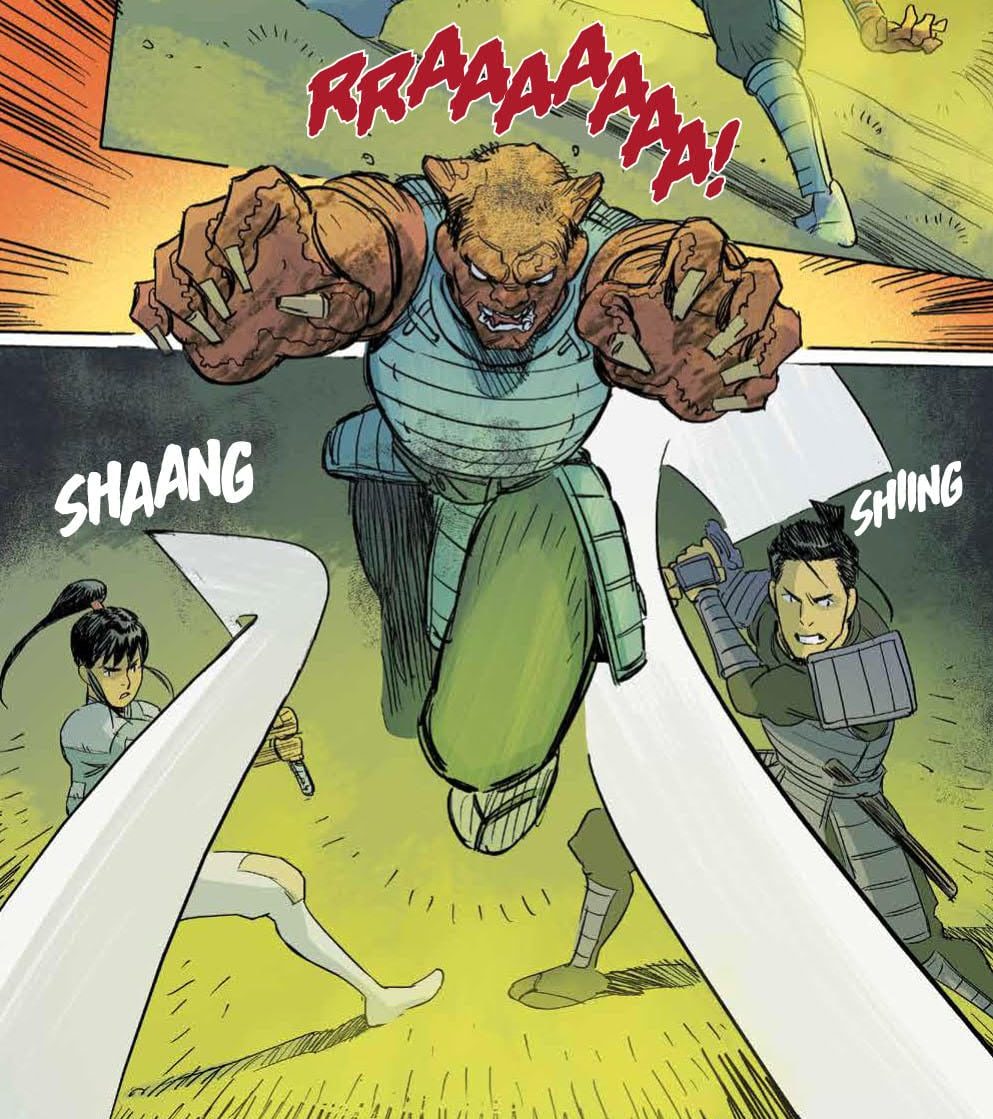 Giannis Milonogiannis’s penciling, Irma Kniivila’s coloring, and Simon Bowland’s lettering work together seamlessly in this flashback focused issue. The transitions between Hana’s memories of her early life on the Island and those of her present predicament are distinguished by a varying degrees of opacity in lines and colors. This stylistic choice applies to the lettering as well.

Milonogiannis and Msassyk’s main cover artwork depicts this issue’s star, Hana, riding on a boat toward the Island with sword in hand. We see a clear sense of determination on her face as she seeks to protect her home.

Ethan Young crafted the predorer cover as usual, this time depicting a Byonin infected bear in a traditional East Asian art style. This helps us visualize the creatures as legendary monsters.

RONIN ISLAND #9 hits readers hard and allows them to sympathize with Hana more than ever before. We’ve all been betrayed by those we once looked up to, but can we blame someone for reacting out of great fear?

Do you think Hana will survive after being shut out from the Island? Let us know in the comments below!

Writer Greg Pak weaves together a narrative that hits home with its themes of familial estrangement. Readers witness an abandonment of the community's ideals in service of fear.Review: The Island Betrays Hana In RONIN ISLAND #9