Review: The Battle For The Fate Of Earth Concludes In INCURSION #4

The villainous Imperatrix Virago has made her claim on Tama, Earth’s Geomancer and life force vessel. Shan is doing her best to hold her off, but it’s only a matter of time before the necromancer reaches the young girl. And to make matters worse, Syntilla’s virus has weakened her to the brink of death. Fortunately, the Eternal Warrior Gilad is on the search for a cure. But can he find it and reach Tama before it’s too late?

Andy Paknadel and Alex Diggle’s INCURSION #4 is the climactic story readers of this series have been waiting for. The protagonists’ desperate attempt to keep Tama alive is diametrically opposed to Virago’s desire to extract the life force from the planet. The young girl’s very life will ultimately determine the fate of Earth.

As the battle rages on, Gilad continues looking for a cure despite the horde of Virago’s army. His diligence is commendable, but it’s his motivation that inspires the reader. Through Gilad’s actions, the writers paint a beautiful picture of his true impact. We see that his role as Tama’s protector serves a greater purpose than simply keeping her alive. He wants to keep her human. 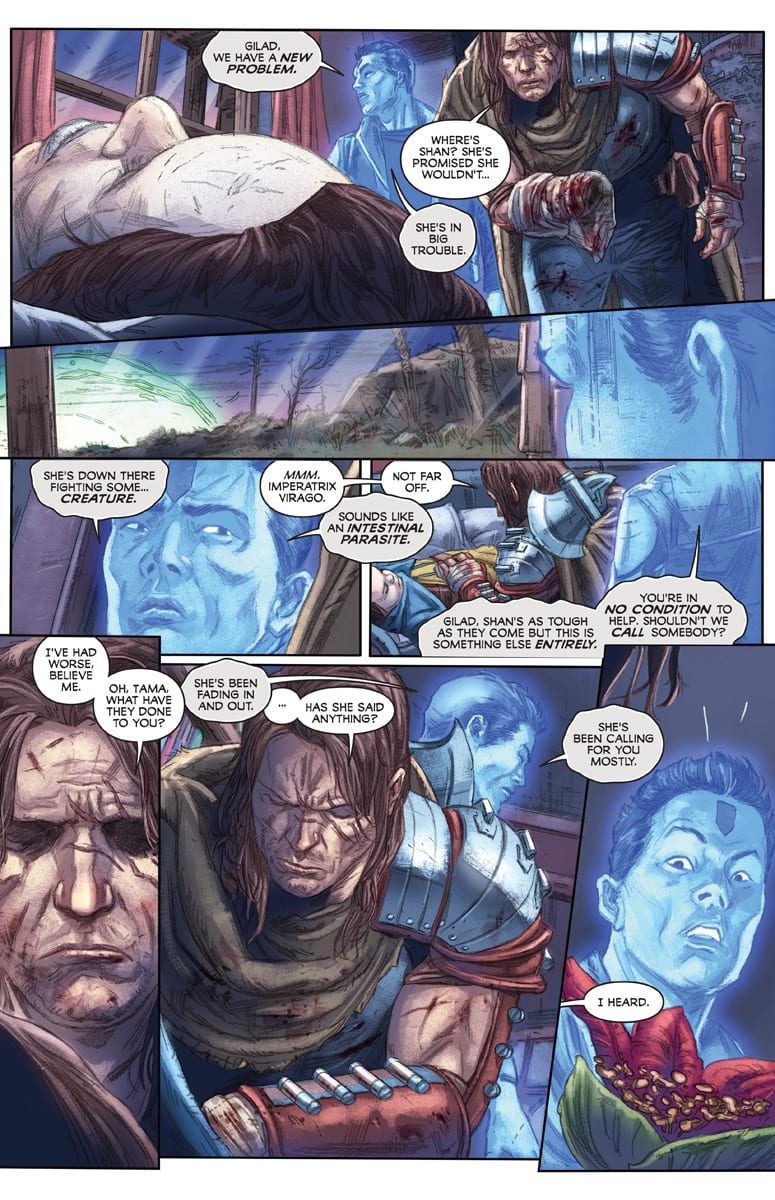 This finale crafts intriguing insights into the relationship between Gilad’s role as Tama’s protector and Tama’s role as Earth’s guardian. Readers will experience the heart-wrenching drama that comes with the delicate balance of life and death these heroes attempt to protect.

Doug Braithwaite’s penciling gives readers highly detailed battle-scenes throughout the issue; one can see every scratch and cut opened by the clash of swords. Similarly, Diego Rodriguez and Leonardo Paciarotti treat readers to brilliant colors in these fights, including the crimson red blood spread throughout the battlefield’s mountainous backdrop.

In addition, Marshall Dillon’s lettering gives life to each character, especially Virago. The squiggled lines around her dialogue lets the reader imagine her cryptic manner of speaking.

INCURSION #4 wraps up the wild journey Valiant began back in issue #1. Fans of Gilad the Eternal warrior and Tama will be rewarded for following along with this cosmic, earth-shaking adventure.

Review: The Battle For The Fate Of Earth Concludes In INCURSION #4A thrilling finale to one of the most original stories featuring the Eternal Warrior. It makes readers hunger for more stories in this vein.