Review: THE BATMAN WHO LAUGHS: THE GRIM KNIGHT #1 Shows Us Batman with Guns

We were introduced to the murderous Batman Who Laughs in DC’s DARK NIGHTS: METAL event when he attempted to wreck the Multiverse. This alternate version of Bruce Wayne was thought to have perished in the event’s climatic finale, but it appears he found his way into the world of Earth-One. Now he’s recruited the Grim Knight, another alternate version of Batman who is willing to kill. 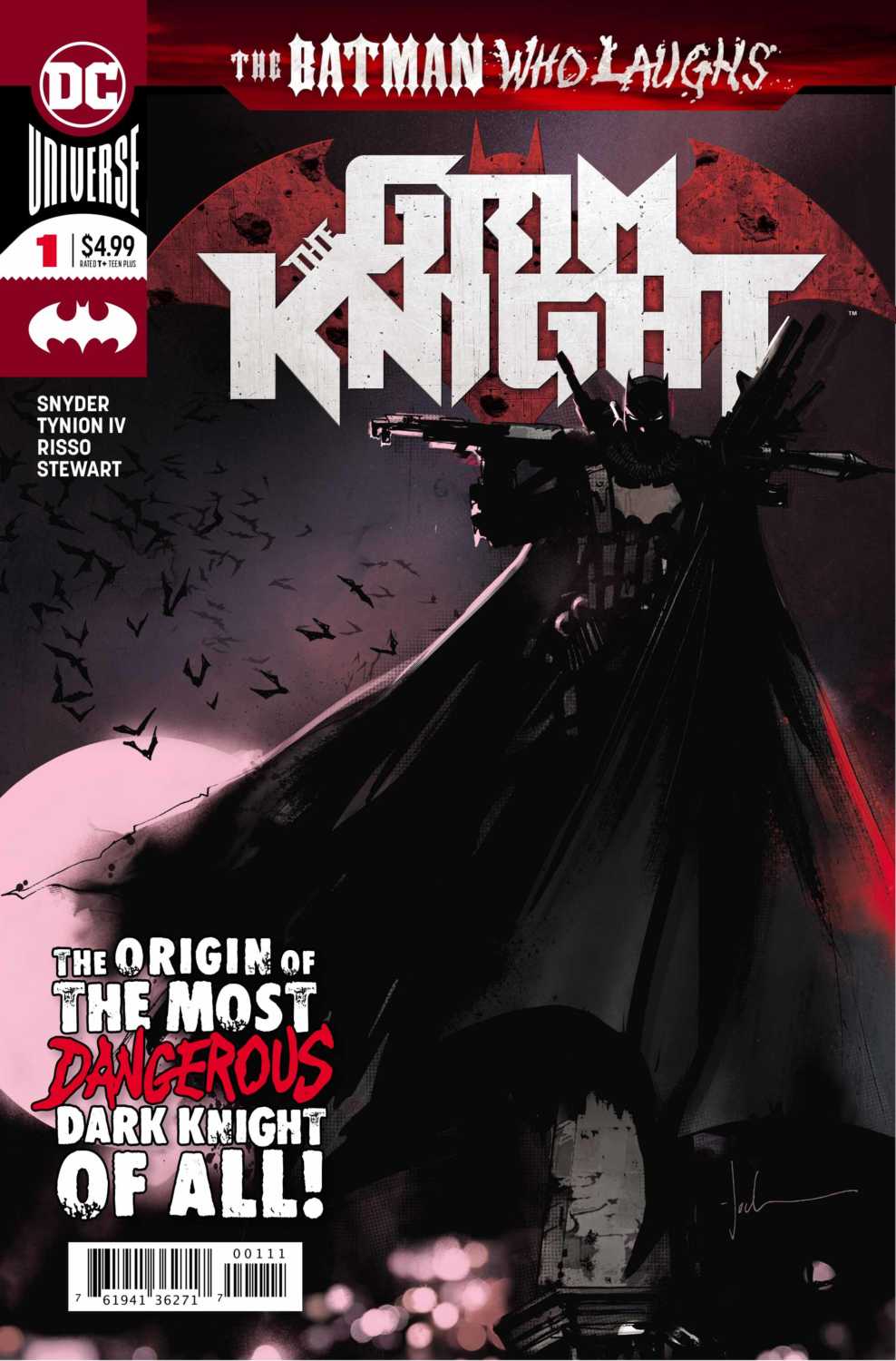 This issue sets up a thrilling backstory to the Batman of another Earth, told through a conversation with his reluctant captive. This prisoner claims to be Batman’s friend, but the Grim Knight, as he is dubbed by the narrator, continues to push him along. As they navigate the Gotham streets we learn this version of Bruce Wayne made some startling life choices in contrast to his Earth-One counterpart. 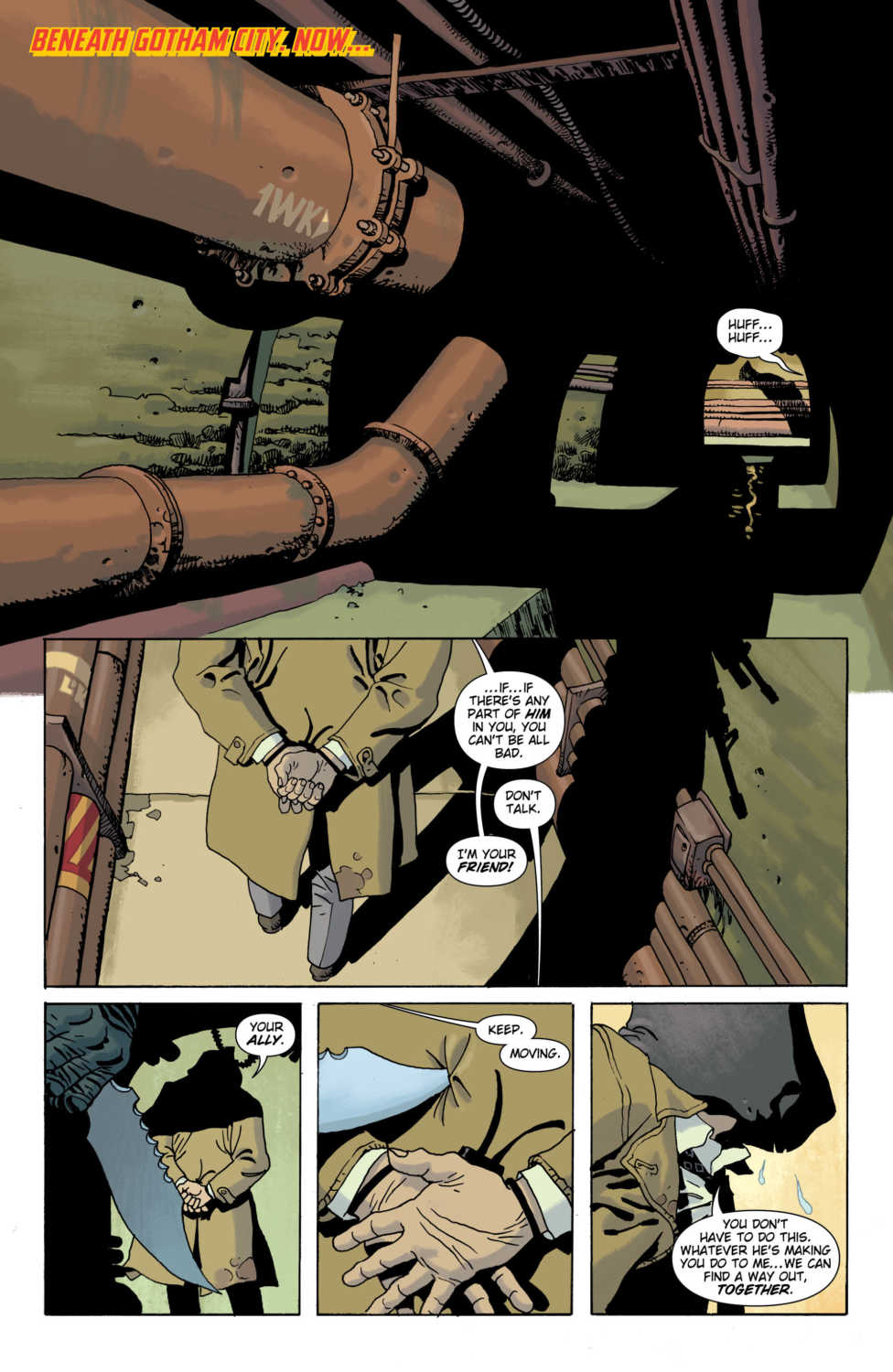 Readers learn the Grim Knight witnessed his parents’ murder in an alley much like Earth-One Batman. But instead of focusing that rage inward, this vigilante-to-be grabs the shooter’s gun and fires back. The scene leaves the reader speechless as Bruce’s sorrow slowly builds into a rage. 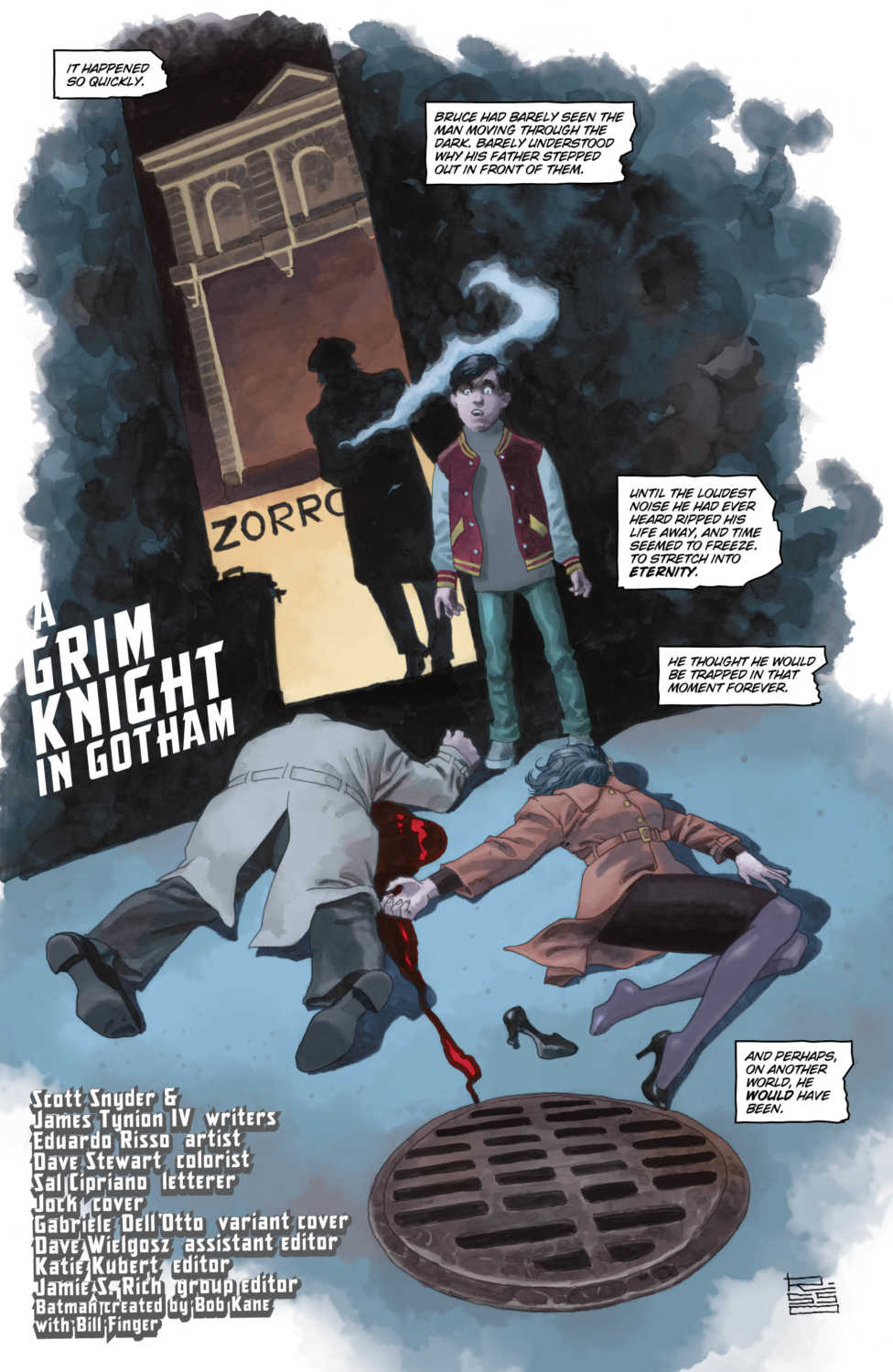 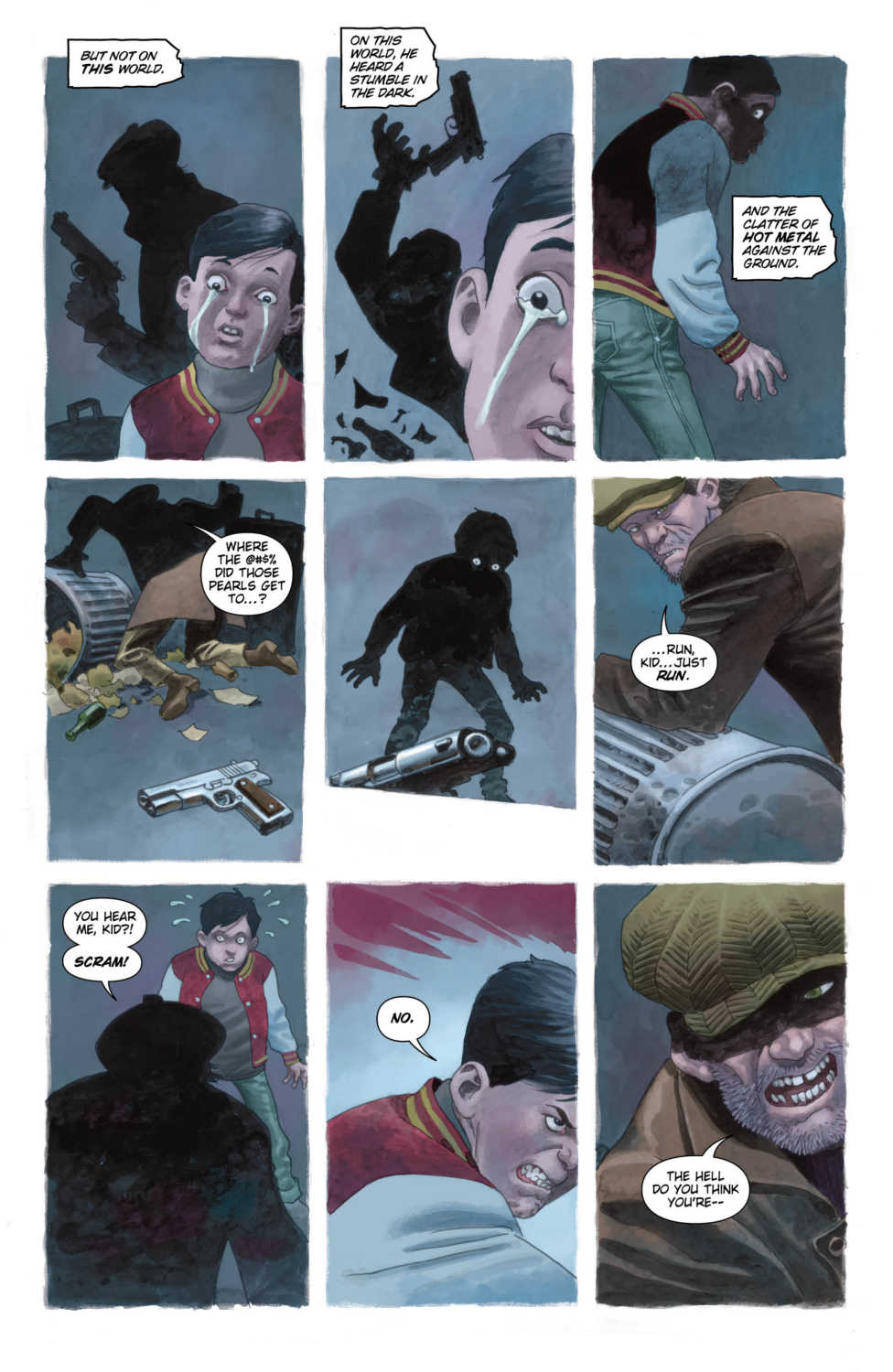 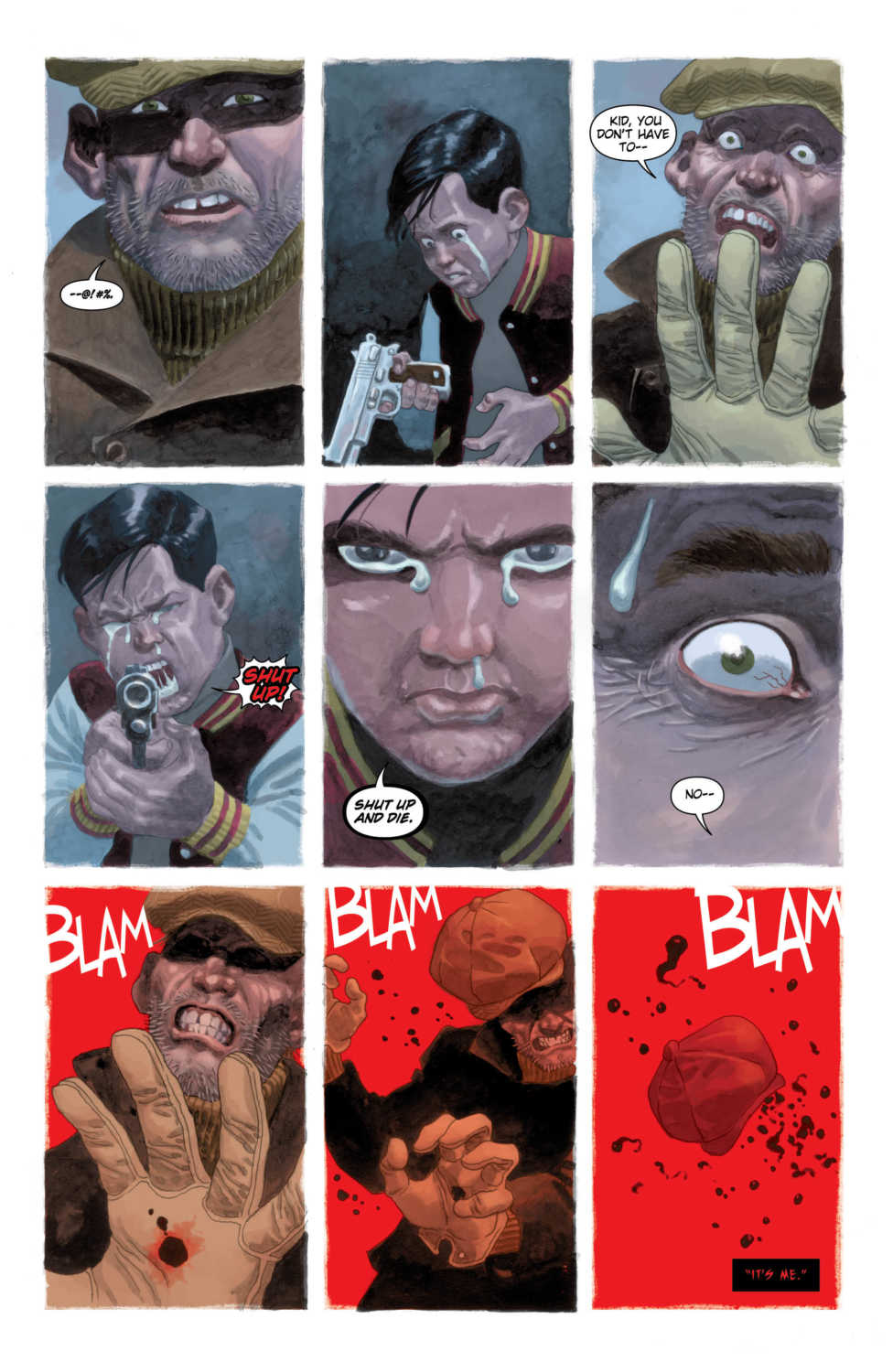 From that day forward the Grim Knight vowed to use whatever means necessary to take down criminals. This vigilante believed some criminals deserved death and added guns, knives, and other lethal weapons to his arsenal.

The Grim Knight is willing to cross the line Batman refuses to go near. And it is this characteristic that makes the Knight a perfect recruit for The Batman Who Laughs.

Scott Snyder and James Tynion IV’s story poses important questions to every fan of Batman: What would happen if Bruce killed criminals? Would we still respect him if he used guns? Readers will ponder these questions as they come to terms with a Batman who takes life and death into his own hands.

The issue’s main and variant covers captured the best aspects of this intriguing new version of the Dark Knight. Jock’s cover casts the Grim Knight in dark shadows to point out the mysterious nature of its main character.

At the same time, Gabrielle Dell Otto’s variant edition unveils this mystery by featuring an assortment of deadly weapons strapped to the Knight’s back, which emphasizes the stark contrast between him and the classic Earth-One Batman.

Eduardo Risso, Dave Stewart, and Sal Cipriano provide outstanding illustrations for the inner story. Risso’s pencils and Stewart’s colors compliment each other beautifully, highlighting the true horror of the Grim Knight’s backstory by using dark shading and realism in their illustrating. It’s also great to see the transition in artistic style between Bruce’s past and present, using hazier inks to give the appearance of his foggy memories and sharper images for the present events.

In addition, Cipriano adds great inflection to the lettering that emphasize key players in the story. Readers can rest assured the most important elements stand out in the dialogue.

THE BATMAN WHO LAUGHS: THE GRIM KNIGHT #1 introduces the Knight in near-perfect narrative fashion. It’s as if readers are invited to join the young Bruce in his horrific and violent journey toward becoming the Batman who kills. We’ll have to wait and see what plans the Batman Who Laughs has for this version of the Dark Knight.

What do you like or dislike about the Grim Knight? Let us know in the comments below!

Review: THE BATMAN WHO LAUGHS: THE GRIM KNIGHT #1 Shows Us Batman with GunsAn incredible story presented in the form of a thought experiment. Batman fans will see what the vigilante would be like if he killed his enemies.