Graduation day is huge. It feels like the end of everything. But it’s tempting to downplay the whole event. Hell, it’s just high school, right? But writer Patton Oswalt, artist Dean Kotz, colorist Jason Wordie, and letterer Nate Piekos have empathy for teenagers leaving the world they know. Black Hammer: Visions #1 follows two teenage girls on their graduation day. They talk about their lives in Rockwood and the people who have left a mark on them. Dark Horse’s new series, Black Hammer: Visions, is a collection of one-shots, featuring some of our favorite Black Hammer characters. This first issue is a charming starting place.

Oswalt immediately has us liking high schoolers Barbara and Eunice. They’re a couple of misfits, but they’re proud of that. They talk about high school, a world they’re leaving behind, with a subtle mix of wisdom and denial. Eunice knows it’s not the end of the world, that they’re just graduating, but Barbara knows it’s the end of something. Yet neither of them spend much time talking about leaving high school. Oswalt makes it seem like that might be because they’ll secretly miss it. Instead, Eunice reminds Barbara of that one girl they knew back in elementary: Gail. Eunice’s stories about Gail don’t have big, dramatic moments. They’re stories about her swearing in class and being caught with cigarettes in the bathrooms. But it’s in all the mundane details that Oswalt sprinkles in tiny, significant moments. Gail may have actually shaped Eunice into who she is. And because Oswalt’s way of showing this is quiet and unassuming, it’s also deeply moving. 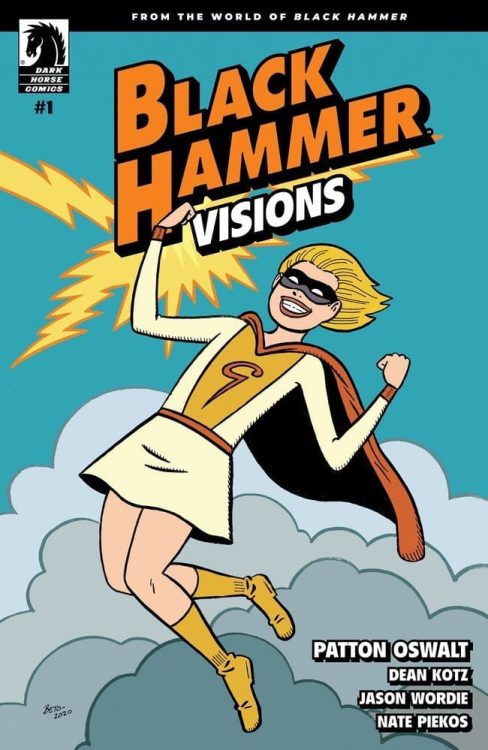 Kotz makes this issue look like a photo album or scrapbook. Panels overlap each other, looking like photos that have been glued in place. It’s a perfect look for a story about memories and graduations. But Kotz also shows us what memory felt the most intimate to Eunice. As she relays all the times she remembers seeing Gail, we see Gail as a small figure on the page. She’s another kid in the crowd. But, in one brief moment, Barbara, Eunice, and Gail are all playing out in a field together. We get a close up look of Gail’s face as she runs towards the reader. What’s odd is, she’s smiling. Then the image shifts. She’s still close, but her face has changed. She’s got her eyes clenched shut and she’s sweating. Her face is full of pain. Eunice is remembering the one time she felt close to Gail and so Kotz is depicting Gail as though she’s close to us, as readers. It’s the one time they had unadulterated fun together, but it’s also the one time Eunice got a glimpse of Gail’s inner turmoil.

Wordie shows this graduation day as a bright time for Eunice and Barbara. The sun is out, the diner looks cozy, and everything seems optimistic. And when Eunice walks us through some of her memories, the color palette gets slightly dimmer. We get the sense that these were happy times. The coloring is still bright. But these are happy times that have faded with age, a little. They’re not as clear as the present day. And finally, when Eunice and Barbara end out the issue at a party, the colors get darker. Wordie makes the moment feel a little more serious, yet still full of beauty. It’s as though Wordie is telling us that these girls are growing up. Things will be colored differently in their lives from now on. 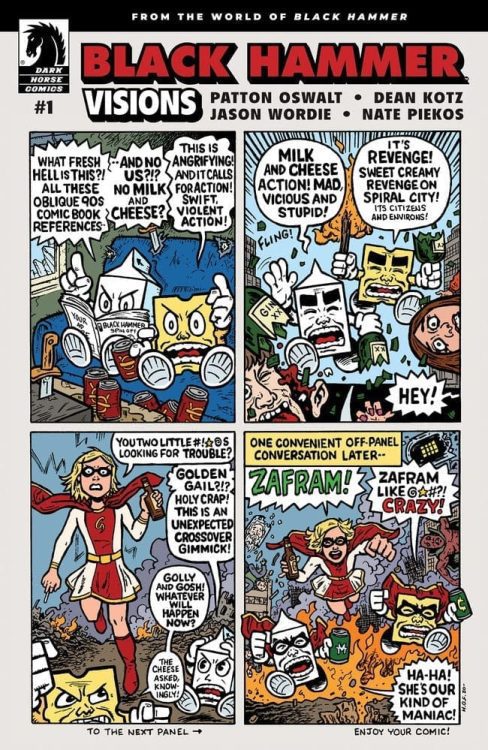 Piekos’ lettering shows the playful banter that Eunice and Barbara have mastered. Their word balloons are connected by winding tails, giving a bounce to their dialogue. But there seem to be plenty of opportunities to create more rhythm in this issue. When Eunice yells at Gail, her speech is long and complicated. But it’s presented in one single chunk. Occasionally, this seems to be deliberate. Piekos communicates a breathless excitement through some of the dialogue. There are no pauses, the characters just charge right through to the end of their line. But there are a few moments that feel rushed over. Real moments of panic and confusion aren’t given time to sink in.

Dark Horse’s Black Hammer: Visions #1 is an empathetic and warm look at high school graduations. It follows Eunice and Barbara, two girls whose lives are changing. But Oswalt, Kotz, Wordie and Piekos never talk down to these characters. Instead, they remind us what it was like for us to graduate high school. They show that it doesn’t take Armageddon for worlds to end. Sometimes it just requires moving on, as hard as it may be. Pick up Black Hammer: Visions #1, out from Dark Horse February 10th, at a comic shop near you!

Dark Horse's BLACK HAMMER: VISIONS #1 is an empathetic and warm look at high school graduations. It follows Eunice and Barbara, two girls whose lives are changing. But Oswalt, Kotz, Wordie and Piekos never talk down to these characters. Instead, they remind us what it was like for us to graduate high school. They show that it doesn't take Armageddon for worlds to end. Sometimes it just requires moving on, as hard as it may be.Review: Taking Teenage Angst Seriously in BLACK HAMMER: VISIONS #1