With Symbiote Spider-Man: Alien Reality #1, out this week from Marvel Comics, creators Peter David and Greg Land offer up an interesting hook for their next installment of black suit Spidey stories.

We first see a strange object crash to Earth. While Black Widow sets about investigating, Doctor Strange appears, suggesting this is no ordinary space rock. Meanwhile, Peter Parker dukes it out with Kraven the Hunter, only to find himself suddenly trapped in an alternate reality. In a flash, one of his oldest enemies is suddenly his partner, and he’s romantically involved with another superhero. Even the Spider-Mobile is back. Following the bizarre twist, Peter’s left to try and uncover what’s real, and who’s responsible. 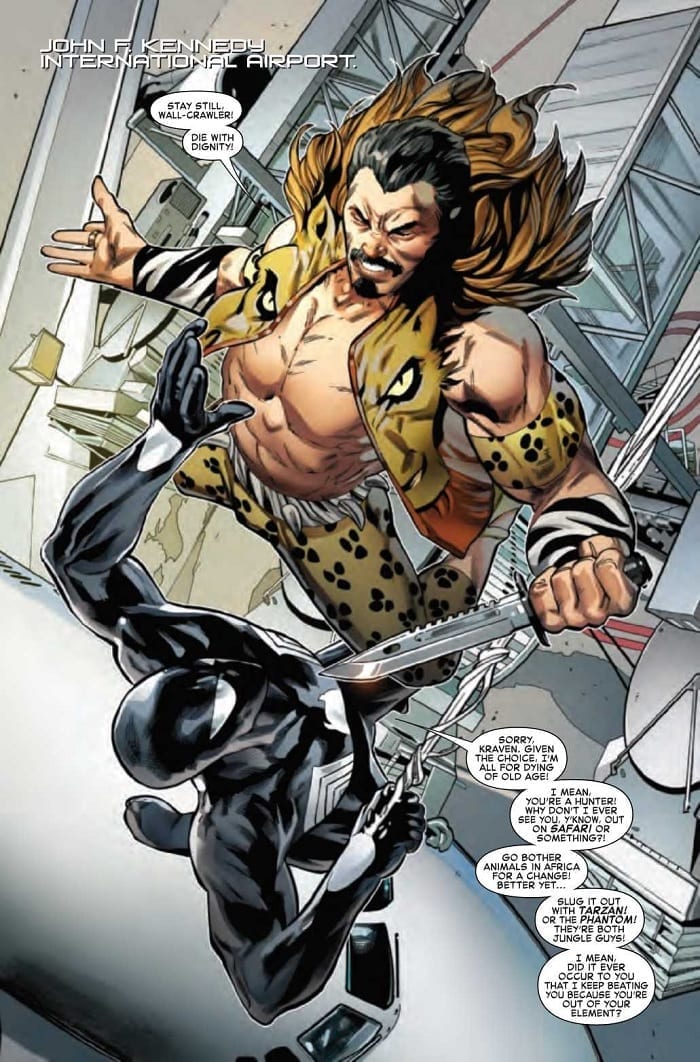 Writer Peter David lays out an intriguing lead to the story in Symbiote Spider-Man: Alien Reality #1. The Word of God—a book of powerful spells capable of manipulating reality—is in play. The book, of course, falls into the hands of one of Spidey’s classic villains, who uses it to alter Spider-Man’s life. Thus, what starts out as a rather mundane story quickly takes on an interesting, even comedic twist.

David does a good of pacing the story. He allows the weirdness to trickle out, bit by bit, as Parker realizes something is not right. The twists keep coming right up until the last page, ending with a cliffhanger that is sure to keep readers coming back. It’s also nice to see Hobgoblin get some attention, as he’s been a somewhat underutilized antagonist in the last few years.

Much of the book, especially in its second half, is one continuous sequence. If not handled properly, this could result in a poor balance of action and narrative. Fortunately, David finds a sweet spot to balance these elements in Symbiote Spider-Man: Alien Reality #1.

Although not packed with much thematic depth, the book offers a compelling and fun alternate reality story. While science may be Peter’s strong suit, throwing magic into the mix brings a kind of chaotic energy. With magic involved, just about anything could happen, allowing Hobgoblin to bend reality at will. The result is a book that packs surprises, without feeling too detached from its own internal logic. 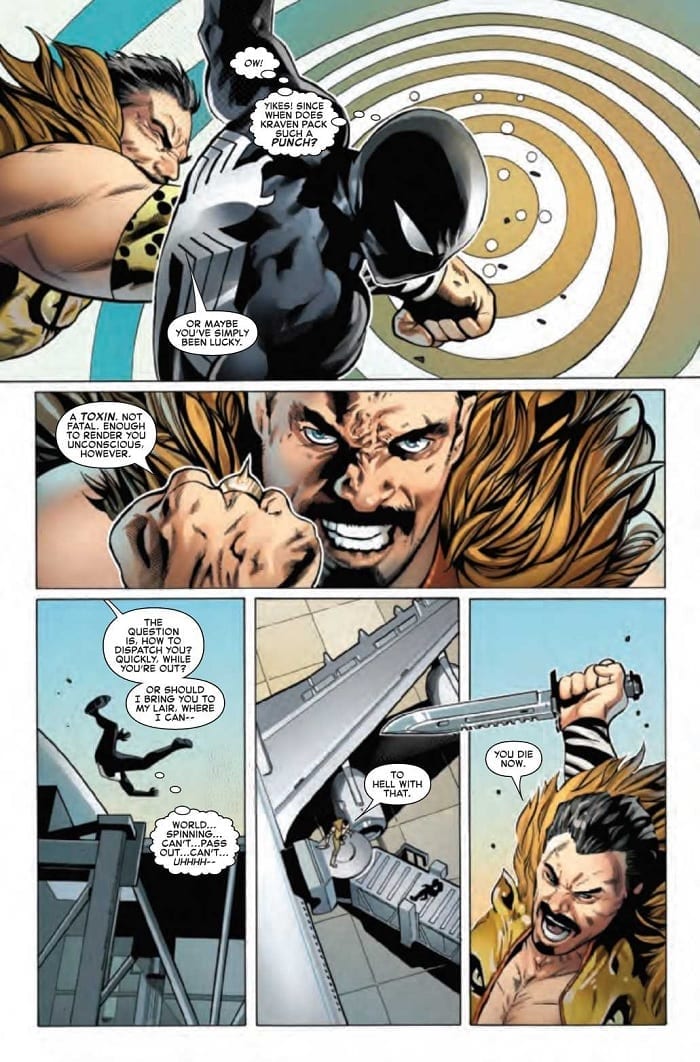 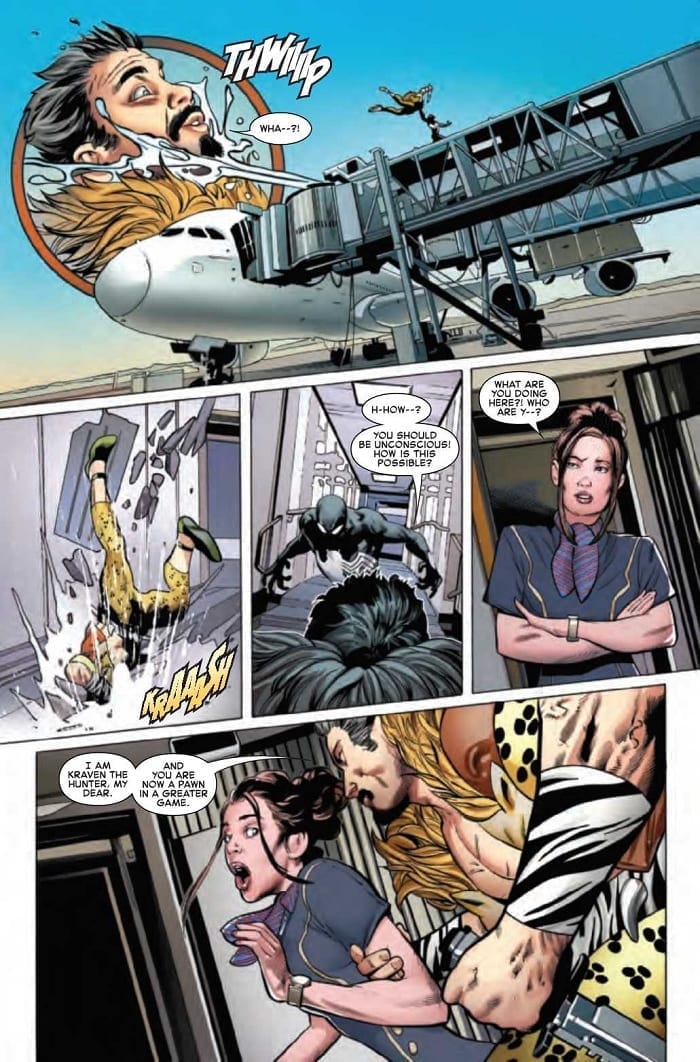 Greg Land’s character designs in Symbiote Spider-Man: Alien Reality #1 are impressive and eye-catching. Where the work really shines, though, is in the characters’ expressive features. A raised eyebrow or a look of bewilderment on a character’s face really brings the writing to life and helps to draw the reader into the world of the book.

Speaking of drawing in the reader, there is an impressive level of attention paid to detailing the backgrounds throughout. The illustrations are vibrant and dynamic, with some truly excellent images sprinkled throughout.

On the whole, the layout and structuring of the page in Symbiote Spider-Man: Alien Reality #1 isn’t the most inventive use of the format. However, the artist compliments David’s writing well, hitting the story beats and effectively and clearly conveying the action on the page. 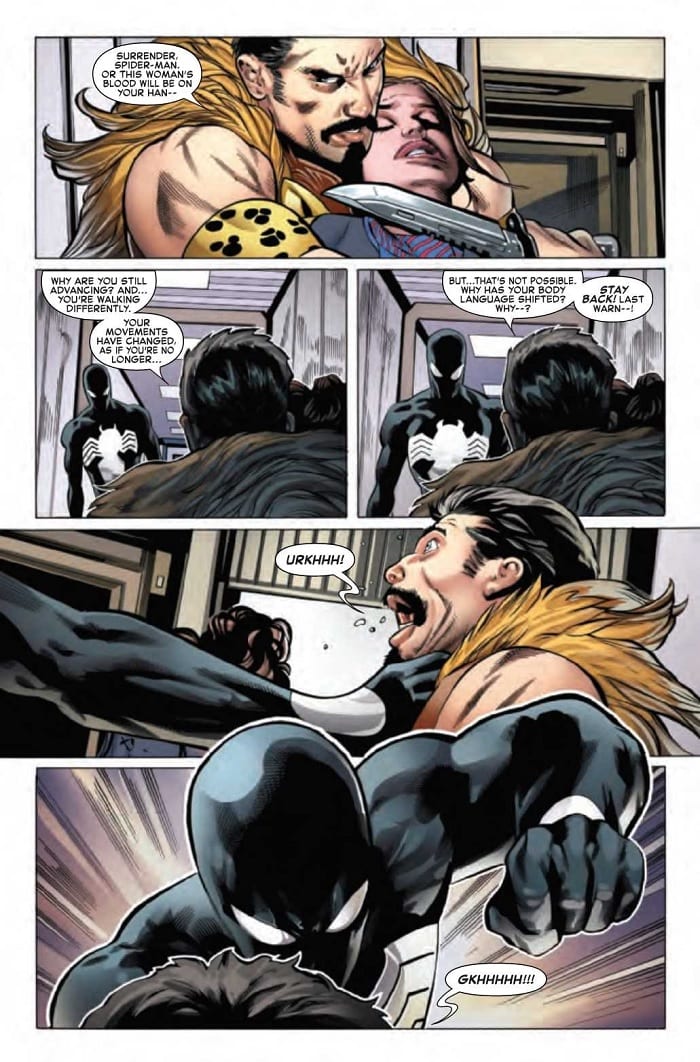 Symbiote Spider-Man: Alien Reality #1 is a great start for this new story. Strong artwork and interesting story combine to bring a creative black suit story to life. Definitely worth checking out.