Review: SUPERMAN: UP IN THE SKY #1 Has a New Take on the Man of Steel

Superman: Up in the Sky #1 is the first part of a six issue miniseries, which was originally printed in the Superman Giant series hidden somewhere in your local Walmart. 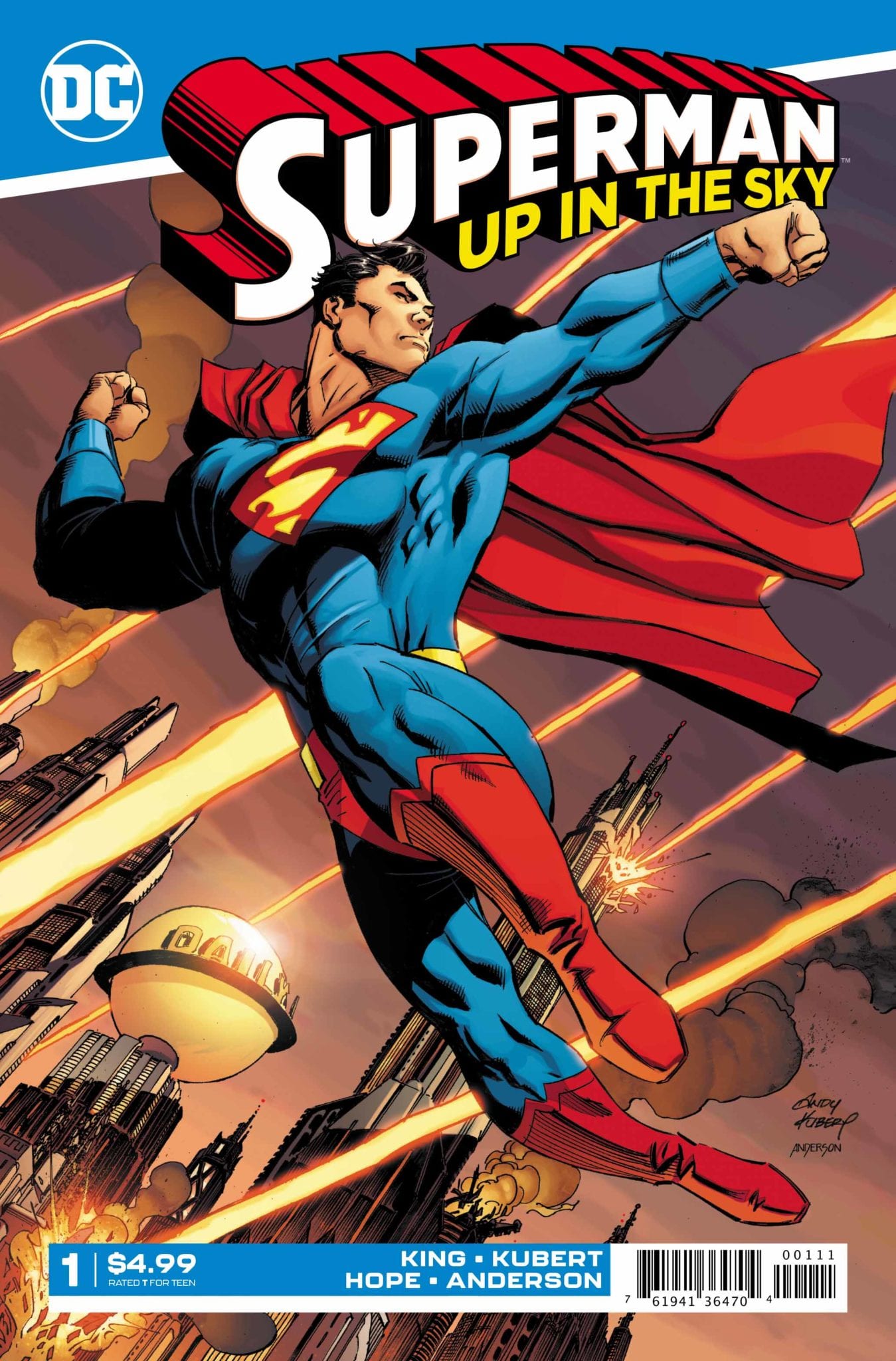 Aliens have kidnapped a young Earth girl from Metropolis, taking her off-planet. Superman goes in pursuit of them, but with each stop along the path, the mystery of who the aliens are deepens, and the Man of Steel is faced with a new task. Is he getting closer to rescuing the girl, or further away? And who is protecting Metropolis in his absence? This galaxy-spanning question poses a moral dilemma for Superman: How much is one life worth compared to the millions back on his adopted planet? How far will he go, what foes will he face, to find that answer?

In Superman: Up in the Sky #1, Tom King has gone for a ‘back to basics’ formula to telling this Man of Steel story. Readers are given a strong emphasis and why Superman is the hero we know and love. His supporting players, including Perry White, Pa Kent, and Lois Lane are also put in the spotlight to give a clear idea as to who these characters are, for any new readers.

King is known for his emotionally complex take on established characters. Sometimes they are revered (see: Vision), while others are met with division (see: Heroes in Crisis). Here we see an obsessive Superman, one who must be able to save anyone and everyone. He refuses to accept that he cannot help people individually, whilst also being the savior the entire planet needs him to be. It’s very reminiscent of Batman, who will stop at nothing until the mystery is solved. King leans heavily into the investigative journalist that Supes is supposed to be, but rarely seen. 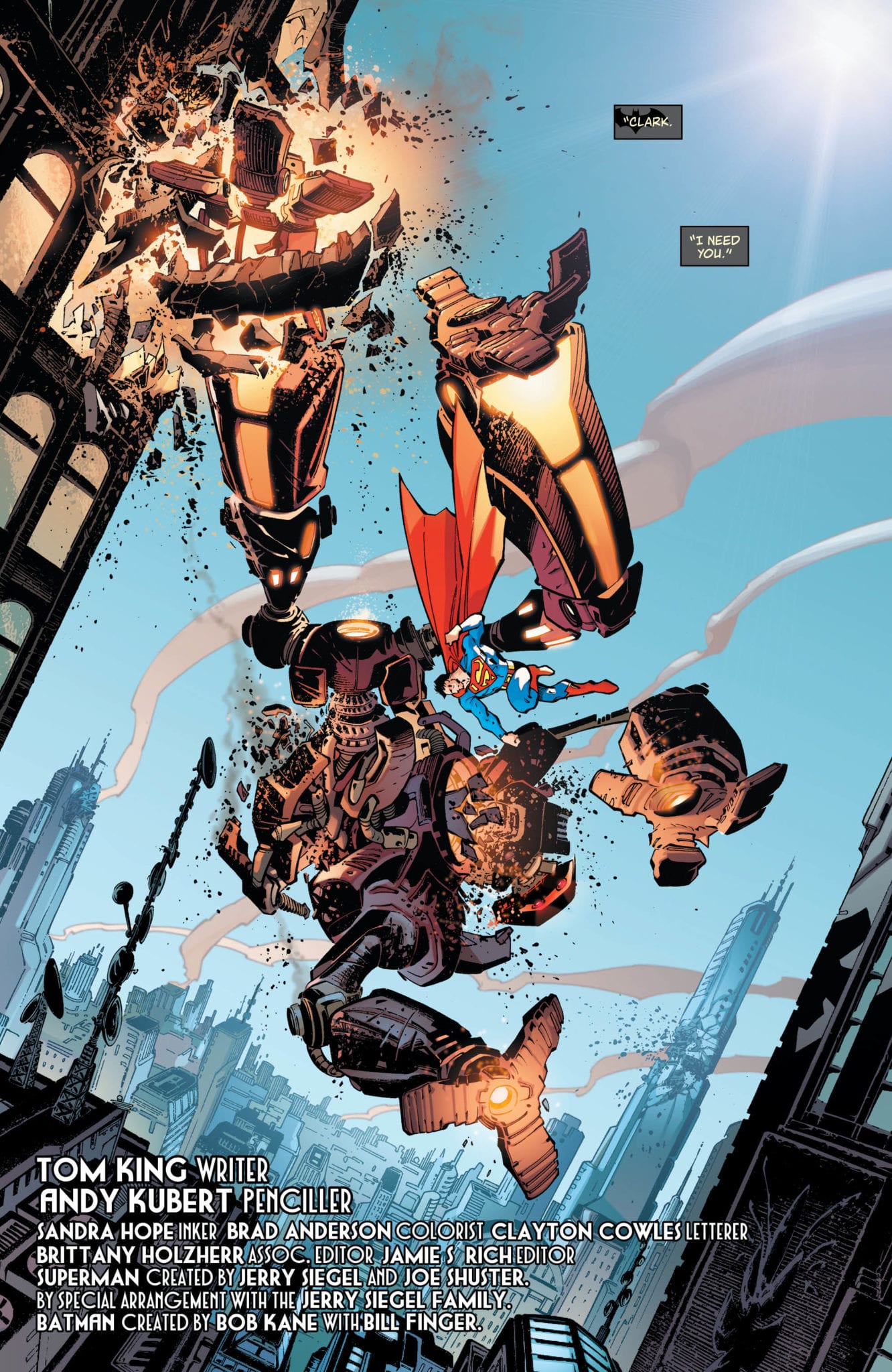 Penciller Andy Kubert brings his visceral and bold style to Superman: Up in the Sky. Much like his work in The Dark Knight III: The Master Race, there are some images of Superman in this book covered in shadow, and with heavy, vivid creasing. When he draws closeups of his characters, Kubert is a master of facial expressions, particularly that of rage. There is also some beautiful imagery of Superman saving the day time and time again. That’s not to say the artwork is flawless. Some character proportions and facial expressions are a bit uneven.

Tom King and Andy Kubert present a great jumping on point for new readers, as well as an interesting angle on Superman’s unquenchable need to save the day for established fans.

What did you think of Superman: Up in the Sky #1? Let us know in the comments!

Tom King and Andy Kubert present a great jumping on point for new readers, as well as an interesting angle on Superman’s unquenchable need to save the day for established fans. Michael FrommReview: SUPERMAN: UP IN THE SKY #1 Has a New Take on the Man of Steel