There’s something about the 60’s that feels perpetually relevant. The Civil Rights Movement, the Cold War, the brink of annihilation. None of it has really gone anywhere. We’ve just given these things new names. Writer Mark Russell, artist Michael “Spike” Allred, colorist Laura Allred, and letterer Dave Sharpe are firmly aware of the undying nature of the Silver Age. Together, they tease out the many echoes of the past we hear reverberating around us. Superman: Space Age #1 is for this age. 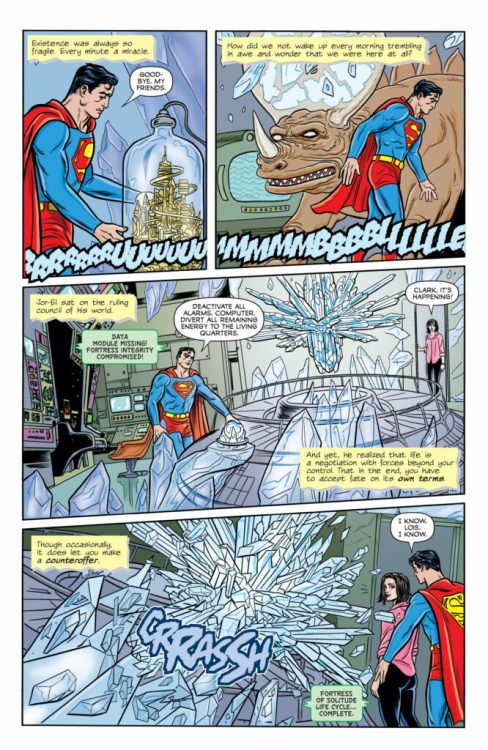 Russell’s script is as moving as it is funny. He vacillates from writing about death and war to writing about psychic poodles, all without skipping a beat. Superman: Space Age begins in a crumbling Fortress of Solitude. Kal-El’s captions calmly discuss the meaning of existence as his world falls to pieces around him. It’s a perfect way to set the mood and Russell’s writing stays in that place. As the Cold War seems to be getting out of control, characters discuss their chances of survival stoically. Global meltdown is simply one thing that might be in the cards for their futures. The whole script also fantastically plays with dramatic irony. We know characters like Bruce Wayne, Hal Jordan, and Lois Lane. We see their futures unfolding in familiar ways with fresh twists.

Some writers couldn’t get away with a script like this. There’s plenty of philosophizing, many punchy aphorisms, and lots of social commentary. It would all feel heavy-handed if it weren’t Russell penning these words. He finds ways to seamlessly meld discussions of hope, war, and wealth disparity into the story. He writes in parables and punchlines – all of which are full of meaning and depth. Superman: Space Age is as human as it is entertaining.

Michael Allred honors the Silver Age of comics while staying completely modern in his visual language too. Circular panels show up on pages, playfully framing characters’ faces. Gutters tilt and swerve, giving each page its own unique personality. No page quite looks the same. At one point, Clark Kent and another character sit in the dark foreground of the page. We just see them from their shoulders up. They’re looking over at the panel behind them – a flashback that they’re discussing – like audience members in a play. Allred’s thick linework and characters are instantly recognizable, but his dynamism and variety are also on full display in Superman: Spage Age. He steps out of his style often to underline scenes of destruction or intimacy. He will zoom us in on a character’s face, showing us the thin wrinkles along their face, or draw explosions in scratchy lines that underscore the chaos of the moment.

Laura Allred’s colors look simply realistic at first glance. There doesn’t seem to be much of an emphasis on symbolism. But when you take a closer look, her colors have lots of meaning behind them. For one thing, the comic begins in a very blue place. Most of each page is shown in some shade of blue. It matches with Clark Kent’s blue-collar upbringing. It’s the color of his dad’s jeans, the color of the suit he wears to work at the Daily Planet, the color of the Fortress of Solitude. In this way, we get the feeling that Superman is a man who’s only half formed. Then, red begins to creep its way into the color palette slowly, until it frames a dramatic splash page that pushes Clark into becoming a full-blown hero. Allred’s work is subtle, but when you begin picking it apart it’s absolutely mesmerizing.

Sharpe’s lettering is chock full of sound effects that you can just hear. The rumbling sound of a building is shown in big red letters that seem to crack at the edges, like the walls of the shaking room. The O’s in the “KAFOOOOOOOM” sound of an explosion grow as the word goes on, before shrinking again. You can hear the noise grow and then dissipate as you read it. Sharpe’s captions are just as brilliant as his sound effects. Clark’s look like they’ve been ripped out of a notebook and have a handwritten font to them. Bruce’s are in neat black boxes with white lettering. In these small choices we learn everything we need to about these characters. Clark is human, farm-grown, and humble. Bruce is driven, controlling, and brooding. Sharpe makes his most minute choices work brilliantly towards telling the story at large. 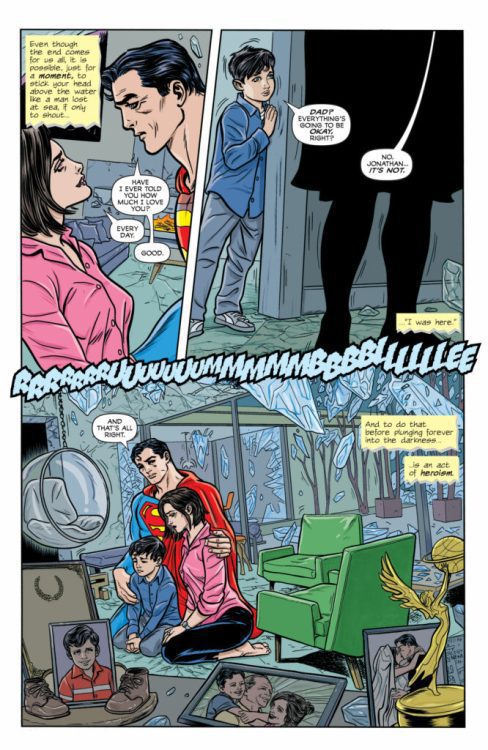 Superman: Space Age isn’t about the 60’s. Well, it is. But it’s also about our uncertain times. It’s about our fears of impending annihilation. It’s about wealth, human rights, and hope. In all of these things, it’s a beautiful meditation on our visions of an unsettling future. Pick up Superman: Space Age #1 from DC Comics at a comic shop near you on July 26th. You don’t want to miss it!

Superman: Space Age isn't about the 60's. Well, it is. But it's also about our uncertain times. It's about our fears of impending annihilation. It's about wealth, human rights, and hope. In all of these things, it's a beautiful meditation on our visions of an unsettling future.Review: SUPERMAN: SPACE AGE #1 - I Just Know the Future