Review: SUPERMAN #10 And Being Present For Family

Jon Kent has been busy explaining his recent troubling family issues to his parents. Traveling through space with grandfather Jor-El, who’s been undergoing a slight mental breakdown, wasn’t all it was cracked up to be. What’s worse, an unexpected appearance of a wormhole transported Jon into another dimension and held him there for years. And he’s ready to tell his parents the truth of what happened there. 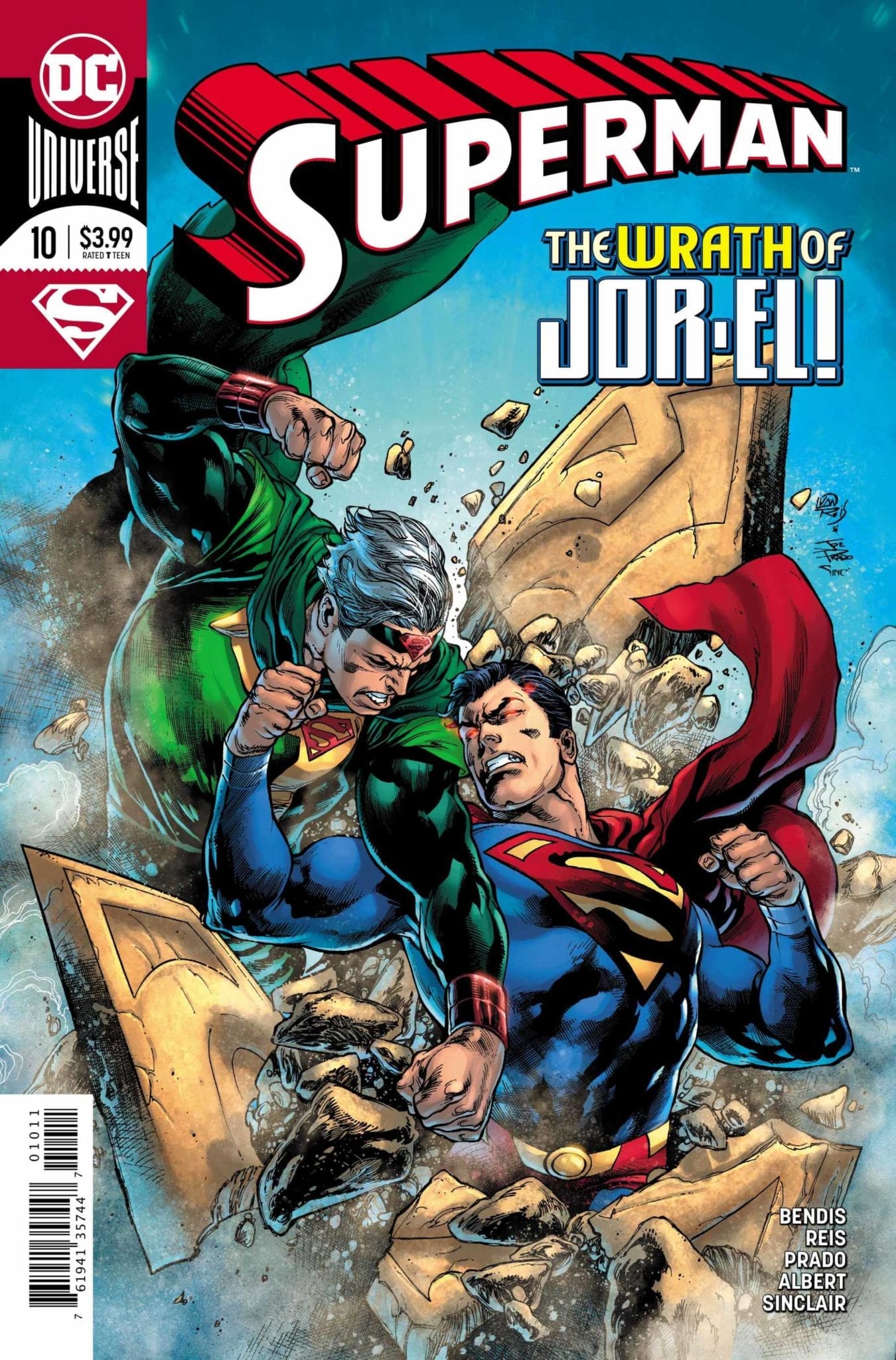 Jon’s recollection of his adventures is a particularly effective storytelling technique on Brian Michael Bendis’ part. It slowly reveals more and more pertinent details to explain the hero’s surprising predicament. This way readers are able to step into Clark and Lois Kent’s shoes as they nervously anticipate each shocking new story detail.

While traveling through space with his mentally unstable grandfather Jor-El, Jon describes being transported to an alternate dimension full of evil versions of his family. He narrowly escapes their clutches after years of imprisonment. 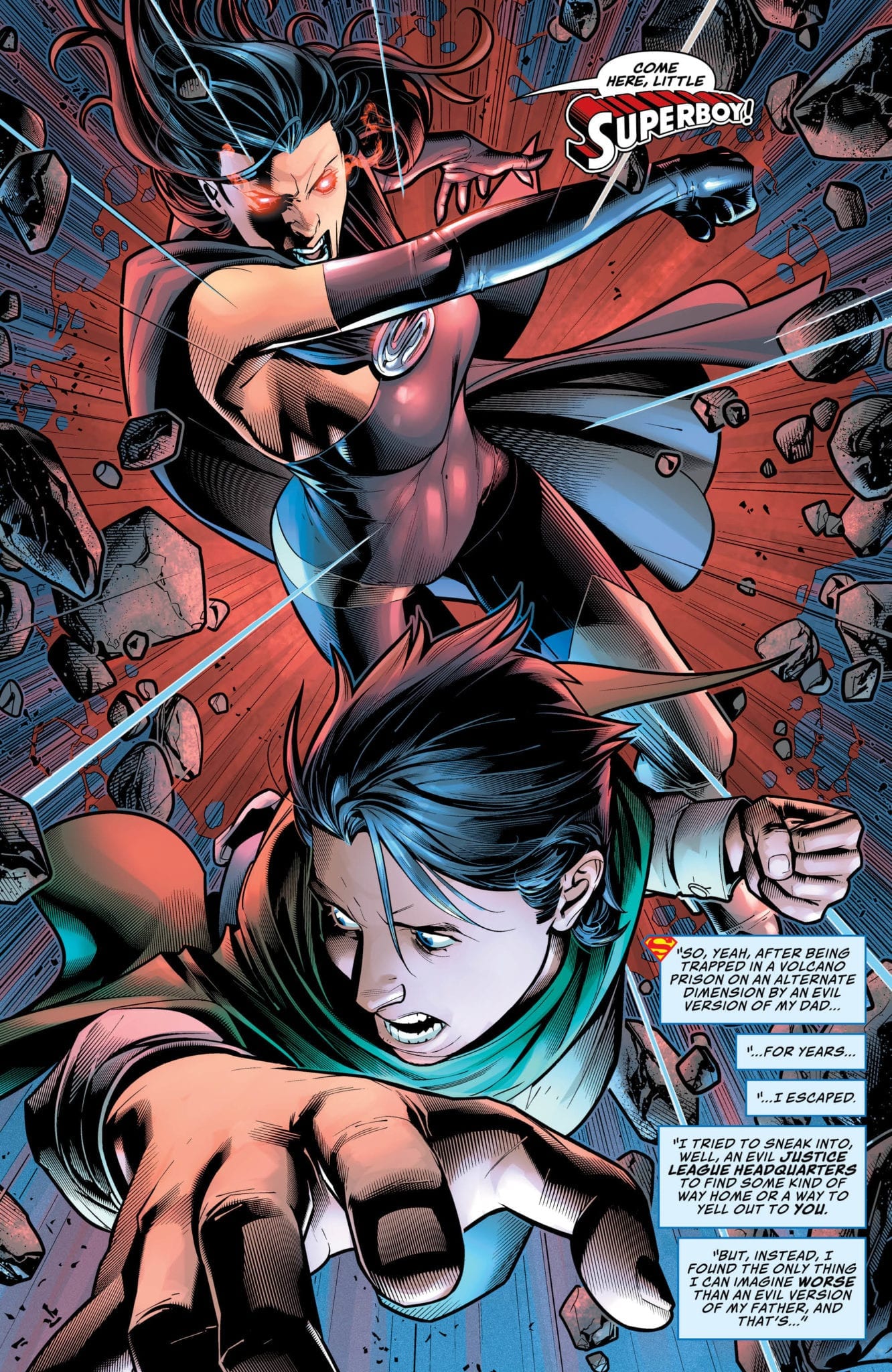 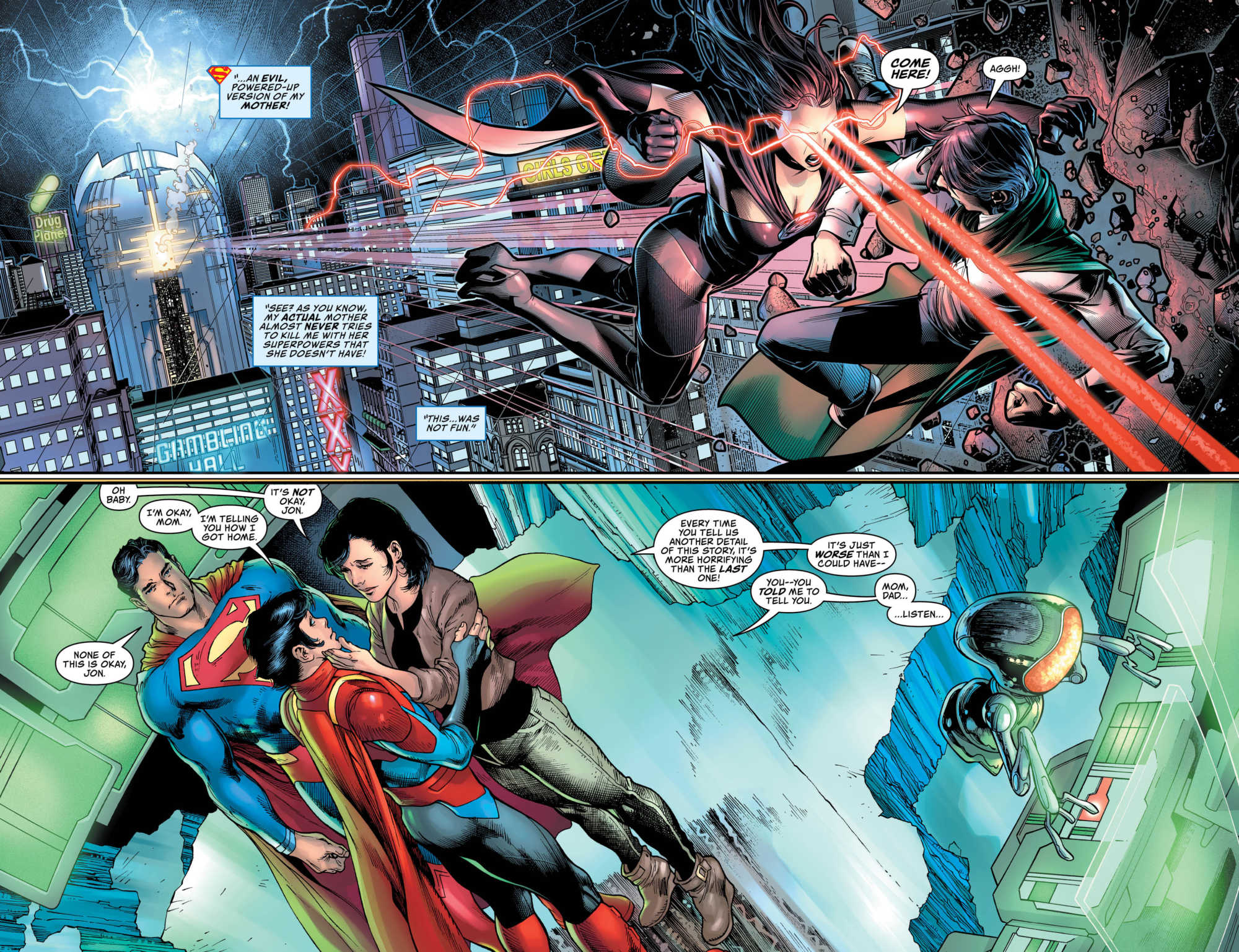 The interaction between Jon and his parents unleashes a whole host of emotions. One can sympathize with the parents’ sense of loss time. Missing out on so many years in their child’s life would be an unbearable experience. It’s enough to make a parent feel like a failure.

According to Jon, Jor-El arrived on the scene just in time. His time spent searching the multiverse for Jon paid off, but a sense of loss nonetheless accompanies the rescue. Jor-El, like Lois and Clark, must come to terms with the lack of presence in his grandson’s life. What’s more, an army of invaders from the alternate dimension has set its sights on the House of El. We’ll have to wait and see if the family can come together and resist falling apart under the weight of these problems. 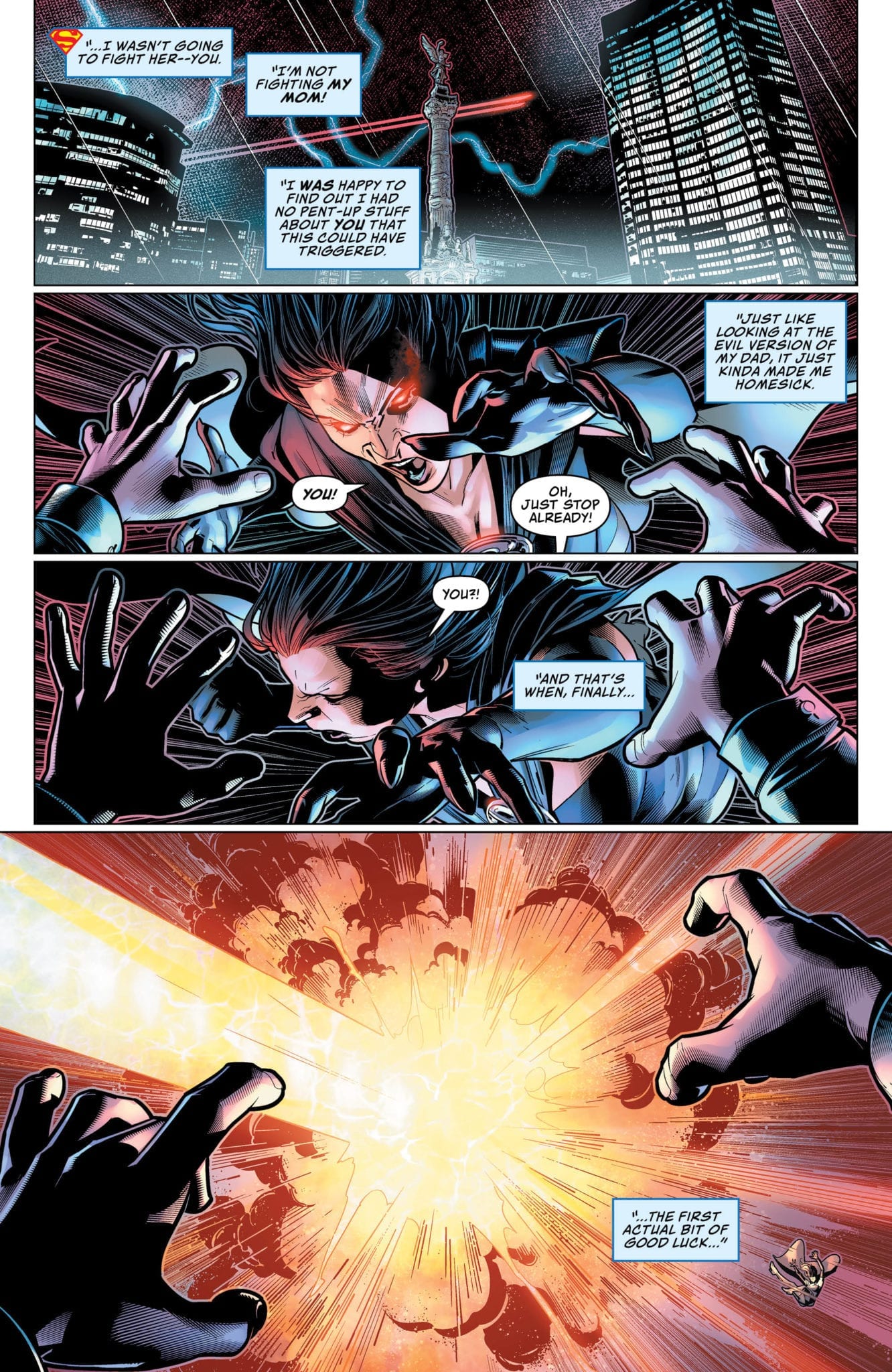 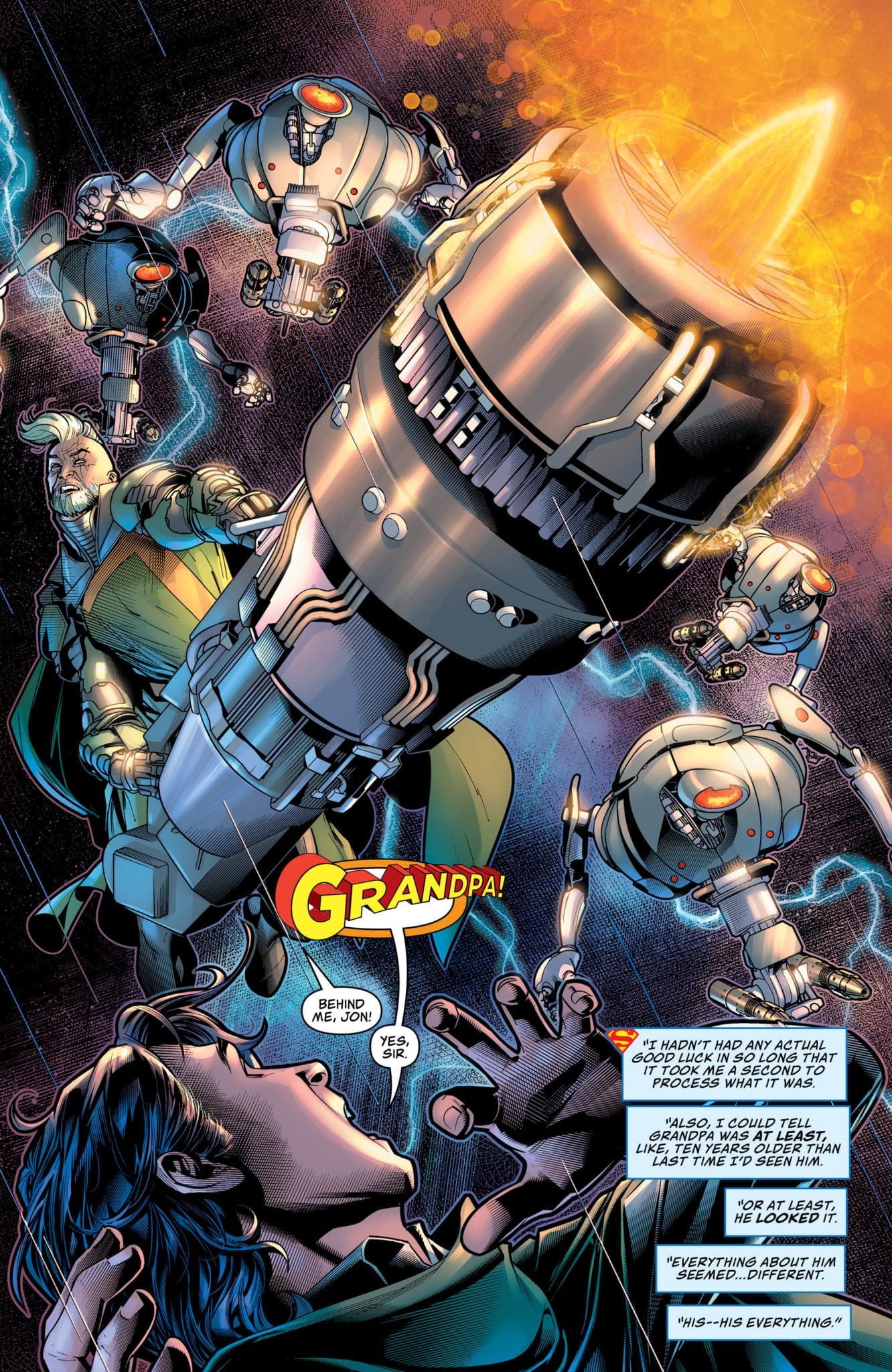 The artwork in this series installment is remarkable as always. Brandon Peterson and Ivan Reis provide action-packed fight scenes that the extent of Superboy’s powers, especially in his battle with the evil Lois. At the same time, Alex Sinclair uses a wide variety of colors to fully immerse the reader in the outer space setting.

The issue’s inking was performed by Oclair Albert and Joe Prado. Each artist finds a way to alternate between thick and thin lines to offer multifaceted and realistic illustrations.

Josh Reed’s lettering worked well with all of this artwork. His dialogue boxes do a great job of outlining the characters.

The issue’s main cover was created by Prado, Reis, and Sinclair, which depicts a fantastically illustrated fight between Kal-El and Jor-El that blends well with the interior artwork. Adam Hughes’ variant edition takes a different approach, using pastels to depict a version of Superman lost in thought while saving train passengers. This highlights his distress upon hearing of Jon’s troubles in space.

This was the issue readers have been waiting for, revealing the final stretches of Jon’s journey with Jor-El. It’ll be interesting to see how Clark, Lois, and Jor-El respond to their much-older son and confront the imminent threats posed by those who followed him back to Earth.

What did you think of Jon’s final details to his crazy adventure? Let us know in the comments below!

Review: SUPERMAN #10 And Being Present For FamilyA thrilling conclusion to Jon's tale of his adventure in space. We find a strength in the House of El and its family bond.