Review: STEALTH #4 Is The Action Movie Rental You’ve Been Waiting For

STEALTH #4, available from Image Comics on August 12th, follows all the players – Tony, Stealth, and Dead Hand – as they converge towards the final showdown. Mike Costa’s story leans heavily into the action movies of the ’80s and ’90s to bring you a chapter that’s violent, tense, and surprisingly humorous.

Jason Howard’s cover is a beautiful blend of action in pulp. The henchman is getting ready to blast away when you see the reflection of Stealth bearing down via a pool of blood. The cover plays up and on the violence of the issue well, but the angle of the reflection is off, so it was a little distracting.

Costa’s story picks up right after the events of issue #3 (you can read our review here). Tony is searching for Stealth. Stealth is cornered in an old safe house. And Dead Hand is killing anyone who gets in his way.

Costa does a great job weaving the three-character threads towards convergence. Tony uncovers the clues to Stealth’s plan if you can call it that. Stealth is racing to uncover the tools he needs to defeat Dead Hand before he loses his memories. Dead Hand throws grenades and kills rival gang leaders to consolidate power and bring down Stealth in a very public way.

Different from the previous issue, this entry had a few dark humor jokes that caught me off guard. The jokes made the issue more fun to read, and it gave off a distinctly RoboCop (1987) vibe in their absurdity. Excellent work overall by Costa. 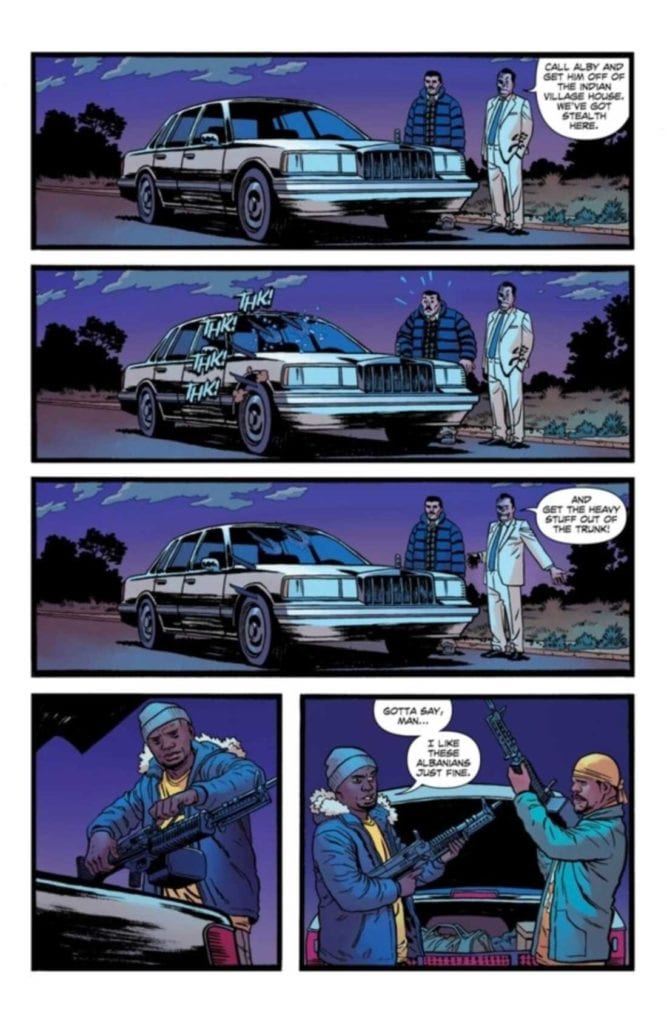 Nate Bellegarde lays down a no-nonsense style to the art for this issue. All the panel angles are straight on without coming off as flat. The character renderings have a grounded and realistic quality to them, and the action is – in a word – cinematic.

At the risk of sounding redundant, this entire issue reminds me heavily of the better action movies of the ’80s and ’90s. The exploding house looks straight out of a Lethal Weapon (1987) film. Maybe the creative team has a thing for movies released in 1987.

One panel, in particular, caught my eye for its freeze-frame effect I don’t believe I’ve ever seen before. A henchman shoots a gangster in the head, but rather than projecting the typical splatter from the shot; you see the gangsters face bulge out from the bullet’s exit point at the precise moment before the bullet comes out. It’s a panel that’s equal parts disturbing and fascinating to see—really cinematic art here by Bellegarde.

Tamra Bonvillain’s color work is gorgeous in this issue. Rather than muting all the panels to keep it sober and gritty, the colors are almost cheery in their brightness. That cheeriness helps to elevate the absurdity of the violence and infuse the book with a bit of grindhouse ambiance. 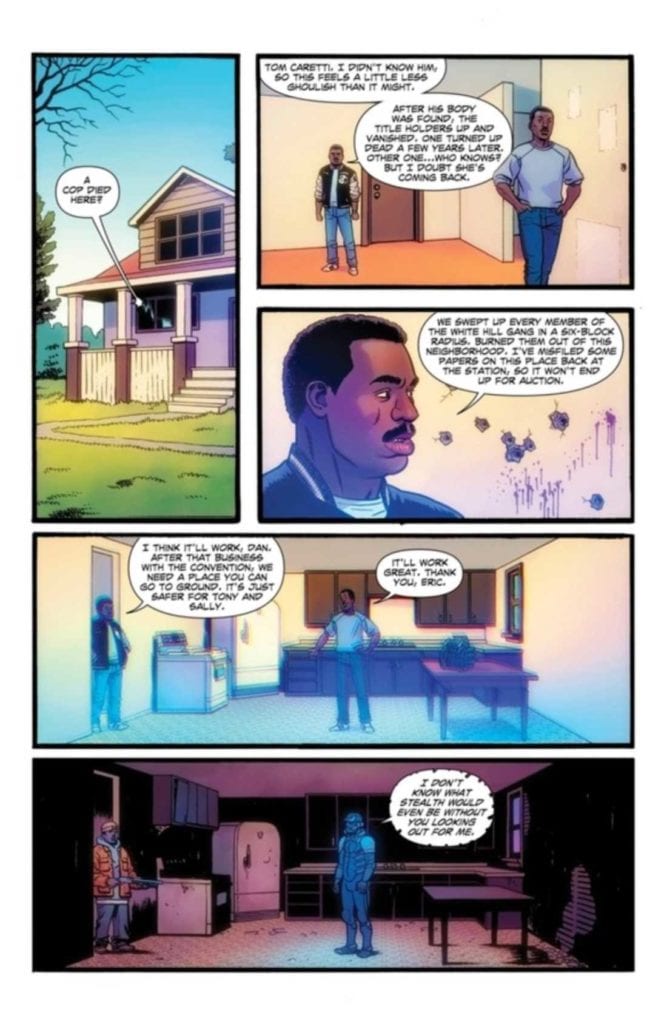 Sal Cipriano’s lettering does well for maximizing every square inch of space. For an action movie-esque issue, there’s quite a lot of dialog going on. Surprisingly, the high volume of word balloons never got in the way of the high-quality art, and it kept the pace moving nicely.

STEALTH #4, available from Image Comics on August 12th, reads like one of the better action movies of the last few decades. The story is action-packed with a few surprising jolts of humor to make the issue thoroughly entertaining. The art is colorful and cinematic, and this issue would serve as an excellent pitch for a film or streaming adaptation.

STEALTH #4, available reads as one of the better action movies of the last few decades. The story is action-packed with a few surprising jolts of humor to make the issue thoroughly entertaining. The art is colorful and cinematic, and this issue would serve as a great pitch for a film or streaming adaptation.Review: STEALTH #4 Is The Action Movie Rental You've Been Waiting For