Writers gave Peter Parker several romantic interests over the years. While Mary Jane and Gwen Stacey are the most iconic, his connection to Felicia Hardy (a.k.a. Black Cat) remains a recurring component of the books. That history is the focal point of Spider-Man: The Black Cat Strikes #1, out this week from Marvel Comics.

The book opens against the backdrop of an organized crime power vacuum in New York. We see Spider-Man interrupt Hammerhead’s crew carrying out a heist at the Museum of Contemporary Art. Everything goes as planned, but Black Cat shows up to retrieve a mysterious object hidden within one of the works, which sets in motion an intriguing story. 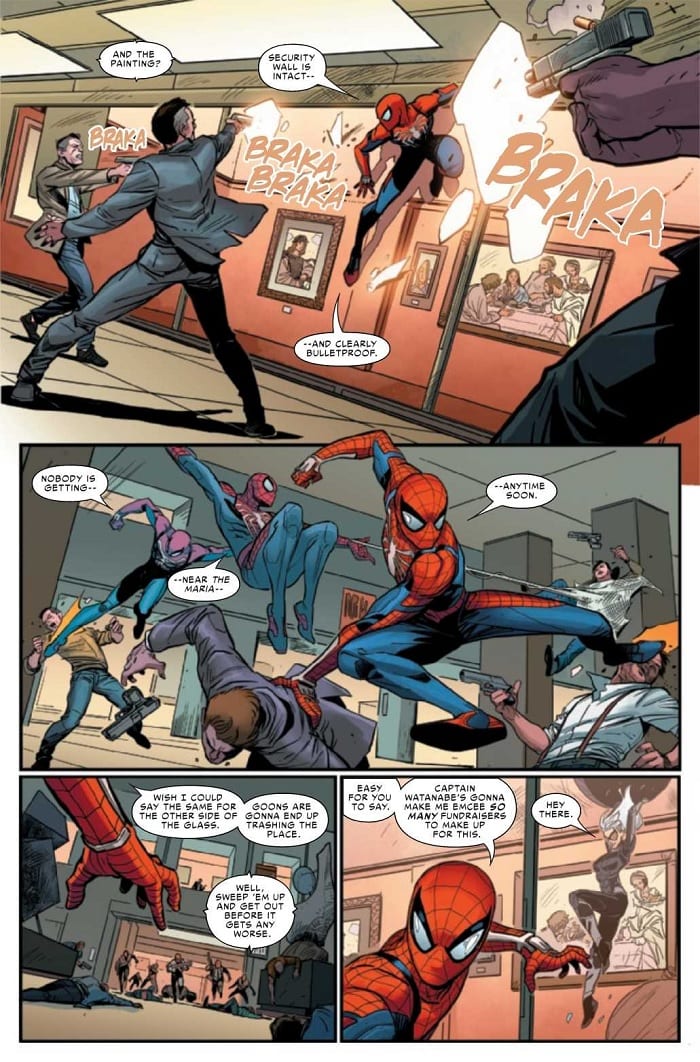 Spider-Man: The Black Cat Strikes #1 delivers snappy writing, for the most part. Writer Dennis Hallum injects a ton of personality into the characters, making them feel simultaneously charming, yet believable.

An extended flashback detailing Peter and Felicia’s first meeting occupies a large chunk of the book. Slipping into a flashback before clearly establishing the main story isn’t typically advisable. However, Hallum manages to make it work here, using sharply-written dialogue to craft chemistry between Spidey and Cat. Some of Spider-Man’s dialogue is a bit awkward at points, but by and large, it’s a great showing.

While it’s nice to see these characters interact, it would be a pretty dull book without something to ground the narrative beyond the extended flashback. Fortunately, Hallum provides just enough of a hook behind Spider-Man: The Black Cat Strikes #1 to draw readers in. The storytelling is compelling throughout, with the book closing on a cliffhanger reveal.

The book doesn’t feel exceptionally dense or substantive from a thematic standpoint, nor does it feel like the opening chapter of a grand epic narrative. That’s not what Spider-Man: The Black Cat Strikes #1 is going for, though.

The writer’s strength here is the use of (mostly) excellent dialogue to sell the book’s charm. It feels like a smaller story, but it’s one that’s worth reading. 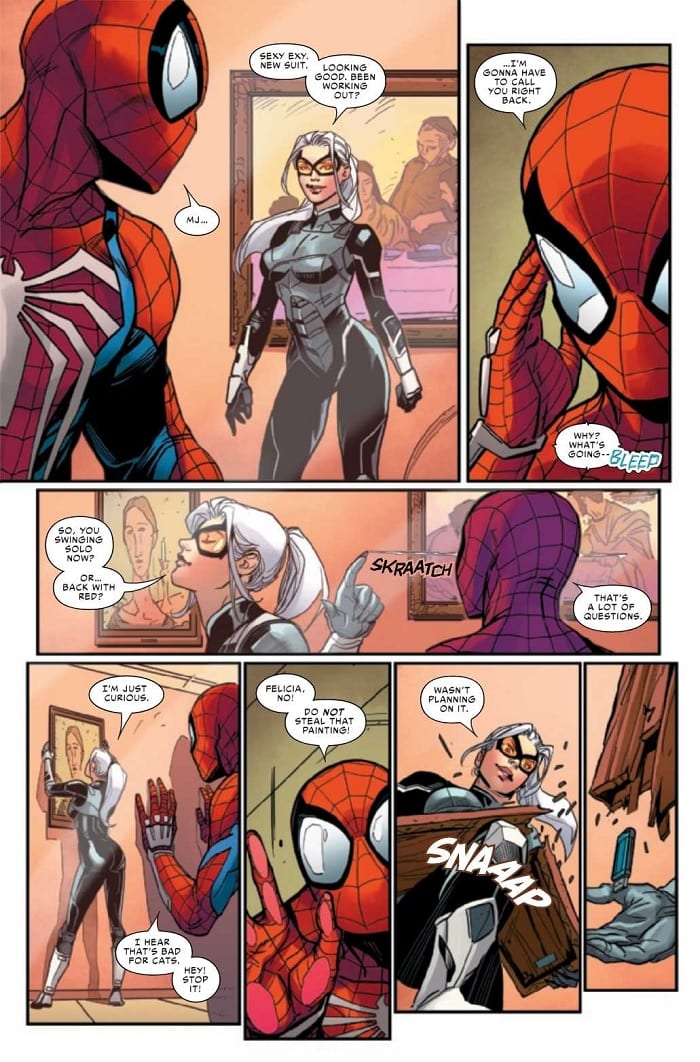 The illustrations by Luca Maresca do a solid job of bringing the action to life in Spider-Man: The Black Cat Strikes #1.

The artist tends to forego extensive detail. While some of the book’s backgrounds are finished, Maresca often opts for minimal or blank backgrounds accented by motion lines. This can cause a bit of confusion from time to time, as the reader doesn’t really have a frame of reference for the lay of the setting. The character designs are strong enough to compensate for the lack of though mise-en-scène, though.

Maresca’s characters feel very natural, possessing a lively, kinetic sense. They’re smoothly-stylized; with a very modern look to the designs. This dynamism carries over into the compositions as well, with panels constantly shifting perspective from one to the next. While there’s not as much of a continuum of motion from one panel to another, the lively action keeps things cohesive and engaging. The action on the page brings the characters to life and holds the reader’s attention. It’s a strong showing overall throughout Spider-Man: The Black Cat Strikes #1.

The colors by Rachelle Rosenberg contribute to the book’s stylized presentation. The artist employs an expansive palette, so there’s no especially dominant tone throughout. However, the softer look of the colors and the use of warm gradients give it a cohesive feel. 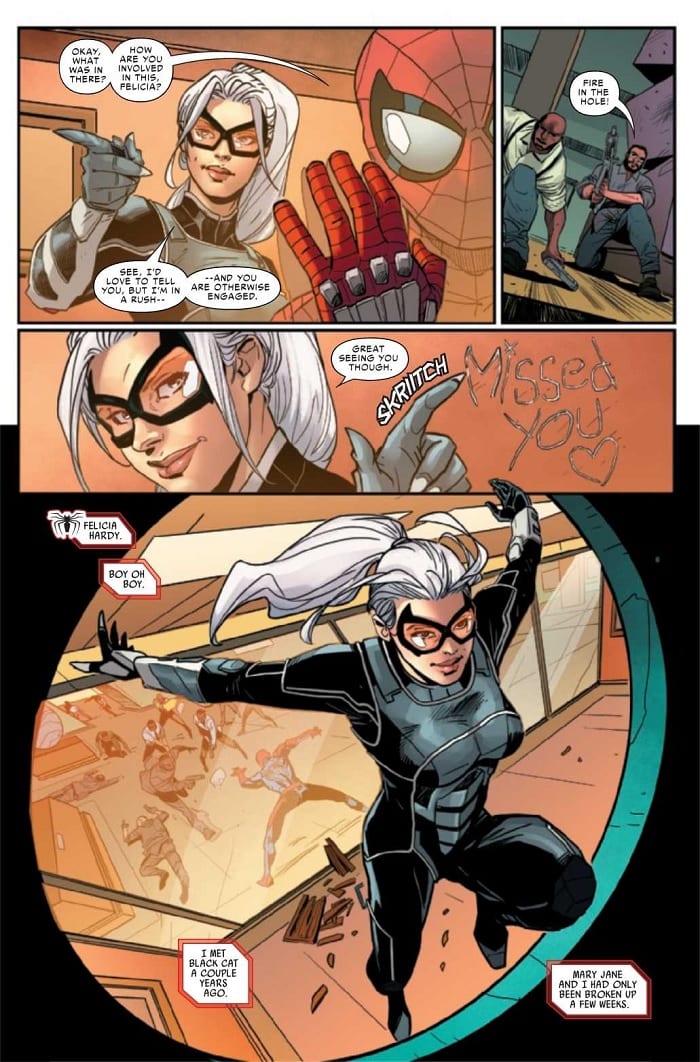 Spider-Man: The Black Cat Strikes #1 is a charming little story. The compelling characterization keeps the reader engaged, while the artwork is easy on the eye. I’d recommend it.