SPAWN #314 hits comic book stores on Wednesday, January 27th, following the aftermath of Al Simmons and Overt-Kill’s one-sided fight with Monolith. The enormous Hellspawn appears to care nothing for kinship, vowing to subdue Simmons and force him to meet the mysterious “master.” What readers will find is the enormous consequences of their hero catching up to him in full force.

Simmons, witnessing the sudden destruction of his friend Overt-Kill at the hands of Monolith, is forced to experience much of the same pain. His Spawn abilities are severely weakened after breaking time a few issues back, leaving him virtually defenseless.

After his pounding, Monolith proceeds to drag Simmons to a make-shift. And what readers behold is an even more menacing Hellspawn than the former. 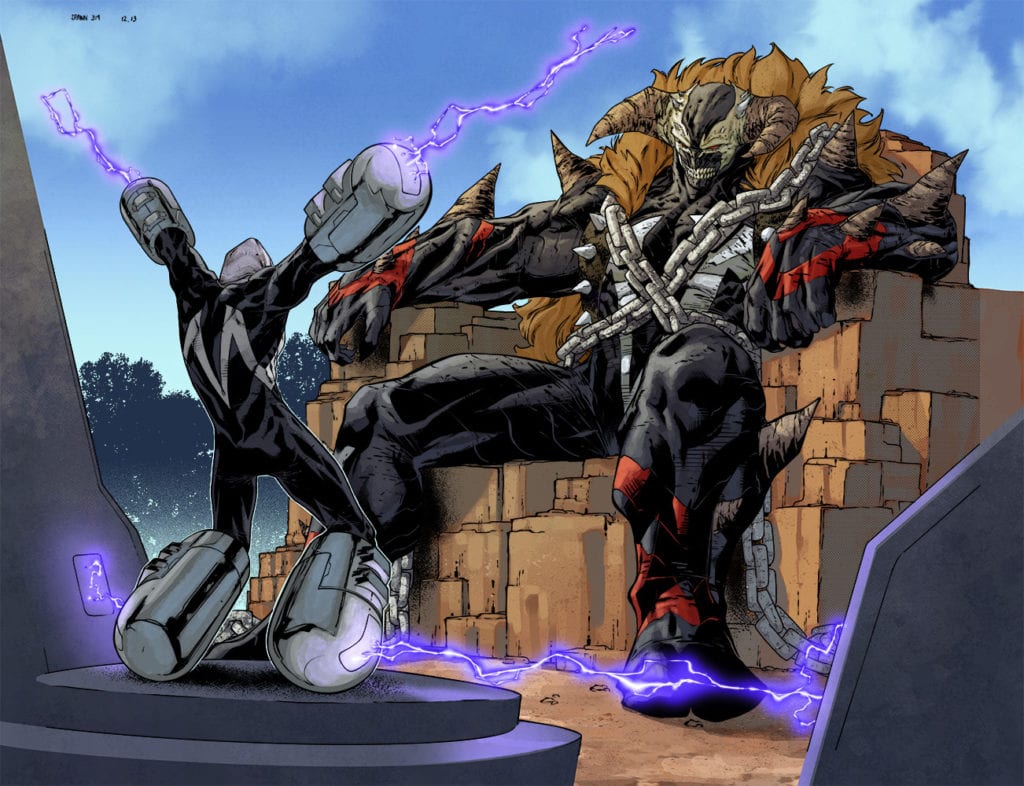 This “Omega-Spawn” expresses his grievances over Simmons decision to detonate his symbiote and fracture reality. Simmons says he felt there was no other choice and that the consequences would be minimal. Unfortunately, Omega-Spawn claims the actions trapped hundreds of celestial beings on Earth, and Cogliostro is seeking to take advantage of the Hellpspawn once again.

Writer Todd McFarlane brings readers along this increasingly hopeless journey as if they were in the story themselves. We watch as the protagonist faces the consequences of his past actions, enduring physical and emotional pain. And with the odds so drastically in his enemies’ favor, Simmons may give up any hope of rectifying his mistakes.

Carlo Barberi’s penciling and ink work, Jay David Ramos’s coloring, and Tom Orzechowski’s lettering harmonize brilliantly in SPAWN #314. The bulky designs of Monolith and Omega-Spawn assert their dominance across each panel. Their forms are brought to life with solid shades of black, red, and orange. In addition, the lettering does a brilliant job of helping the reader distinguish who’s speaking—whether it be the narrator or one of the Hellspawns—using varied fonts and word balloon borders.

SPAWN #314 provides hardcore fans with all the blood, guts, and fighting that made them fall in the love with the series. We are anxious to see if Simmons has a chance in hell of turning the tides in he next issue.

Do you think Simmons has a chance at defeating Omega-Spawn at any point in the future? Let us know in the comments below!

SPAWN #314 provides hardcore fans with all the blood, guts, and fighting that made them fall in the love with the series.Review: SPAWN #314 Shows Why Consequences Always Catch Up