Review: Simmons’ Past Comes To Haunt Him In SPAWN #303

SPAWN #303, available in comic book stores on Wednesday, December 4th, brings Jessica Priest face to face with her former ally Al Simmons, a.k.a. Spawn. The two used to fight alongside one another against supernatural forces seeking to destroy the world. But Priest’s recent discovery of her own Hellspawn powers has her asking questions, and she deems Simmons to be the person to answer them. The question is: Will Simmons greet her with open arms, or a fit of fury?

Simmons, scarred by years of betrayals and false pretenses, reacts to Priest’s appearance in a flurry of blows. He exemplifies the “fight-or-flight” mentality in flying colors, wrapping his former ally in chains from the bowels of Hell.

Priest, responding to her predicament in a fit of rage, unleashes her newly acquired Hellspawn powers and breaks the bonds. She informs Simmons of the recent death of their mutual acquaintance, Nyx. We learn that she’d been researching the rise in Hellspawn, drawing evil supernatural beings to her doorstep. But Priest concludes it was ultimately due to Simmons spreading of the Spawn necroplasm in various people (in case he ever died and needed a back-up plan). 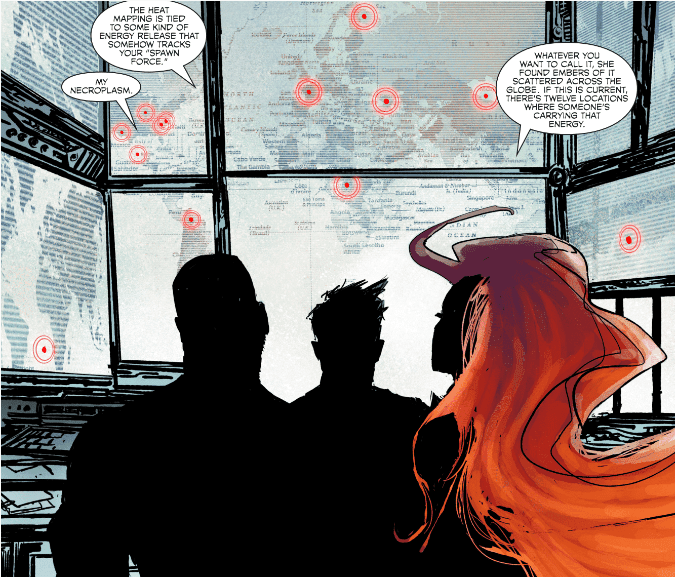 Todd McFarlane’s script flows smoothly from page to page, acting as a third-person omniscient narrator to hep reader’s share in Simmons’ experience. We feel his guilt at having triggered the rise of Hellspawn beings, leading to the death of an innocent person. But the time for self-pity is short-lived; Simmons must figure out why Priest and the others’ became Hellspawn and how to face the consequences of their awakening.

McFarlane, Jason Shawn Alexander, and Peter Steigerwald’s illustrations for this issue worked together beautifully. Each scene is cast within dark shadows, revealing Simmons, Priest, and the other characters via dim lights and sharp, jagged lines.

Tom Orzechowski’s lettering was a great asset as well. The stark differences in size and color between Simmons and Priest’s voices when in Hellspawn form emphasizes the raw emotion felt by the characters.

Francesco Mattina’s main cover artwork features Simmons rising out of a hellish swamp in Spawn form, giving leaders an up close view of the titular character and his growing power.

McFarlane’s wonderful Cover B features the mysterious medieval version of Spawn, a character teased in this issue. This makes us wonder if the character was one of those Hellspawn awakened in recent issues.

Taking on Cover C as well, McFarlane uses the same illustration from Cover B but removes all color. This offers up a more mysterious vibe than the original.

The tale told within SPAWN #303 dives deeper into the possibility of multiple Hellspawn creatures walking the Earth. As if warring demons and angels wasn’t enough, Simmons will have to deal with the ramifications of his actions in future issues.

Do you think the newly created Hellspawn beings will fight on Simmons’ side? Let us know in the comments below!

Review: Simmons' Past Comes To Haunt Him In SPAWN #303Todd McFarlane's script flows smoothly from page to page, acting as a third-person omniscient narrator to hep reader's share in Simmons' experience.