Spawn #296 hits your local comic book store this week, and Todd McFarlane takes the reader down memory as the series approaches its 300th issue.

McFarlane wrote the script, with plotting help from Jon Goff. Jason Shawn Alexander delivered some amazing art, the letters are by Tom Orzechowski, and Fco Plascencia & Greg Menzie worked on the color palette for issue 296.

ABOUT THE ISSUE:
“THE LIFE AND DEATHS OF AL SIMMONS,” Part One The road to SPAWN’s record-setting 300th issue BEGINS HERE!!! Witness the secrets of Al Simmons’ past, present, and future!!! Every hero! Every villain! Revisit Spawn’s legend in an epic, wide-screen story from critically acclaimed illustrator, JASON SHAWN ALEXANDER, and legendary creator, TODD McFARLANE!
###

With McFarlane working on the Spawn movie reboot, this march to the 300th issue has piqued my interest. I have no clue what the character has been up to since about issue 50, and there have been a handful of recons and reboots to the comic series, so who knows what’s in store once you flip the first page of 296. To my surprise, the book is set up for a brand new reader or a person who hasn’t read the book for the past 245 issues. There’s a nice recap on the inside cover that sets up the story. Then the issue itself is the equivalent to a greatest hits album, with the bonus of a timeline index on the last two pages so you can go back and read older issues. Goff and McFarlane make it so easy for you to understand Spawn’s complete complicated history in 20 pages. They do all this and give the reader an intriguing end point where I wanted to read more.

SIDEBAR – It will be interesting to see how much of the script from this book will be used in the film as it quickly establishes who and what Spawn is. 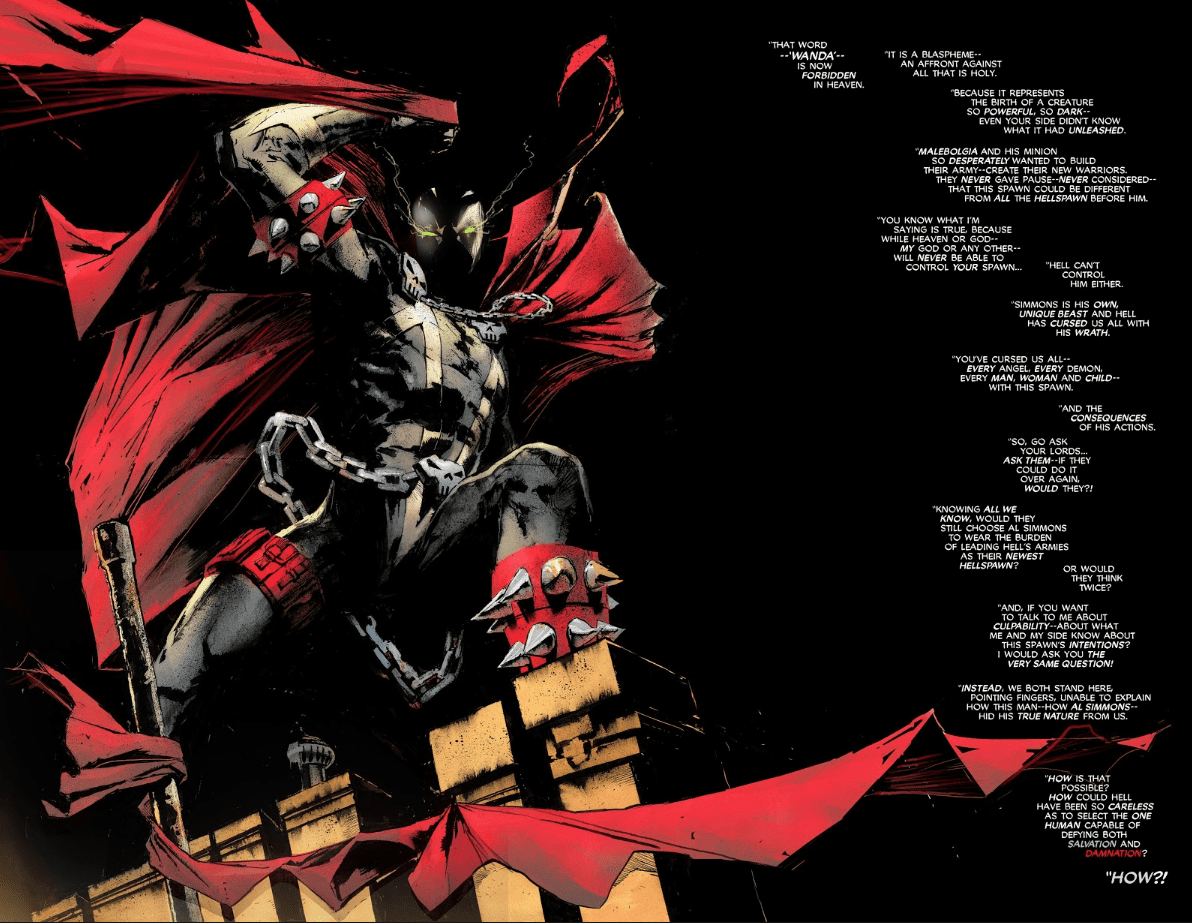 Alexander’s art on this issue is like a Bill Sienkiewicz / McFarlane mashup! Each page is an iconic moment from Spawn’s history and Alexander blows it out of the water. The blood, sweat, anger, and rage rips through the issue. His art is very raw and punk rock. My favorite page from the book is the one above this paragraph. We’ve seen this pose from Spawn a million times, but the raw inks still get under your skin. The image is perfect and warped at the same time. Plascencia and Menzie deliver perfect colors on this page with the rich black that sucks all life out of it. The iconic cape is alive and flowing, ready to choke the life out anyone that crosses its path (including Al).

Overall, Spawn #296 got me hyped for the story arc and reminded me why I loved the series as a kid.

2464
Find out how to get the
Monkeys Fighting Robots magazine!

Review: DAREDEVIL WOMAN WITHOUT FEAR #1 Is Striking and Emotional

Review: THE SWORD OF HYPERBOREA #1 Is A Very Pretty Gap-Filler