Review: SERA AND THE ROYAL STARS #1 A Mysterious Magical Mythos

Have you ever wished Aladdin was a bit more violent and had dragons? Well, Sera and the Royal Stars is what you’ve been hoping for.

A new premiere issue from Vault Comics, Sera and the Royal Stars dives headfirst right into the action. At least to me, this creative team is unknown. Writing this magical war fantasy is Jon Tsuei. Penciling, we have Audrey Mok with the coloring done by Raul Angulo and lettering from Jim Campbell. The great thing about new titles from independent publishers is they have to stand out. They have to hook people quick. They have to convince you to buy their book rather than one of Marvel’s 38 variants for whatever book it released that week. The interior art in this book is fantastic; the colors are vibrant and pop off the page, the character designs are as if Assassin’s Creed smashed right into Aladdin. The dialogue and narratives are easy to read and follow. Thanks to pretty basic lettering that is always tried and true. 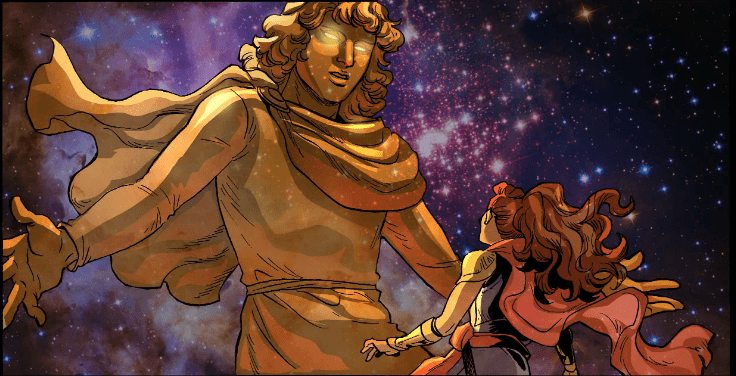 This story opens with what appears to be the end of a battle, as the first characters we see are collecting their dead, but things aren’t as they appear. Lines are forming, and the battle is upon them yet again. In the midst of war, our main character is thrust into some cosmic dimension, the only other being here is named Mitra and she gives an ominous message about celestial lights and physical realms that only confuses Sera. BAM! Right back to the fighting, Sera wakes up in her world and is told her incapacitation coincided with a solar eclipse. As they escape the battlefield, two hooded characters talk about sensing the presence of a “Yazata,” most likely some magical race, also that a new era is beginning. Later, after Sera has fallen asleep, she is back with Mitra, and in my favorite part of the book, Mitra removes Sera’s heart and replaces it with a glowing crystal of some kind. When she wakes, she assumes it was a dream until she sees that her chest is glowing and is engulfed in a vision of an apocalyptic future that awaits if she does not do what she has been chosen for.

In what appears to be a story of a clashing family, the enemies Sera has been fighting since the start of the book, are led by her uncle, brother of the king. The capital city of Setareh has an Aladdin feel as well, surrounded by a wall, and the city has a huge palace in the center. On her journey, Sera is told of a temple occupied by strange magic. Inside she encounters an old man and a humanoid lizard army sent by a dragon that would very much like to cut out her heart, we learned earlier that might not be a good decision on their part. The lizard army appearance opens this world up into more fantastical possibilities where humans are not the only inhabitants. The reveal at the end is an illustrious cliffhanger to keep you coming back for issue #2 and beyond.

A new independent magical fantasy from Vault Comics gives us the first chapter in what promises to be an expansive universe destined for the big or small screen.Review: SERA AND THE ROYAL STARS #1 A Mysterious Magical Mythos