Review: PRETTY VIOLENT #1 Is a Pleasurable Gore-fest Of Cartoon Violence

If over the top violence and strong language is your thing, then Image’s new series Pretty Violent will rip out your guts! This colorfully violent ongoing is out this Wednesday, full of gore and lots of swears, delivering on everything its title promises.

In this day and age, everyone wants to be a hero, even someone whose family members consist of villains. That’s where Pretty Violent #1 begins, with our main character Gamma Rae and her desire to be different. Having been born strong, she (unlike her siblings) has the desire for good deeds–not wicked. But with every dream comes the crushing of said dreams, and the crushing of body parts.

Over the course of Pretty Violent #1, Gamma Rae learns just how hard it is to become a hero while learning how hard it feels to be hit with a dead body. Writers Derek Hunter and Jason Young violently present the plot in the first few page, showing what our main character desires and how a world filled with heroes this desire will become a violent gore fest. 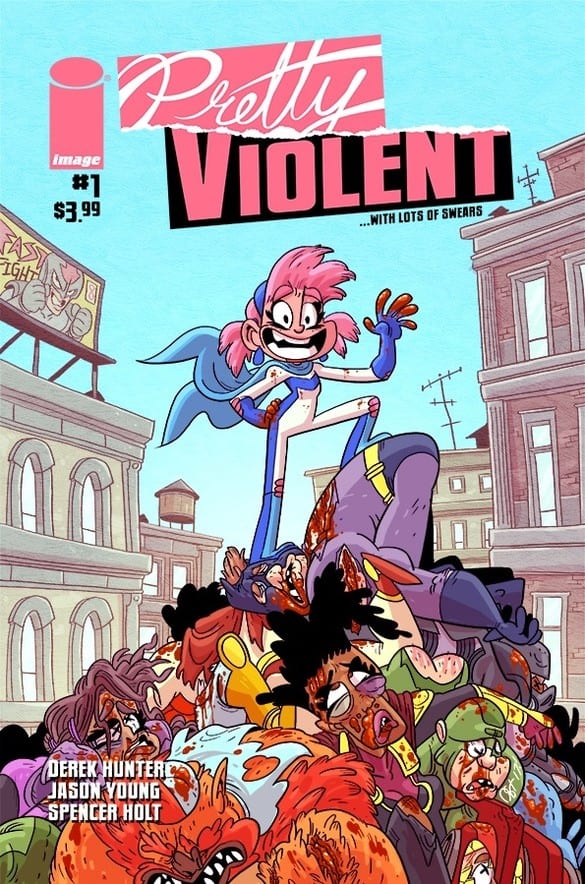 Gamma Rae goes through multiple setbacks throughout Pretty Violent #1, but is constantly covered in optimism (and gore) for her goals. At points she gets literally caked in gore, yet her costume stays clean. Either that’s a superpower in itself or she has a great tailor! She has a cape so we know it’s not Edna Mode.

With art that’s reminiscent of Adventure Time and other new age cartoons, it makes sense that Pretty Violent #1 is drawn by Derek Hunter, who was an animation designer on the show. Hunter draws a colorfully violent world where Gamma Rae’s adventure to becoming a hero leaves a wake of bodies. Brains splattered, guts ripped asunder, and many other acts of horrific violence are drawn in such a cartoon matter that they seem more fun than it should.

When having a character ripped in half, not many artists think to make it fun or have the guts spell out DEAD, but that isn’t the case with Hunter’s art in Pretty Violent #1. Bright colors by Spencer Holt mixed with flavorful uber violence help carry Gamma Rae story to becoming a hero. If Pretty Violent #1 was drawn in anything other than over the top cartoon antics it wouldn’t work as well as it did, or stand out as such.

Violence spills from the panels into the white space of the pages causing fights to seem bigger than keeping them confined in panel. Hunter does this playing with panels in a few different instances and ways to make Pretty Violent #1 be exactly what its title implies. This unique take on art doesn’t stop on just the art side, but Hunter plays with speech bubbles, dialogue and sound effects. 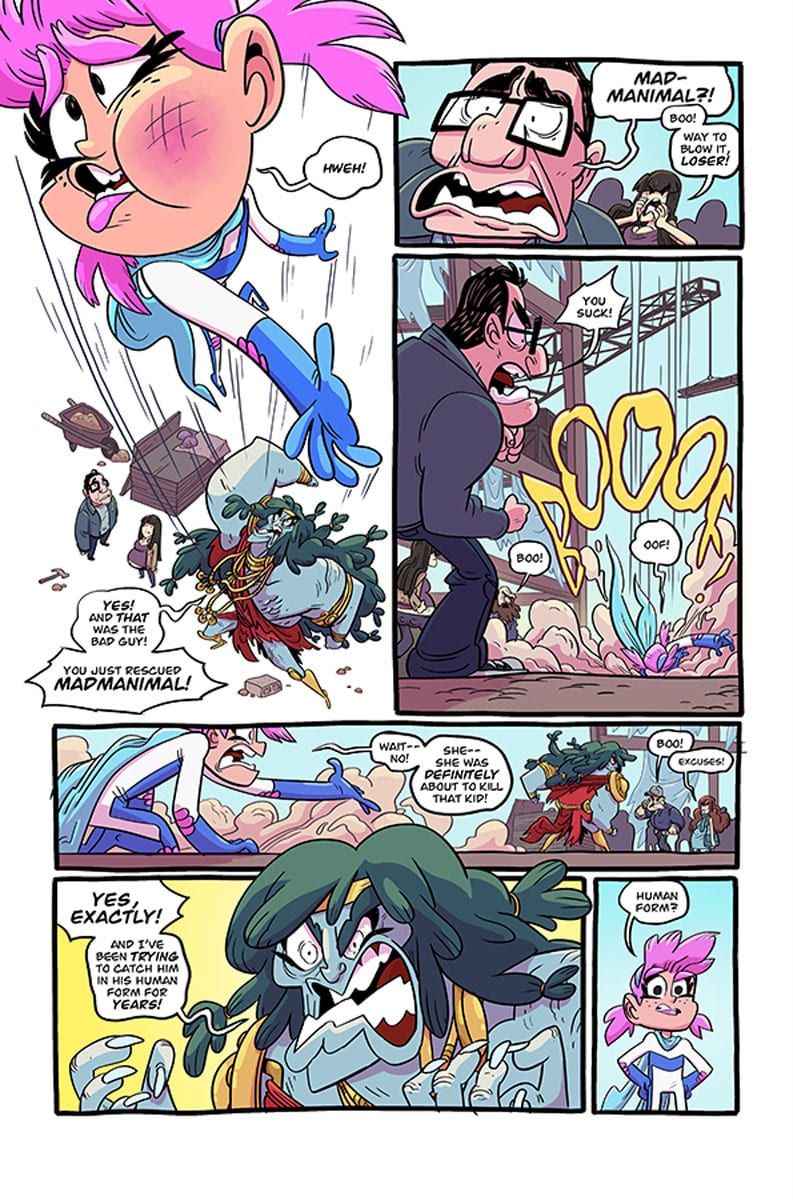 Onomatopoeia and sound effects are a highlight in comics, but aren’t used often in different or fun ways. Granted that could be because more and more comics feel the need to be “serious” to be the next classic, but Pretty Violent #1 has no care about any of that. Instead Pretty Violent #1 is more concerned with having fun and making the reader feel as if they’re watching an adult version of Saturday Morning Cartoons.

Gore and body parts aplenty, Hunter uses this to his advantage by turning blood or guts into sound effects. This method makes it so the violent hits in Pretty Violent #1 feel more dramatic and akin to a cartoon. Much like a cartoon, Hunter makes the emotions of characters feel overdone. This use of overdone or overly drawn emotion is seen in most cartoons and works perfectly in this universe.

Over the top violence in Pretty Violent #1 wouldn’t have worked to such a great effect if not for Holt’s vivid colors. Hearkening back to its cartoon nature Pretty Violent showcases majestic use of brighter and lighter coloring mixing in with the gore. With this colorful take on violence the images pop off the panels that much more.

Pretty Violent #1’s art carries this debut issue more so than its plot. The characters may be fun and over the top, but that’s all. The story doesn’t break boundaries for comics, but damn will you have a fun time reading it. Unlike other comics that are trying to be the next Watchmen or such, Pretty Violent doesn’t seem to be going for that, going instead for a story where you can pick it up to enjoy beautiful, gory, over the top violence that will stick in your head.

Pick up Images Pretty Violent #1 at your local comic store this Wednesday!

Pretty Violent #1 is a great gory adult Saturday Morning Cartoon filled with over the top violence, swear words, and an understanding of its audience. These elements are mixed perfectly resulting an a colorful concoction of mayhem and uber violence that will take your mind off the real world.Review: PRETTY VIOLENT #1 Is a Pleasurable Gore-fest Of Cartoon Violence