There are lots of comics out there that don’t have much of a point. They deliver gasps, laughs, and gut punches, and then they just end. No big takeaway. No moral. Just a story for the sake of story. I love comics like that. They’re fun and entertaining. But every once in a while, you need a comic that isn’t about the fistfights or the villainous monologues. You need a comic that has a point – that makes you think. DC Comics’ One-Star Squadron #4 has made its home in the tension between these two kinds of comics. Writer Mark Russell, artist Steve Lieber, colorist Dave Stewart, and letterer Dave Sharpe have created a world that has plenty to say, populated with characters that wish they were just there to tell a flashy story.

Russell isn’t trying to be subtle with the points he’s making. He’s making it all too clear: success is a castle with a moat. Once you’re in, you pull up the drawbridge and keep the whole damn thing to yourself. As Powergirl cruises through town, listening to Max Lord’s book on tape, we hear plenty of similar ideas. But One-Star Squadron is also a superhero comic. You get characters like Red Tornado, who used to be on the Justice League, fighting against capitalism with all the drama of a battle to save the world. Red Tornado’s inner monologue is full of melodramatic soul-searching, that’s often comedically oblivious to its own intensity.

At one point, through an anguished admission of feeling spared from a round of downsizing, Red Tornado says he feels “Like a kid who just survived another round of musical chairs.” These are superheroes that Russell is writing, but they’re facing the monotony of office jobs instead of the schemes of Darkseid. You can practically see them looking at the other books on the shelf, wishing they were fighting for their lives and not their careers. 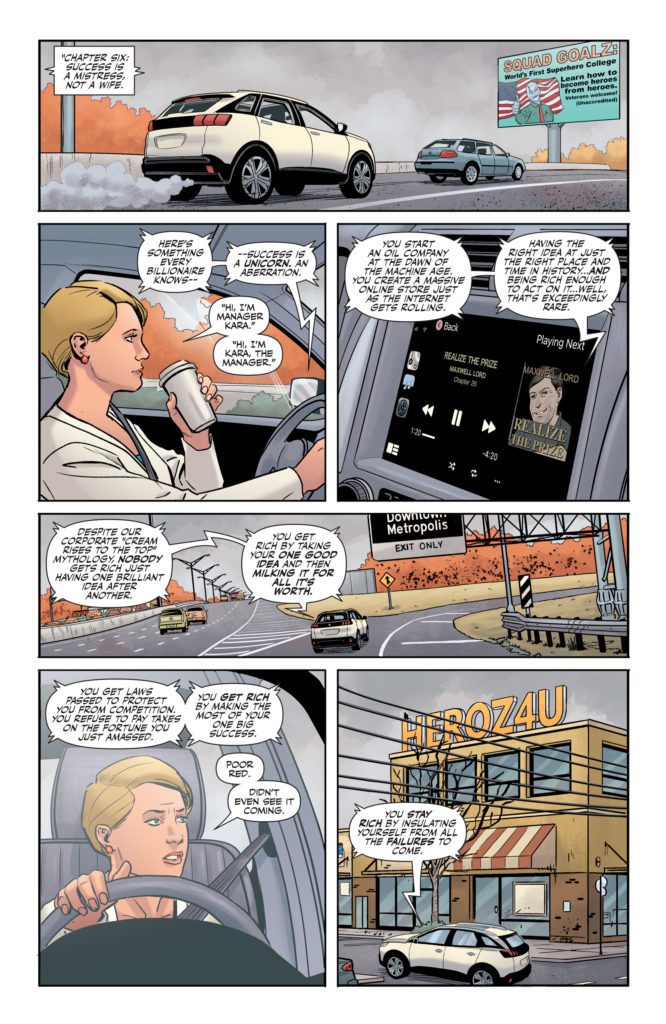 Lieber’s art is similarly pulled in two directions. It’s hard not to laugh a little when you see Flying Fox walk into Red Tornado’s office. He’s wearing his superhero costume – what amounts to a loin cloth and a cape – while sitting on a desk. The image is ridiculous. But Lieber doesn’t overdo it. He leans into the emotion of the scene too. Flying Fox is there to beg for his job. He might stand out like a sore thumb, but the quietly resigned look on his face will break your heart. One-Star Squadron #4 also takes place during Halloween. So every scene of this rather heavy plot is peppered with smiling ghosts and grinning pumpkins. Lieber simultaneously cuts through the tension and piles on the misery. It’s funny that such depressing scenes are happening around such goofy decorations, but it also has a sad irony to it. 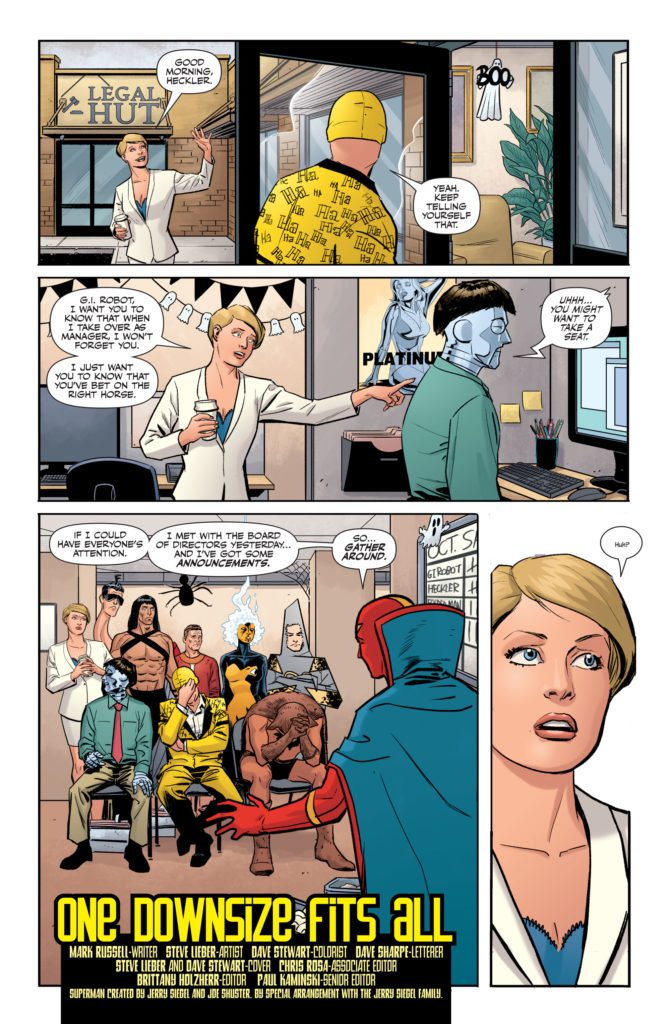 Speaking of sad irony, Stewart’s coloring is full of it. I’ve mentioned before that Stewart’s coloring is rarely very bright. The brightest colors are always shown in the superhero costumes of our characters. Everything else has a natural look to it, with plenty of browns, greys, and blues. As always, we get plenty of Red Tornado’s crimson skin. As a robot, he doesn’t have the luxury of hanging up the ol’ superhero duds when he gets home. His insignia is painted right on his chest. His cape follows him everywhere. Often, Stewart uses the vibrant colors of Red Tornado as a juxtaposition to the bleak events that are going on. He exists as a harsh reminder that these characters once lived a full, rich life before they left it all behind. But in One-Star Squadron #4, we see a brief moment where Red Tornado feels like his old self. Instead of being the striking patch of color in the corner, his blues, reds and yellows take up the majority of the page. For one glorious moment, Stewart shows us an island of brilliance in a faded sea.

There isn’t a ton of action in One-Star Squadron. So when we get fight scenes and battles, Sharpe makes sure that they pop. At one point of One-Star Squadron #4, a character begins fighting a group of people. Every sound effect is shown in neon lettering. Phrases pop out of word balloons in red, orange, or yellow letters. The scene looks like something out of your typical superhero comic. Except that this isn’t a typical superhero comic. So when a page like this comes up, it’s very noticeable. And in making it look like other superhero comics, Sharpe also shows how fighting might be what this character feels most comfortable with. He’s used to throwing punches. He’s not used to sitting at home and trying to be peaceful.

DC Comics’ One-Star Squadron #4 is depressingly aware of the facts. Success is a commodity that’s hoarded by a few, and shared with no one. In One-Star Squadron, even legendary Justice Leaguers have to figure out where next month’s rent is coming from. This would be a hard pill to swallow if it weren’t also delivered with a ton of laughs. Pick up One-Star Squadron #4, out from DC Comics March 1st, at a comic shop near you!