Review: Nonchalance In HELLBOY AND THE BPRD: HER FATAL HOUR

Writer Mike Mignola, artist Tiernen Trevallion, colorist Dave Stewart, and letterer Clem Robins come together to bring us Dark Horse’s Hellboy and the BPRD: Her Fatal Hour, a two-part issue about looking monsters right in the eye and yawning. “Her Fatal Hour” and “The Sending” show the sheer skill of the BPRD. These kinds of cases are just another day to them.

Mignola shows us just how used to this world his characters are. Hellboy, fighting a monster off of a girl, encounters a ghost at one point. “Save her,” the ghost says. Hellboy isn’t phased. “Workin’ on it,” he says before diving back into the mayhem. This is the heart of a lot of Mignola’s charm. He downplays the moments other writers would be tempted to overdo. Yet Mignola does overplay one moment.

Two BPRD agents stand outside of Hellboy’s room as he is “tossing and turning in his sleep.” What he’s really doing is fighting a monster. The entire sequence seems to take a while. Hellboy catches up with an old friend before the fight even starts. These BPRD agents apparently spend the whole time outside Hellboy’s door. It’s an odd moment where Mignola lets himself get a little too enraptured by his own character. It’s one of the extremely rare examples of Mignola lacking a touch of subtlety. Something he more than makes up for elsewhere in the script. 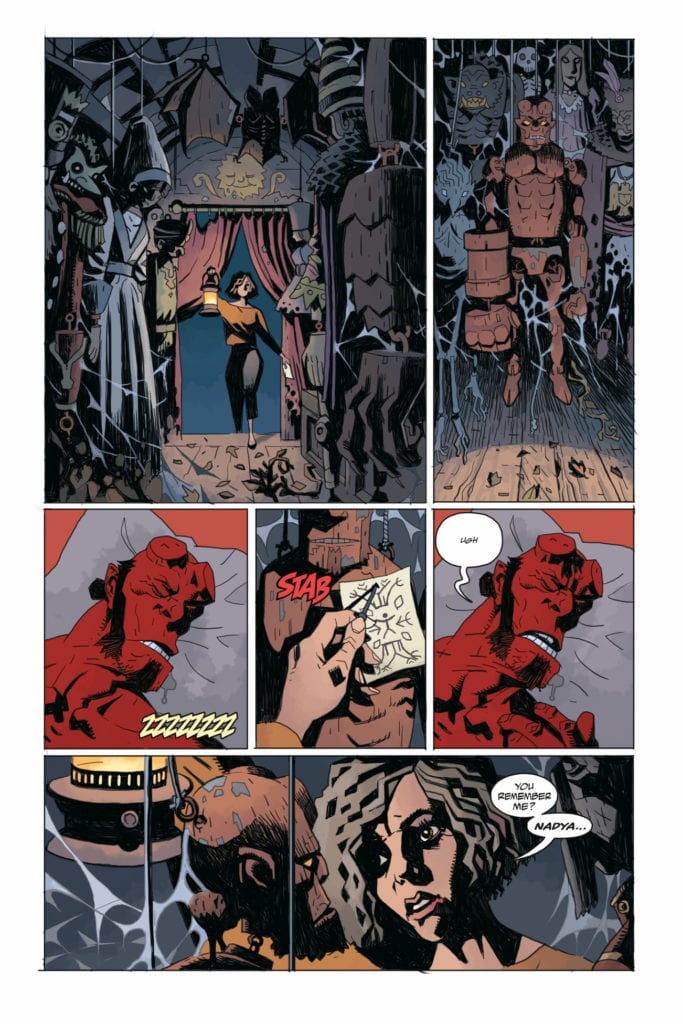 Trevallion strikes a careful balance in approaches when creating this work. He pulls from both Mignola’s minimalism and Duncan Fegredo’s attention to detail. Some scenes, like Hellboy’s room, Trevallion adds in all the right details. A “High Noon” poster on the wall, dirty plates and empty cans on the floor. Other times, Trevallion pulls back. When one character holds their dying mother, Trevallion removes all signs of a background. It’s the two characters, alone against a blank white space. This makes the moment feel like nothing exists outside of it. It’s sad, it’s lonely, and it’s all we need to see to feel what Trevallion is communicating.

Stewart creates such a calming feel throughout these panels. When no one is fighting, you can visibly see the safety in the gentle colors. When Stewart is coloring flashback scenes, he uses a dark purple color palette. At first glance, this looks almost calming. It’s as though all the events are happening in a kind of twilight. But as the flashback scenes progress, Stewart shows us that the “twilight” is a warning of the coming darkness. A bold red panel shocks the reader back to reality, reminding them that the stakes are rising. 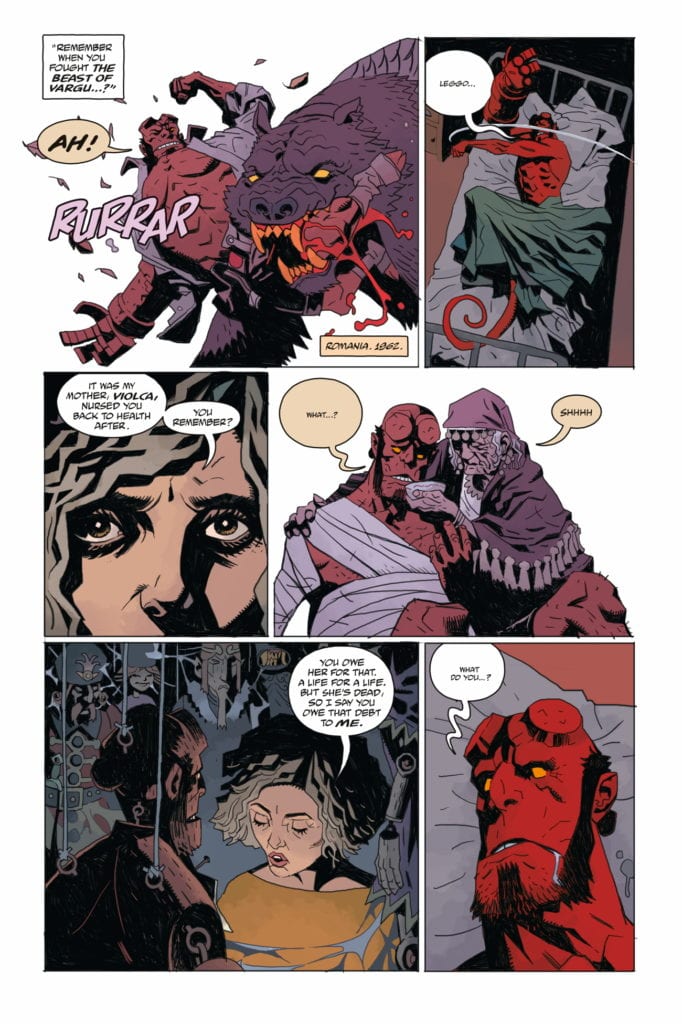 Robins also brings a lot of the “wake up calls” into each fight scene. The bright blue of the “SMAASH” or the pink “THUD” make the scenes feel full of action. At one point, when a ghost zooms into the room, Robins places the “AAAAAAAAAAAAAA” noise it’s making behind all the characters. This makes the noise feel like it goes on forever. Like it envelops the room. So later, when Hellboy grabs the ghost and the “AAAAA” is shown lower and in front of the ghost, it feels like there has been a shift in the dynamic. It’s these subtle differences that Robins uses to show who has the upper hand.

This issue is about drinking whiskey in the aftermath of a monster fight. It’s about shopping for books on a page strewn floor of the site of a ghost attack. This creative team wants to show us just how normal goblins and ghouls are to the BPRD. Dark Horse’s Hellboy and the BPRD: Her Fatal Hour is out December 2nd at a comic book shop near you. Pick it up there and also catch our own exclusive interview with this issue’s artist, the brilliant Tiernen Trevallion, here!