Review: NIGHTWING #79 is the Sunny Day Before the Storm

Dick Grayson has a pretty big fanbase. People love everything from his days as Robin to his time as a secret agent. Nightwing #79, from DC Comics, makes it clear that writer Tom Taylor, artist Bruno Redondo, colorist Adriano Lucas, and letterer Wes Abbott are some of Dick’s biggest fans. DC Comics’ Nightwing #79 is a fun, goofy, earnest celebration of all things Nightwing.

Taylor provides lots of laughs. But this issue is also full of heart. We see Dick dealing with the repercussions of the last issue. What can he do with his newfound wealth? His back and forth with Barbara about this conundrum is funny, but it’s punctuated by real moments of soul searching. Occasionally, Taylor wanders into the territory of patting himself on the back. Funny things happen and other characters comment on it. Sometimes, it’s hard not to see that as Taylor pointing out the joke he made. But these instances are also a sign of how enthusiastic Taylor is about this project. And these moments are quickly pushed aside when Taylor introduces real terror into the script. For every laugh, he makes us gasp. This sunny start to Taylor’s run on Nightwing is already showing the signs of taking darker turns.

Redondo’s work in this issue is a love letter to the whole comic book medium. He shows a splash page of Dick Grayson through the years. He uses Ben Day dots to emulate the art styles of each era. Throughout the issue, Redondo is constantly playing with page layouts. At one point, Dick and Barbara sit and look at a statue as they talk. On the left hand side of the page, Redondo places the statue. On the right hand side, he places panel after panel of Dick and Barbara’s conversation. Not only does it make it so the statue exists outside of the same time frame, but he also makes it look as though Dick and Barbara are looking at the statue as they talk. On every page, Redondo experiments with space and time. It often feels as though characters can look from one panel to see the next. Nightwing #79 is easily some of Redondo’s best work! In the splash page of Dick Grayson through the ages, Lucas is very specific with his coloring. The first image we see, of the Flying Graysons, mimics the four color printing method of old comics. The same can be said of the old images of him as Robin. But as we get into the Teen Titans era, Lucas makes things more colorful. There’s still the faded and flat look of an 80’s comic, but it’s not just primary colors anymore. And finally, as Nightwing runs off into the modern era, the colors look deep. The reds are vibrant, the blues are dark, and the coloring is used to show light sources and shadows. It’s a fantastic and subtle tour through comics’ history. 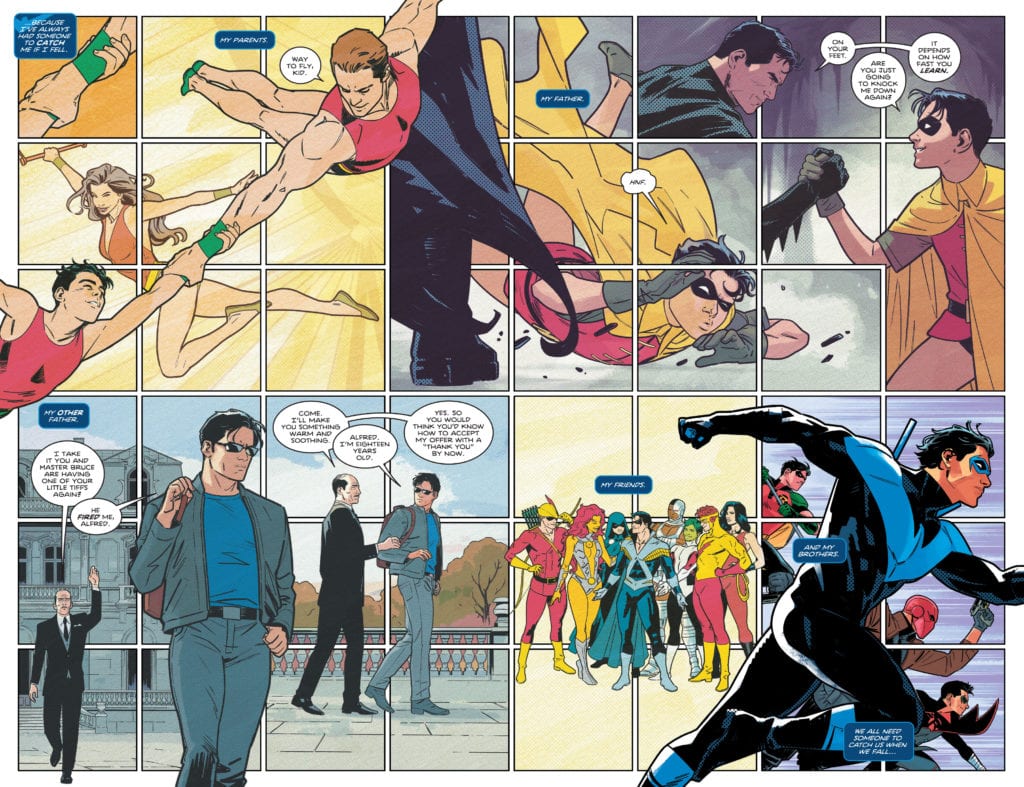 Abbott uses height to add a lot of tone to the dialogue. When a word balloon is shown low on the panel, it feels laid back or quiet. Barbara’s “You’re a billionaire now,” reads differently than Dick’s “Oh, right,” which is just underneath it. It almost seems like Dick is muttering that to himself. When he speaks up again, his word balloon is at a normal height. “Four slices, please.” Without the change in height, we lose some of the comedy of this moment. It would still be funny, but Abbott adds that layer of Dick almost talking to himself. Throughout the issue we get these little moments: Barbara quietly saying Dick’s name as he’s ranting or a father calming his son as they’re being mugged. Abbott’s levels can make a moment playful or heartbreaking. But, thanks to this approach, no moment ever feels flat.

DC Comics’ Nightwing #79 is a blast. It feels like a birthday party for Dick Grayson. This creative team is having lots of fun with this series. But, we’re also seeing a dark new chapter rear its head. Pick up Nightwing #79, out from DC Comics April 20th, at a comic shop near you!

DC Comics' NIGHTWING #79 is a blast. It feels like a birthday party for Dick Grayson. This creative team is having lots of fun with this series. But, we're also seeing a dark new chapter rear its head.Review: NIGHTWING #79 is the Sunny Day Before the Storm