MIDDLEWEST’s angsty protagonist Abel is on a mission to find a way to deal with the uncontrollable power inside of him. Led into The Winter Woods by the mysterious god Nokoyuna last issue, our hero came face to face with his demons—both internal and external. He met his grandfather, but soon learned the seemingly kind-hearted man was in fact a monster, showing even more destructive tendencies than Abel’s father. Now our hero finds himself back in Middlewest, searching for a way to cope with this additional trauma, all the while believing any hope of curing his power is lost.

Fans of this series can continue the epic adventure when MIDDLEWEST #11 hits stores on Wednesday, September 18th.

Abel’s companion Fox, having been forced to wait outside of the Woods, is enthusiastic upon the return of his best friend. Though usually playing the role of sarcastic commentary, Fox shows his “humanity” in his loving care for the distraught Abel, even when the boy ignores him completely as they enter the shady Piper City. In this way, writer Skottie Young captures real emotions in a fantastical relationship between a boy and a talking fox, a clear case of absolute writing brilliance. 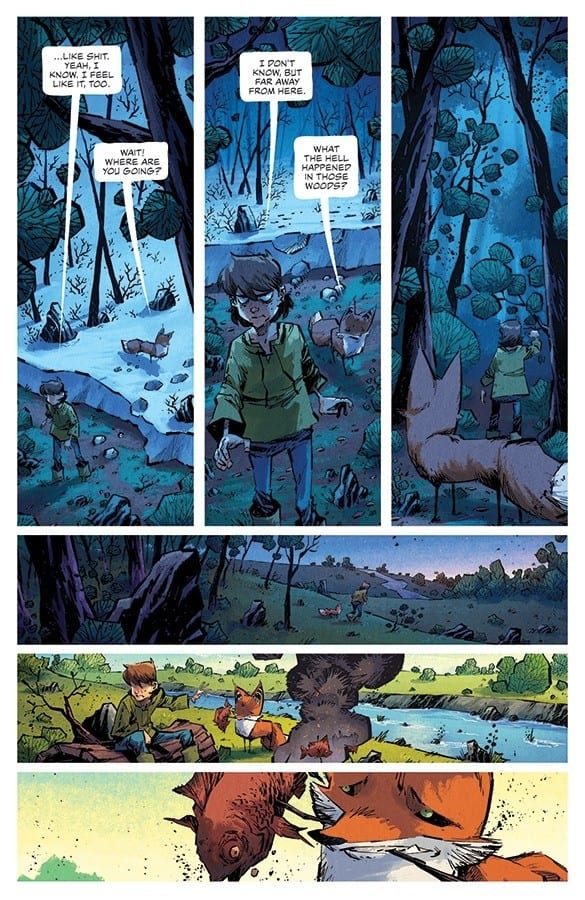 However, one can only take so much neglect in any relationship before emotions explode, leading to a fight between the duo. Abel storms off alone into the city and is abducted by a human trafficker almost immediately, adding to the constant snowballing of his problems. The trafficker loads Abel up into a van full of other young boys and sets off for another location. This threat, like the emotion of every character in this book, is very real, preventing any form of fantasy escapism. But hope is not lost; Fox tracks the truck to the human trafficking base and begins devising a plan to save his friend. 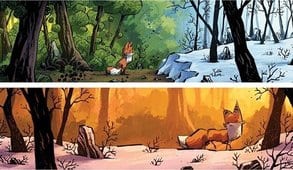 Jorge Corona’s penciling and inking, Jean-Francois Beaulieu’s coloring, and Nate Piekos’ lettering work continue to give this series a flavor unlike any other. The seamlessness with which the forests near the Woods shift to the the industrialized landscape of Piper City keeps readers engaged the whole story. And the book’s lettering uses bold words at just the right moments to capture the raging emotions of Abel, Fox, and the other characters, making their interactions all the more relatable.

Corona’s cover art features Abel and Fox, standing back-to-back, against a backdrop of industrial machinery to highlight their entanglement with Piper City. Each character appears to be glaring at the other from the corner of their eyes, emphasizing an anger, however reluctant, toward their companion.

MIDDLEWEST #11 is a dramatic story highlighting the painful realities in one’s relationships—with family, friendships, and even with oneself. We’re anxious to see how Abel and Fox navigate the dangers of Piper City.

What did you think of Piper City? Let us know in the comments below!

Review: Depression's Effects On Relationships Explored In MIDDLEWEST #11MIDDLEWEST #11 is a dramatic story highlighting the painful realities in one's relationships—with family, friendships, and even with oneself.