Take the cartoony style and unapologetic violence of I Hate Fairyland, add a main character that’s one part Garfield the Cat and two parts Rocket Raccoon, throw in some satirical references to The Punisher and Daredevil, and you’ve got the dark, brutal world of Meouch. 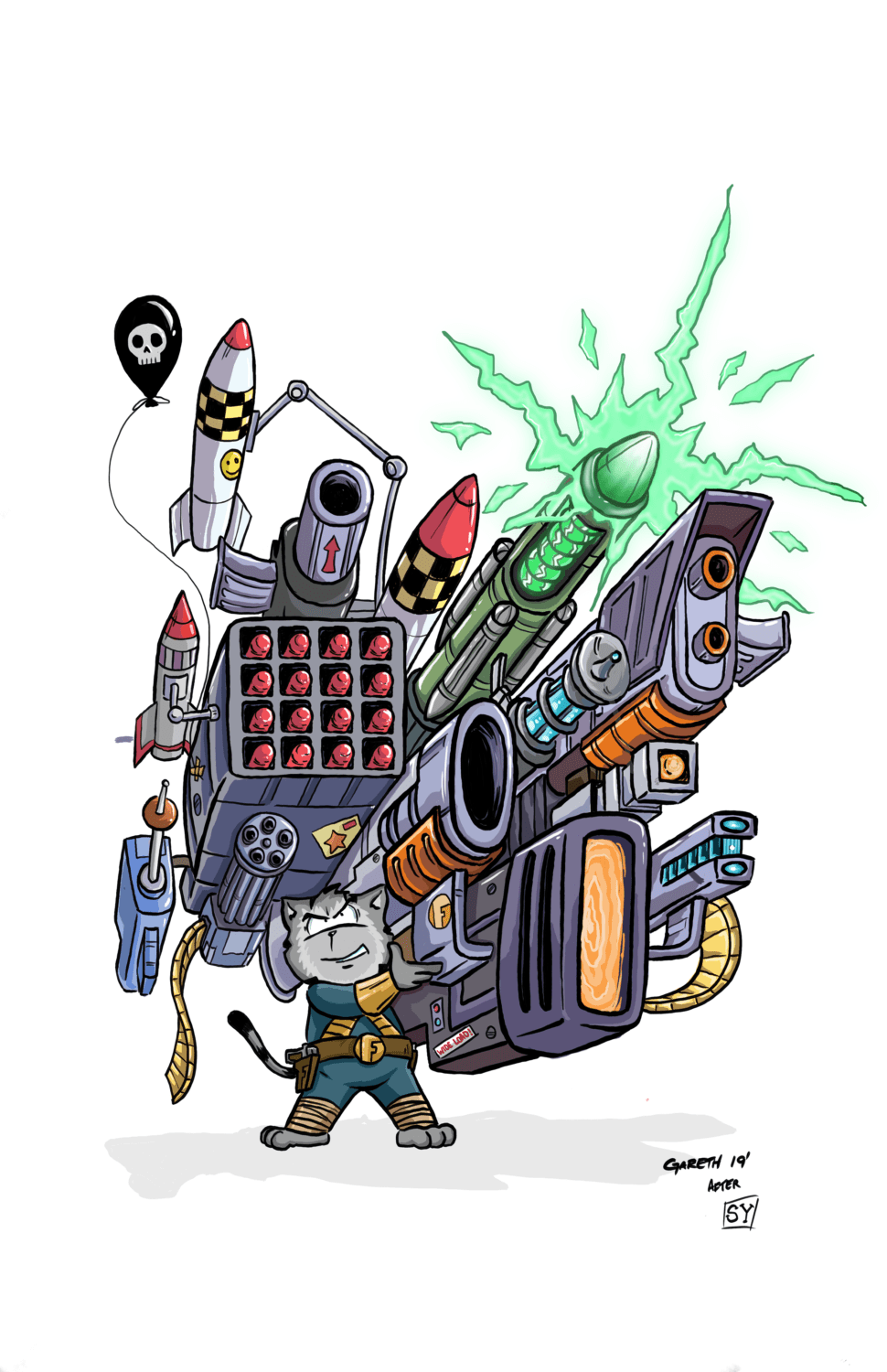 Drawing inspiration from Deadpool, Rocket Raccoon, and the work of Skottie Young, Meouch is an action-comedy comic featuring a gun-toting, pun-cracking assassin cat named Frankie. In the series’ first issue, Frankie is up against a deadly litter of killer cats known as the Nine Lives, whose handy work is getting in the way of his business.

Written by Paul Carroll, Meouch is a well-structured foray into this world. Readers are quickly given a sense of the gritty, neo-noir tone with introductory captions and enough blood, decapitations, and brain matter splattered throughout the book. Frankie is immediately established as a vulgar (those “fluffling” puns aren’t fooling anyone) and no-holds-barred feline with a enough of an interesting motivation to want to follow him into the underbelly of his world.

Meouch is fairly light on word count, leaving more room for the bloody action sequences in the panels. Overall, Carroll delivers a fun read that doesn’t take itself seriously whatsoever, except with its silly puns and spoof-y references.

Gareth Luby’s illustrations bring the words and action of Meouch to life with a curvy, cartoony style akin to Garfield and Tom and Jerry. The blood splatter and brain matter is not off-putting. It also doesn’t leave much to the imagination.

The colors of Joe Griffin only enhance the R-rated Saturday morning cartoon style presented in Meouch. Most notable is his use of dark pink coloring of blood. It looks more like a can of jelly that exploded instead of someone getting a bullet to the head.

Hassan Otsmane-Elhaou’s letters are a nice contrast to the big and animated illustrations. They are jagged, looking as if they have been etched into the pages with a small knife.

Meouch #1 is a fun read. It packs the high-brow humor from the cartoons of yesteryear and adds a heaping scoop of blood and guns. If you enjoy Rocket Raccoon, Deadpool, The Punisher, or Teenage Mutant Ninja Turtles, do yourself a favor and pick up a copy.

Check out the first few pages of Meouch #1 which is is set to launch at Dublin Comic Con this weekend: 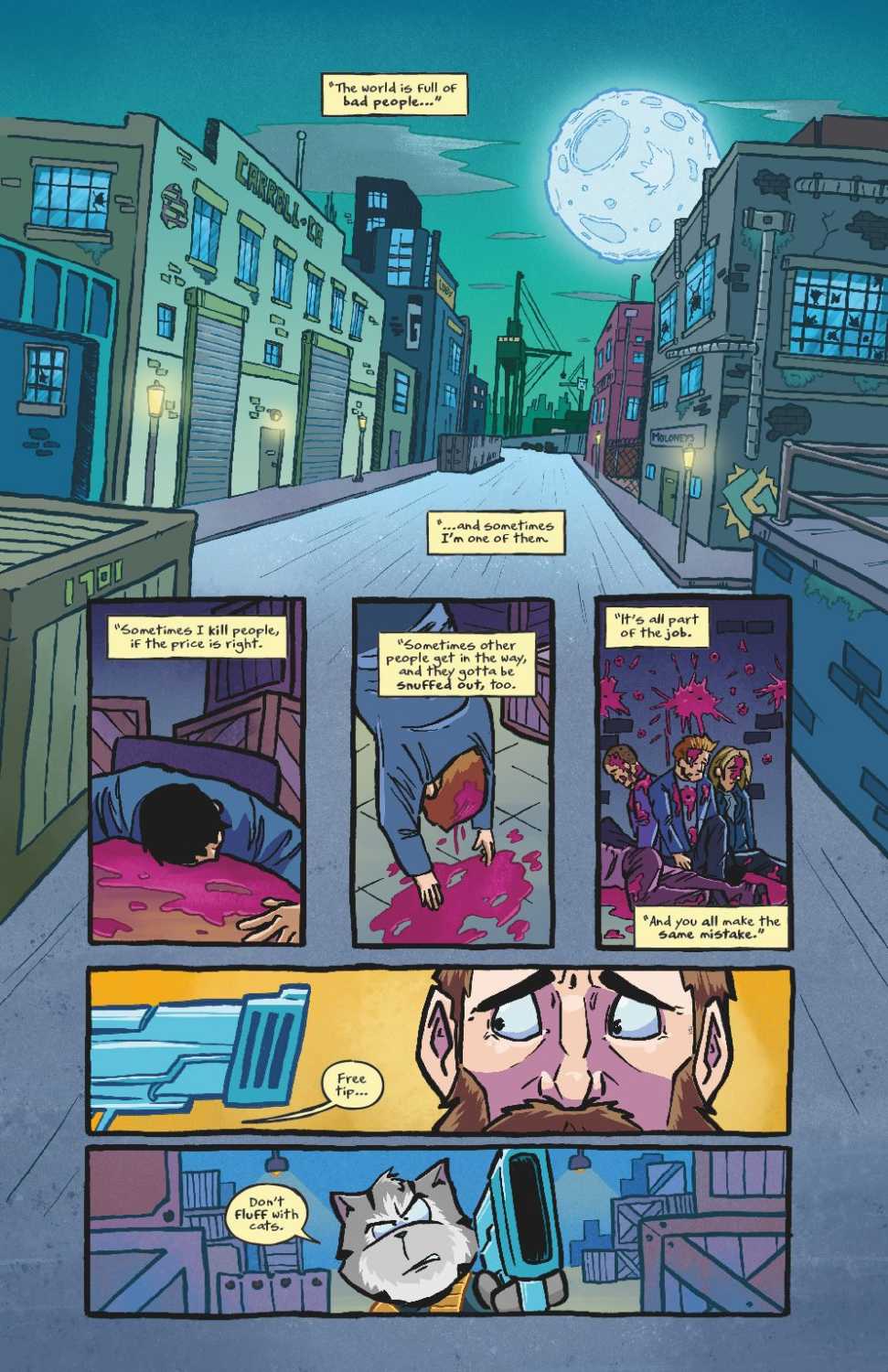 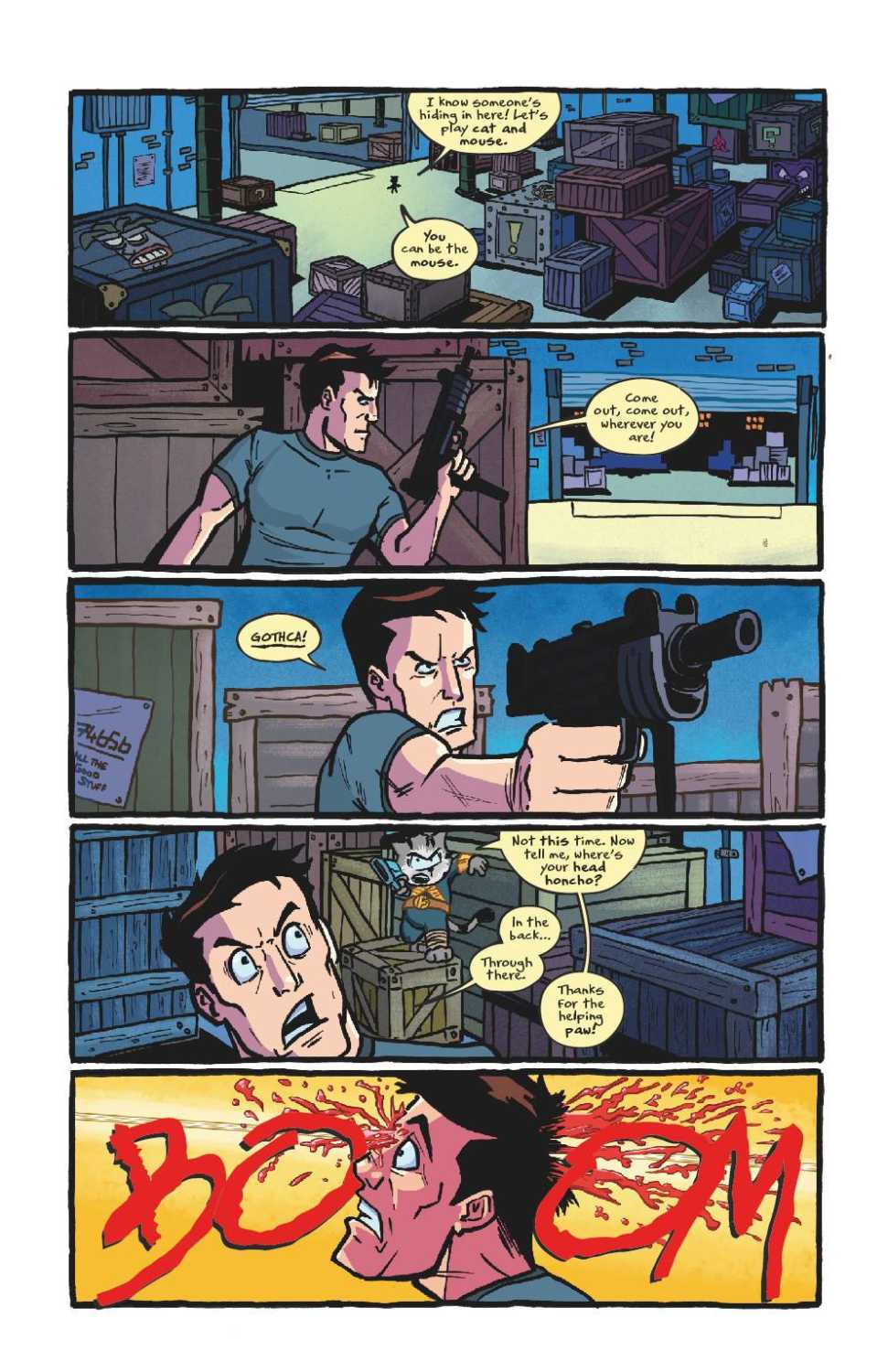 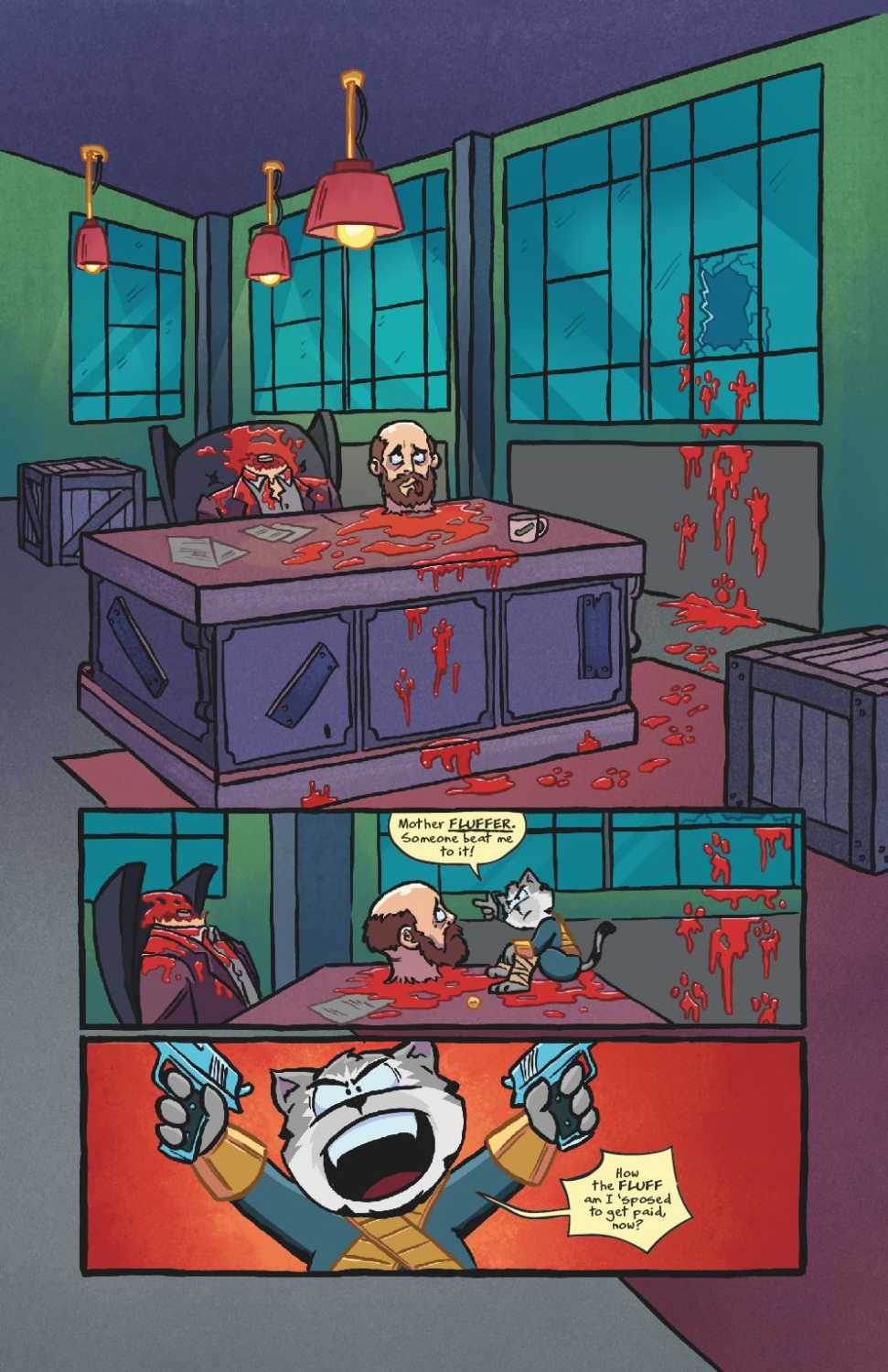 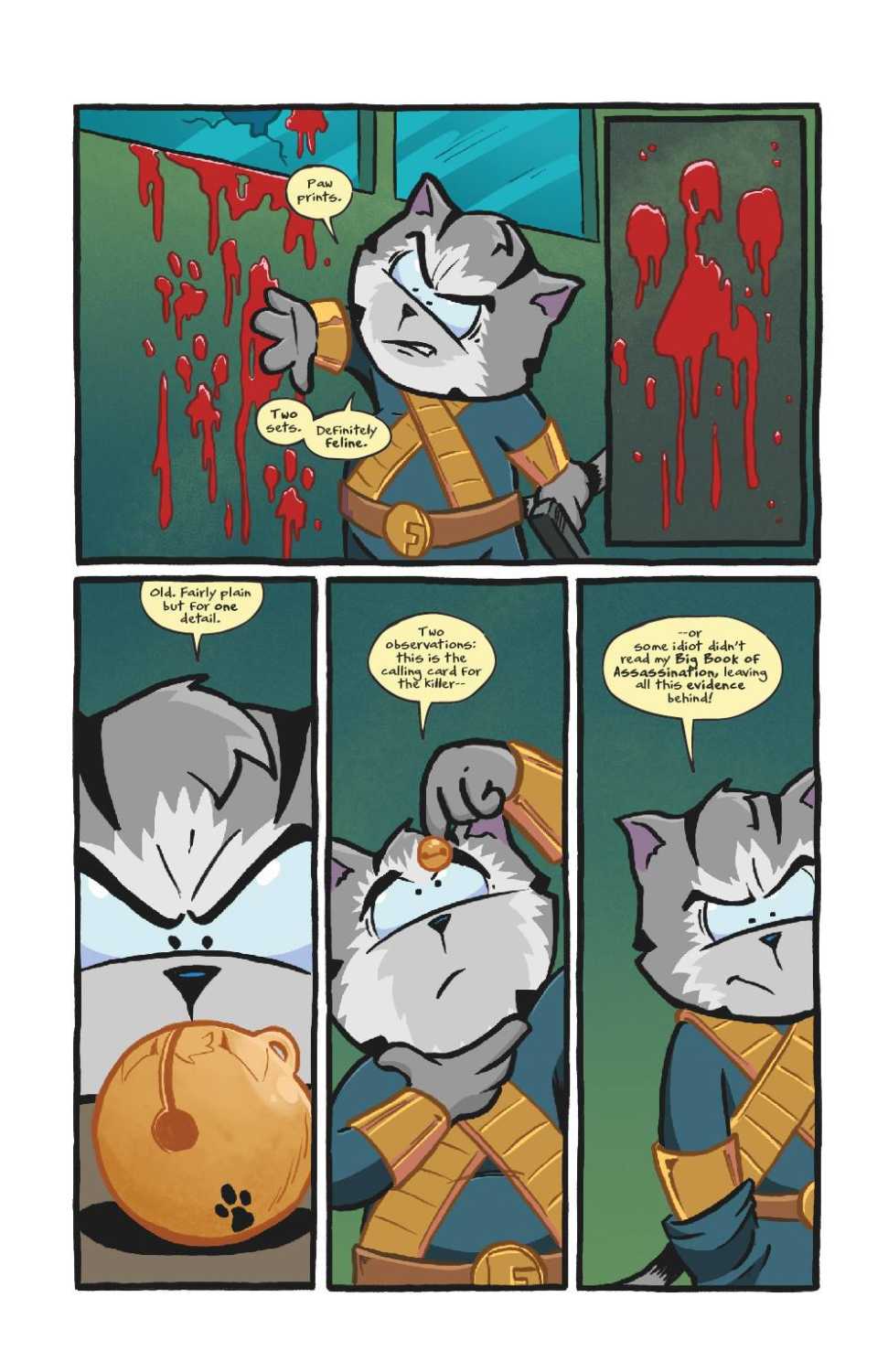 It’s a fun, bloody book for anyone who enjoys animal puns and anthropomorphic assassins.Review: MEOUCH #1 Is Deadpool Meets Rocket Raccoon