Mega Man: Fully Charged is a new comic book series from BOOM! Studios based upon the 2018 cartoon series of the same name. While the cartoon was canceled after a single season, this first issue sets the stage for a profoundly entertaining and completely different experience. Mega Man is a character that has been around since 1987 and has a special place in the hearts of many. The classic series now has twelve installments and has spawned several spin-off series, which each have multiple games. The series has an incredibly long history and a devoted fan base, so it was no surprise when Capcom decided to create a new cartoon series with the blue bomber. Mega Man: Fully Charged first aired on Cartoon Network in 2018 and was received… poorly. The story told was entirely different from what fans of the series liked, and the cartoon didn’t stand out enough to attract enough of a newer, younger fan base. It stopped airing after a single season, and no news has surfaced about the show returning. Despite the lackluster reception of the show, this new comic book series features many of the same characters. The major difference being a distinct tonal shift and change in the target audience that allows the world created by the cartoon to be used to make a promising first issue. 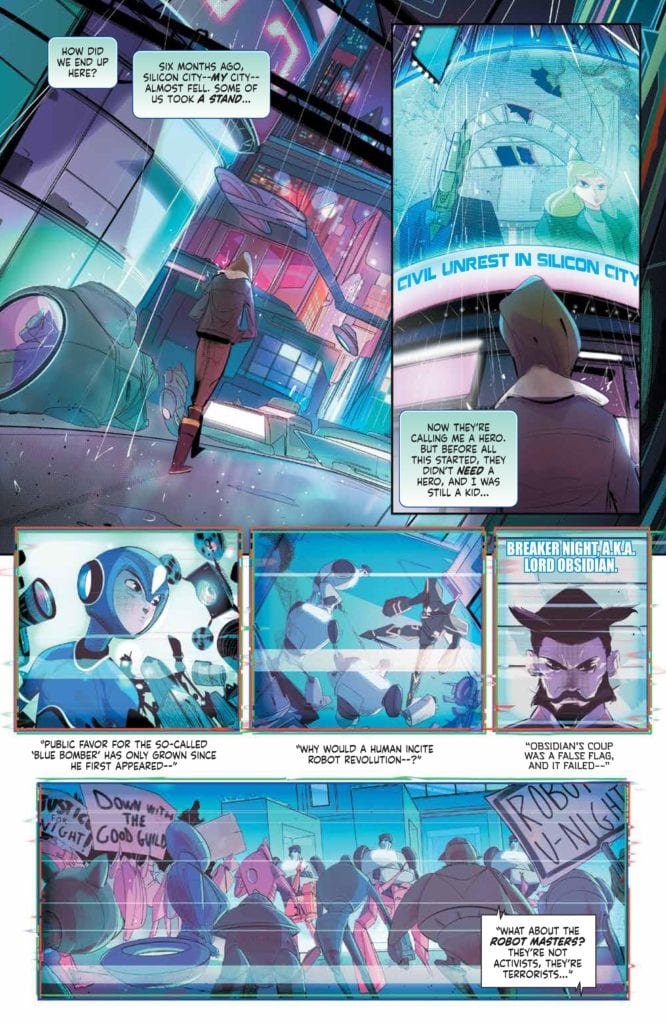 Just like the cartoon, Mega Man: Fully Charged focuses on Aki Light, a robotic kid with the ability to transform into the superhero, the public knows as Mega Man. Created by and the surrogate son of Thomas Light, Aki lives with his sister Suna and his dog Rush. He also enlists the help of a robotic partner called Mega-mini that spends time in Mega Man’s helmet when he is engaged in battle.

What I believe is the smartest aspect of Mega Man: Fully Charged is the evident tonal shift from the cartoon. A.J. Marchisello and Marcus Rinehart make it very clear from the beginning of the issue that this new series will not be aimed at the same audience. This is evident from the first page of the issue, which gives the story background that a robot revolution has occurred, and humans and robots are engaged in a civil war. The war is a brilliant way that Marchisello and Rinehart immediately distance the comic book from the cartoon. 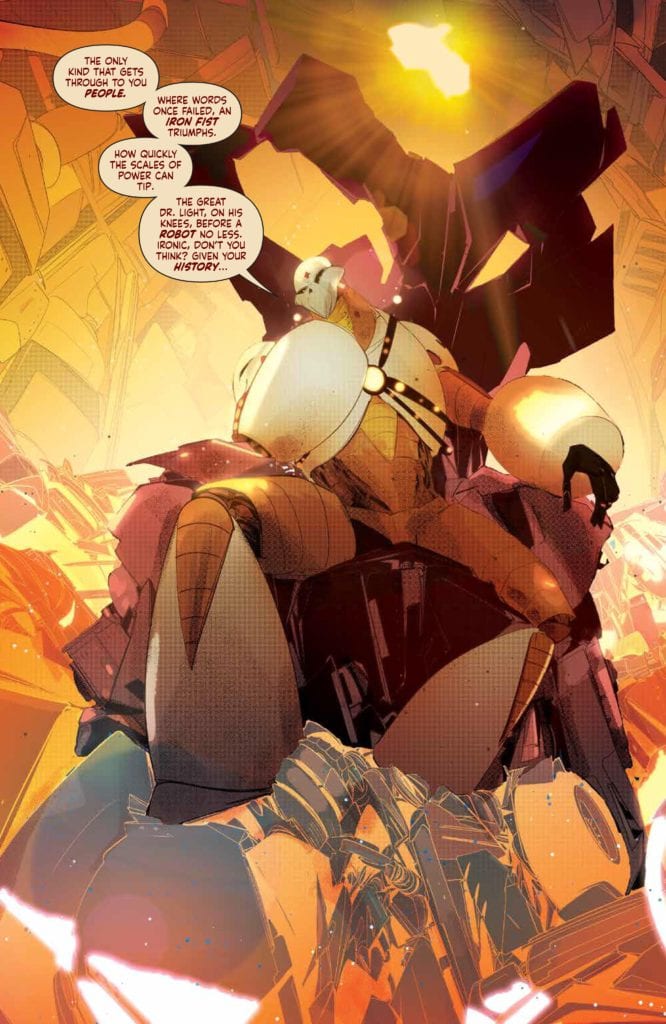 One of the most important aspects of a first issue, and an aspect that Marchisello and Rinehart perfect, is planting seeds and beginning stories that hook the reader in and leave them wanting to read the next issue. In the single issue there are characters who are shrouded in mystery, reasons to doubt characters we thought we could trust, and internal struggles of Mega Man. Mega Man: Fully Charged #1 feels like nothing but reasons to continue following the series, and after finishing this issue, I’m not sure how you could not.

There are not many ways to describe the illustrations of Stefano Simeone except that they are stunning. Mega Man: Fully Charged #1 gives all of the characters a wonderful stylized look, and the redesign of Skull Man immediately excites readers for new versions of their favorite robot masters that lie in the issues ahead. Also, his interpretations of the main cast immediately let the reader know that what they are reading has a much more serious tone than the cartoon series. 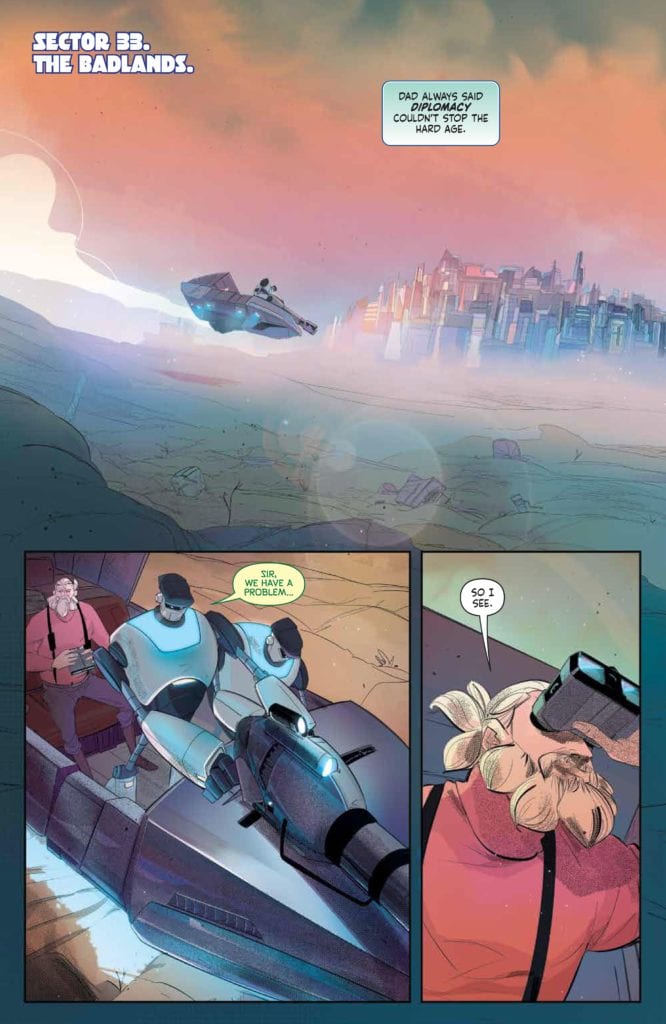 The coloring of Igor Monti in Mega Man: Fully Charged #1 is a highlight of the issue. Each scene looks astonishingly beautiful due to his work. Whether it be the cyberpunk Silicon City or the clear orange tone given to the Badlands, it is clear that Monti put much effort into each and every panel. It’s been a long time since I have had to stop and appreciate the colors on the first page of an issue, and the quality of the coloring continues throughout the issue. I deeply hope that Monti continues his excellent work throughout the series, because it alone makes Mega Man: Fully Charged worth putting on your pull list.

The lettering of Ed Dukeshire in Mega Man: Fully Charged #1 does an outstanding job of helping the story continue its intended flow. Each instance of lettering is done well enough that the readers feel like they are experiencing the story and dialogue rather than just reading off of speech bubbles, and color-coordinated captions allow for easily distinguishable inner thought from a character.

This is the Mega Man comic we need right now. The original series of games are fantastic, but their stories have always been kept simple, and comic adaptations had to take that story and add a lot of substance to it. In Mega Man: Fully Charged, an entirely new story is being told with elements from the original series, and I couldn’t be more excited for what is to come. Mega Man is an iconic character, and this first issue makes it very clear that Marchisello, Rinehart, Simeone, Monti, and Dukeshire will do him justice.

Are you a Mega Man Fan? Let me know in the comments below!