Andy, a.k.a. Aquaman, is nothing if not resilient in his quest to find his true identity. The recent events with the Old Gods helped him realize his true power, which stoked a desire to unearth his past life’s secrets. Andy’s entire world is about to turn upside down as he begins his solitary search for his identity. But will this amount to a fruitless endeavor, or will he find the keys to his true identity?

Kelly Sue DeConnick’s memory loss storyline throughout these past few issues has proved to be just the kind of reinvigorating does of excitement the character needed. It’s a deep dive into Aquaman’s roots that old and new fans can appreciate. The previous “Mother Salt” arc was focused on helping him realize his powers once again, and this next journey appears to be setting him up to use them. 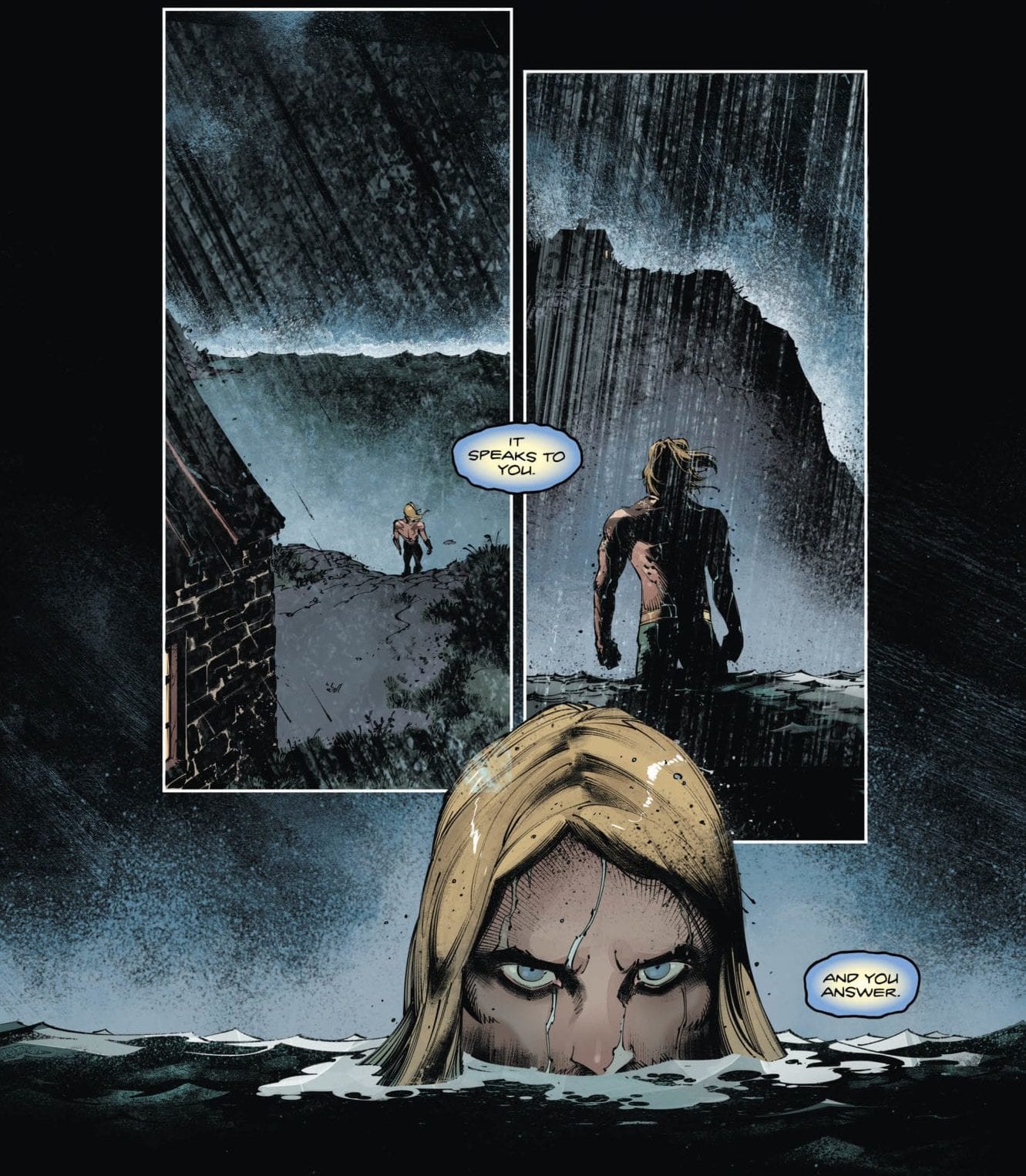 After a hefty dose of encouragement from the Old Gods, as well as a questionable ritual, Andy sets out into the great wide ocean. Everything appears to be figments of a dreamlike state until the colossal Mother Shark makes her grand appearance. Like Mother Salt, Mother Shark is an elemental deity who helps the ocean’s deceased pass on to the afterlife. This should have been the case when Andy was presumed dead in the Drowned Earth event, but the goddess reveals she has other plans for him.

DeConnick’s Mother Shark weaves together some of the most impactful moments during Andy’s life as Aquaman. The reader is drawn into the hero’s history, catching glimpses of his most important moments. It’s clear the main purpose of this comic was to give readers reasons to be an Aquaman fan, and in this respect it does not disappoint.

Viktor Bogdanovic’s penciling and inking, collaborating with inkers Jonathan Glapion and Daniel Henriques, adds effective definition to Andy by employing detailed lines to frame his features. This is coupled with their heavy shading and Sunny Gho’s coloring to illustrate Andy’s descent into the ocean’s depths.

Clayton Cowles’ lettering shines through spectacularly, especially in Mother Shark’s speech bubbles. Their squiggled border and bright blue hue gives the impression of an actual bubble, signifying her connection to the ocean.

Heniques and Alex Sinclair’s main cover features Mother Shark in her mighty glory. The menacing look to the creature makes the reader believe her motives are nefarious, fueling common themes of ocean fears. Josh Middleton’s variant, much like his versions from previous issues, features Aquaman alone. But this time he’s holding his trident to show how much he’s grown into his former heroic status since losing his memory.

AQUAMAN #48 takes readers on Andy’s journey of self-discovery, highlighting the best aspects of his character. They’ll enjoy finding out what truly makes him worthy of being Aquaman.

What ultimate role do you think Mother Shark plays in this storyline? Let us know in the comments below!

Review: Meet Mother Shark, The Ocean's Memory Holder, In AQUAMAN #48A deep look into Aquman's history and the best aspects of the hero.