Review: Matt Murdock Takes On The Ruling Elite In DAREDEVIL #17

DAREDEVIL #17, available in comic book stores on Wednesday, February 5th, brings another fight to Matt Murdock’s doorstep. But this isn’t a physical battle; Matt’s abandoned his old ways (allegedly) and is seeking to deal with the root of Hell’s Kitchen corruption, rather than the symptoms. This means he’ll have to refrain from beating up poor criminals and using less violent methods to take power from the ruling elite.

Matt’s claimed to have given up his violent ways, only to engage in them shortly thereafter. Will he live up to his word this time?

In DAREDEVIL #16, Matt and Elektra stole billions of dollars from the Storwyns, a corrupt family business who’s been systematically destroying Hell’s Kitchen. Though Elektra kept a billion for herself, she sent the rest of the money to nonprofits, clinics, and small businesses throughout Hell’s Kitchen. Her motives weren’t entirely pure, but this act helped Matt believe he could fight for the city without using violence. 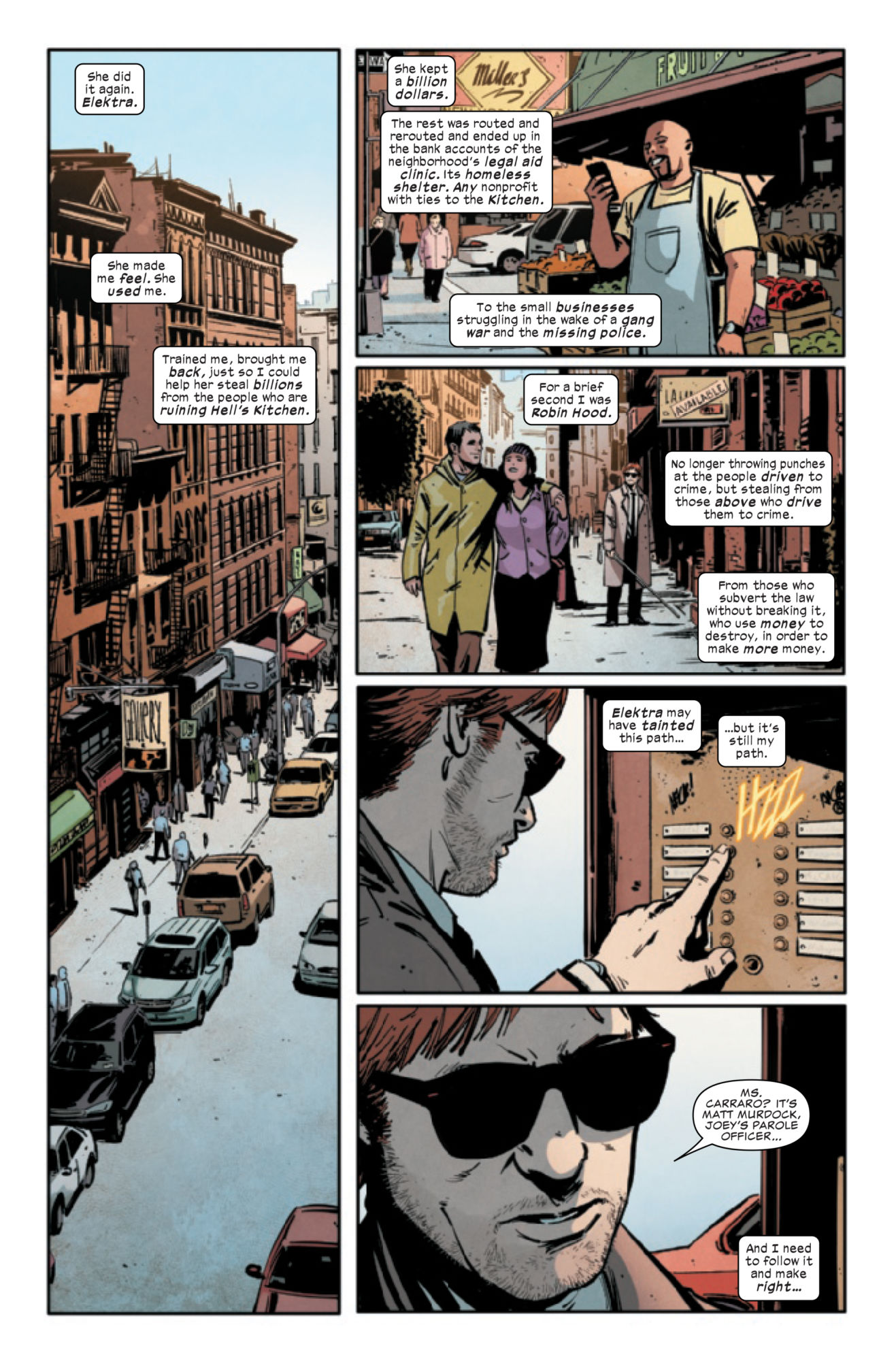 Before staging his next heist against the Stormwyns, Matt pays a visit to Ms. Carraro, the mother of the man he accidentally killed at the beginning of this series’s arc. He offers her some of the money acquired as recompense, but she declines it. What’s more, she claims she knows it was him who murdered her son.

In this moment Matt begins to feel the guilt of his life as Daredevil surround his soul. Yet in an unexpected turn of events, Carraro forgives him. And just like that the waves of guilt begin a slow process of washing away, further solidifying his commitment to a less violent campaign against the forces of evil in their city.

The illustrations with this issue gives readers an effective take on live in a neighborhood like Hell’s Kitchen. Jorge Fornés’s penciling and ink work, along with Nolan Woodard’s coloring, captures the highs, lows, and general lifestyles of the city’s citizens. Readers get to see the fine architecture of rooms owned by the elite class, the sketchy bars used for meetings of the competing mobs—even the meager conditions of poor families like the Carraro’s.

In addition, VC’s Clayton Cowles’s lettering makes it easy for readers to tell both who’s speaking and whether or not their dialogue is internal. However, it would have been good to see more variance in style here.

DAREDEVIL #17 takes readers on a journey into Matt’s consciousness; more so than ever in this run. We see him deal with guilt in a way few humans could possible manage, inspiring those of us who are unnecessarily hard on themselves.

Do you think Matt’s new method of crime fighting will stick this time? Let us know in the comments below!