The fate of Kate Pryde is finally revealed in Marauders #11, released by Marvel Comics on August 12! Writer Gerry Duggan, artist, Stefano Caselli, colorist Edgar Delgado, and letterer VC’s Cory Petit bring readers another issue of what is easily one of the strongest X-titles currently being published.

This issue begins with a tender moment, with Nightcrawler writing a letter Kate while she’s “away” in order to keep her in the loop of all the goings-on around Krakoa. The X-Men then hold a ceremony for Kate, and a sense of sadness hangs over the book. That sadness quickly turns to anger, however, when Lockheed returns, and Emma Frost discovers that Sebastian Shaw betrayed Kate. Rather than take this discovery to the Quiet Council, Emma keeps it to herself, setting up a future (and probably ongoing?) conflict in the series moving forward.

Finally, the moment readers have waited for finally happens…Kate returns! The mystery of how to resurrect her is uncovered, and hopefully, this will move the narrative one step closer to revealing why she can’t go through the Krakoan gates.

Again, this is a solid title, with a well-paced story, and a lot of good character moments and interactions. Readers will have to wait for the fallout of Kate’s murder by one of her fellow mutants and Hellfire members, as well as for the significance of the B-plot involving Storm and one of the agents of the X-Desk.

The art team crafted a gorgeous issue filled with some beautiful and poignant imagery. One image that particularly stands out comes at the beginning of the book, with Kate’s body being shown. 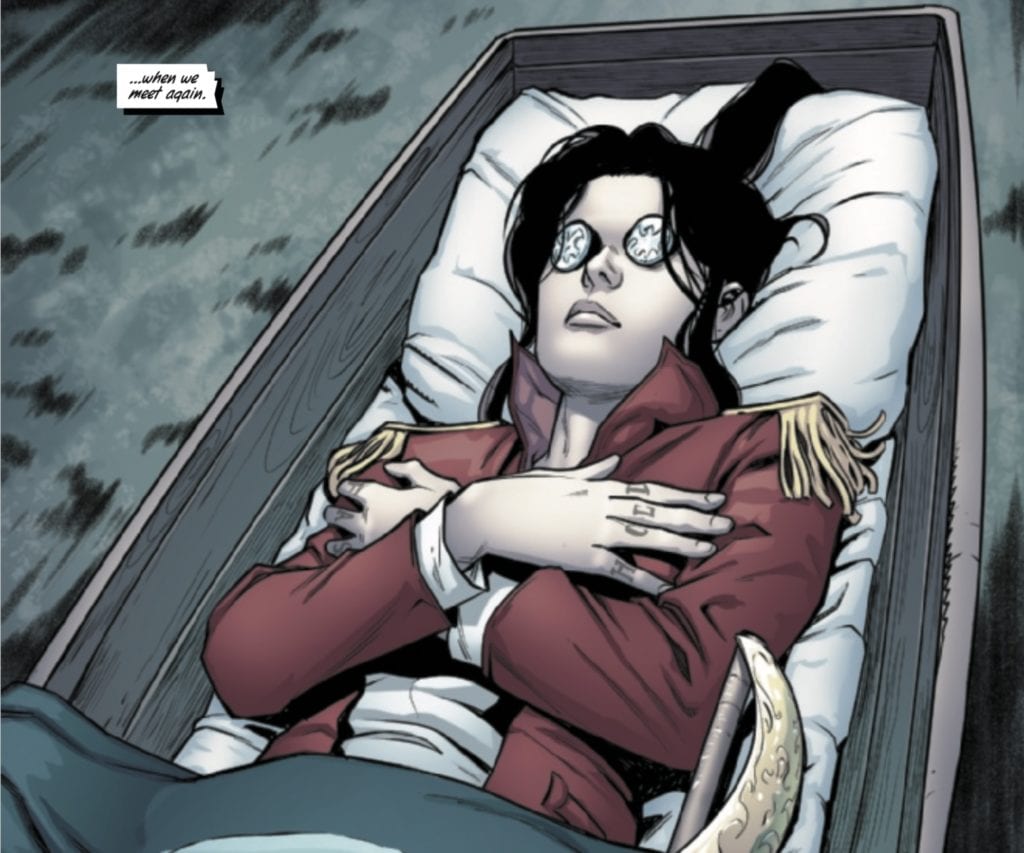 There has been a sadness hanging over this book, and a general sense of uncertainty hanging over the X-titles, ever since Kate’s death. This image drives that home, particularly given reader knowledge of the circumstances of her death.

Given the themes of life and death in this issue, it is only fitting that the next image to highlight comes from Kate’s rebirth, beautifully colored by Delgado. 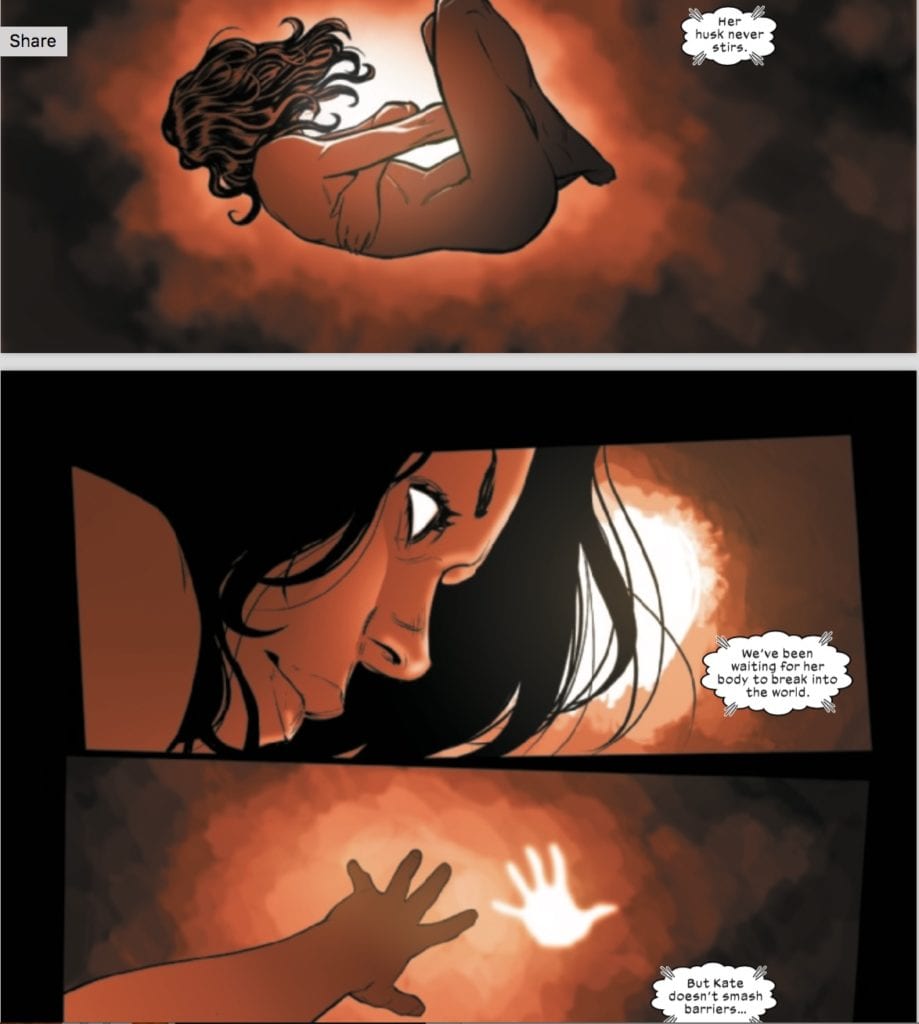 Caselli and Delgado complement each other very well here, with the fetal imagery and ambient lighting working in tandem to show us Kate’s fetal state before she can phase through the egg.

Again, thematically, it is beautiful that this issue is bookended by the themes of death and rebirth, subjects that the art team can skillfully convey.

In an issue full of some tender moments, one of those moments is used as a framing device to begin the issue: Kurt’s letter to Kate. Kurt’s words establish the tone for the entire book as sad but hopeful. Petit’s letters are well-done here as he overlays the images with Kurt’s letter to his dear friend. Particularly worth of note is how the lettering provides a nice touch to the image of Kate’s dead body (noted above) by simply stating, “when we meet again.”

It’s a heartfelt sequence, and Petit does a beautiful job working in tandem with the art team to add a nice verbal flourish. In an issue mourning the death of a teammate and friend, all of Petit’s letters operate that way, not overwhelming the scene but appropriately accentuating the scene when needed.

It’s good to have Kate back, and moving forward; it will be interesting to see how the conflict with Sebastian Shaw will play out. Will he eventually meet the same fate as Sabretooth, exiled below the surface of Krakoa for his crimes? Or will Kate and Emma be able to put him under their thumb? And has a new relationship with the X-Desk opened up future avenues for cooperation, or is there a conflict being foreshadowed with the U.S. government?

What did you think of Marauders #11? Tell us in the comments below!

Kate Pryde's fate is finally revealed, and Storm has a heart to heart with a member of the X-Desk.Review: MARAUDERS #11 - Kate's Fate Revealed!