Review: Making Deals With Eldritch Folk In THE DREAMING: THE WAKING HOURS #7

Writer G. Willow Wilson and artist Javier Rodriguez return for yet another chapter of their brilliant Sandman Universe series with The Dreaming: The Waking Hours #7. This issue, while still wholly entertaining, serves more as a transition point between two places in the story rather than a major event in and of itself. However, it still offers great moments of emotional character writing and plenty of well-earned appearances by classic Sandman characters. With this sharp writing and yet again solid (although a tad inconsistent) visual work, this is yet another great chapter in this part of the Sandman mythology.

“Bleeding out in a hospital bed from a magic wound that will not heal, sorceress Heather After must swing open the gates of reality to find herself a protector…but is she prepared for the deal she’ll have to strike once she finds a champion with the dangerous power she needs? And speaking of dangerous power…what happens when Matthew the Raven catches a glimpse of one of the artifacts Heather’s been hiding away?” 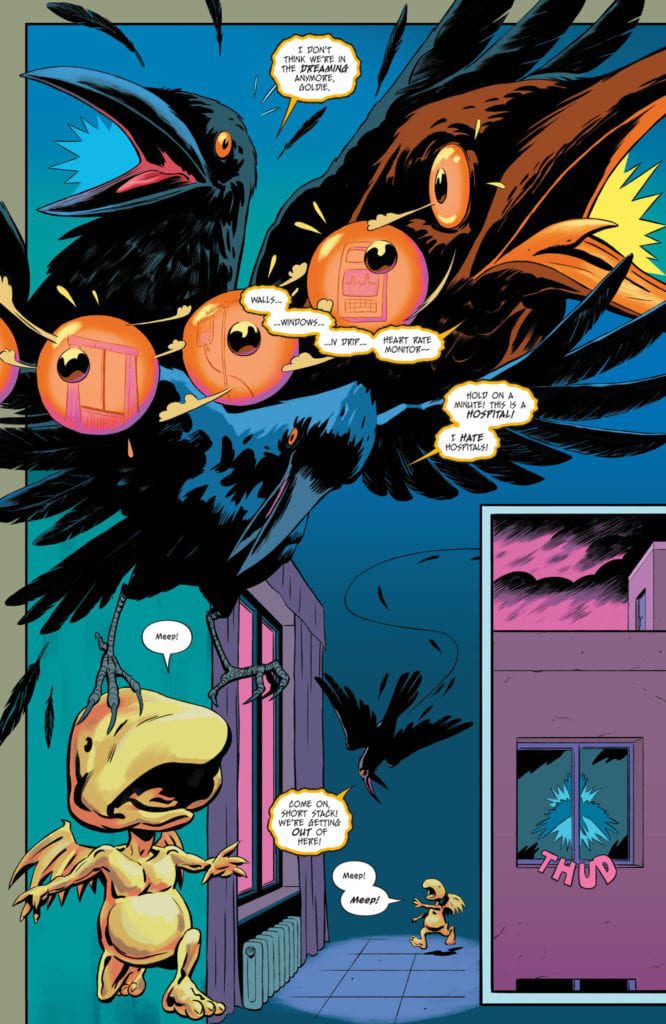 G. Willow Wilson has a mastery when it comes to the pacing of this story, so The Waking Hours #7 feeling a bit more like a catching-up chapter rather than a major event feels like a genuine step rather than a misfire. Heather After is recovering from her injury at the hands of Puck and weighing her options, while also dealing with the fact that she unintentionally summoned a talking raven and a baby gargoyle to help her out of her crisis. There are still hugely important moments in this issue (including the summoning of another very important figure from the land of Faerie), as well as more sweet and heartfelt character writing. Heather’s lovable and caring himbo boyfriend is quickly becoming one of my favorite characters in this series. Wilson’s sense of dialogue and narrative is once again a brilliant mix of naturalistic and poetic. There are moments of dialogue that had me chuckling with great character quips, and plenty of scenes that kept me wholly invested in the story and all of the rising stakes in this story. This chapter clearly is setting up where we are headed in this tale of dreams and magic, and I’m sure it will be a journey worth taking. 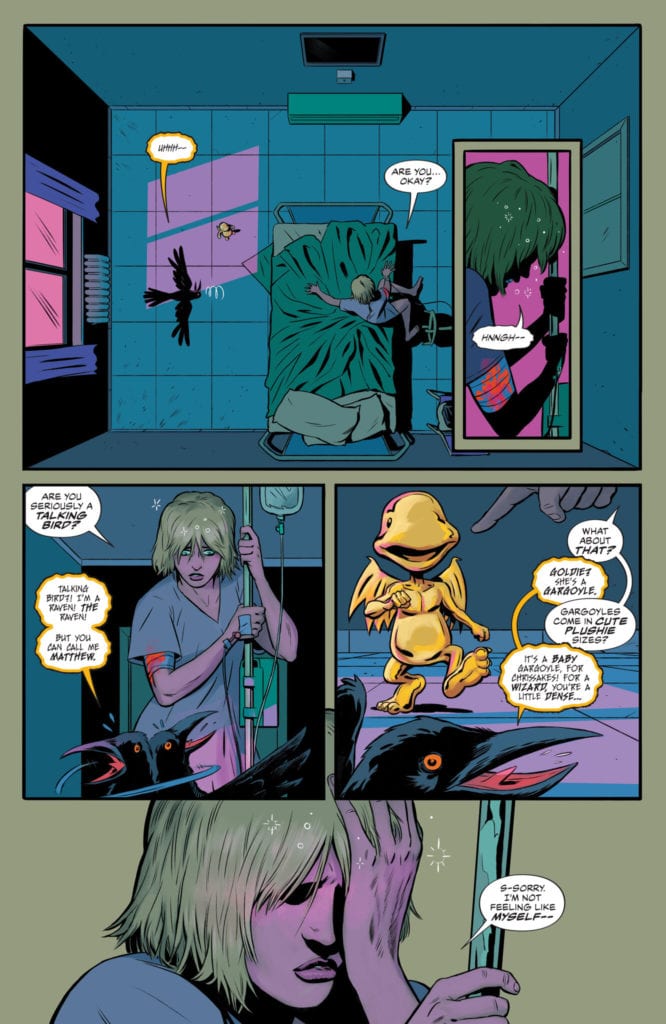 I was pleasantly surprised and more than a little relieved when I saw that new The Waking Hours artist Javier Rodriguez was up to the task of taking over Nick Robles’s spot in the last issue. While his pencils here on issue #7 are still mostly very good, it’s hard not to notice that there are points where the visuals seem a bit rushed. For the most part, Rodriguez’s pencils are alive with detail and fluid animation. Every room and piece of ethereal architecture, and every mythical monster are all drawn with a stunning eye for detail and imagination. Every page of this comic looks like a true Sandman comic, with people and things that are impossible to think of come to exist in the pages in grand fashion. The general high quality of work makes it all the more noticeable when the pencils miss the mark by just a hair. There are some images that look to be of notably lesser quality, with wonky character features making themselves distractingly obvious. Much of the visual integrity and wonder is due to the colors of Mat Lopes, who has been offering his talents since the Si Spurrier Dreaming series that preceded this run. His work here and as it always has been is wildly vivid, with a massive variety of tones and shades. The deep purples and blacks of nightmarish sequences will quickly turn to bright neon blues and pinks, followed by the luminescent gold of looking upon a fallen angel’s true form. The letters from Simon Bowland once again nail the Sandman aesthetic of shifting fonts for the myriad characters while staying unobtrusive and easily readable. An overall solid, if not slightly inconsistent effort from the visual team. 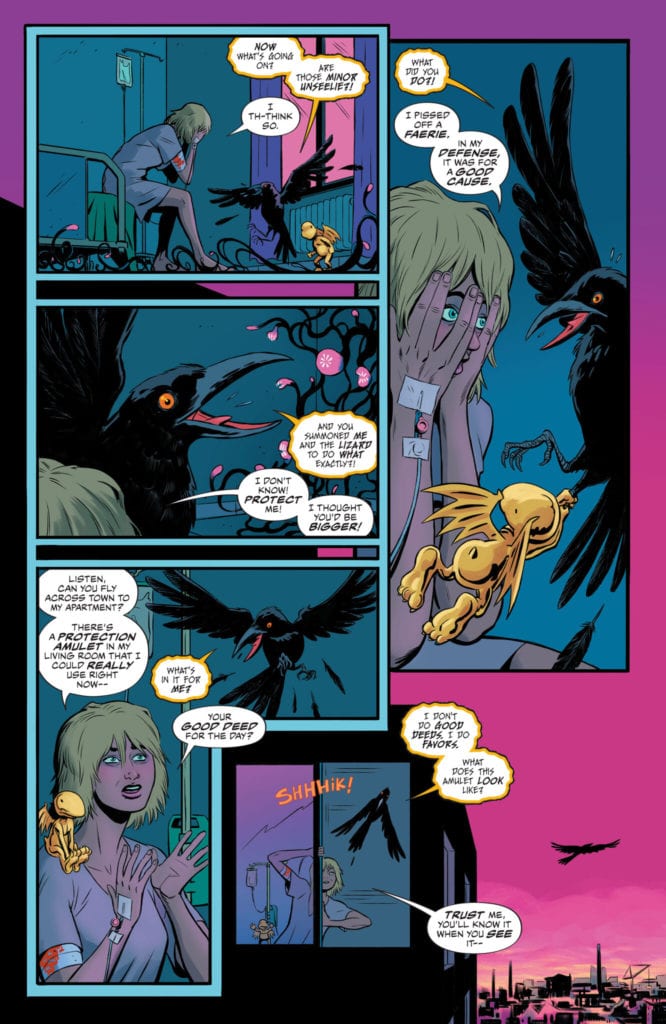 The Dreaming: The Waking Hours #7 is a completely entertaining comic with its own set of twists and character reintroductions that is mainly concerned with pointing the reader in the direction of the future. G. Willow Wilson’s script of sharply paced and lined with great humor, stellar character writing, and meaningful plot-directing. The visuals from penciler Javier Rodriguez and colorist Mat Lopes are almost entirely fantastic despite what appears to be a bit of rushed penciling at points. This is another excellent chapter in the Sandman Universe, and I highly recommend you pick this one up when it hits shelves on 2-2!

A chapter that serves more as a transition point rather than an event in and of itself, filled with familiar characters, sharp writing, and solid (if not slightly inconsistent) visual work.Review: Making Deals With Eldritch Folk In THE DREAMING: THE WAKING HOURS #7